BACK TO ALL NEWS
Currently reading: Facelifted 2020 Jaguar F-Type to be revealed today
UP NEXT
Analysis: do EV charging firms need government support?

Jaguar will reveal the facelifted version of its F-Type this evening (Monday), in an event supported by model car firm Hot Wheels.

The new sports car, due on sale early next year, will gain refreshed styling and upgraded technology and has already been seen testing in camouflage livery in recent weeks.

UPDATE: The Jaguar F-Type has been revealed - full story here

Jaguar confirmed the launch date with a short video on social media recently, which also said the event would be held 'in partnership with Hot Wheels'. The teaser video features a Hot Wheels track loop, suggesting the new F-Type could undertake a similar stunt in reality.

The most recent spy shots of the F-Type, taken near JLR's technical HQ in Gaydon, show the restyled front end more clearly, with a new clamshell bonnet, a more prominent grille and slim, angular LED headlights mounted lower down the nose.

The rear retains the same vertical bootlid but gets new wraparound tail-lights and a reshaped bumper. A quick glimpse at the interior doesn't reveal much, but it looks like the infotainment has moved on a generation, while the rotary climate control display remains. 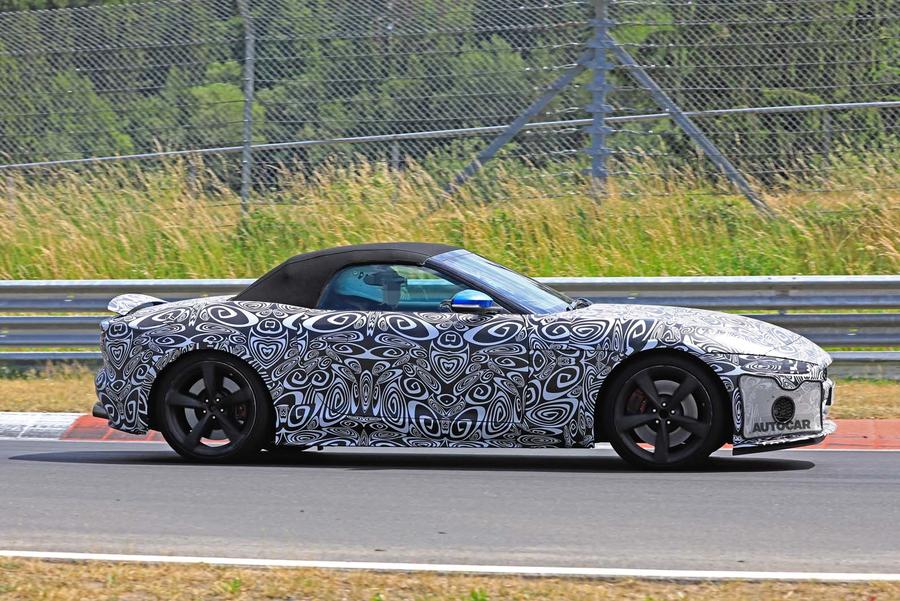 It's expected that much of the more advanced technology and infotainment features from the electric I-Pace and updated XE will make its way into the F-Type. That means new digital dials, a larger and more feature-laden touchscreen and substantial upgrades to the materials.

JLR is now phasing out its long-running supercharged V6 in favour of a new turbocharged and hybridised straight six, and the F-Type will benefit from this more efficient powertrain. The turbocharged four-cylinder and supercharged V8 engines should be carried over to the new car with limited changes, however. Indeed, this prototype registers as a 5.0-litre V8, putting paid to rumours JLR would bring in a BMW-sourced 4.4-litre unit. 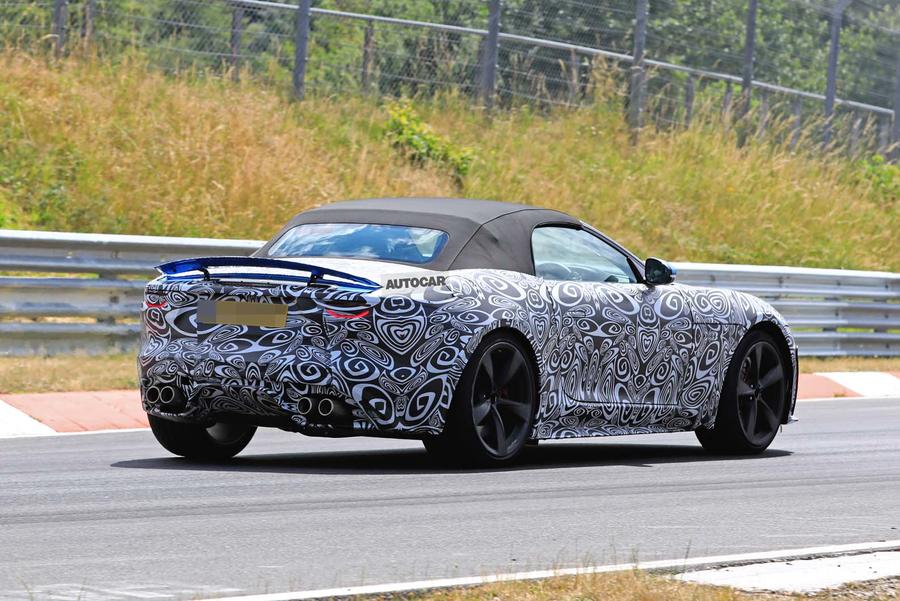 What remains unclear is whether the new F-Type will continue to offer a manual gearbox. The current V6 is still offered with one in the UK, although it has reportedly been removed from sale in the US. Regardless, manuals account for a tiny fraction of F-Type sales.

Big updates for Jaguar XF and F-Pace to follow XE

Launched in partnership with Hot Wheels - a manufacturer of chavvy looking toy cars? For the launch of a serious "premium" sports car?

Nope. JLR news is micro managed by Autocar. Can be seen to be pissing on the bonfire.

Nope. JLR news is micro managed by Autocar. Can be seen to be pissing on the bonfire.

JLR has a real gem on their hands.  Ian Callum's original design should not be tinkered with.  Fender would never re-design Leo's Stratocaster or P Bass.  Gibson would never redesign Les's Les Paul.  Even Jaguar of yore didnt mess with the E-Type...well at least not that much.  Is this why Ian is no longer with JLR?  Did they mess with his design?  With Jaguar, all they have that is organic and differentiates the brand is their heritage.  I can't really point to any innovations outside of Formula E program and the wrongly named I-Pace.  As an owner of two F-Types in as many years, I believe they can dramatically improve the car without messing with Mr Callum's masterstroke design.

A rear wheel drive V6S with manual trans and no heavy options like power hatch and extra electric motors in the fancy seats or glass panoramic roof only weighs 3455 Lbs.  They can easily get the manual F-Type V6 S into 33xx Lbs range and perhaps 3290 for the 4 cylinder turbo.  Why they are not looking at lowering unsprung weight with a lighter brake, wheel and tire package is beyond me.  Defiantly, low hanging fruit for the factory while also making the car more appealing to sports car drivers/customers.  Furthermore, the exhaust is very heavy and could also be lightened up.  Perhaps, another 25 Lbs without exotic materials.  Some more Dynamic modes to lower body roll during hard cornering would also be a welcome improvement.  Since the V6 S block is the same as the V8 and Eaton clearly states there are more unused RPMs available in their supercharger on the V6 S.  JLR should be able to easily and reliable bump the tune to 425 HP and 375 ft Lbs of torque.  This is exactly what many F-Type owners who enjoy driving are doing to their cars.  Actually, some V6 S owners are getting 450 hp without reliability issues.  The rational behind all this is to have a better power to weight ratio, so the AWD V8s are a lost cause for a sports car at nearly 3900 Lbs.  The V6 S can be a proper sports car with small improvements and 100-150 Lbs diet plan.  JLR would be well served to communicate with aftermarket tuners such as Velocity AP, RaceChip, Viezu, Paramont Performance, Arden, Hennessy and Wortec brakes.  All these companies have developed performance upgrades for F-Type and sell them!  Perhaps, JLR should follow Ford's example with Rouch and Shelby, which have factory dealership support.  This would sell more F-Types than any new front bumper assemblies or new infotainment package.  Oh, one last request JLR,...please add an actual sun visor to the interior!!!