Retro-styled roadster looks set for a second-gen revival, and all the signs point to a heavy overhaul
Close

Morgan has begun testing a substantially overhauled second-generation version of its lightweight 3 Wheeler roadster, as it prepares to wind down production of the current car this year.

Autocar has obtained an exclusive image of a prototype being put through its paces, giving us a first look at how the Malvern manufacturer will update the diminutive 3 Wheeler, which remains similar in its concept and design to the Morgan Super Sports launched in 1933.

Most obviously, one of the current car's defining features, its front-mounted V-twin engine, has been removed. Morgan previously confirmed that the outgoing car's 1998cc motorcycle-derived 82bhp aircooled engine - supplied by American manufacturer S&S - would become non-compliant with emissions regulations in 2021, but has not yet detailed its replacement. Irrespective of output, Autocar understands the engine will continue to drive the rear wheel exclusively.

It is now two and a half years since Morgan shelved plans for a pure-electric version of the 3 Wheeler, citing problems with its powertrain supplier and vowing to bolster its EV development capabilities by bringing "additional specialist resource in-house". It remains unclear whether this second-generation car could spawn a zero-emission variant.

With no engine elements on show, it appears the next-gen 3 Wheeler's powerplant will be housed, more conventionally, in the bodyshell itself. That means it's likely to be larger than the current two-cylinder unit and, as is the case with the other models in Morgan's range, will likely be sourced from a third-party manufacturer. 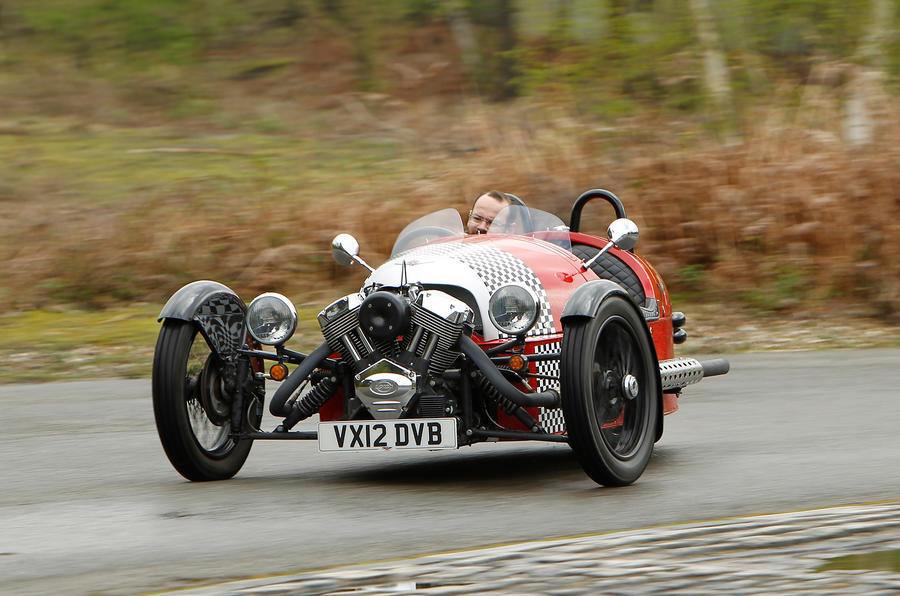 BMW currently supplies engines for Morgan's four-wheeled sports cars, but the smallest is a 2.0-litre turbocharged four-cylinder taken from the Z4 sports car, and would almost certainly be too large for the 3 Wheeler's shell.

Beyond that, we can see clues as to a subtle redesign for the brand's smallest model. With the engine relocated, it looks as if Morgan will introduce a more streamlined front end, although the front wheels will remain exposed while the rear wheel is enclosed within the tail of the car. However, the roll cage pictured here is for testing purposes and won't make production.

More significant are the apparent revisions to the 3 Wheeler's chassis. With the front track visibly widened, we get a good look at what seems to be a much more advanced suspension set-up, while the vented brake discs at the front have been substantially upsized, all of which points to a more overt handling focus and potentially a power increase for the 3 Wheeler.

The new 3 Wheeler is expected to be shown in full towards the end of this year, ahead of an international market launch in 2022.

Morgan 3 Wheeler: a year behind the whee​l

Clearly if they have removed the engine it is electric!

Putting the engine under the bonnet would mean there was nowhere for your legs!!

I'd have thought this car would be a prime candidate for EV power?, you can go far with it, it's not a Holiday car, so, even its range was only 100 miles, that would be enough,but, would it be more or less exciting to drive?

Back wheel sticks right out beyond the bodywork. Looks like a Polaris Slingshot arrangement.