BACK TO ALL NEWS
Currently reading: New Morgan Plus 8 GTR confirmed for 2021
UP NEXT
Drawing fire: We talk to BMW's design director

New Morgan Plus 8 GTR confirmed for 2021

A special-edition Morgan Plus 8 GTR will be built this summer, three years after production of the standard car officially came to an end.

Morgan says the GTR will be a “gloves off” version of the Plus 8, with the project made possible after several chassis earmarked for a discontinued external project were reacquired from a third party.

Only nine examples of the Morgan Plus 8 GTR will be built, but the British firm is set to reveal several other special edition models in 2021.

Power will come from a 4.8-litre BMW N62 engine, although Morgan has suggested that output from the recommissioned units will be higher than the 362bhp achieved in their original specification. Six-speed manual and automatic transmissions will be offered, although allocations for these are fixed for the production run.

The chassis are completely unused, having been built by Morgan before 2018. The company says some mechanical components will be upgraded for use in the Plus 8 GTR.

"Reviving a V8-powered Morgan at the current time may not seem like the obvious choice for a manufacturer firmly focused on new platforms and powertrains,” said Morgan’s head of design, Jonathan Wells. “However, when the opportunity presented itself to recommission a number of rolling chassis and create an exciting special project such as Plus 8 GTR, we embraced it fully. 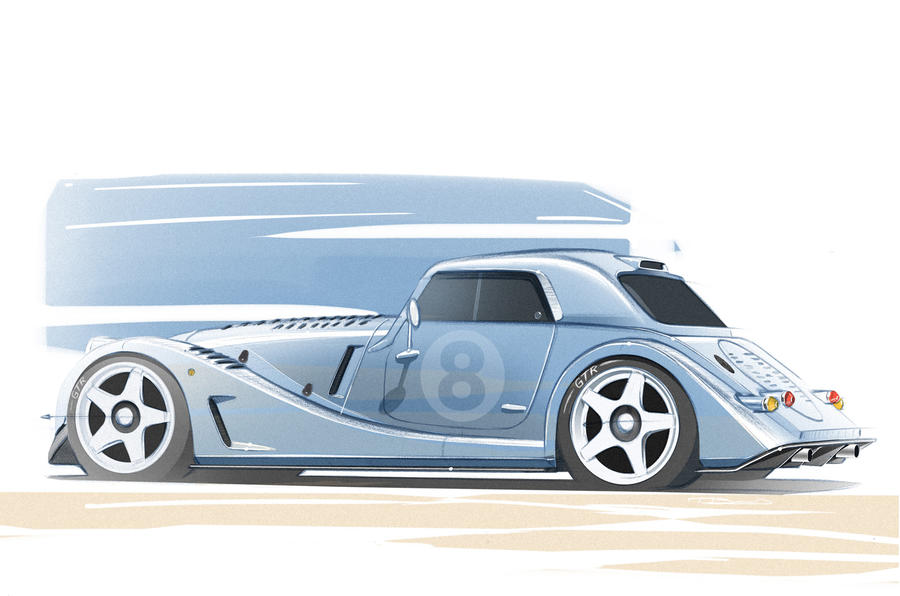 “This project has allowed Morgan’s design and engineering teams to revisit some of their favourite elements of past Morgan models, as well as experiment with some features that we hope will appear on future Morgan cars.”

Morgan’s design and engineering teams have been told to “let their imaginations run wild” for the GTR, with inspiration coming from the ‘Big Blue’ GT series racer of the 1990s. That vehicle was used as a test bed for the bonded-aluminium chassis tech that later replaced Morgan’s traditional steel chassis in 2004.

With a full unveiling due before the car enters production this summer, sketches show the GTR sporting a high shoulder line “not seen on a traditional Morgan body for decades”.

The wheel arches have been resculpted and the five-spoke centre-lock wheels are a nod to the Plus 8’s racing heritage. The rear end, front wings and front splitter have all been reworked, with a hard-top replacing the original fabric item.

Every example of the GTR will be handcrafted using traditional coachbuilding techniques, but in a break from tradition, production will take place at the Morgan Design and Engineering Centre (M-DEC) rather than at the Pickersleigh Road factory.

Customers will be given the chance to create a bespoke Plus 8 GTR with the help of Morgan’s design team.

Ex-Bristol chassis ? What is the mater with this website ? how can this post possible be rejected for "Spam controls" /

Road or Track or both?, while having GTR stamped on its rear seems at odds with the cars heritage, it just feels a bit flat cap and leather elbow patches to me, a shape that's out of date, only built for those that remember them from there Hay day?

Road or Track or both?, while having GTR stamped on its rear seems at odds with the cars heritage, it just feels a bit flat cap and leather elbow patches to me, a shape that's out of date, only built for those that remember them from there Hay day?

Where have you been these last 100 years? They always look like this