BACK TO ALL NEWS
Currently reading: How an icy crash led to the invention of electronic stability control
UP NEXT
Rimac Technology to develop EV tech as standalone company

More than a million people are alive today because Frank-Werner Mohn invented esc while sitting in an icy ditch. We track down its birthplace
Open gallery
Close

The guardian angel that constantly monitors steering wheel angle, tyre grip and the behaviour of cars in corners may be taken for granted these days, but it is widely regarded as the biggest advancement in road safety since the introduction of the seatbelt. Yet few of us realise that it was invented literally by accident.

In 1989, a young Mercedes-Benz engineer, Frank-Werner Mohn, skidded off an icy road in the north of Sweden during winter testing. Sitting in a ditch waiting for a tow truck to be summoned from the nearest town (mobile phones were still an emerging technology back then), he had a brainwave. 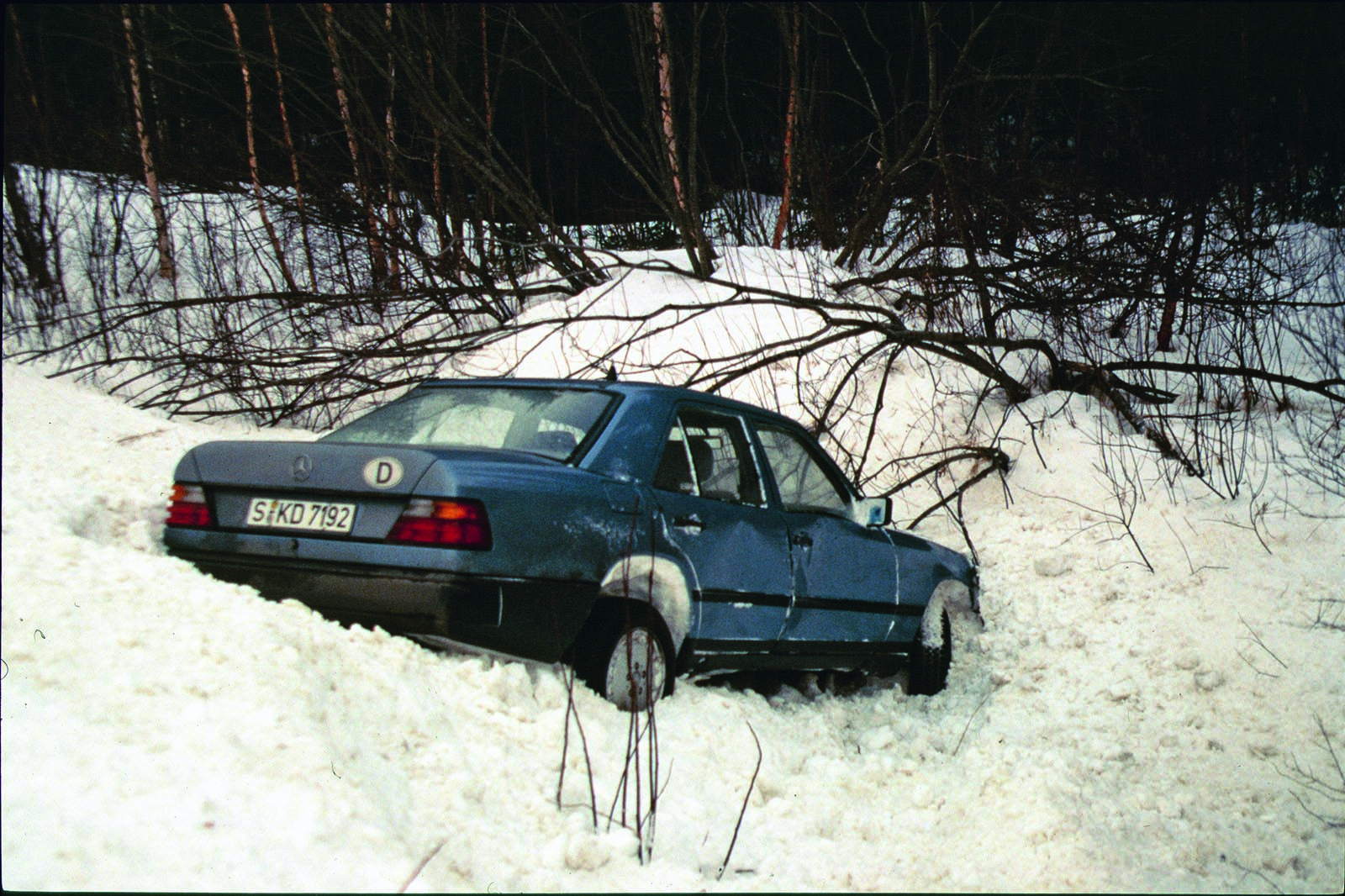 What if the recently invented anti-lock brake system – which rapidly pulses brake pressure to prevent locking up – could somehow ‘talk’ to an on-board computer that measured in milliseconds the angle of the steering wheel and the slip angle of a car?

The idea: to moderate engine power and/or activate the brakes on each individual corner to help prevent a skid. Supplier Bosch had a similar idea at about the same time, but its system was activated only when the brakes were applied in an emergency. Mohn’s idea was for the system to be active all the time and constantly monitor road conditions and the attitude of the car. This subtle but significant distinction led to Mohn’s idea becoming the basis for all electronic stability control systems used today.

Once back at headquarters in Stuttgart, Germany, Mohn and his team of engineers were given permission to build a prototype to test their theory. 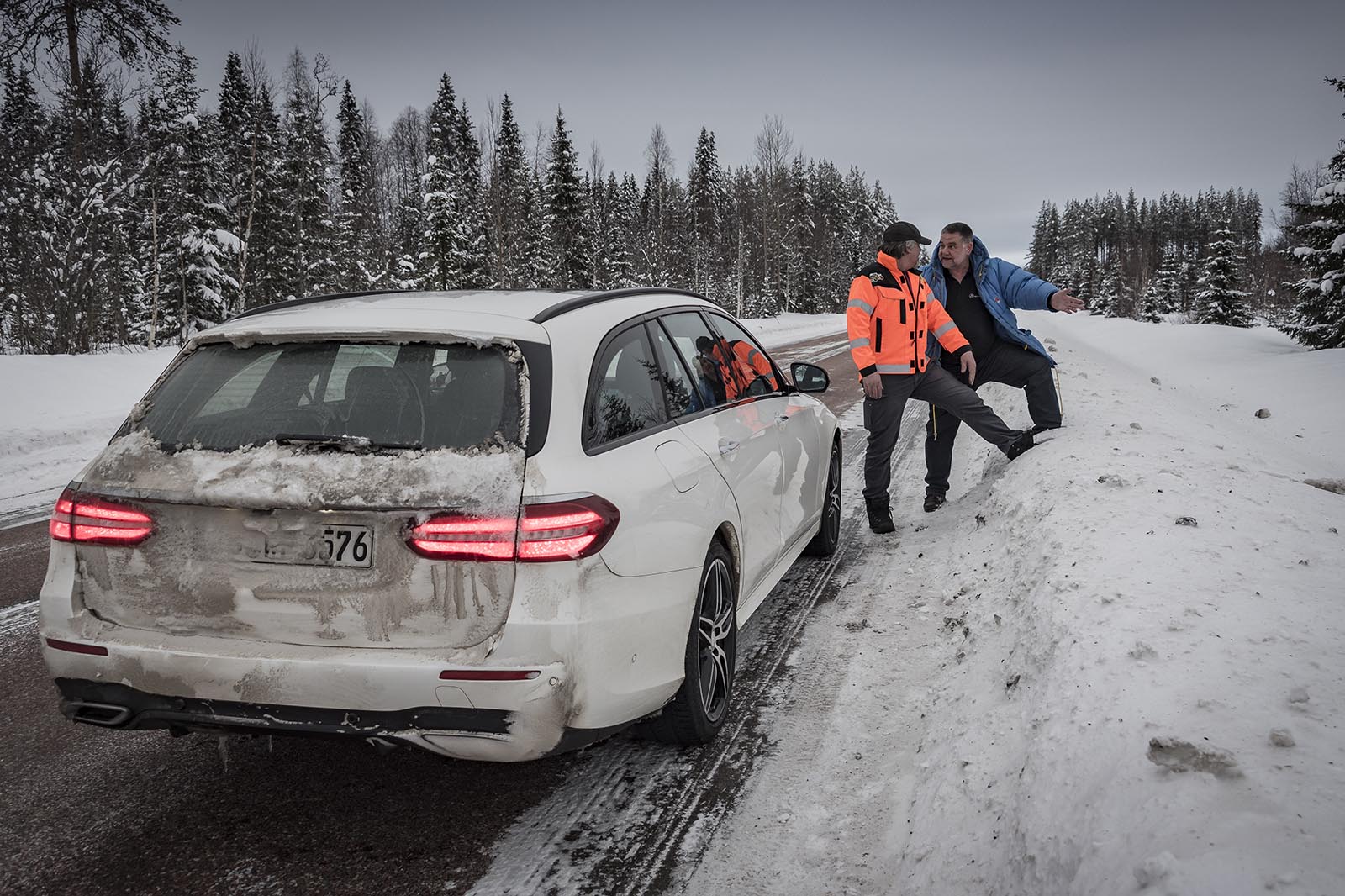 The first challenge was to find a gyro sensor that could measure sideways movement. So they went to a toy shop and bought a remote control helicopter, dismantling it to get this precious part.

Eventually, they proved the theory could work but quickly discovered they needed a gyro sensor with faster processing speeds than the one in the toy. So they sourced one from a scud missile - minus the warhead, of course - to make a more durable test car.

In March 1991 – after two years of intensive development by a small but dedicated team whose idea was originally mocked by some colleagues – the technology was given the green light to go into production. That decison came quickly after one testing session, during which a top Mercedes executive, who was known to be timid behind the wheel, was almost as fast as the company’s professional test drivers on an ice lake obstacle course. When the technology was switched off, he barely made it past the first turn without skidding off course. “Once they saw this technology could safely prevent a skid while taking a corner, the board approved it at once,” says Mohn. “At the time, this was a revelation.”

Originally, the technology was installed in Mercedes’ S-Class flagship limousine in 1995. But in 1997, Swedish technical magazine TeknikensVärld flipped Mercedes’ then-new A-Class hatchback during a swerve-and-avoid ‘moose test’. Mercedes responded by fitting its new stability control technology – previously reserved for its dearest model – to its cheapest car, before eventually introducing it across the range. “We thank this journalist that he did this because it expedited the roll-out of our technology,” says Mohn.

But there were mixed emotions for the inventor when, soon after, Mercedes handed over the patents to its technology suppliers – and did not charge them one penny for it.

In the automotive industry, car companies own the rights to the inventions of the thousands of engineers they employ. Mercedes could not build the new stability control systems fast enough to keep up with demand, so it gave its know-how to other technology companies – and allowed them to sell it to rival car brands. The aim was to reduce the cost of the technology. 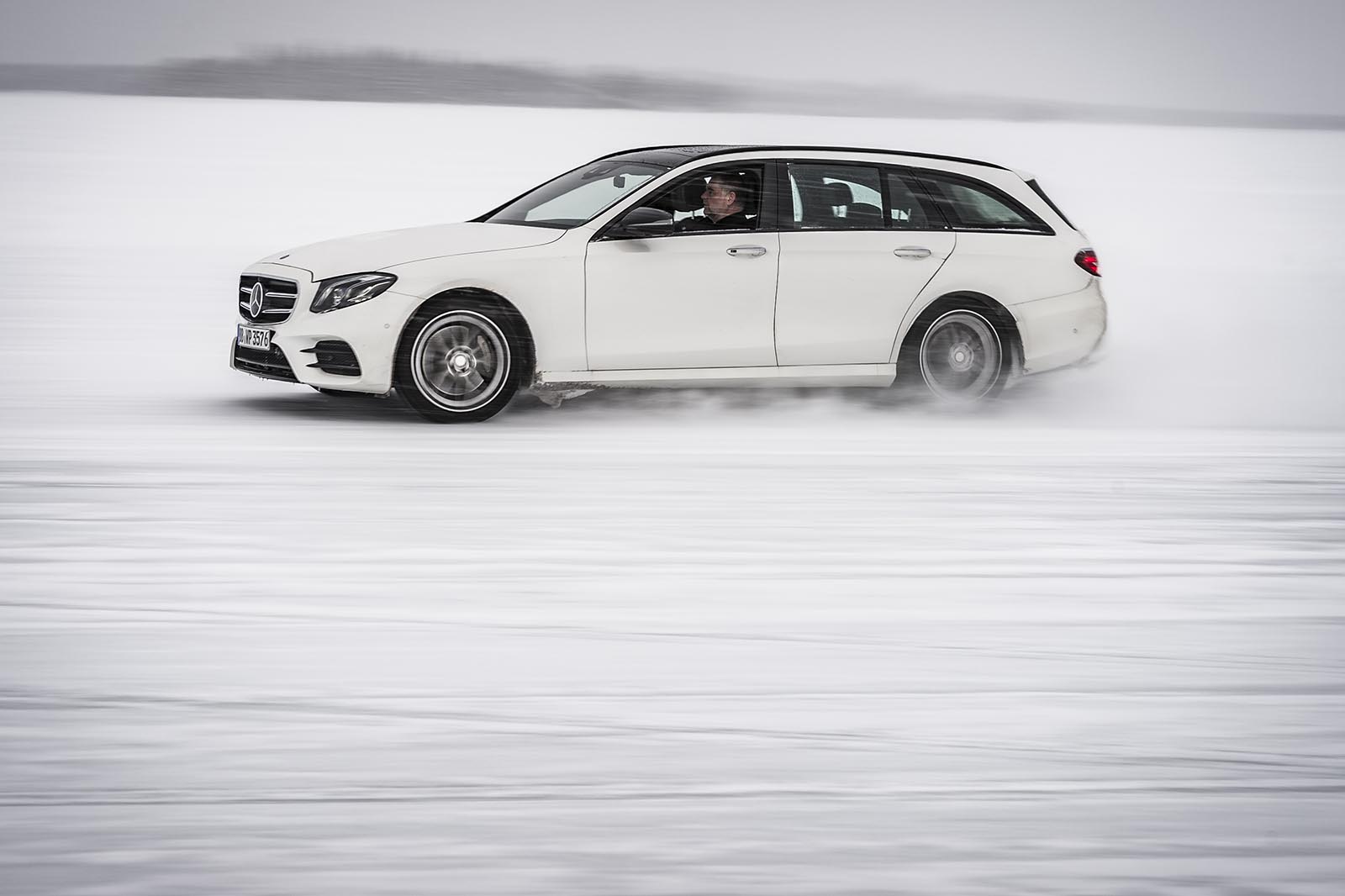 However, within 10 years, German authorities began to notice a reduction in single-vehicle fatalities in cars equipped with stability control. According to some industry experts, the number of lives saved due to stability control is now in excess of one million globally. The technology is compulsory in most developed countries and is fitted to even the cheapest new cars.

To commemorate the technology that so many motorists take for granted – which is working in the background without us even realising it – we’ve come to Sweden to try to find the crash site that changed the course of car safety.

Our journey begins in the middle of an ice lake near Arjeplog, a tiny Swedish village near the Arctic Circle whose population swells in winter as almost every major car company sets up camp here for cold weather testing.

Every Monday and Friday during snow season, more than a dozen planes full of engineers fly in and out of the small town. During the week, they drive literally in circles to make sure the cars we’ll buy in the future can save us in slippery situations – and from potentially deadly mistakes. 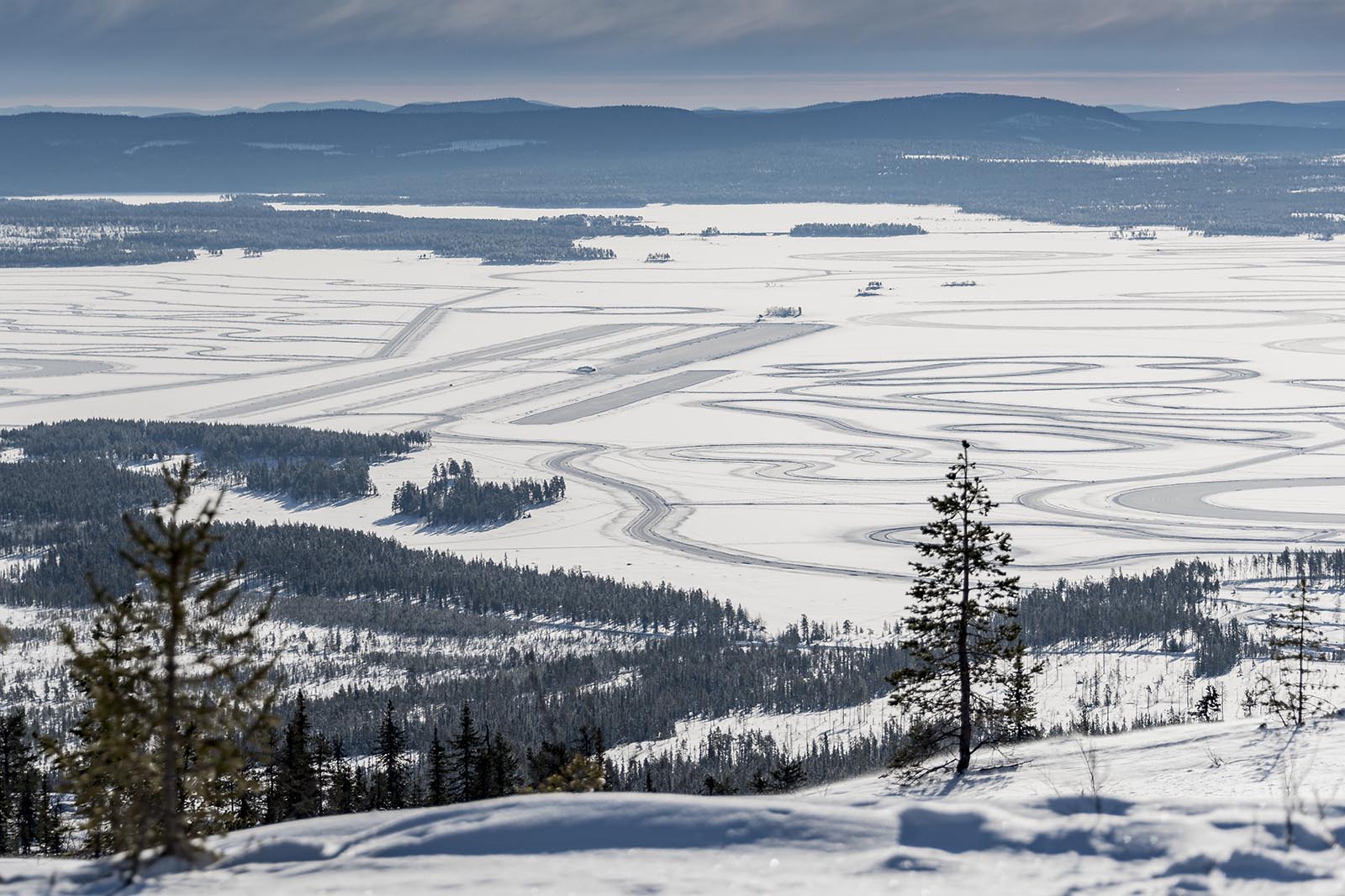 After a demonstration of the technology on a deserted ice lake as large as several suburbs, we head south towards the isolated town from which Mohn had to summon help almost 30 years ago.

The town nearest to the crash site is about 180 miles south-west of Arjeplog, but the convoys of slow-moving trucks and snow ploughs double our journey time to six hours on the icy and undulating single-lane roads. The road surface is so slippery that you can barely keep your balance when standing on it to take photos of the countless moose warning signs.

With stability control discreetly keeping us on the straight and narrow, we finally make it to Strömsund. However, covered in ice and snow, the roads and terrain in the north and the south of the town look the same.

Thanks to some divine intervention, we find the tow company that came to Mohn’s rescue all those years ago in this small community of 3500 people. The business has a new owner today, but they know how to find Tommy Bjurstrom, who, as a young lad, went to work with his dad that day in 1989 to retrieve some fancy new Mercedes.

Despite the language barriers between German, Swedish and English speakers, Bjurstrom eventually figures out why we’re here and what we’re trying to find after we produce the photos of the car from 1989 – and a young Tommy with his father and the tow truck. With that, his eyes light up and he ushers us to follow his lead.

We head about 2.5 miles south of the village to a nondescript stretch of straight road. The pavement has long since been redone and it could be anywhere else in rural Scandinavia.

Bjurstrom stops his car and waves his arm out the window. There is still a large ditch, but the big trees have been cleared from the edge of the road. It’s a reminder that the crash in 1989 could have had dire consequences had Mohn’s car come into the contact with the local habitat.

Trying to stay warm in sub-zero temperatures, the men get out of their cars and hug awkwardly in their bulky snow jackets. Mohn can’t believe that Bjurstrom has found the exact spot.

The tow truck driver can’t believe what the fuss is all about – until we explain to him what that crash led to and how many lives have been saved since.

“In my heart, I was wounded because it was my invention and it was given away,” says Mohn. “But, of course, I now see the best decision was… to make it available to everyone, to spread it out to all cars.”

What Mohn is working on now

Mohn is due to retire later this year after 35 years with Mercedes. His final project is working with his fellow engineers on autonomous car technology that we won’t see for years to come.

Ironically, the autonomous tech being developed today would not be possible without his invention of electronic stability control. 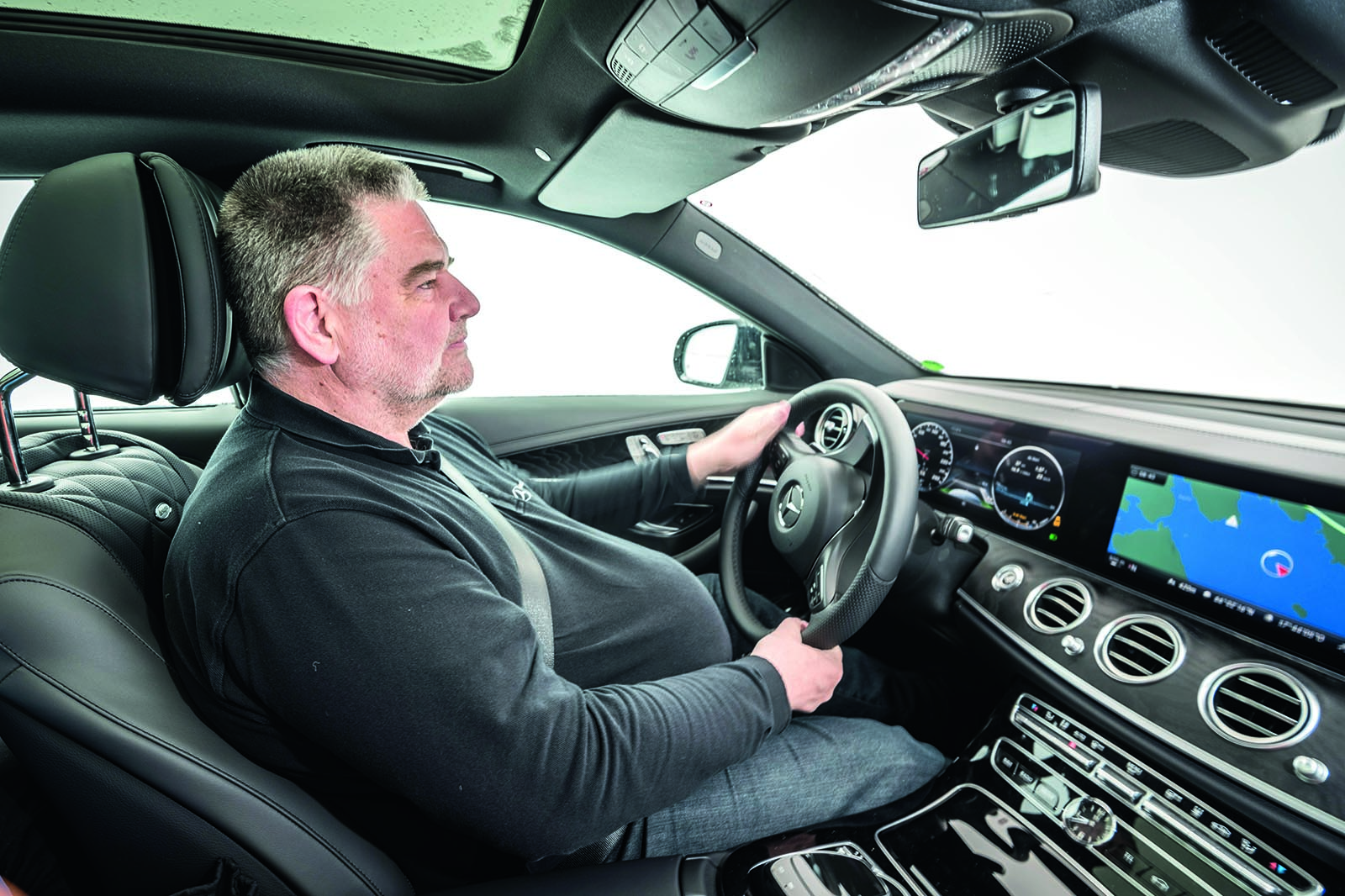 As someone who loves driving, Mohn says he understands why some people may be concerned about control being taken away from the driver.

“The driver should always be in control but, as with [stability control] there will be systems that keep you safe without the driver knowing,” he says. “Without technology, we would not save as many lives as we have already today.”

What happens to a Lamborghini Gallardo when you switch traction control off?

Thanks for an interesting read.

Thanks for an interesting read. It's not often that I share an automotive engineering piece to Facebook but I will do that with this.

Whilst the "safety partnerships" took the credit.

Police continue to persecute motorists, fining and charging people for doing no worse than they themselves do, be it going faster than the limit or using mobile phones.   Police do it all the time, but will give you a pathetic speech to you why you shouldn't.

What has genuinely saved lives is technology.   Airbags, anti-lock brakes, safety cells, and stablitiy control.   It's time we thanked the engineers!

Emmm don't want to put a damperen on things but WIKI has a more complete story that starts in 1983 with Toyota and in 1990 Mitsubish (TCL) release the Sigma which had "..engine output and braking are automatically regulated to ensure the proper line through a curve and to provide the proper amount of traction under various road surface conditions".