BACK TO ALL NEWS
Currently reading: Driving the world's fastest cars from the past six decades
UP NEXT
Quarter of UK cars produced in April were electrified

Driving the world's fastest cars from the past six decades

From 174mph in 1964 to 304mph in 2019, we track the astonishing, unrelenting rise of supercar top speeds
Open gallery
Close

Supercar: it’s a name that we’re all familiar with, arguably coined for the Lamborghini Miura 57 years ago.

The Miura’s 174mph top speed was back then the highest achieved by any production road car. Proving that envelope-pushing V-maxes have never gone out of fashion, we’ve decided to chart their steady progress, decade by decade, ending in excess of 300mph.

It would be easy to dismiss each as a seldom-attained irrelevance, but the cars that achieved them were technological flag-bearers that improved the breed overall. They also serve as a potent epitaph to the mighty internal combustion engine, which might never again be allowed to raise the bar any higher. 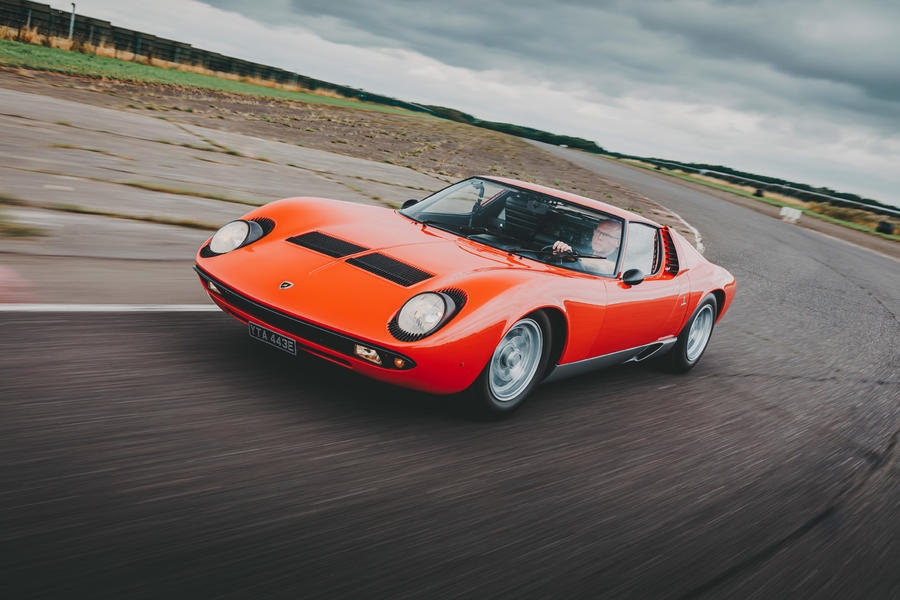 Inspired by the competition success of the Ford GT40, Lamborghini was persuaded to steal a march on Ferrari with a mid-engined production car, and by 1965 a rolling chassis was revealed with a Giotto Bizzarrini-designed 3929cc 60deg V12 mounted transversely behind the cabin. Marcello Gandini sculpted a body that would make Enzo Ferrari weep with envy while allowing the car to spear through the air quicker than anything else on the road.

Even now, the Miura is a radical shape to behold, with its ultra-low stance, sharply raked windscreen and standout features like the slatted rear screen and eyelashed pop-up headlights. 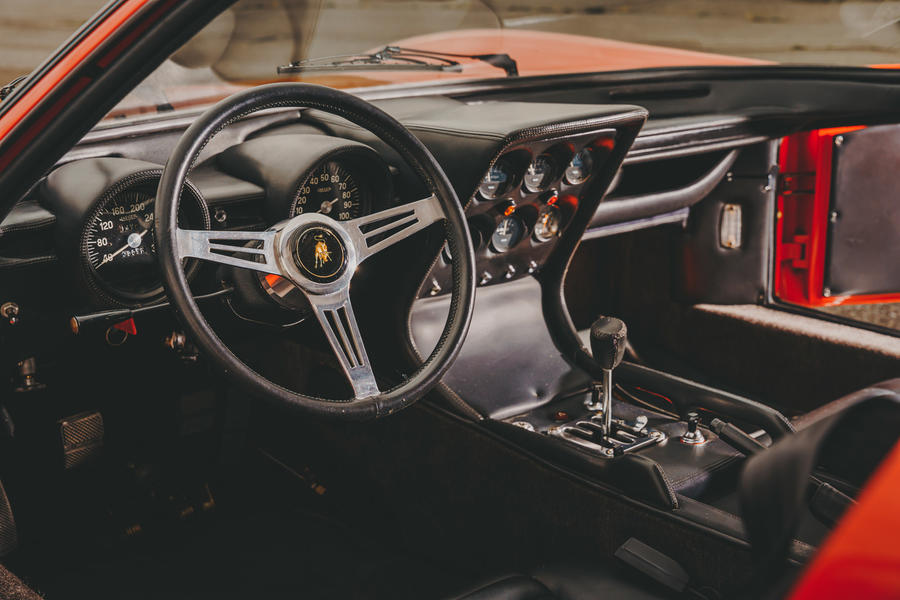 Dropping into the cabin, I’ve barely enough head room and my arms need be fully extended to reach the wheel. But it’s worth it as soon as I fire up the V12 to be surrounded by a soundtrack straight out of the film Grand Prix.

Accelerating hard along our test track’s main straight, any ergonomic failings fade away. Gear noise fights with the V12’s roar as I clip the ton, before I heel-and-toe down through the precise, mechanical shift for the right-hander at the end, the Miura feeling rock-solid and stable and surprisingly flat in the faster bends.

If we were handing out awards for intensity today, it would win outright.

Fun fact: The first Miuras had a propensity for flight at high speed, not fully resolved until suspension revisions were made to the 1971 SV model. 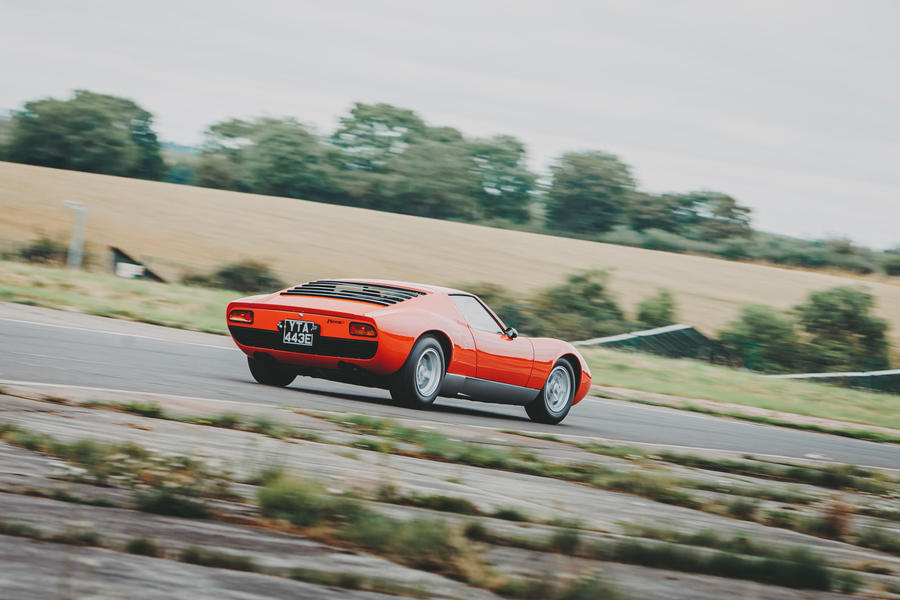 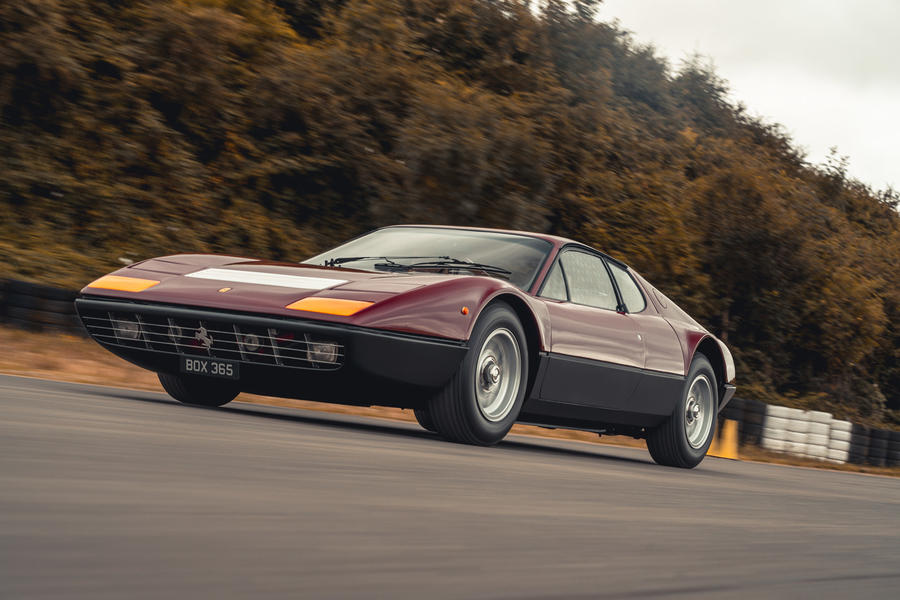 Our first Ferrari here was significant because, when it arrived in 1973, its all-new 380bhp 4.4-litre flat 12 marked the start of a mid-engined era for Maranello’s 12-cylinder, two-seat road cars that was to endure for nearly a quarter of a century.

There’s a simplicity and purity to the 365 GT4 BB’s Pininfarina-penned shape that later derivatives never quite matched. Shorn of all unnecessary addenda, with hardly a flat edge adorning a panel, it avoided the need for unsightly side scoops and even had an aileron integrated into its roofline for delivering air to its four, triple-choke carburettors.

And the rip-snort from those Webers is what you hear first on start-up. Snick the chromed gearlever into its dog-leg first, then marvel as the engine timbre hardens into a trumpeting roar towards its 7600rpm redline. 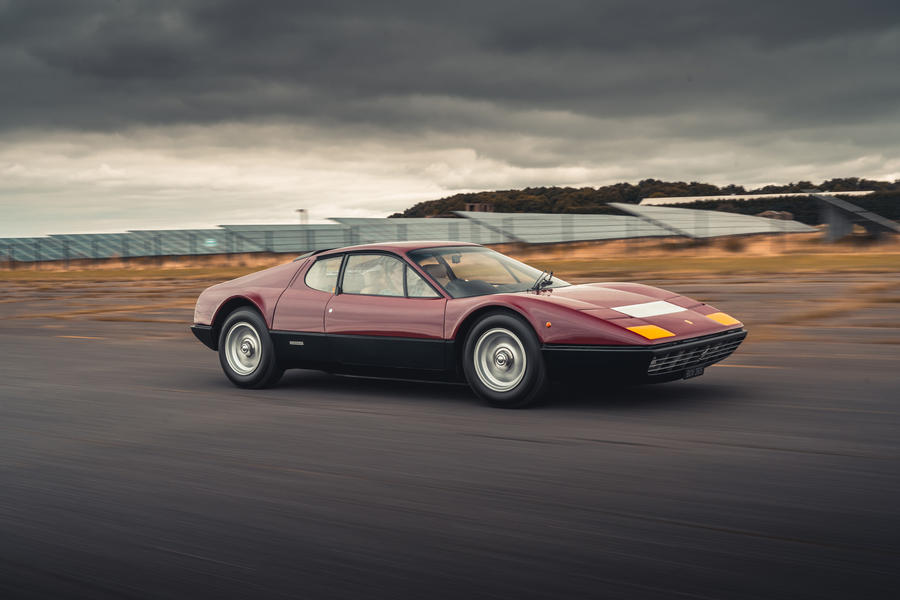 As we clip just shy of 100mph on the straights, I’m barely flexing my right foot. The steering is deliciously light, telegraphing every nuance of the surface through the wheel’s rim.

I have to conclude that, if one had had to traverse whole countries in the 1970s, this would have been the weapon of choice, with its easy-going savoir faire and abundant reserves of power to banish any contender from its rear-view mirror.

Fun fact: The BB wasn’t Ferrari’s first attempt at a model with a mid-mounted 12; in 1964, the configuration’s benefits were proven in the 512 race car. 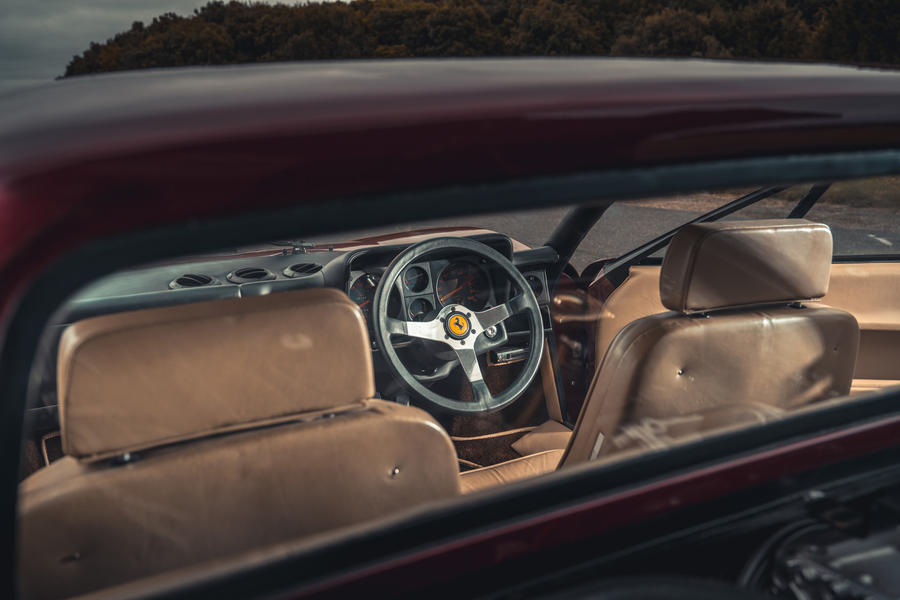 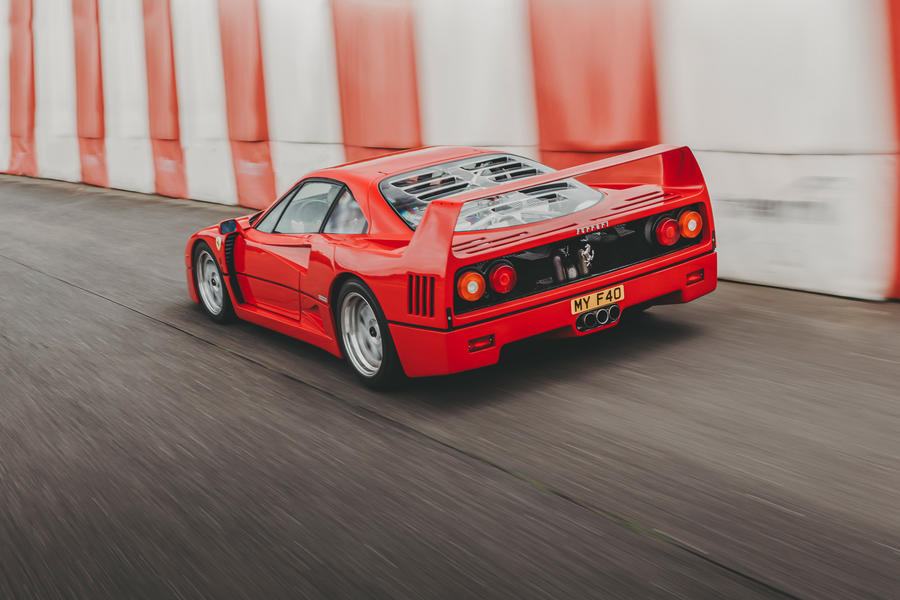 And now we reach the double ton… Ferrari’s sales had started to falter in the 1980s, with accusations that its cars were turning soft. A plan was hatched to enter Group B rallying, resulting in the hardcore 288 GTO road car, which in 1987 begat a model even less compromising: the F40.

Powered by a twin-turbocharged 2936cc V8 producing 478bhp, the F40 had prodigious performance and was optimised by a kerb weight of just 1235kg, thanks to a tubular spaceframe chassis clothed with a combination of Kevlar and carbonfibre panels. Wind-tunnel testing also resulted in a relatively low drag coefficient of 0.34, helping the F40 achieve its 201mph V-max. 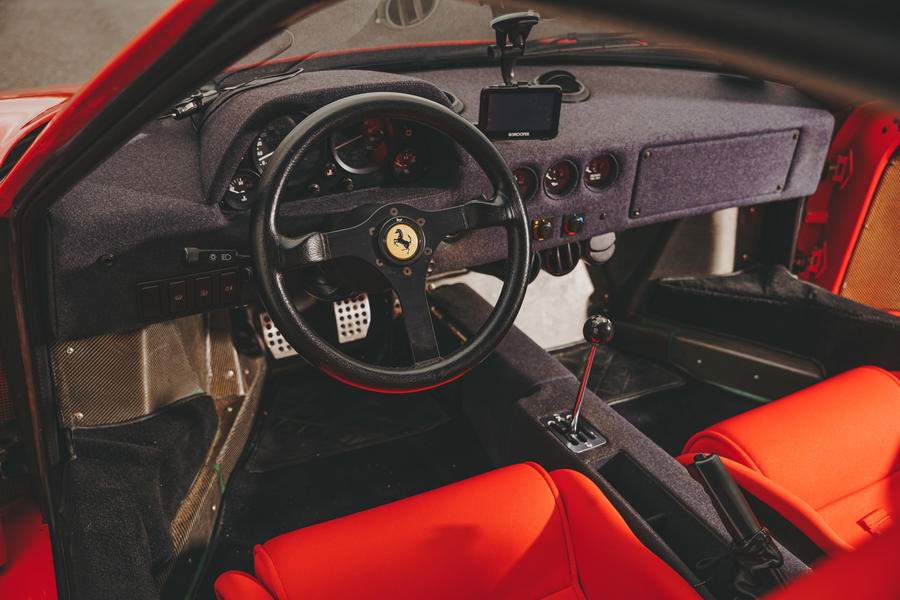 I close the driver’s door with its pull chord and find myself ensconced in a wonderfully pared-back cabin. Pull away and I note a rather abrupt clutch, but also weighty steering, which is a delight once speeds rise, taut and alive with feel.

I unleash the near-500bhp arsenal, and while there’s some old-school lag, it’s more than compensated for by the truly absurd levels of midrange thrust as the twin IHI turbos spool towards their maximum 1.1 bar boost, accompanied by the loudest wastegate whoosh imaginable.

The F40 was the perfect tonic for those accusations of Ferrari softness.

Fun fact: To save weight, the paint on early F40s was so thin that you could see the weave of the carbonfibre bodywork below. 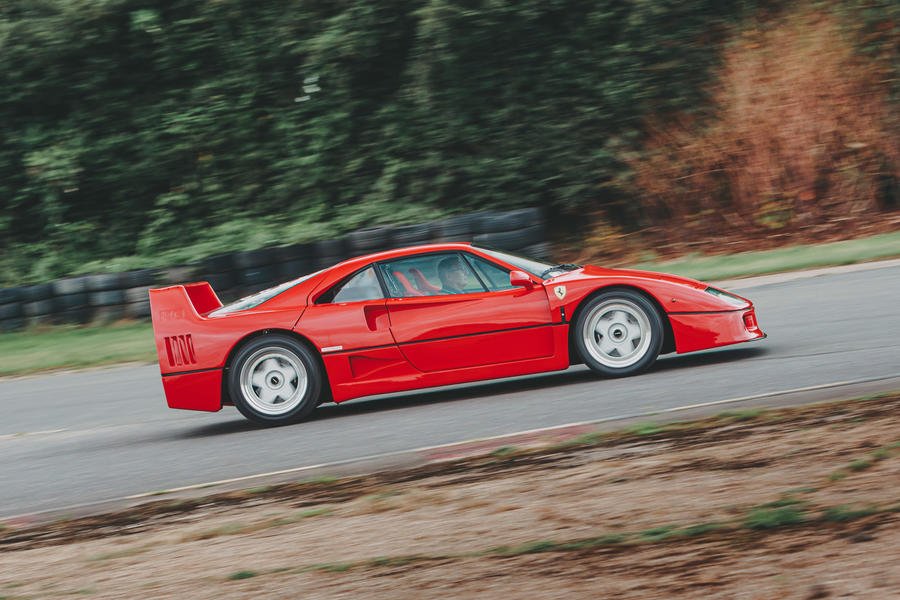 18.5.88: “On a smooth road, it is a scintillatingly fast car that is docile and charming in its nature. You can use its performance and revel in it. There’s little doubt it is the very personification of the term sports car.” 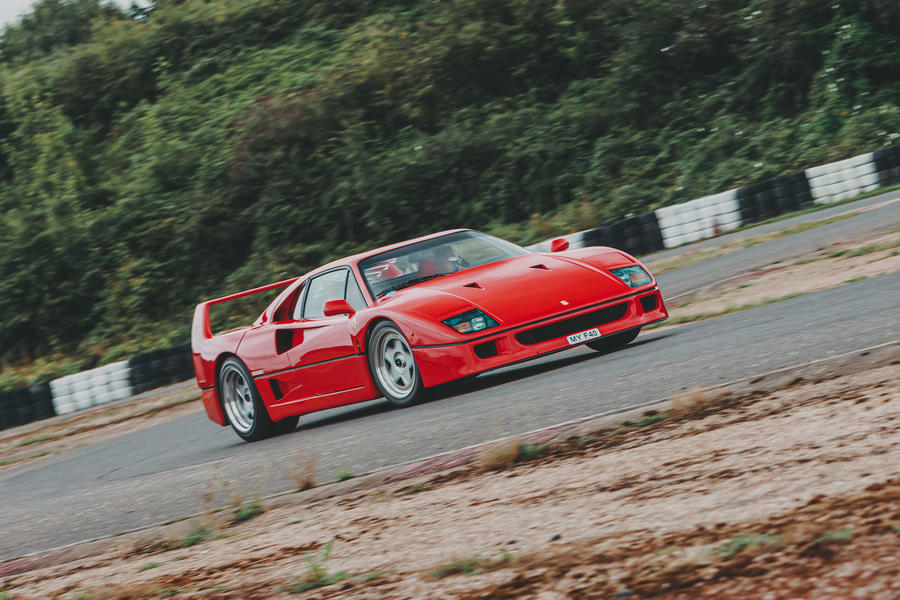 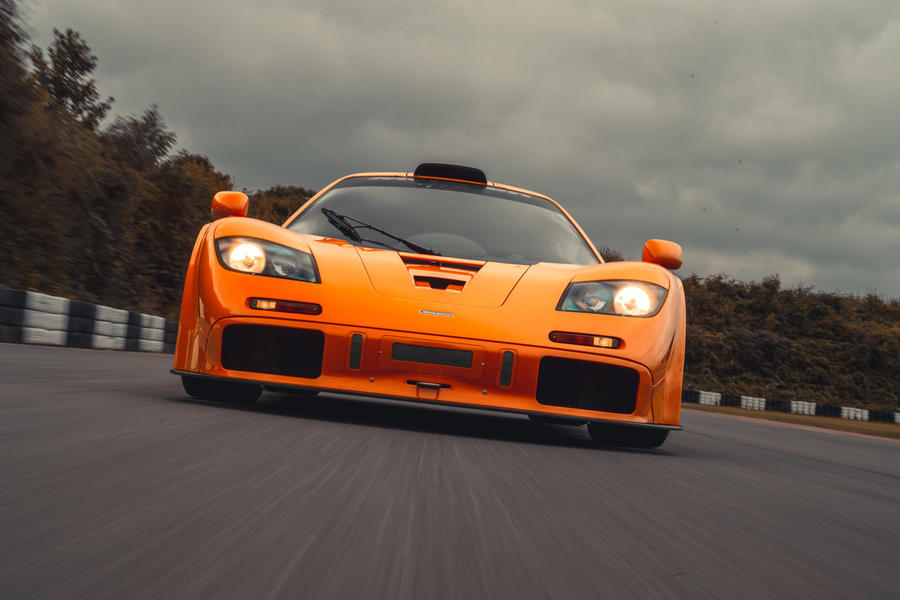 The McLaren F1 was never conceived to be the world’s fastest sports car but simply the best. 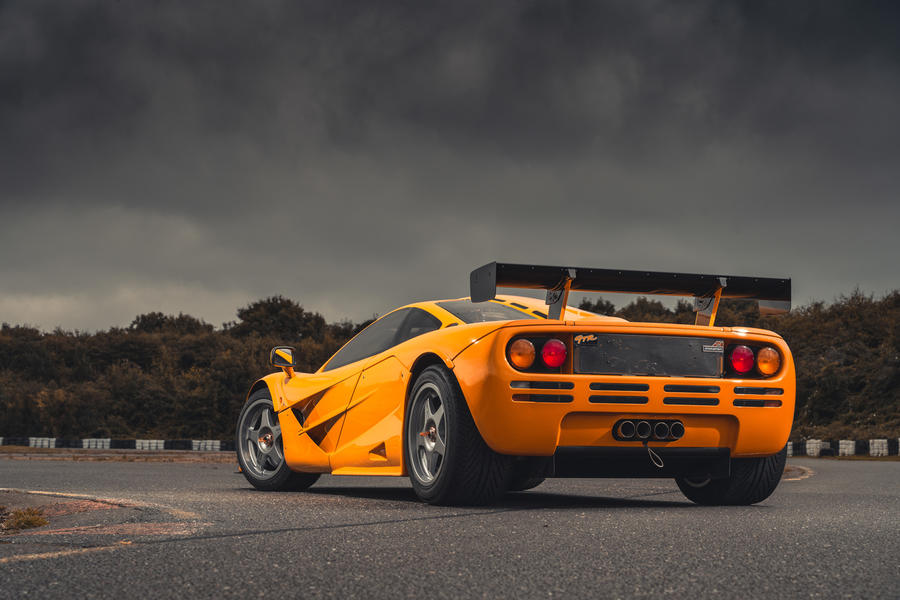 I didn’t drive the McLaren F1 GTR you see here, but colleague Matt Prior drove the original road test F1, called XP5, not so long ago.

“The V12 starts without the histrionics of so many of today’s supercars,” he says. “Its response is pure and linear and matched by the other controls. The gearshift is positive, the steering picks up weight as cornering forces build, and it’s engaging and involving like precious little else.

“In its immediacy and compactness, the F1 feels not unlike a Lotus Elise – only with a frankly preposterous amount of shove behind it.”

At the time, we speculated that a road car would never go so fast again. It turned out that we were wrong…

Fun fact: Isuzu originally wanted to provide the engine for the F1, offering up a 3.5-litre  V12 that they’d developed for the Lotus Formula 1 team. However, McLaren refused, and the engine ended up powering the ridiculous scissor-doored Como F1 Super Truck pickup concept. 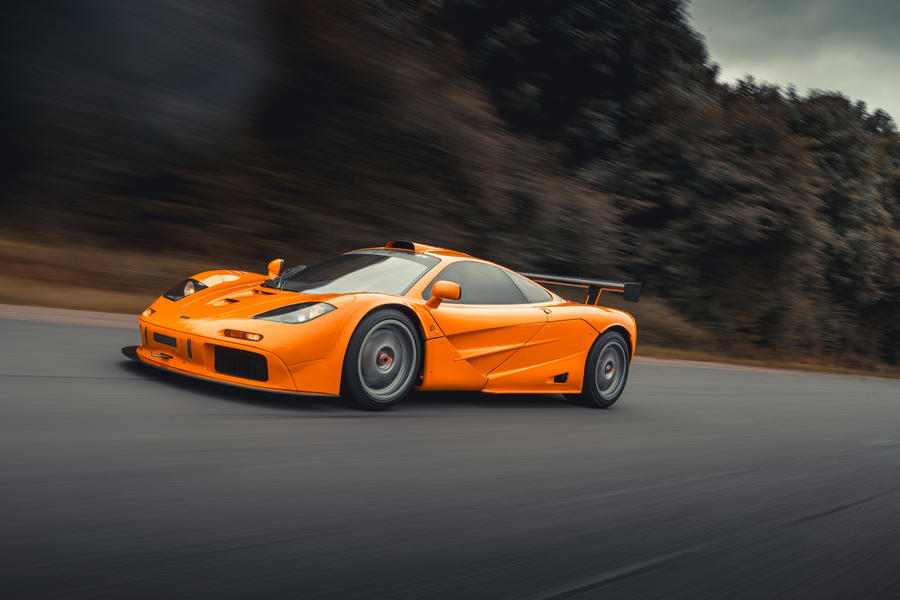 11.5.94: “We are convinced the F1 will be remembered as one of the great events in the history of the car. What you are looking at here is very possibly the fastest production road car the world will ever see.” 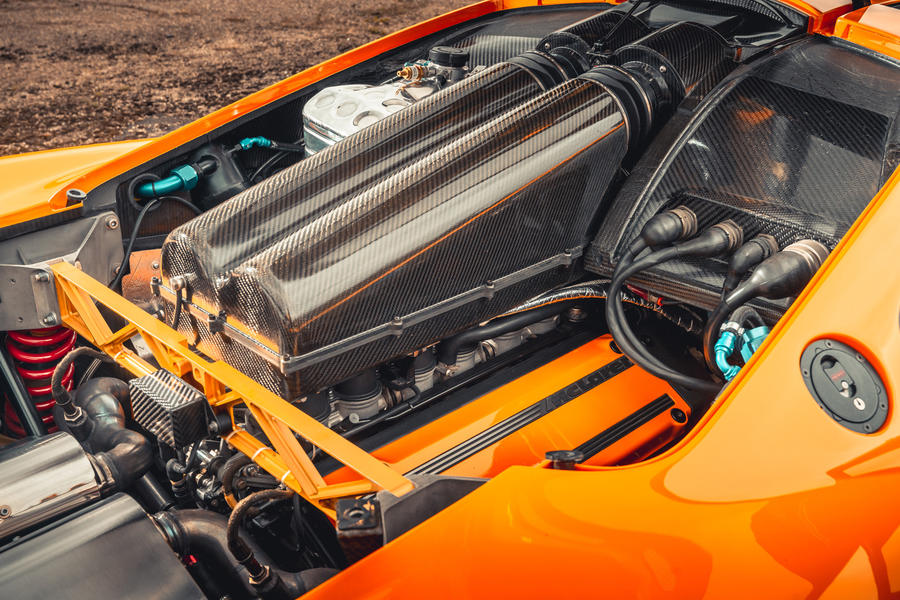 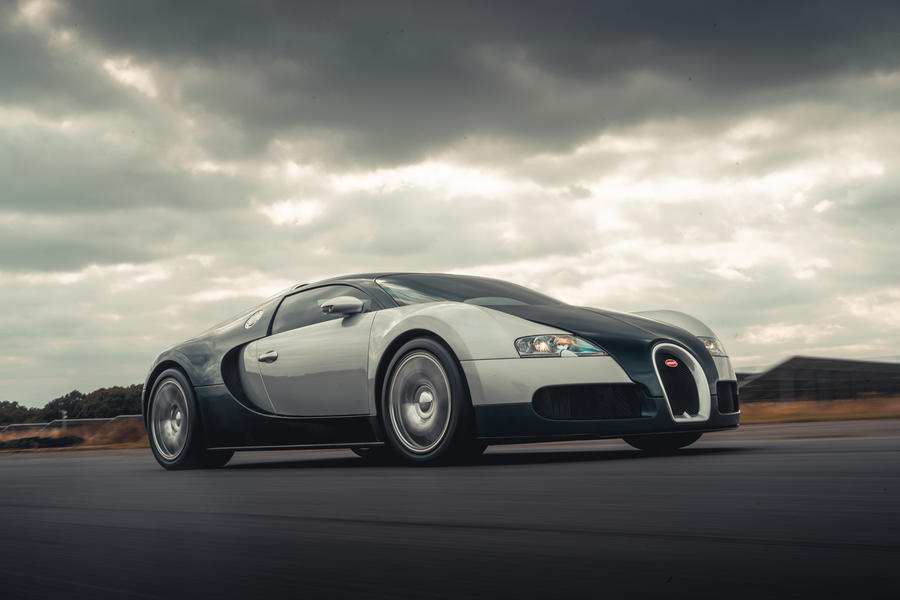 It was as if Volkswagen Group boss Ferdinand Piëch had plucked the Veyron’s target numbers out of thin air: 1000PS (986bhp), a 250mph-plus top speed and price of €1 million.

At launch, its W16 engine not only made the requisite 1000PS but also an eye-watering 922lb ft of torque, resulting in a top speed of 253mph.

Ten radiators had to be used to cool the 8.0-litre engine, which was left without a cover to release more hot air. In order to deploy all that power, a four-wheel drive system was created with a complex Haldex differential working on the front axle and a limited-slip differential at the rear. 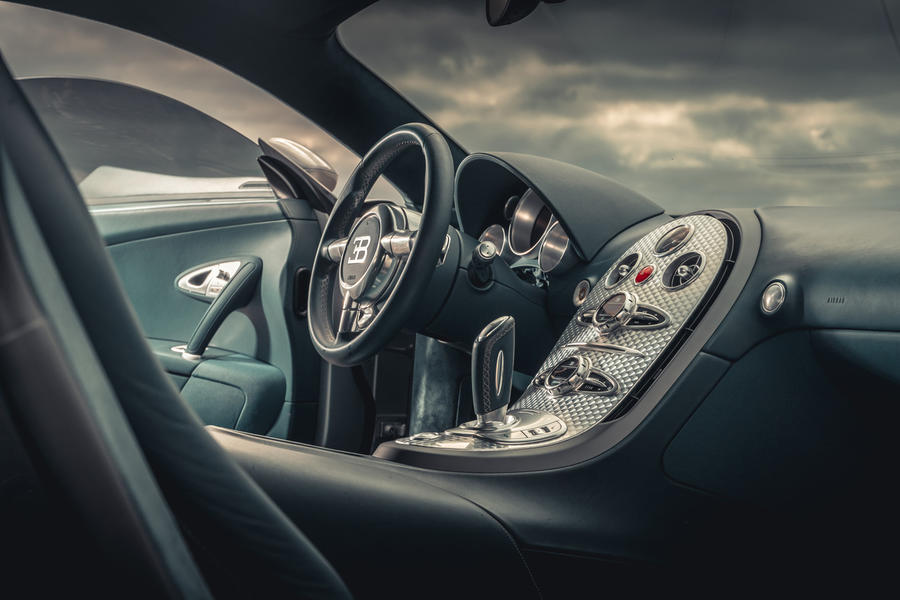 Strangely, the Veyron’s cabin is the least intimidating of all our cars so far. Push the start button, select drive, accelerate away at a normal rate and I could be driving a slightly larger Volkswagen Golf. Wake all four turbos, though, and it sounds like a Boeing 747 on full thrust.

After some initial lag, the Veyron’s 1888kg is no match for the monstrous torque, and as I head towards turn one, the speed it reaches is near-suicidal. Thankfully, the brakes are equally stupefying, and I get to live another day. Well, at least until I try the Bugatti Chiron… 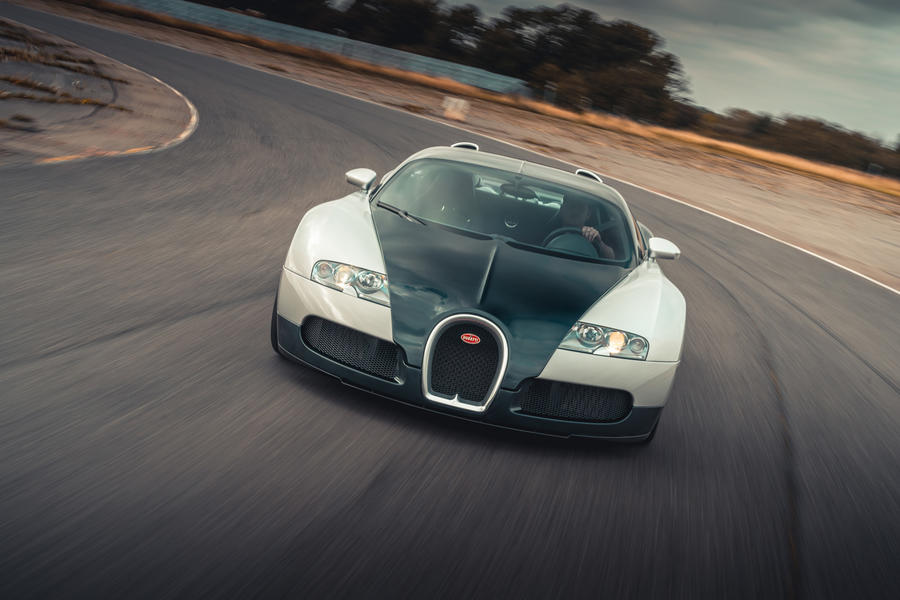 18.10.05: “In trying to be the best at everything, the Veyron fails in the one key area that has defined the great supercars over the years; despite the titanic performance and refinement, it doesn’t grab you emotionally like it should.”

Fun fact: If you thought the Veyron was mad, you should have seen the concept that spawned it. The 1999 Bugatti 18/3 Chiron featured 18 cylinders in three banks of six clothed in a Guigario-designed body, but produced just 547bhp. 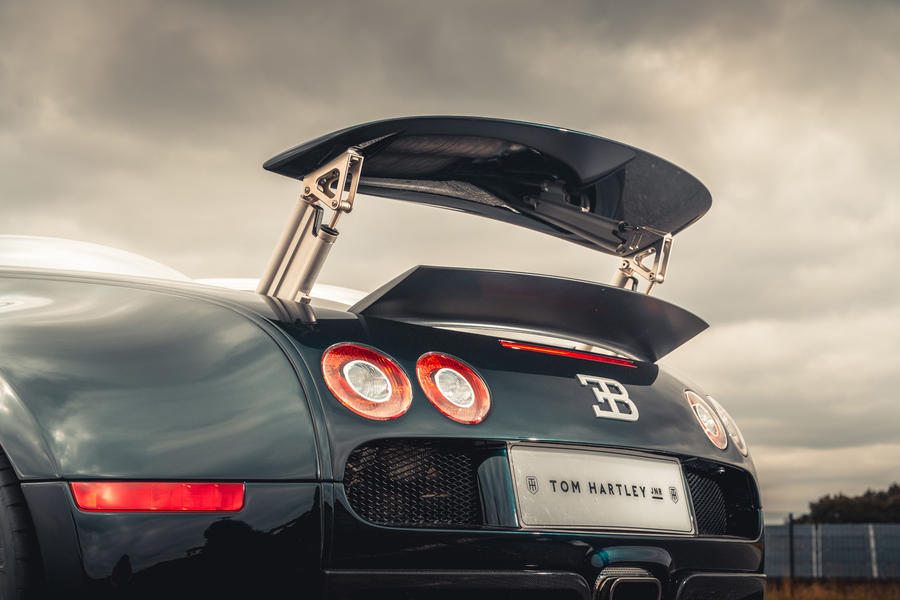 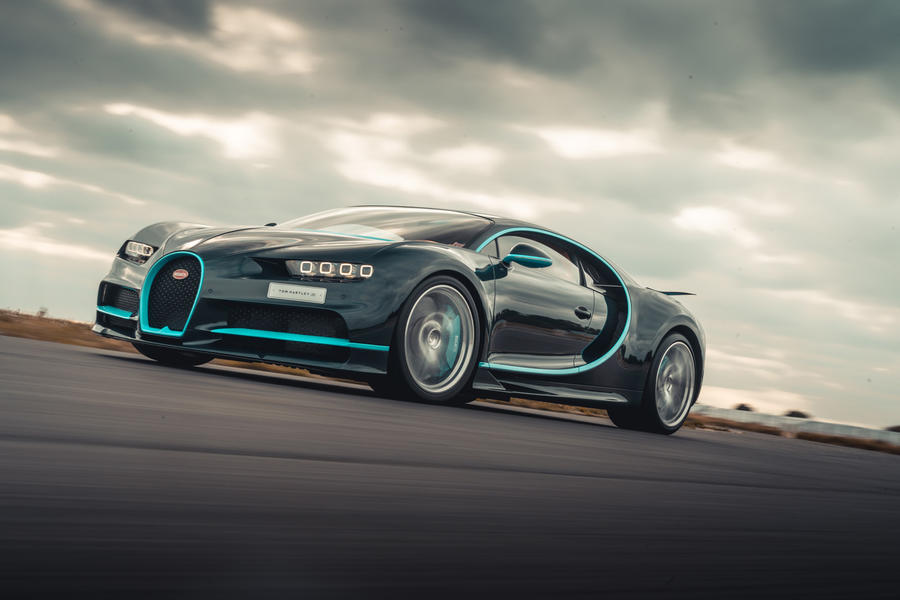 In August 2019, the Bugatti Chiron Super Sport 300+ hit 304.77mph. The £3.1 million car has still yet to attain European type approval, but forgive us this small transgression for the sake of a headline figure.

Replacing the Veyron, the Chiron had beefed-up engine internals and its four turbochargers increased in size, resulting in a 1479bhp output. The 300+ went still further, with a boost to 1578bhp, and a 9.8in-longer rear with a narrower wing helping it to just exceed the triple ton.

You know I’m going to tell you that this ‘stock’ Chiron feels fast. I make three full-bore rolling starts from 30mph, the rear wheels scrabbling slightly, and clip 150mph each time before having to brake hard for corners. Objectively, engaging all four turbos is so much easier than in the Veyron, with a lift in low-end performance that is stratospheric. 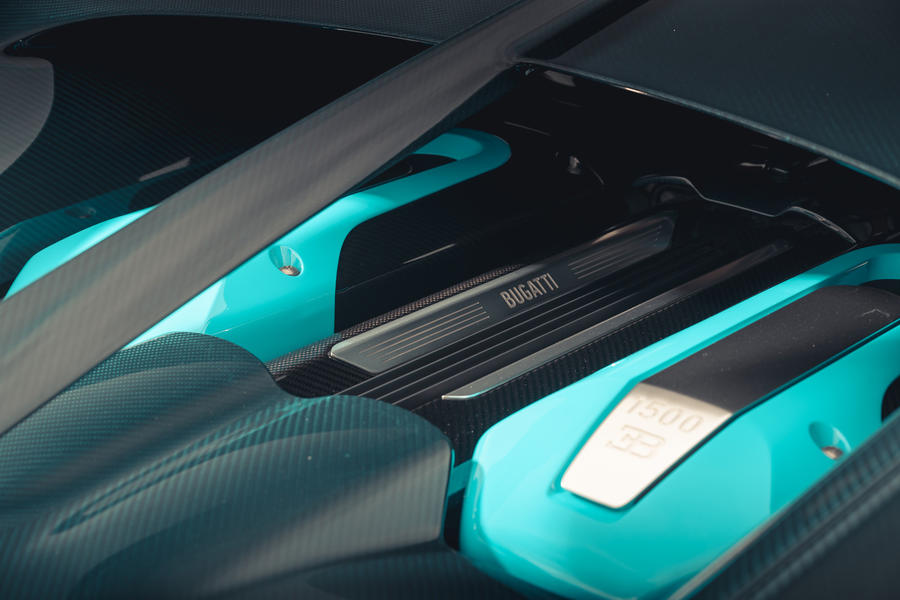 It’s the sheer lack of drama with which the Chiron goes about its incredible business that impresses me the most, though. Unrelenting, mesmerising, frightening amounts of power are deployed with an almost serene indifference.

So, is this story’s final top-speed legend the pinnacle of ICE brilliance or the final bastion of automotive profligacy? I fear that’s a question to which the answer is ‘both’.

Fun fact: Ex-Formula 1 racer Juan Pablo Montoya once took a standard Chiron from 0-249mph in 32.6sec and back to a standstill in 9.4sec over a two-mile distance. 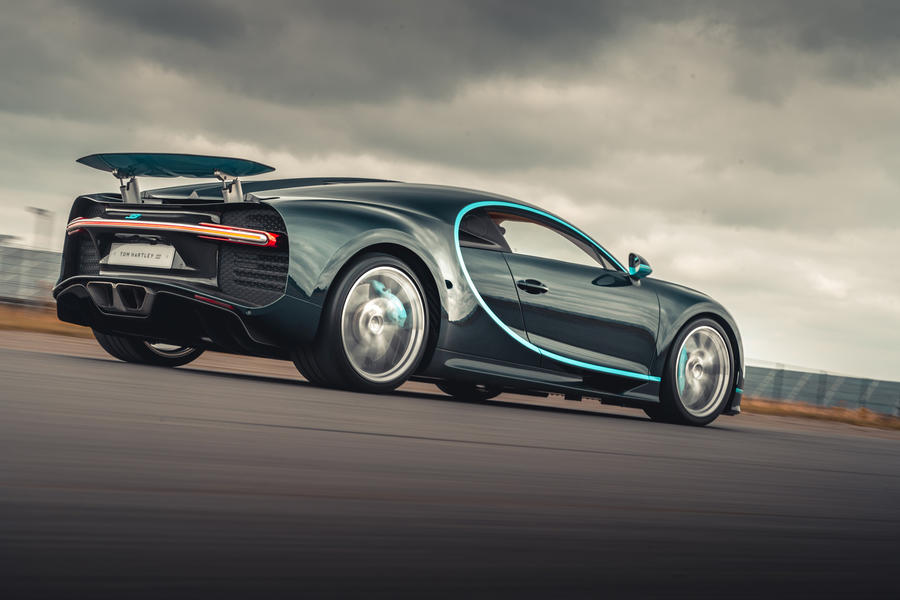 Nearly 50 years later the Maura is still one of the best looking, and most desirable cars ever made.  Who cares if it takes over 6 seconds to hit 60 mph?  I drive on public roads - it's plenty fast enough for me.  Come the lottery win I'd have one in a heartbeat.

Nearly 50 years later the Maura is still one of the best looking, and most desirable cars ever made.

249mph to standstill in 9.4 seconds? Better strap your eyes in!

Great though the achievements of the Car industry to produce Cars like these, engineers must've dreamt of one Day Cars going s fast as todays Hypercars, and now, for us they're a reality 300+ mph with ICE power , Ev's with instant torque reducing acceleration intervals to what must feel like warp speed!, yes, great, amazing to watch these Cars being taken to their top speed, as an aside, what technology has filtered down to our daily Chariot?, you can't do 300mph on the Public Highway, their too big for the weekly Tesco run, no boot big enough I imagine, so, daily life for them isn't possible, and top speed, how much faster do we, can we go?