From £2,518,00010
Bugatti makes a road-going version of the W16-engined hypercar that became the first to hit 300mph
Open gallery
Close

It's only six minutes and four miles between Bugatti’s factory in Molsheim, eastern France, and a sports centre car park in the nearby village of Bischoffsheim.

But between the two places, Bugatti test driver Andy Wallace has already demonstrated how the firm’s latest hypercar, the Bugatti Chiron Super Sport, can generate more than 900bhp at no more than 4000rpm and navigate the biggest, harshest speed bump in Christendom without cracking its underbody.

As we pull up near – but not too near – a driving-school hatchback whose bemused instructor and student are practicing parking, it's a deft example of this car’s abilities.

We’re testing this Chiron on the road “because it is a road car”, says Wallace. It also just so happens to be one with 1587bhp (1600 metric horses) and a speed limiter that doesn’t kick in until 273mph (440kph).

The Super Sport is a slightly more habitable version of the limited-run Bugatti Chiron Super Sport 300+, which replicated a prototype car Wallace took to 300mph. It's mechanically identical but has an interior more like a regular Chiron, so more leather and comfort.

There are still ludicrous numbers, though. It will do 0-62mph in 2.4sec and 0-124mph in 5.8sec. Given the advent of silly-fast electric cars, that isn’t so spectacular in isolation. But it will also go from 0-186mph in 12.1sec and 0-249mph in 28.6sec. It could maintain its near-300mph top speed until its fuel tank emptied in about eight minutes at full whack if there were a road or track long enough to try it.

(Incidentally, this continuous top-speed running isn’t so easy in electric hypercars at the moment, because of the heat generated by power transfer. Given that Bugatti’s majority shareholder is now EV specialist Rimac, you can imagine that these engineering challenges are on its to-do list.) 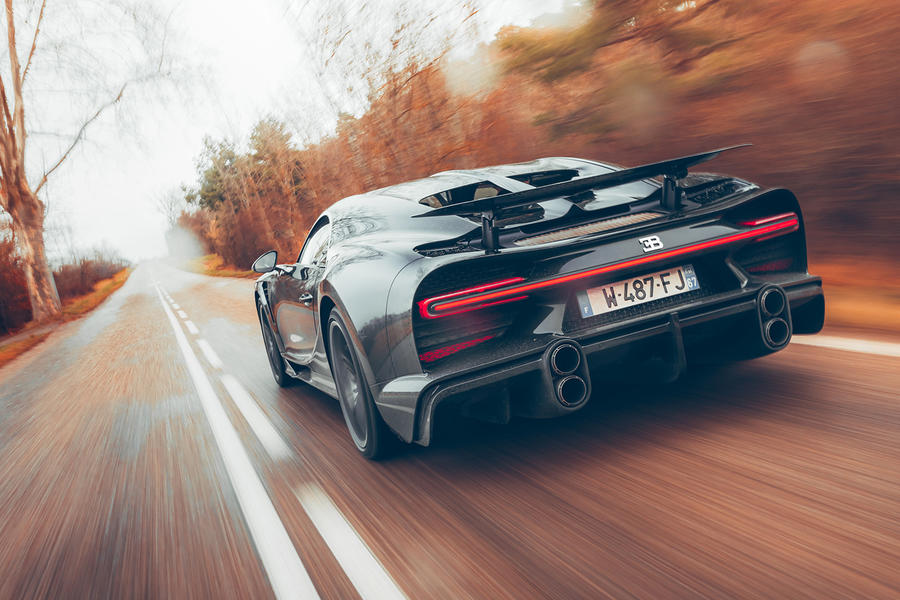 Driving at these speeds is so demanding that the Chiron’s 100-litre fuel supply would run out not too soon before you would exceed the durability limit of its Michelin Pilot Sport Cup 2 tyres, which need replacing after sustained periods at very high speeds. Meanwhile, at such engine speeds and power outputs, the Super Sport’s induction system swallows a cubic metre of air – 1000 litres – every single second.

All of these numbers, feats and statistics are impressive if you believe in the engineering and purpose behind creating £2.75 million hypercars (which I sort of do, even though I think driving a Morgan 3 Wheeler would be more fun more often).

But Bugatti’s real feat isn’t the numbers themselves. If you want to make a car only do 300mph, it will be very difficult, because the forces at play are sky-high; but in the overall scheme of automotive engineering, that’s by no means the hardest part of it.

The truly remarkable thing is that in the Super Sport, as with other Chirons and Veyrons before it, this performance is all achieved with an integrity that makes these cars as straightforward to use as a Volkswagen Golf. Actually, given how touchscreen-heavy the latest Golf’s interior is, driving the physically dialled Chiron is in many respects easier.

As Wallace and I climb out of the car to swap seats, he runs me through the exterior changes that mark out the Super Sport from the regular Bugatti Chiron. Most obviously and significantly, the rear body has been extended by 250mm.

The exhausts have been turned vertically and separated, rather than sitting horizontally in the centre of the car, too, which allows the diffuser to be widened and to stretch further towards the upper body section. This extension and closing up of the tail, looking closer to the aerodynamic ideal ‘teardrop’ shape, maintains laminar airflow for longer, so it’s more efficient: it makes a bit more stabilising downforce with no drag penalty.

This stuff matters at speed, because of how things change at speed. Wallace says that at 261mph, at each wheel’s rim, forces are 3000g; so a 2.5g valve cap weighs 7.5kg and a 44g tyre-pressure sensor becomes 132kg. A conventional car tyre valve can’t be used, because at that speed it bends so much that it leaks. Things like this are happening throughout the car. So the more aero you have on your side, the better.

None of this is evident as you slide down into one of the snug-fitting driver’s seat and electrically adjust it. The fairly small, thin-rimmed and not-quite-round steering wheel manually adjusts generously for reach and rake. There’s a gear lever for the Ricardo transmission, beautifully machined, as so much of it is, from aluminium. The strip that runs down the centre console is machined from one piece. The vents atop the doors, finished in black so that they look like plastic, are actually titanium. There are a few cubbies, door pockets and a glovebox. With its small, shallow boot at the front, it could even be a grand tourer.

It’s pretty loud, though. With Wallace in the scarier seat, I thumb the wheel-mounted start button. The engine isn’t over-dramatised in its start sequence; it’s just naturally dramatic because it’s a quad-turbocharged W16 of 8.0 litres making 198bhp per litre at 7000rpm. Two of the turbos are shut off until 4000rpm to improve low-end response. The peculiar engine layout isn’t silken like, say, a V12. It’s an imposing volume like a ship or tank’s engine. There’s an inordinate volume because of the sheer amount of physics going on.

But, still, it’s a Volkswagen Group car. So the seven-speed dual-clutch automatic gearbox creeps away from rest easily. The steering is medium weighted, nicely geared at 2.2 turns between locks, electrically assisted and with a good blend of response and stability around the straight-ahead position.

The ride is reasonably firm and there’s a fair bit of road noise. This isn’t unusual in carbonfibre-tubbed cars with tremendous rigidity. But the plush interior materials mute it more than in, say, a McLaren. 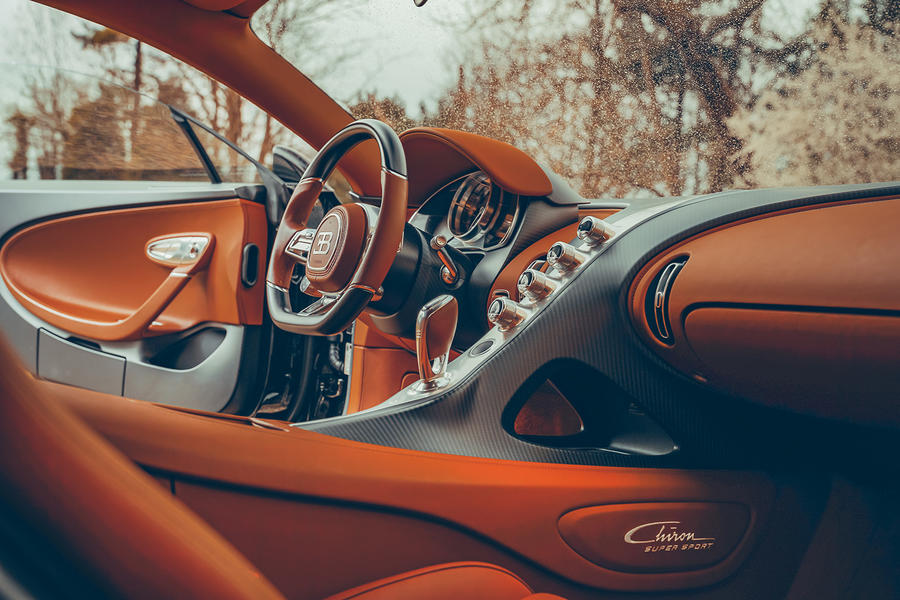 Different driving modes leave the steering well alone, as well as the engine and gearbox response. The biggest change is to the aero, courtesy of the rear wing height and angle, plus deflectors ahead of the front wheels.

Also adjusted is the ride height and suspension stiffness, although apart from when you activate the nose lift, you will likely be unaware of those, because the effect is subtle. At any speed and mode, the Chiron rides firmly, with tremendous body control and precious little roll. Yet the steering builds weight as cornering forces increase, so there’s something reassuring to lean on in bends. The balance is good and feedback strong – not always a given in a four-wheel-drive car. The Super Sport is wide and, at nearly two tonnes, heavy, but it’s pleasing to drive as a sports car.

And traction is phenomenal. With the tyre temperature above 25deg (or 35deg if it’s damp; there’s a display on the dash), the Super Sport will accept full throttle in a straight line with full traction. When I try it in the damp in second gear while not entirely straight (Wallace’s idea), it gives a tiny shimmy, the traction control flickers for a moment and then traction returns.

The car is sensationally fast. Uncomfortably fast. Absurdly fast like the Porsche Taycan Turbo S from standstill, only we're not starting from a standstill. The noise is ever angrier, the gearbox shifts up on its own at just past 7000rpm and it all begins again. And it would keep going and going and going, were we not on a road, so the experience takes considerably less time than it took you to read this paragraph.

Braking is exceptional, too. If you heave on the anchors, the rear wing becomes an airbrake, sufficiently angled that it would give 0.6g of retardation alone from really high speed. Even at this more modest pace, though, it acts like a calming hand at the back of the car, maintaining exceptional stability while weight shifts forwards and the carbon-ceramic discs convert forward motion into heat. Heat, noise, power, airflow: they’re what define the Super Sport if you’re hard on any of its pedals. And they’re all utterly remarkable. 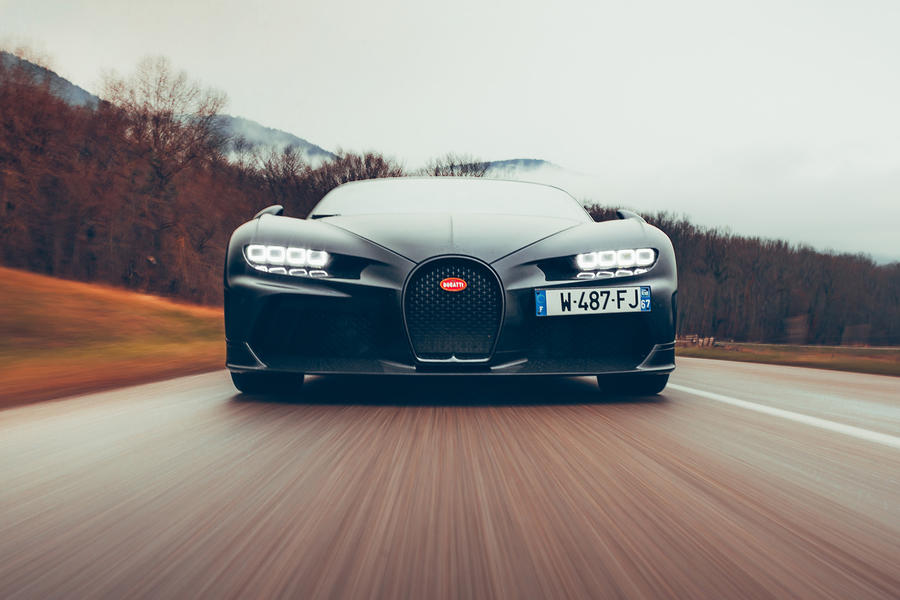 For me, though, what remains more special still is that if you’re light on the controls, the Super Sport slips in and around other traffic like it doesn’t have a care in the world.

Its greatest achievement isn't that, with no limiter, it would hit 300mph. It’s that it will pull off that truly remarkable feat while being no more difficult to drive the rest of the time than that driving-school hatchback. 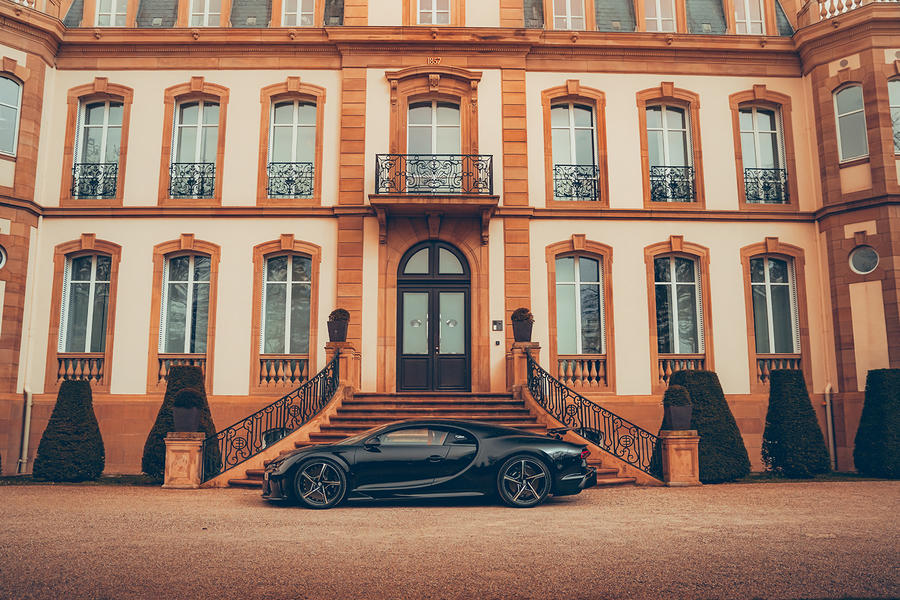 Bugatti built the Veyron, not just a fast Car, and they've lost money on every car, the interior with exception of the Chiron 300+ is exquisitely no expense spared, but, no mention of Koenigsigg, they've done a Car not many can top,and, yes, Rimac, are they going to be the next generation?

A really brilliant piece of writing, Matt. The Bugatti of automotive journalism.

I think this is where us mere mortals respond with something like 'I will never be able to afford one, but I'm just glad it exists.' However, the entire Bugatti project continues to leave me entirely unmoved.

Like a six star hotel in Dubai, I'll accept that the product is exceptional, but I'm not really bothered. A T.50 though, or perhaps a Huraya... now you are talking. A Bugatti seems so passionless by comparison.