Cupra has further detailed the full range for its Formentor crossover, with the first UK deliveries commencing this month and prices starting from £27,395.

Orders began in October for the top-rung 306bhp, four-wheel-drive version, which begins at £39,830 for the VZ2 trim level and rise to £43,840 for the VZ Edition model. That's the first variant to be deliveried to UK buyers.

This month orders for the base 148bhp 1.5 TSI petrol model are available to order, with pricing from £27,395 for the base V1 variant. That comes equipped with 18in alloys, ambient lighting, LED head and tail-lights with dynamic indicators and electric heated door mirrors with puddle lights. A 12in touchscreen navigation system with wireless Apple CarPlay and wired Android Auto, a 10.25in digital cockpit display and a wireless phone charger also feature, as do rear parking sensors, three-zone climate control, keyless entry and start and adaptive cruise control.

V2 trim is also available offering further kit upgrades, but the VZ2, VZ3 and VZ edition models are currently reserved for the 306bhp model. First deliveries of the 1.5 TSI begin in the first quarter of 2021.

A 1.4-litre plug-in hybrid with either 201bhp or 242bhp will go on sale in the first quarter of next year. A 187bhp 2.0 TSI petrol will also become available. The firm eventually plans to offer seven different engine options for the Formentor, although availability will vary by market. 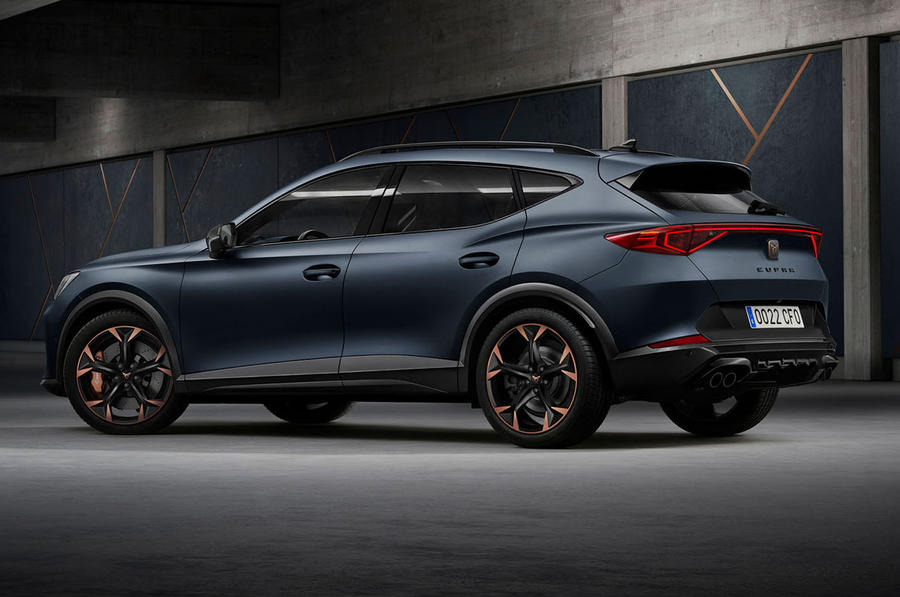 The new coupé-SUV is the first stand-alone model from Seat's premium spin-off brand, and joins reworked versions of the Ateca and Leon in Cupra’s line-up.

The Formentor will be built on line two of Seat's Martorell factory, with 160 cars per day initially being produced - although the firm says it will account for around 10% of the plant's output once production reaches full capacity.

Speaking at the start of Formentor production, Cupra boss Wayne Griffiths - who was recently named head of the overall Seat brand – said that the model marked "the biggest step in our brand's history.

"It's the first car 100% developed as a Cupra, and has all the DNA of the brand. This will help Cupra not only in terms of sales, but also to attract new customers."

Griffiths added that the Formentor will play a key role in the target to double Cupra's sales from around 50,000 next year, with the crossover anticipated to account for more than half of the brand's volume in 2021.

As Cupra’s first stand-alone model, the Formentor was shown as a concept at the Geneva motor show last year and the design is largely unchanged in production form. Griffiths said that "at the moment we don't foresee" a Seat-badged version of the Formentor being offered.

Griffiths said the Formentor “is destined to make Cupra an even more relevant brand in the market”.

The 306bhp range-topper comprises a 2.0-litre turbocharged petrol unit, which produces 295lb ft and sends power to all four wheels.

Inside, the Formentor’s dashboard is built around a 12.0in infotainment touchscreen and a digital instrument display. The dash also features a horizontal LED light strip, which runs into the front doors. Those lights are used for safety functions, such as blind-spot detection.

Just sat here in my house looking at my Lexus NX and looking at this Seat whoops sorry Cupra and me thinks Lexus should have a word in VW/ Seat/ Cupra eyes, its copy see you in court VW

I just wish that, when car makers come up with a new sub brand that they'd stop just shoving the standard interior in them, the dash in this looks similar to the dash in a Leon, or a Golf, if your buying a sporty car like this, then the dash should look sporty too.

We've truly jumped the shark here. The claim that this has 'all the DNA of the brand' is just meaningless... this brand has been cooked up in a marketing office and has no appreciable heritage or real meaning. Deliver some great products and maybe - just maybe - you can talk about 'DNA'.