BACK TO ALL NEWS
Currently reading: Classic cars of the future
UP NEXT
Nissan will build batteries in UK to sustain Sunderland plant

Classic cars of the future

The past year yielded some astonishing new metal, and a number of truly outstanding models which, for various reasons, will only ever be sold in small numbers.

This perfect storm means that these models are destined for future classic status. Here's where some of the Autocar team would put their cash...

It wasn’t the best sporting saloon or even the best Jaguar that we drove in 2013, but there’s something about the bespoilered, bewinged XFR-S that guarantees it classic car status in years to come. For starters, it’s a rare beast, even today, with little more than 100 examples being made in right-hand drive.

But it also has that left-field appeal to its design and engineering that, 20 years down the line, will heighten its appeal and make the likes of us remember it with rose-tinted spectacles.

Not that you need to make any excuses for how good it is in the here and now. With a supercharged 5.0-litre V8 that thumps out 542bhp via the same excellent eight-speed paddle-shift auto trailblazed by the new F-type, the XFR-S is outrageously fast in its own right. And even if its chassis does seem a touch uncouth compared with what we’ve come to expect from a Jaguar over the years, in future that won’t matter one iota.

Indeed, the fastest XF will probably be remembered as the Jaguar that was deliciously stiff, the one that felt like a true hot rod.

And, of course, you will always have to have one in bright blue, just like the cars they gave the press for those very first series of evaluations. At the time, they looked garish. But in 20 years, French Racing Blue will be the only colour to have. And the optional rear wing will be equally de rigueur, too.

This year Alpina introduced the new B3, its heavy hitter and a car that we liked very much indeed – but it’s not the one primed for future esteem, in my humble opinion. That honour falls instead to the XD3 Biturbo, Alpina’s first SUV.

The fact that it is first obviously helps. If there were no more to come, that alone would guarantee it a cult following. But it won’t be. This ought to prove just the initial salvo in Alpina’s long-overdue assault on the soft-roader market.

There will be many Xs, and this is where it starts. It will be rare as well (especially in right-hand drive format) and coveted, having already sold out in the UK.

In time-honoured Alpina tradition, it is also very, very fast. Any 0-62mph time beginning with a four is noteworthy; in an SUV it’s positively electrifying, and feels it. For some, the notion that it was once the fastest-accelerating oil-burning 4x4 (however briefly) will be sufficient to later fete it.

But for everyone else, the fact that it will also manage 41.5mpg, emit not more than 180g/km of CO2 and ride with fine, upstanding manners should mark it as one of the soft-roaders to own from the quintessential decade of the breed.

Okay, so in 25 years’ time Classic & Sports Car magazine is not going to devote an entire cover to a modified Land Rover Defender. But the Defender will be a classic – many already are – and a modified one could play its part in a big Defender story.

One tweaked by Twisted is as good an example as any – especially if, like this model, it has a Chevrolet V8 in the front of it. 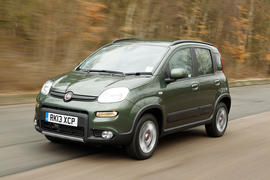 It has a unique mix of city car and small SUV traits, but how much rugged capability does Fiat's off-road supermini really have - and is it the best of its kind?

Twisted is only likely to make 12 such Defenders a year, mostly for export, so it’ll be rare. And the 520bhp performance, chassis modifications and interior upgrades show the extreme of what it’s possible to achieve with what is, otherwise, the workhorse of our times.

As time goes on, once production finishes in 2015, I can envisage quite a few modified Defenders, visually at least, being returned to production spec. But, in the way that well modified old Nissan Skylines and Ford Cosworths do now, many altered Defenders will carry on as they are – as living, driving examples of how we liked things at the time.

That old Land Rovers are durable, repairable and usable only adds to their appeal. This will be a great occasional classic that you can pull out for the winter, with a mechanical spec that has a story to tell. Just don’t expect it to be worth anything like the £140,000 that it commands now.

For me, this is all about defining the ‘classic’ concept. And since I’ve never heard anyone do that very successfully, I’m going to have a crack at it myself. A ‘classic’ must be critically acclaimed – good enough to be worth investing in, spending on and keeping. It must not be a money pit.

Doesn’t have to be cheap, though. Can be worth more than the average old shed of its type, but absolutely must hold its value. Ideally, it would appreciate a bit. Scarcity is important, but so are charm and accessibility.

So my suggestion is one of the most charming and accessible new cars that I’ve driven all year: the Fiat Panda 4x4. A banker, you might say, given how rare and sought after the original mini mud-plugger was a few years ago. Specifically, I’m recommending the 1.3 MultiJet diesel – a version that we Brits haven’t always been offered but one that suits the car down to the ground.

The Panda 4x4 has got the lot. It’s rare enough to be interesting. It has added usability and appeal way beyond the scope of most city cars. It’s simple and should be easy and cheap to maintain in advanced life. It’s tough. It’s a giggle.

And here’s my prediction: a cared-for, average-mileage example in the right colour will never be worth less than £3000 to £4000. Buy one in five years’ time and it could be very cheap, entertaining motoring indeed.

In my book, a car becomes a classic because it (a) has lots of visual impact, (b) is highly desirable at launch and afterwards, and (c) is very much ‘of its time’. All three of these apply perfectly to Peugeot’s £32,000 RCZ R, first shown at 2013's Goodwood Festival of Speed, due for launch here very soon and – I believe – heading for a great career as one of the true classics of 2013-2014.

Sure, the RCZ has been around for a few years, but the R model is the best looking of the lot (helped by its adoption of the corporate nose) and its creators have also used all of the typical ruses of our era to make it special: fixed spoiler, extra-large-diameter black wheels, reduced ride height and special colours. The effect is impressive indeed.

Even basic RCZs are head-turners; this high-performance model’s distinguishing features will always make it stand out in a crowd, while being subtle enough to flatter those with the specialist knowledge to recognise it as the go-faster R model.

Let’s talk performance. How, nowadays, do we make cars go ever faster yet deliver the fuel efficiency that the market demands? The big move is into downsized, turbocharged engines, and the RCZ R uses one of the more extreme examples: a 1.6-litre petrol four, turbocharged to produce an impressive 266bhp (even more power than Alfa’s feted 4C), which means it will sprint to 60mph in the late fives and run hard to a speed-limited 155mph.

Better yet, its CO2 output is just 145g/km and it’ll yield nearly 45mpg on the combined cycle.

If that’s not a car that embodies the achievements of the car industry in 2013 and deserves to be feted for it in old age, then I don’t know a car that does.

I'll go for the Trekka

I had already been thinking about the Panda as a future secondhand purchase for all the reasons stated above - although I'd go for the Trekka version without the 4 wheel drive gubbins, as I'll never need it.
NickSeattle 1 January 2014

I can't see how anyone will ever quote low CO2 emissions as a reason to be collectable? other than for tax reasons, surely most of us don't care?
DBtechnician 1 January 2014

I predict some Saab's will be on the collectors list too.