BACK TO ALL NEWS
Currently reading: Citroen UK boss: 90% chance of imminent Ami UK launch
UP NEXT
Are disabled people being left behind by electrification?

Citroën UK boss Eurig Druce has told Autocar that there is now a high likelihood that the diminutive Ami EV will be officially sold in the UK.

Update: The Citroën Ami is officially UK-bound. Here's how to get one.

The short-range two-seater launched last year in Citroën's home market, and now with 10,400 statements of interest registered on a dedicated Ami website, confirmation of an imminent UK launch is said to be approaching.

"I said 75% in October, but now it's up to 90%," said Druce of the Ami arriving in the UK, adding: "if we're going to bring it, we'll do them both", referring to both the standard passenger EV and the one-seat cargo variant.

The Ami would not be converted to right-hand-drive for UK use; a Citroën UK spokesperson noted that its intended usage patterns make left-hand drive less of an obstacle than it would usually be, and actually makes it easier to exit the vehicle onto the kerb. Druce said: "That sounds like a big deal but, of course, due to the size of the car, the difference between having the steering wheel on the left or the right is probably only seven or eight inches - not a huge disadvantage".

As a 'Category 6' quadricycle with a top speed of 28mph, it would be subject to different homologation and MOT rules to a standard car, and will not qualify for the government's sub-£35,000 EV grant. Pricing remains unconfirmed, but Druce hinted at rough parity with the French-market Ami, suggesting an outright cost of around £6000 is on the cards.

Speaking to Autocar last year, Druce said there is a “huge desire” to bring the quirky two-seater to market here. “This is a true Citroën,” he elaborated. “This is absolutely what Citroën is all about. Its unconventional, it’s fun and it delivers on what it’s intended to be.”

The Ami is intended to propel Citroën into a new era of car-sharing and urban mobility. Crucially, it's classed as a quadricyle, like the Renault Twizy, which means it can be driven across Europe without a driving licence by those aged 16 or older.

Druce acknowledged that Citroën UK has imported a small number of Amis for assessment, stating that his recent drive in one around Coventry city centre "hasn't at all impacted on my desire to bring the car to the UK". 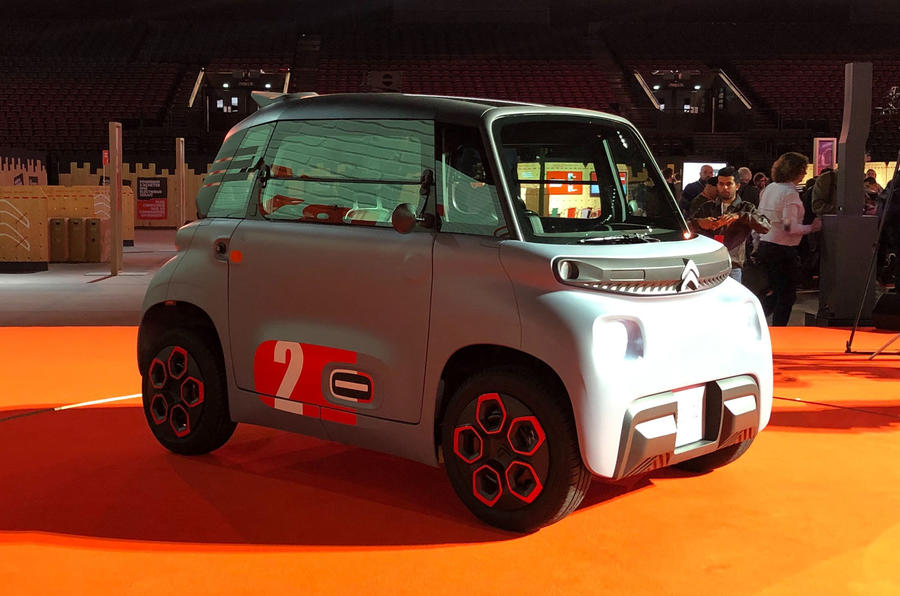 The French firm hopes that the Ami, which remains true to the Ami One concept in 2019, will appeal to a new generation of buyers as the appetite for more traditional entry-level cars, such as the C1 (which is unlikely to be replaced), wanes. It was launched in other European countries this summer.

The Ami is 90mm longer than the Twizy, at 2.41m, and has a 40mm-wider turning circle of 7.2m. Under its floor is a 5.5kWh lithium ion battery that can deliver up to 47 miles of range, while a sole motor allows it to hit a top speed of 26mph. The battery can be recharged in just three hours from a domestic socket.

Acquiring an Ami is an entirely online process, in which the EV can be delivered to one’s home or collected from a pick-up point. It will also be available in traditional Citroën dealerships, as well as pop-up stands in shops, such as French department store chain Fnac.

Citroën design boss Pierre Leclercq said the Ami and Ami One concept were developed side-by-side. "The concpet has to be more exceptional than the production car but the cleverless of the industrialisation model is the same, for example the door system and the functionality of the interior."

He added that the design was not intended to carry over into Citroën's wider model line. "The project is aside from cars - it has to be special. It doesn't have to carry the same brand identiy as broader line-up."

There's one colour available: Blue Ami, which is a coloured material rather than a paint finish, and described as having "a huge impact" on cost-saving. While the firm didn't say when the model would become profitable, a spokesman said: "We are not born to make things that are not profitable."

I drove a LHD Isetta Bubble in the '60's and wheel position made not a bit of difference.  I didn't do much overtaking so offside visibility was not important .... neither would it be on the Ami-1. I live in a remote place 1 mile from the village shops and 36 miles from the nearest town, the Ami really appeals as a local runabout, but I see one major disadvantage:  While 13A domestic plug charging at home would suffice for all local travel were I to take it 36 miles to town I'd be a bit stuffed for recharging to get back home, because the EV charging point there (which could charge a small battery in a few minutes) has only the regular EV plugs and no 13A.   But as 'an object of desire' it is so delightful that its hard to resist!

As this is not a car and is in actual fact classed as a quadricycle, does it suffer from the same safety issues that the GWizz did? Specifically, they were not safe. I also not that there is no mention of the safety rating on the Citreon website. I value my life, and I will never get in one until somebody does a Euro NCAP test on one.