A Citroën 2CV will charm you with its quirky looks, loveable character, real-world practicality and honest simplicity. We reveal how to track down a good one
Share
Open gallery
Close
Share story

A good Citroën 2CV – one that’s rust-free but needs the odd dent removing here and a lick of a paint there – costs from around £5500, with fully restored examples (new chassis and bodyshell, respray and retrim) starting at around £9000.

So one 2CV that is for sale for £93,495 must be pretty special. Indeed, it’s a rare 2CV Sahara 4x4 from 1963. The front wheels are driven by one 12hp engine, and the rears by another. Although each engine has a gearbox, there is, fortunately, only one gearstick, one clutch pedal and one accelerator. Only 694 Saharas were built, a figure dwarfed by the almost four million 2CVs that were made during the model’s 42-year lifespan (1948 to 1990) and the additional five million examples of variants, such as the Dyane, that were also made.

Generally speaking, the 2CVs you’re likely to find at more sensible prices are Specials, Dollys and Charlestones from the 1980s. They have front discs and rear drums and are powered by an air-cooled 602cc flat twin, with pushrod-operated, overhead valves, producing 29bhp. 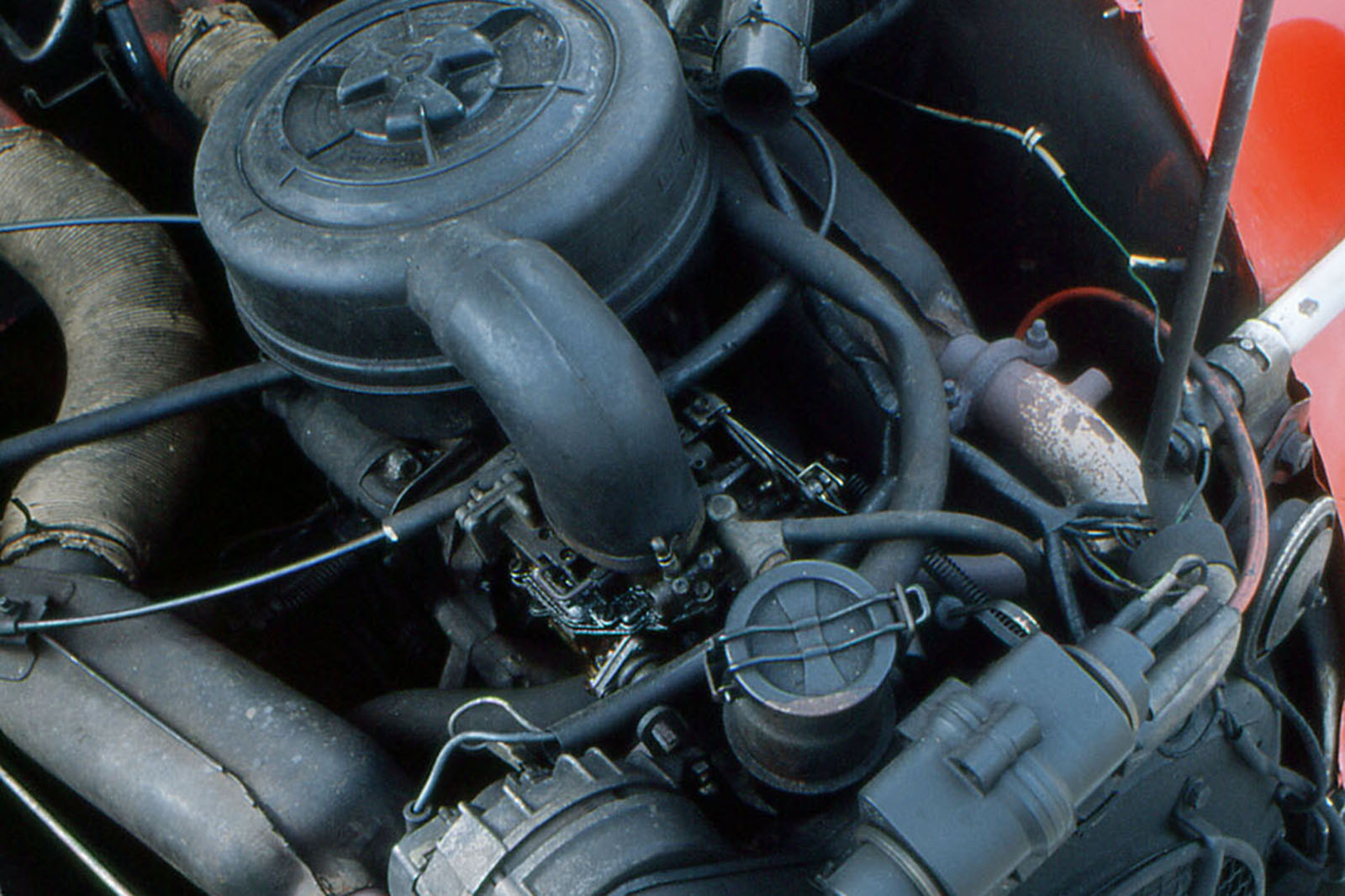 I bought a new 2CV Special, finished in Buttermilk, in 1987. It cost just £2600, but the following day, I cancelled my order because I got cold feet. Thirty years later, it’s a decision I still wrestle with. By now, without a heated garage to keep it dry, it’d be on a new chassis; if I were feeling flush, I’d choose one of the pukka steel ones supplied by the 2CV Mehari Club Cassis (mehariclub.com), fabricated using the original tools, or its galvanised equivalent – one by SLC, say.

It might have one or two new panels, possibly even a front lower bulkhead, a notorious rust trap.

I’d be a dab hand with the grease gun. The 2CV’s steering kingpins like a splodge every 1000 miles. Throughout, I’d have been obsessive about the condition of the cardboard heater tubes near the engine, which, if left to deteriorate, sag onto the exhaust pipes, at which point a ‘tin snail’ becomes Escargot Flambé (with thanks to Steve Cropley). 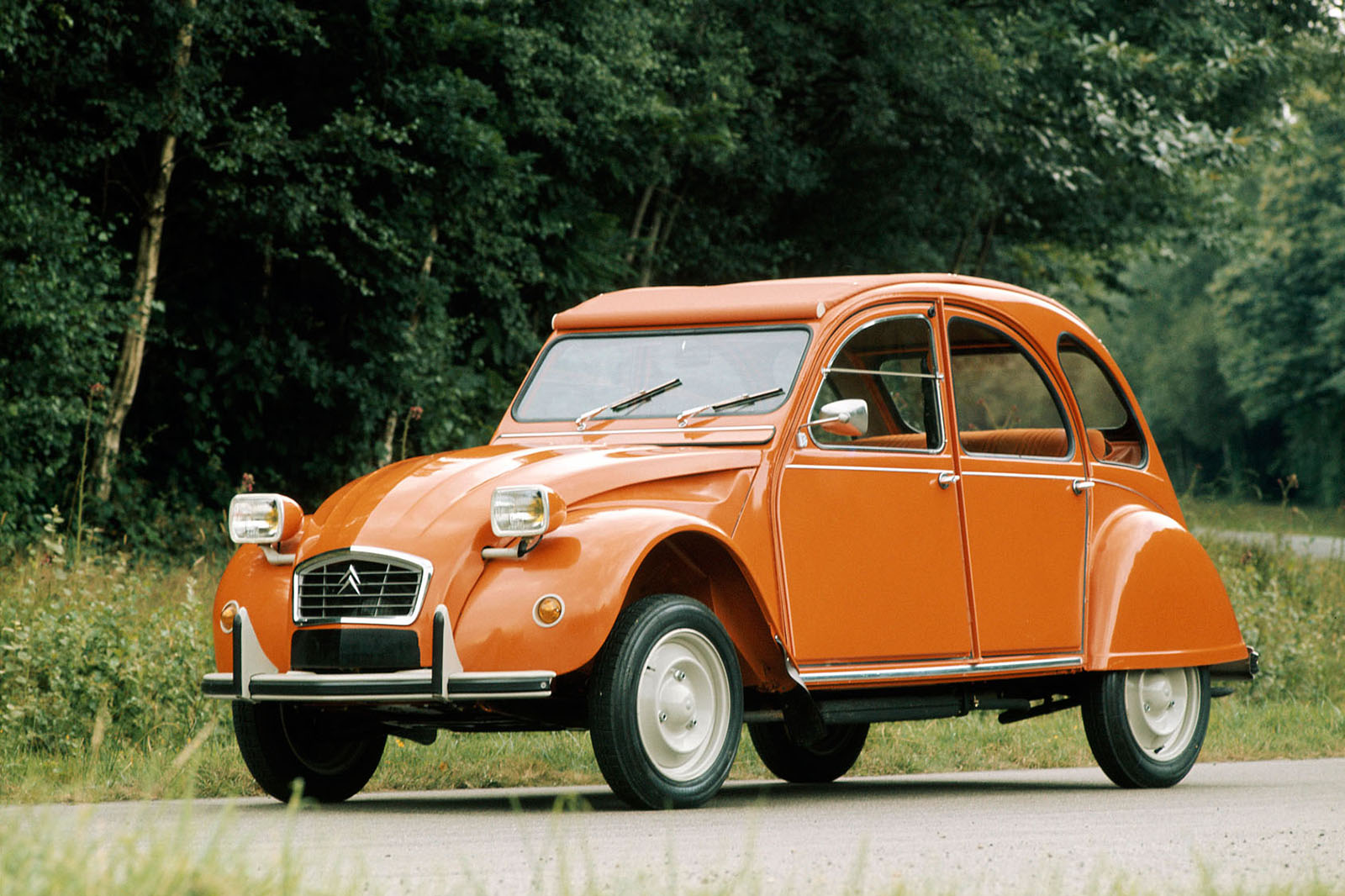 The point is, though, me and the Special would by now have forged an unbreakable bond born of a 2CV’s loveable manners, characterful design, practicality, repairability and sheer toughness. Add a reasonable 45mpg thirst and the fact that, once under way, a 2CV can hold 60mph, all the while making light work of Britain’s crumbling roads on its soft, long-travel suspension, and you’ll understand why the ‘One we found’ may be gone by the time you enquire. 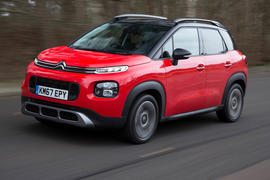 When considering a 1980s 2CV, its precise age, and even its mileage, is irrelevant: condition is all. Inspect and drive as many as you can before you buy, and learn to distinguish between those that are ‘restored’ and those that are just ‘refurbished’. Most 2CVs costing less than £6500 are refurbished and may need further expensive work. Found a good one? Buy it – and no second thoughts.

“I call the 2CV ‘the big boy’s Meccano’. It’s that simple to work on. The first thing I ask when buying one is: ‘Does it have a galvanised chassis?’ A fresh MOT is no guarantee of condition. The chassis may just have been patched up with a bit of welding. I’ve known sound-looking cars break in half going over speed humps because the chassis was rotten. To be on the safe side, buy one with a galvanised chassis but, even then, you need to check the condition of areas like the lower bulkhead.” 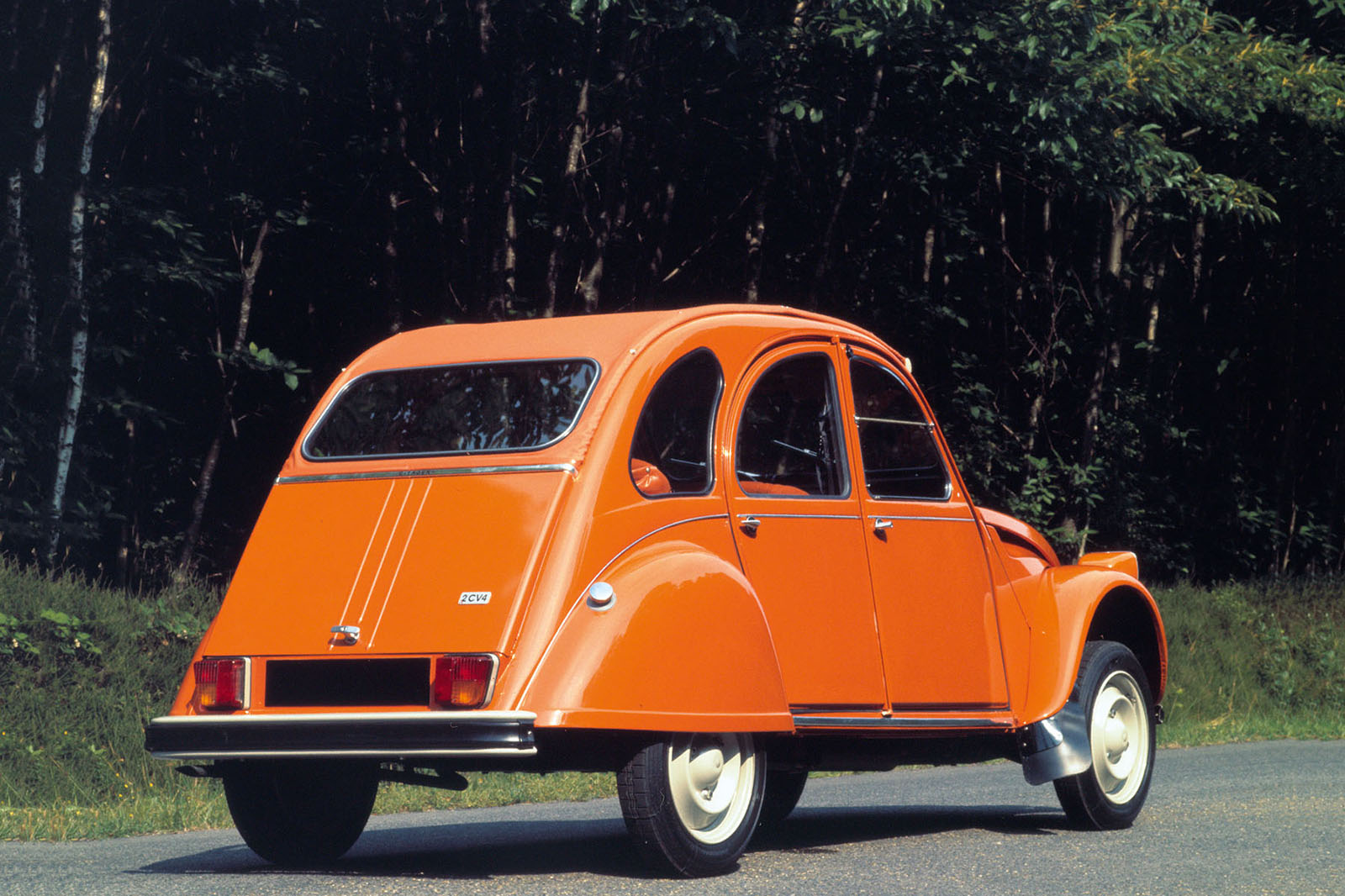 ENGINE - Check for crankcase oil pressure problems surfacing as leaks in the air filter or at the pushrod tube seals. The oil cooler can get bunged up with road dirt. Check the condition of the heater hoses (a fire risk). The engine should start instantly and run smoothly. If rattling, suspect broken piston rings or badly adjusted valves. The car should hold a steady 60mph cruise. Oil changes should be every 3000 miles and the filter swapped every 6000.

IGNITION - Electronic systems are a popular retro-fit. An Albertronic 123 system will cost about £200 fitted.

GEARBOX - Dog-leg gearchange should be smooth and crunchless. Third-gear synchro is a weak spot. Listen for noisy bearings.

STEERING, SUSPENSION - Kingpins need greasing every 1000 miles. Heavy steering could indicate a bent chassis. Suspension should be quiet and smooth.

BRAKES - Early cars had drums all round, post- 1981 cars had front discs. Both should be smooth and efficient. 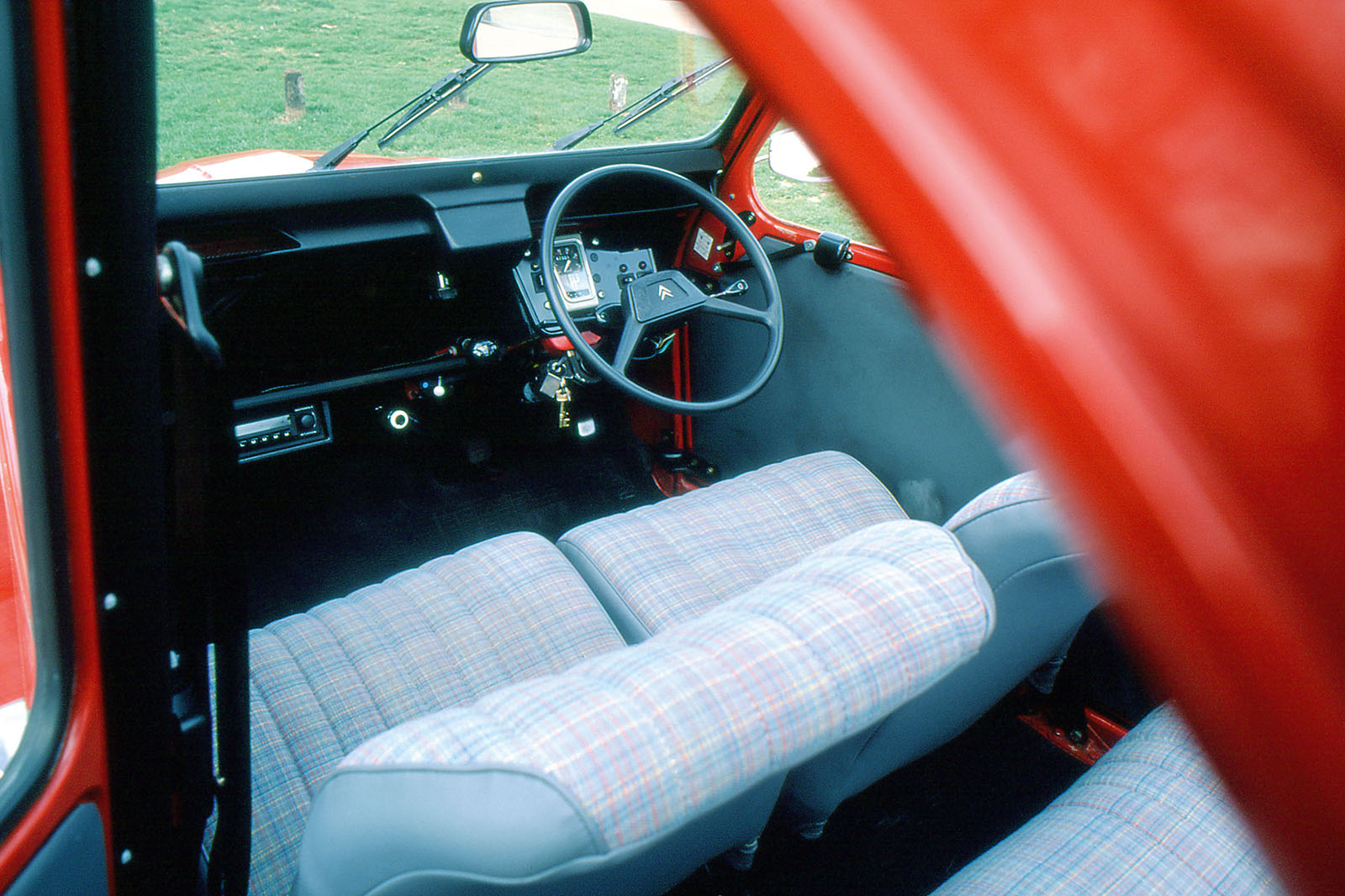 CHASSIS AND BODY - Chassis rots out and galvanised replacements are popular. Don’t ignore the condition of the lower bulkhead. A popular fix to get through the MOT test is welding it, but it’s a sticking plaster. A bad one will cause the floor to sag and doors to fit badly. Other rust zones are the rear seatbelt mounts on rear inner wings, boot floor, bonnet hinge, rear panel, windscreen surround, sills and door bottoms.

Will Waldron at Cambridge 2CV Ltd says a galvanised chassis is nice to see but there are good and bad. He says the best are made by SLC, available from Ecas 2CV Parts (ecas2cvparts.co.uk). The 2CV Mehari Club Cassis (mehari-2cv-spare.co.uk) supplies original-pattern chassis in steel.

£7000 AND ABOVE - Genuine cars, including a restored Dolly with new chassis, floor and bulkhead for £7000. Also, for £9000, a completely restored Charleston.

CITROEN 2CV SPECIAL, 1984, 45K MILES, £5690 - It has a galvanised chassis and central floorpan and the seller claims the “usual places are rust free: excellent bonnet hinge, rear quarters anddoor bottoms”. Hood is also said to be “excellent”. This two-owner car is described as being “ready to enjoy”.

Ironic that French cars always used to have soft, sophisticated suspension as their roads were much worse than ours...I wonder how the quality of French and British road surfaces compares now!

I have fond memories of selling new 2CV’s in the early 80’s along with a few scary recollections of trying to teach young novice drivers how to change gear –with a dash column and back to front!    I did buy a one year old example for my wife at that time, which she loved dearly, but decided it had to go after completing a 200 mile motorway journey in a November storm.   I occasionally saw the car on the road, still looking fab up until a few years ago.   Records show it is currently SORN and the MOT only ran out in August.   Good to know “Muttley” is still around.

Had several, along with

Had several, along with Dyanes. On the whole, I prefer the Dyane for practicality but once on the road, there's not a lot of difference. The missus and I have rolled chassis, with steering column, from one lock-up to another along city streets. I doubt we'd get away with that now. Just put the replacement body on blocks, roll the chassis under and bolt it down. Engine changes can be done in a couple of hours by one person without lifting gear (though the Law took a dim view of me doing that at the roadside.

Unless you're very careless, they're utterly unbreakable by human hand. Metal worms know their weak spots though. Mine were all quite old at the time, hence the extreme spannering.