Car manufacturing in Scotland has been resurrected after 37 years thanks to East Lothian-based Raptor Sportscars, which has launched the first of what will become a family of Caterham-like lightweights.

Scotland has not had any significant car production since the Talbot plant in Linwood closed in 1981.

Founder Andy Entwistle is a former electrical engineer who started building motorsport engines in 2001. He then diversified into producing kit cars that used chassis fabricated in Yorkshire, but the Raptor marks a new chapter. First, because it will be offered entirely built, but also because it has a chassis that is made in Scotland.

Although there is a strong resemblance to the typical ‘Seven’ lightweight, the Raptor is considerably longer than the Caterham, a fact explained by Entwistle’s 6ft 7in height. “I wanted a car that I could fit into,” he explained, when Autocar visited the company’s modest workshop to see the prototype.

The plan is to offer cars with a range of engines, with an entry-level 2.0-litre naturally aspirated Ford to a 1.6-litre Ecoboost turbo that will be offered in 240bhp and 330bhp states of tune, both having a claimed 540kg kerb weight. Motorbike-engined versions will also be offered, including a 1400cc Kawasaki motor that will rev to 10,000rpm. The rest of the drivetrain is Ford- sourced, but Entwistle says he is keen to switch to a BMW rear differential. Prices start at £22,000 for the 2.0-litre and rise to £44,000 for the more powerful Ecoboost.

“The reaction has been really strong,” said Entwistle. “People love the fact it comes from Scotland. We’ve already appointed a dealer in Florida – the first demonstrator was Saltire Blue with tartan seats.”

Caterham CEO: "I'd love to produce an aluminium-chassis Seven" 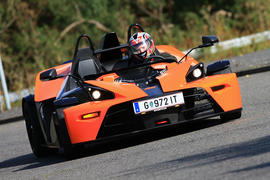 I agree in terms of size, I remember visiting the the London motor show in the seventies, and struggling to fit into a Seven as an eleven year old.

Oh, please don't offer it with tartan seats!   Please...   It's bad enough our SNP Scottish "Government" trying to turn the country in to a joke of a theme park with Gaelic road signs when nobody speaks the language...

Excellent that he's making the car longer for normal sized people!   Always looked at '7s and realised there was absolutely no chance of me getting in to them.

Linwood - I'm not saying that the millitant workfore were known for striking but they were out more often than Katie Prices's boobs.