Bentley is believed to be testing an upcoming flagship Speed variant of its new Flying Spur luxury saloon, and new spy shots show it running a plug-in hybrid powertrain.

The new Rolls-Royce Ghost rival was revealed a few months back in standard form, but these prototypes are wearing cues of a yet-to-be-revealed sporting model. These include a honeycomb grille and lower air intakes (classic Speed traits), what look like larger brakes shod in new wheels and a rear-end disguise, possibly hiding a boot spoiler.

But the most informative object on view is a second filling flap on the left-hand side of the car. That's almost certainly a charging port used in a plug-in hybrid powertrain, set to debut on the normal Flying Spur soon and seemingly also destined for the Speed. 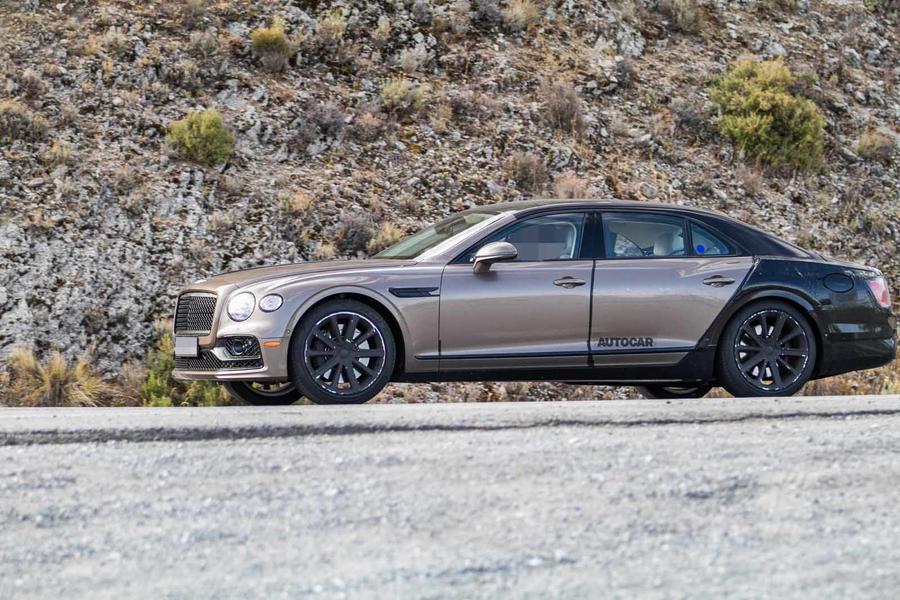 While nothing is confirmed, the Flying Spur shares its MSB platform with the Porsche Panamera, which is available with a 671bhp petrol-electric plug-in hybrid powertrain in the Turbo S E-Hybrid. That seems the natural bedfellow for the Flying Spur Speed, offering as it does a 0-62mph time of 3.4 sec in the 2.3-tonne Panamera.

With the Porsche managing a top speed of 194mph, Bentley may need to further develop the powertrain to allow it to beat the 207mph of the standard W12-engined Flying Spur.

But the economy figure of the V8-engined Porsche are certainly an improvement on the twelve-cylinder Bentley, with a claimed 80.7mpg. Similar could likely be achieved with the Flying Spur, with ultra-low emissions attractive for business users (or owners, more probably).

Expect subtle suspension revisions along with bespoke styling details inside and out for the Flying Spur Speed, along with a significantly increased price tag. A debut in 2020 is likely, although it's not yet clear if a lesser plug-in model will appear sooner.