The Bentley Bentayga Hybrid, the firm's first electrified production vehicle, is now on sale in the UK, priced from £133,100.

First revealed at the Geneva motor show in March 2018, order books for the plug-in hybrid SUV were due to open later that year. However, the launch was significantly delayed in the European market as a result of WLTP emissions certification.

A Bentley spokesman said the setback was "due to WLTP certification, with business priority placed on getting the [new] Continental GT and GT Convertible on sale in as many markets as possible".

Customer deliveries of the Bentayga Hybrid are now set to get underway before the end of this year.

The luxury plug-in hybrid is capable of up to 24.2 miles of electric-only range on the WLTP combined cycle. It couples a 126bhp, 295lb ft electric motor with a turbocharged 3.0-litre V6 petrol engine for a 0-62mph time of 5.5sec and top speed of 158mph. Total power output is unconfirmed, but it can be expected to match the 455bhp of the powertrain-sharing Porsche Cayenne E-Hybrid, while torque is rated at 516lb ft.

Unique to the Bentayga Hybrid is a range of sat-nav features that automatically calculate the "optimum combination of electric motor and engine" according to the planned journey. Three driving modes - EV, Hybrid and Hold - offer varying balances of electric and engine power, with regenerative braking working to recover energy at all times. 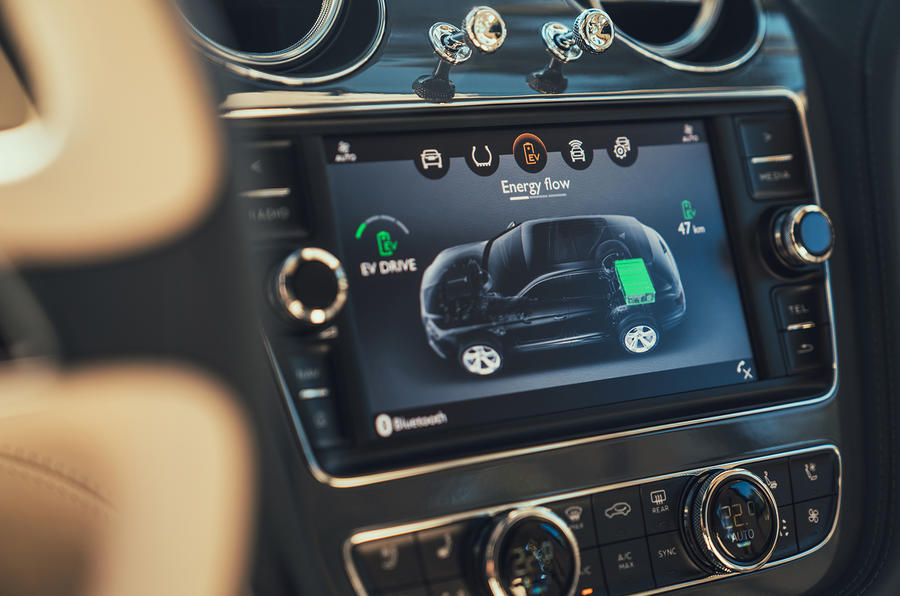 The SUV is capable of 80.7mpg on the WLTP cycle, with CO2 emissions rated at 79g/km. Bentley claims the battery can be fully charged from empty in two and a half hours.

The Bentayga Hybrid is Bentley's first step into electrification and precedes an electrified version of the firm's new Flying Spur luxury saloon that's set to arrive in 2020.

Plans for an electric sports car have been shelved, however, with boss Adrian Hallmark telling Autocar at the Goodwood Festival of Speed: "We are wrestling with multiple dimensions, and it is my belief - and it is an informed estimate, not a defined goal - that we will have the capability of building a car with the high performance and high range capabilities that our customers expect by around 2025."

Bentley boss: "We're in a rush to build an EV​"

In 2001/02 i ran an original Honda Insight for a while. It was rated at 80g/km, and actually did 67 mpg. I see VW/Bentley have managed to get this through the flawed EU tests at 79g/km so can i assume that it will do better MPG than my nearly 20 year old Honda? or is it possible this is just a fiddle?