From £64,8708
We drive Porsche's electrified Cayenne to see if it's the best blend of performance and usability in the range
Open gallery
Close

This is, officially speaking, the most environmentally friendly Porsche SUV on sale. Which is a bit like saying “the least threatening nuclear warhead” or “the easiest to park aircraft carrier”. Nevertheless, that’s how the new Cayenne E-Hybrid fits into the range.

It’s been just over a decade since Porsche first toyed with hybridising its flagship SUV. Skip forward two generations and the official economy figure has more than doubled, thanks to the use of plug-in hybrid tech. Today’s petrol-electric Cayenne claims up to 88mpg depending on spec - a figure which of course depends on you keeping the battery juiced up wherever possible.

For the first-gen Cayenne, hybrid tech offered up a bit of a USP in the market of premium 4x4s. Now it’s anything but, with all the main competitors - Audi, Mercedes, BMW and Land Rover - offering some sort of plug-in offering.

But Porsche has had time to perfect the art for the third-generation. Ditching the old Cayenne S E-Hybrid’s supercharged V6 in favour of a turbocharged 3.0-litre lump mated to a 30% more powerful rear-mounted electric motor pushes up combined power from 410bhp to 456bhp, while torque is up 81lb ft. Nearly a full second has been shaved off the 0-62mph time as a result.

More performance is bolstered by better green credentials, with a thirty percent increase in battery capacity (up to 14.1kWh) taking the all-electric range up to 27 miles - achieved via a two-hour charge from a fast-charging wallbox.

Porsche is extremely keen that the new hybrid Cayenne is not seen as a compromised choice any more. The sales pitch is that it offers the performance expected of the marque first and foremost, while offering locally green town pootling and lower running costs as an added bonus. 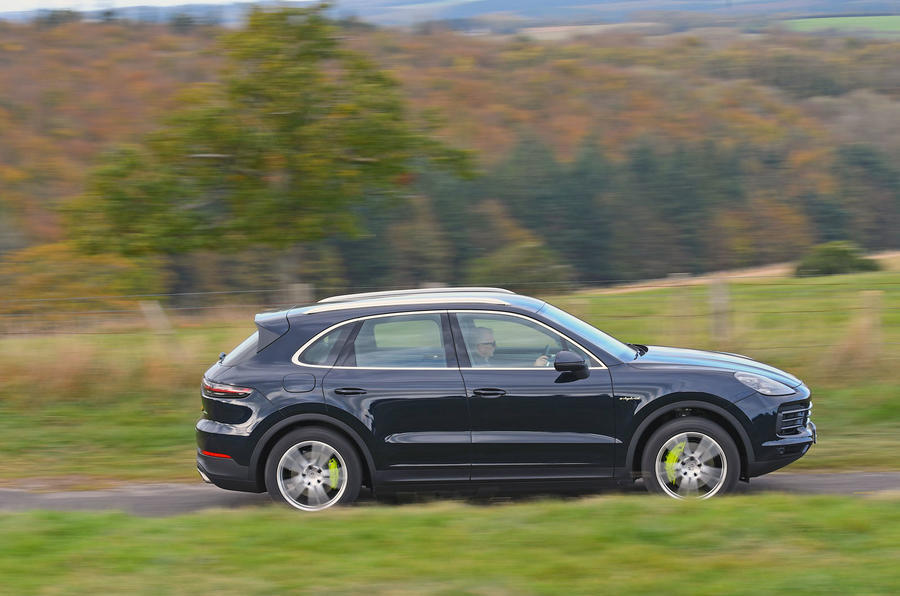 To help juggle these abilities, the E-Hybrid comes with almost as many driving modes as there are days in the week. To the usual Sport and Sport Plus modes, there’s E-Power (which runs up to 84mph in pure-EV mode) E-Hold (which stops draining the battery until you tell it otherwise) and E-Charge (which decreases efficiency to top up the battery for later use).

E-Power also has an electric-only launch control feature, though with 134bhp of EV power available it’s more Nissan Leaf than Tesla. Best, in our view, to leave it in Hybrid Auto mode most of the time, where the car’s clever electronic brain balances the two power sources in a commendably smooth way.

It means you find yourself driving in a very un-Porsche fashion, brushing the throttle with a featherweight touch to try and keep the engine off as long as possible, with one eye on a little electric power limit dial in the instruments. It’ll do this even once run out of charge with braking and coasting energy recuperation, meaning over 30mpg is easily within reach even if you never go near the wallbox.

If you do plug-in, you’ll find a realistic range figure in the low twenties, so plenty for a school run and a good chunk of the average commute. You’ll get exceptional refinement, too - though even when the petrol engine is re-activated its distant, cultured note is far from unpleasant.

When you’ve finished playing the eco-game and remember you’re in a Porsche, the E-Hybrid delivers enough performance to outgun a 718 Boxster. Certainly, we foresee few situations in Britain where you’d want or need to go faster than this in a two tonne-plus luxo-SUV, making the Cayenne Turbo seem a touch excessive.

There’s little savagery in the power delivery - instead, in combination with the silky smooth eight-speed Tiptronic box, it delivers effortless punch no matter where you are in the rev range. The only time powertrain can be knocked out of sync is if you floor the throttle and then back off, when the Cayenne holds onto a low gear for a few seconds longer than is necessary.

Despite weighing in at over a quarter of a tonne more than a Cayenne S, the E-Hybrid’s weight penalty isn’t substantially apparent in the bends. It’s helped in the case of our car with the £1,500 adaptive air suspension - an option worth having - helping it to do a better job at disguising its mass than any similar rival.

During very quick direction changes it does feel less tied-down than a non-electrified Cayenne, where the lack of the Turbo’s active anti-roll bars allows some movement. But dial it down a notch and it’s still more controlled and predictable than a Range Rover Sport or even a BMW X5.

It’s more respectably competent than downright engaging, but you’d buy the more athletic Macan (or better still something not SUV shaped) if that’s what you wanted. And anyway, on air and with our Cayenne’s (relatively) modest 20-inch wheels, the cabin is so well isolated from poor road surfaces even firming up the dampers doesn’t dent comfort a whole lot. 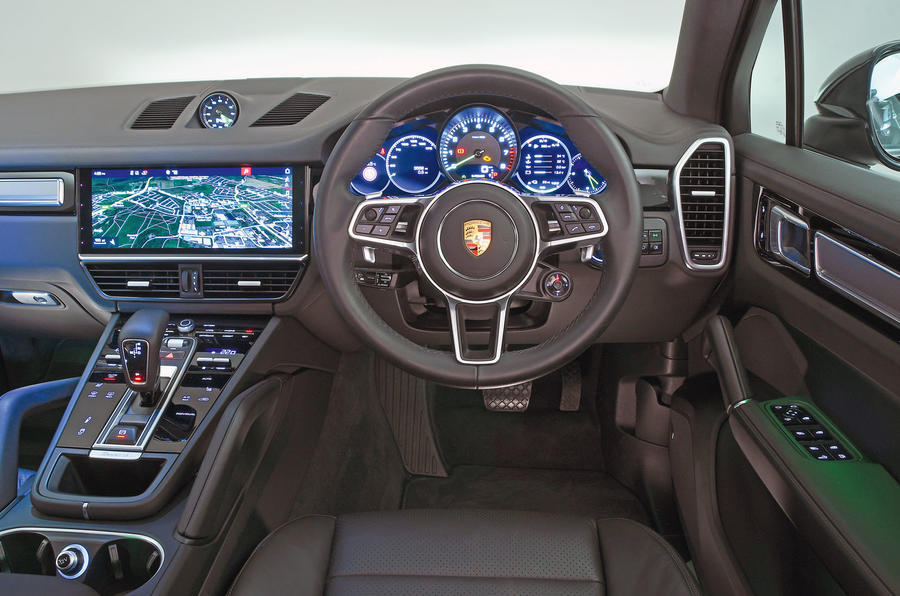 There is one dynamic black mark, however, and it concerns the brakes. Energy recuperation is nothing new, but even Porsche seems unable to mask the usual character traits of inconsistent pedal feel and grabbiness here. It takes a fair bit of getting used to, and you’ll find coming to a smooth stop tricky until you do.

Brakes aside, the Cayenne E-Hybrid is now a more resolved prospect than petrol-electric Cayennes of old. It feels more like the Swiss army knife it’s marketed as - a convincing hybrid with (almost) no day-to-day compromises in the pursuit of efficient performance.

With an impeccably finished cabin, cleverly integrated tech and plenty of space, it’s a very satisfying package. It’ll even tow (unlike many hybrids) thanks to the torque converter ‘box. At £67,000 before the extensive options list has been perused, it’s pricing is neatly in line with rivals, too. With no Cayenne diesel in the plan after Porsche axed the fuel from its lineup, the E-Hybrid makes a compelling case for itself.

Admittedly, it’s still £12,000 more than a base V6, a car which handles more sweetly on account of its relative lack of weight. But company car drivers will offset that cost in a couple of years thanks to dramatically lower Benefit in Kind tax. The E-Hybrid is just about the least dynamically engaging Porsche on sale, but its combination of performance, comfort and usability means it’s no longer a Porsche to be avoided.

But it still handles better than the X5 or RRS. Not for me though, bring back the diesels...!

As someone who has run a Panamera 4 E-Hybrid for the last year, I can say from actual experience that there are considerable benefits for many folk from a Porsche PHEV, even those like me, who with a personally owned car, do not get any BIK tax pay back. I note that an article some time ago in one of our newspapers said PHEV vehicles are rarely plugged in and only bought for BIK reduction. That is complete rubbish from what other Panamera (and other PHEV) owners tell me and my own experience. Many of them have a charger at their office as well as at home (like me) and plug them in to charge at least once a day and often twice. As I result, I now have to put in petrol less than once a month instead of three times or more with my previous 911 Turbo. That is a significant saving in expense and CO2.

It is basically a tax fiddle

It does not stack up financially  to the private buyer,nor the  drivability, just a tax dodge to justify an overweight lump, much prefer the petrol one . For a Company owner then get the cheapest ev and pay little tax for running about in  and then get a jolly good v8 petrol and claim mileage as it is a PRIVATE CAR AND NO COMPANY TAX.