BACK TO ALL NEWS
Currently reading: All-new Lotus Emira priced at £75,995 in First Edition trim
UP NEXT
Sorry, wrong number: the forgotten problem of car clocking

Lotus’s first brand-new series-production model in more than a decade is a stunning mid-engined, two-seat sports coupé with supercar-aping looks, a high-quality interior and the option of four-cylinder turbo power supplied by Mercedes-AMG.

The Emira (pronounced ‘eh-meer-ah’) will eventually be priced from £59,995 and is pitched at what Lotus believes to be a gap in the market below higher-performance versions of the Porsche 718 Cayman.

It will go on sale in all key global markets next spring, initially powered by the Toyota-sourced supercharged 3.5-litre V6 from the outgoing Exige and Evora, before the 2.0-litre AMG unit follows in the autumn. The first version on sale will be the limited-run First Edition, which brings the V6 engine and a choice of manual or automatic gearboxes for £75,995.

Bespoke First Edition touches include a set of two-tone 20in alloy wheels, branded brake calipers, a tyre pressure monitoring system, black contrasting lower trim and 12-way adjustable heated seats. Buyers can choose from six exterior and seven interior colours, while the standard-fit Design Pack brings privacy glass, a black Alcantara headliner and sports pedals. The First Edition is also equipped with the Drivers Pack which offers the choice of 'Tour' or 'Sport' suspension, and can be specified with either Goodyear Eagle F1 Supersport or Michelin Pilot Sport Cup 2 tyres.

The Emira will be Hethel’s final non-electrified car. It follows the limited-run Evija electric hypercar in this promising new era for Lotus under the majority ownership of Geely, which is funding not only new cars but also new facilities and manufacturing processes with the aim of products being built to a higher and more consistent quality.

Underpinning the Emira is Lotus’s new Sports Car Architecture, which was developed using the extruded and bonded aluminium chassis technology first used by Lotus on the Elise of 1996. The car is 4412mm long, 1985mm wide and 1225mm high, with a wheelbase of 2575mm, making it just a fraction larger than the Evora. 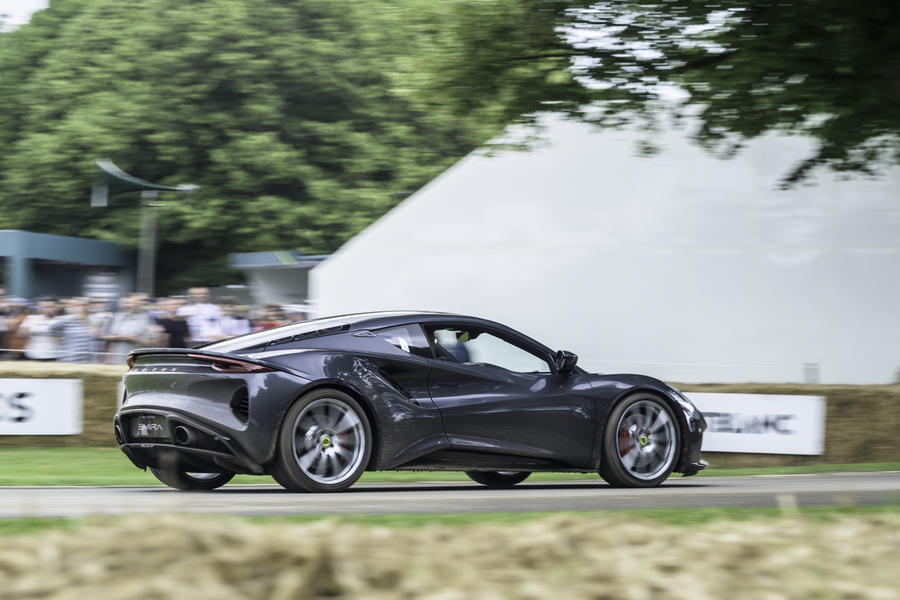 While the architecture is nominally a development of that older car’s, only the wheelbase remains the same. The tracks have been widened, larger 20in wheels can be fitted and the Emira has dramatically different proportions to the Evora.

The first deliveries will be special, higher-spec Launch Edition cars using the Toyota V6, which will be offered with a manual or automatic gearbox. The AMG four-pot (which became available through a new technical partnership between Lotus and AMG, born of Geely’s stakeholding in AMG parent firm Daimler) has been given its own tune for Lotus, along with a bespoke air intake and exhaust. It will come exclusively with an eight-speed dual-clutch automatic gearbox.

Both versions of the Emira have their engines mounted transversely and powering the rear axle alone. Lotus hasn’t yet confirmed final performance figures for either version of the Emira, rather that there will be a range of outputs between 355bhp and 395bhp, alongside maximum torque of up to 317lb ft.

The 0-62mph time will be less than 4.5sec and the car will be able to reach a top speed of more than 180mph. CO2 emissions, meanwhile, will officially be below 180g/km.

In terms of design, the Emira takes heavy influence from the new Evija, sitting low and wide with prominent intakes, short overhangs and bulky haunches among its defining characteristics.

Styled by Lotus design boss Russell Carr, the Emira has been made more usable and fitted with more technology than any Lotus before it.

That modernisation push extends most obviously to LED lighting at the front and rear and, on the inside, a 10.25in touchscreen for an infotainment system that includes Apple CarPlay and Android Auto as standard, along with a 12.3in digital driver’s information display. 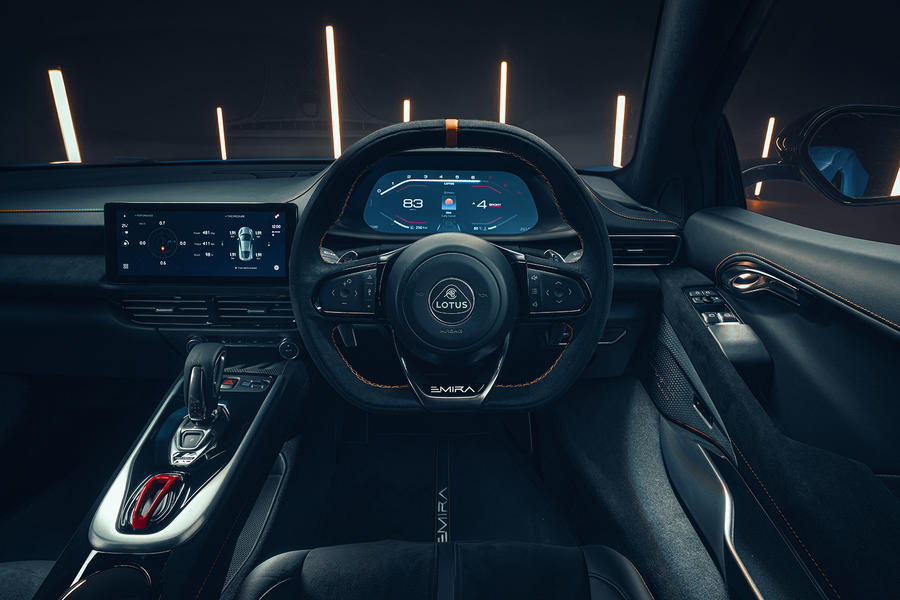 The interior is completely unrelated to that of any previous Lotus. It is not only easier to get in and out of but also more spacious in its feel (ingress, egress and head room are claimed to match the class leader), trimmed in higher-quality materials and fitted with an array of clever tech and storage integrations.

These include twin central cupholders and extra storage in larger doorbins. There’s a 208-litre cargo hold behind the seats and 151 litres of space in a boot behind the engine.

Despite all the new tech and richer materials, some classic Lotus features, such as a semi-exposed gear linkage on manual cars, are retained. Adaptive cruise control, an anti-collision system, fatigue alert, road sign detection, a speed limiter, lane-departure warning, rear cross-traffic alert and lane-changing assistance all feature as part of the ADAS (advanced driver assistance systems) suite. This is made possible by a new electrical architecture taken from Geely but adapted to Lotus’s needs.

All these advancements in making a more usable everyday Lotus don’t come at the expense of the driving performance, Lotus insists.

As managing director Matt Windle put it, these features have been added to “make it appeal to another set of buyers while retaining the same core Lotus dynamics”. 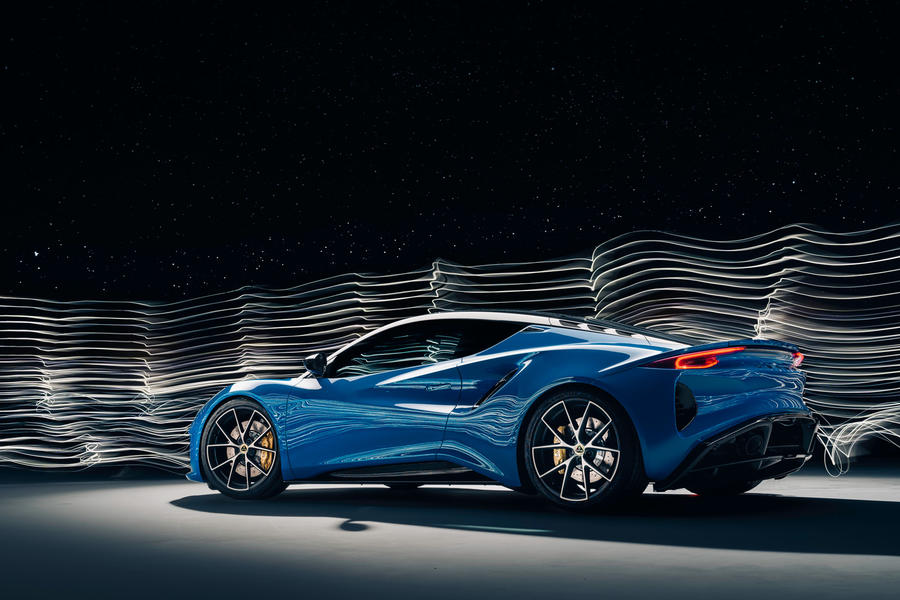 The Emira uses double- wishbone suspension all-round and retains hydraulic (rather than electric) steering, which will delight Lotus purists.

Two chassis settings will be offered: the standard Tour, which allows a softer ride, and the stiffer Sport, which will be offered with an optional Lotus Driver’s Pack. This includes launch control and Michelin Pilot Sport Cup 2 tyres in place of the standard Goodyear Eagle F1 Supersport rubber.

The Emira doesn’t feature any active aerodynamics but instead produces balanced downforce between the front and rear that provides more grip in corners while retaining precise, predictable handling.

“The Emira has a wider track than any recent Lotus road car, enhancing stability, delivering exceptional roadholding and giving the sensation of a very low centre of gravity,” said Gavan Kershaw, Lotus’s director of vehicle attributes. “It’s a true Lotus sports car that builds on the legacy of the Elise, Exige and Evora.”

While the Emira is around 5kg heavier than the Evora, at 1405kg, it has still undergone a series of weight-saving measures to compensate for the significant increase in technology and features that have been introduced, which would otherwise have made the car notably heavier.

The vehicle architecture is constructed at a new factory in Norwich called Lotus Advanced Structures in a more automated process, before being transported the 10 miles to the company’s base in Hethel. Here, the car is built in a semi-automated fashion in a new 12,000m2 factory that was previously known on site as the ‘skeleton building’. It had sat incomplete for a decade in the wake of the failed attempt to kick-start Lotus’s reinvention under Malaysian firm Proton.

The total investment in UK production facilities by Lotus now totals £100 million, and includes a new automated paint shop at Hethel. “I really want to take us to the next level of quality,” said Windle, adding that there will be a greater “consistency of build” between Emira examples, thanks to the modernised production processes, while still retaining an authentic hand finish to the cars.

Perceived quality will also be significantly improved over recent Lotus cars, Windle said, thanks to the rigid standardisation of key aspects, including paint finish. 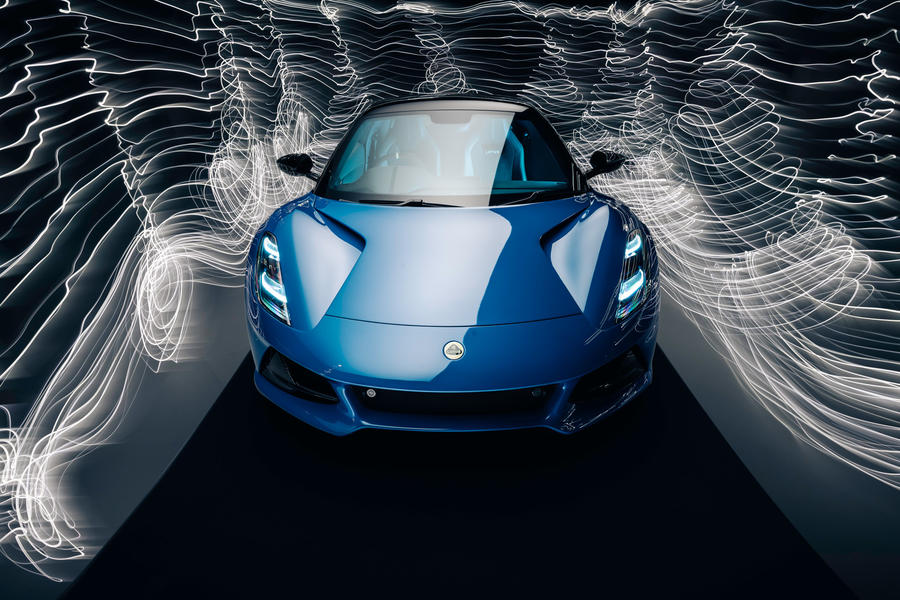 Lotus wants to produce up to 4800 Emiras per year, which would represent a significant increase over the 1400-1600 Elise, Exige and Evora models it was previously selling. Windle is confident that the market exists and that the Emira’s appeal is far greater and broader than any other previous Lotus, thus bringing new buyers to the brand.

The Emira is the first car to emerge from Lotus’s Vision 80 plan, which was devised under previous boss Phil Popham to guide the firm towards its 80th anniversary in 2028.

It will be the final Lotus launched powered solely by an internal combustion engine and without any form of electrification. As well as a new electric sports car codeveloped with Alpine, Lotus will produce electric SUVs, which are set to be built at a new factory in Wuhan, China.

Elise and Exige production will end in Hethel later this year, with both cars almost sold out. Evora production has already concluded.

New cars from Lotus don’t come along too often. How did you approach such a significant project?

“The great thing is that there has been lots of pent- up creativity to get out, and every project we approach with a huge passion and excitement. On this car, the big design approach was to create a car with drama, glamour and the exotic nature of a supercar but positioned in the sports car category that was approachable for everyday use and moved the game on for quality.

“Being honest, we know that there’s some serious competition, so we have to push further, and Lotus has always been sportier than its competitors historically. We’re unashamedly picking up on the Evija, which brings a certain glamour instantly. The point of that car was to be a real statement for the company, so it would be foolish for us not to use it as a stepping stone.”

Why was the interior so dramatically overhauled?

“From the moment you get into the car, there are no surprises. It’s straightforward to get into, there are plenty of places to put bits like sunglasses and bottles and there’s plenty of storage as well. You can use it every day without compromise – to the airport or for business use, for example. You don’t want the car to ask anything of you; it will support you without any stress. But if you want to be [Lotus attributes director] Gavan Kershaw when driving it, it can be that too.”

Sports cars tend to stay on sale for a relatively long time. How do you design for that longevity?

“Everything has to be there for a reason. It’s important to make a car beautiful, memorable and modern. Be honest in what you do and avoid just trying to be fashionable and be a little bit reserved. You don’t want to stamp on creativity or excitement, but it’s very easy to fall into being 13 again and putting big jet engines or tailplanes on it. You have to get the balance. Sometimes you can feel the hand of [Colin] Chapman on your shoulder guiding you...”

How did you harness technology in developing the Emira?

“We do a lot of digital modelling but always have a full-size clay model. We also use virtual reality for the interior. Before you make the clay, you have a good but rough digital design model that you can look at in 2D, but you can also put VR goggles on and feel as if you’re sitting in the car before committing to clay.”

Log in or register to post comments
BlahBlah43 21 September 2021
I'm not all about specs, but to be that much slower than the prior gen Evora is dissapointing. Especially considering the Evora had a manual transmission with it's times
TStag 20 September 2021

Looks like it will be a cracker. Problem is the sports car market is tiny and Porsche dominates. Very hard for Lotus and Alpine. Lotus / Alpine and Jaguar should do a deal to share sports car components it could be the only way any of them can take on Porsche

It's nice to see another alternative to the Cayman/Boxster. So now along with the Alpine you have two wrong choices to choose from.