BACK TO ALL NEWS
Currently reading: Electric Lotus SUV due in 2022 with 750bhp, 360-mile range
UP NEXT
2024 Mercedes C-Class EV spearheads brand's electric rebirth

Lotus is already far into the development of one of the most important models in its history: the Lotus Eletre, an SUV tasked with generating sales volumes the British marque has never seen before. It’s the key component in Chinese parent company Geely’s commitment to “restoring Lotus into being a leading global luxury brand”.

Autocar has learned that the high-riding model, internally codenamed the Lambda, will adopt fully electric power from launch in 2022, rather than hybrid propulsion, as was originally believed. Production will also centre on China, where demand for premium electric vehicles remains strong.

Conceived under former Lotus boss Jean-Marc Gales, the SUV project first surfaced in 2016. At that time, it was understood the intention was to initially launch the model with a high-performance petrol-electric powertrain like those used by Geely sibling brands Polestar and Volvo.

However, the EV market was significantly less mature than it is now – particularly in countries such as China, where more than 1.2 million electric cars were sold last year – and incentives to encourage people into EVs remain common. It’s understood Geely therefore reversed the decision to make a combustion-engined version of the Lotus SUV to arrive ahead of the all-electric one.

Lotus wants the new model to lead the brand’s volume growth, particularly in places such as China and the US. The initial goal is to more than triple sales in the next few years, taking Lotus from 1500 to around 5000 units annually, and beyond that in future.

The first big step of this volume growth plan is the ‘new Esprit’, a V6-engined hybrid sports car that’s due next year.

With Lotus’s base in Hethel, Norfolk, undergoing major renovation, the SUV could in theory initially be built there, because its capacity is for up to 10,000 cars per year. However, it will be reserved as the brand’s sports car base. 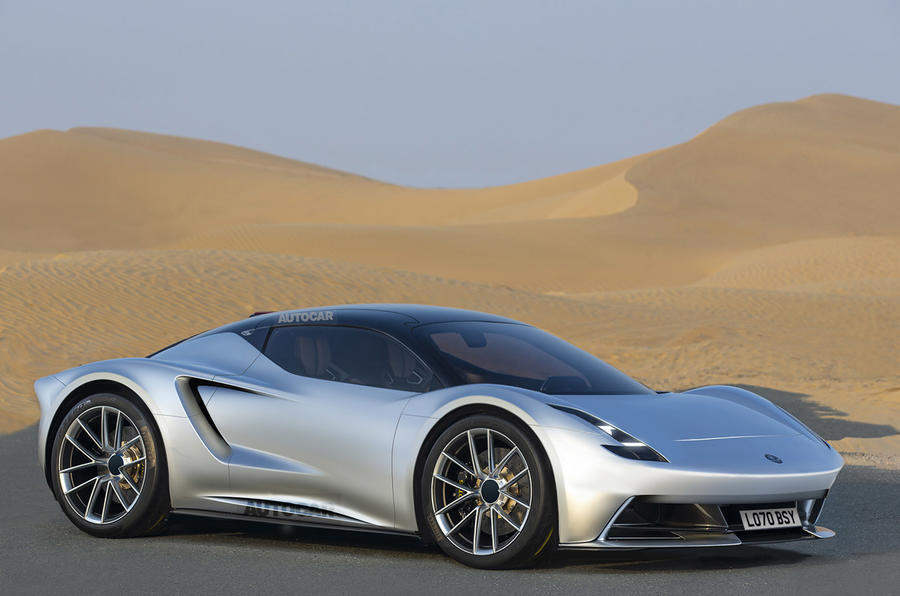 Instead, Geely will seek to make use of the greater economies of scale and lower costs of a recently finished £1 billion factory in Wuhan, China, with an annual capacity of 150,000. Much of that is for home-market Geely products, but a special section will be set up for building the Lotus SUV.

It’s possible other Geely factories around the world could also produce the SUV, depending on demand.

At the core of the SUV is an adapted version of Geely’s recently announced Sustainable Experience Architecture. Lotus is able to cherry-pick the best of the group’s components, while all engineering decisions still go through Hethel.

Lotus is understood to have worked extensively on material usage for its SUV to ensure that, even with a heavy battery, lightness remains at its core. In 2017, Geely design boss Peter Horbury admitted that the SUV is “never going to be as light as an Evora. But I’m sure if you’re calling it a Lotus, it has to be the lightest it can be of that genre.”

Given that the Tesla Model X weighs just over 2500kg in top-flight P100D form, Lotus could be aiming for the twot-onne mark with its SUV.

That would make the expected EV propulsion level more than sufficient. Autocar understands that two variants will be offered: a base model approaching the 600bhp mark from a dual-electric-motor powertrain and a flagship variant offering up to 750bhp and an even more substantial torque figure.

That should give the Lotus SUV the necessary firepower to take on the Model X, as well as any number of planned rival electric performance SUVs.

Range is understood to be competitive, too. Lotus’s target is 360 miles, with an ambition to go beyond that.

Despite production taking place in China, engineers at Hethel are taking the lead with regards to chassis and powertrain development. Knowledge gained from the Evija electric hypercar will inform the latter, while Lotus’s expertise in ride and handling should result in a driving experience more athletic than that offered by most SUVs.

Lotus declined to comment on its SUV but said the firm has “a very bright future” due to “continued significant investment”, adding that its “focus is to deliver the best driver’s cars in the business”.

An unveiling event for the Lotus SUV will be held in 2022 before sales start in 2023. Pricing is set to be competitive with volume-produced rivals.

In China, I'm guessing that Lotus as a brand has great value, whereas its specific history bears no reflection on its future. MG has proven very successful, selling over 270,000 vehicles in 2019 worldwide. If Geely can sell thousands of electric Lotus SUVs in China, who cares, especially if some of the revenue generated is invested in production in Norfolk?

...that their SUV should be the Lotus XC60? Following in the footsteps of the the Lotus Cortina, Lotus Sunbeam, and Lotus Carlton. They don't need their own platform: just an amazing chassis and steering tune, a menacing but understated restyle and a 500bhp retune of the T8 powertrain. I'll have mine in metallic BRG rather than Norfolk Mustard thanks.

...that their SUV should be the Lotus XC60? Following in the footsteps of the the Lotus Cortina, Lotus Sunbeam, and Lotus Carlton. They don't need their own platform: just an amazing chassis and steering tune, a menacing but understated restyle and a 500bhp retune of the T8 powertrain. I'll have mine in metallic BRG rather than Norfolk Mustard thanks.

....but if they want the vehicle to truly be view as its own car, they would have to get in on the ground level of its donor platform, much like Porche did.. With the XC60 being fairly fresh out the door, it would be several years before they would the fruits of their labor. With the 90 Series, though, being the oldest of Volvos recent vehicles and probably already involved in their updating process, this would the right time to make their presence felt. And there would be a LOT of work, if they are going to add Lotus values to a vehicle that is already designed to carry heavy batteries from jump! Well they many have their work cut out for themselves, I'm sure they can make it work. But 500-750 bmp is Porsche Cayenne Turbo territory,  so it will not be for the faint of heart and those of little means. But some on this thread claim that Lotus' drop in value faster then they go in a straight line, so their may be some great deals on a used Lotus XC90!