BACK TO ALL NEWS
Currently reading: All five-star ratings in latest Euro NCAP test batch
UP NEXT
Key BMW and Mini models lose diesel engine options

The latest batch of Euro NCAP crash tests has returned a full house of five-star ratings, with the Volvo XC60 SUV being highlighted the safest car ever tested by the crash safety body.

The XC60 scored 98% for adult occupant protection, 87% for child occupant protection, 76% for pedestrian safety and 95% for safety assistance systems, the highest results of any car since the larger Volvo XC90 scored 97%, 87%, 72% and 100% when it was tested in 2015. The XC60, according to Matthew Avery, Thatcham's research director, the XC60's reduced weight, advanced assistance technologies help it to achieve such a high rating.

Thatcham Research, Euro NCAP’s UK testing facility, brought attention to the fact that the C3 Aircross and Crossland X are not fitted with automatic emergency braking (AEB) as standard but made up for its absence elsewhere. These were the only cars in the batch without the system. By contrast, the XC60’s AEB system avoided collisions at all speeds tested.

Avery explained that following pushback from manufacturers, AEB will not be mandatory for a five-star NCAP rating until next year. A buffer period between 2014 and 2018 was introduced to give manufacturers time to make the tech standard and still achieve top ratings in the meantime. Today, a more advanced lane keep assist system but no AEB can garner a car a five-star rating.

A Citroën spokesman said: "The specification of each Citroën product range is under constant review. We work hard to ensure every model is optimised in the context of customer demand, the competition and, of course, all legislative requirements. With regards to the C3 Aircross, following a product review here in the UK, Flair versions will be equipped as standard with Active Safety Brake from January 2018 production. The system will remain an option on the Feel trim level."

Avery said: “It’s exceedingly rare for a vehicle to score so favourably across the board. The XC60’s standard-fit safety technologies are excellent, or rather those that we were able to test are - its Turn Across Path and Run Off Road systems are not yet a feature of the Euro NCAP programme.” 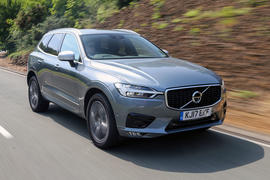 What worries me about this

So 5-star supermini meets 5-star large SUV head on - which do you want to be sitting in???

I think iirc that the deformable ram/barrier the test car hits or is hit with is altered and represents the car being tested, ie smaller for city cars larger for big suvs etc. Which I've always thought calls into question the point of the test. I may be wrong but that is how I understand the tests to be carried out.

So what is the safest car overall?

Thanks si73, was helpful answer.

So what is the safest car overall? The heaviest car with 5 stars, or is not that simple?

Thanks si73, was helpful answer.

So what is the safest car overall? The heaviest car with 5 stars, or is not that simple?

Having re read the procedures, the test where the car is driven at a deformable barrier to replicate an offset head on collision, the barrier is rated at the same weight of the car tested, however a test is also carried out against a full width rigid barrier that isnt weight rated, this is to test restraint systems, and the side impact tests are also not weight rated, so it is difficult to say how much safer a large car is against a small car with the same rating, but physics would suggest the bigger and heavier, the safer, especially in head on collisions. It still amazes me that they dont test for being rear ended by large vehicles with an obstruction in front as has happened where a stationary car in a que has been hit hard by a van or truck and caused serious injury.

We now all need to buy SUVs

in case we get crashed into by an SUV

Because that is what the buying public want.

Because that is what the buying public want.

Rubbish. The only SUV in the top 10 is the Squashedcow.