BACK TO ALL NEWS
Currently reading: 2022 Ford Focus ST ramps up for mid-life overhaul
UP NEXT
MST Mk1: Is this the ultimate rally recreation?

The Ford Focus is being readied for a mid-life facelift to ensure it remains competitive against newer rivals including the Volkswagen Golf, Skoda Octavia and BMW 1 Series.

A lightly camouflaged prototype of the hot ST version has now been spotted testing on public roads, giving a closer look at the design changes that will take the Ford into 2022.

The most obvious change will be a new-look front end that bucks the industry trend with a smaller grille than that of the current car. The headlights have been slimmed down for a more aggressive look, and bulkier camouflage around the lower half suggests we'll see new foglights and air intake designs as well.

A similar treatment will apply to the rear end, where the current car's brake light clusters will make way for slimmer, more heavily angled units, while the boot lid recess looks to have been raised slightly to bring the numberplate more in line with the rear windscreen.

Red brake calipers, beefy twin exhausts and performance-style alloy wheels give this test mule away as the full-fat ST, which should be unveiled at the same time as the standard car given its production-ready look. Most interestingly, it's wearing a new and distinctive shade of bright green that looks to be a close match for the 'Ultimate Green' worn by the second-generation Focus RS. Whether this will be an option for the standard car or reserved for a limited-run special edition remains to be seen. 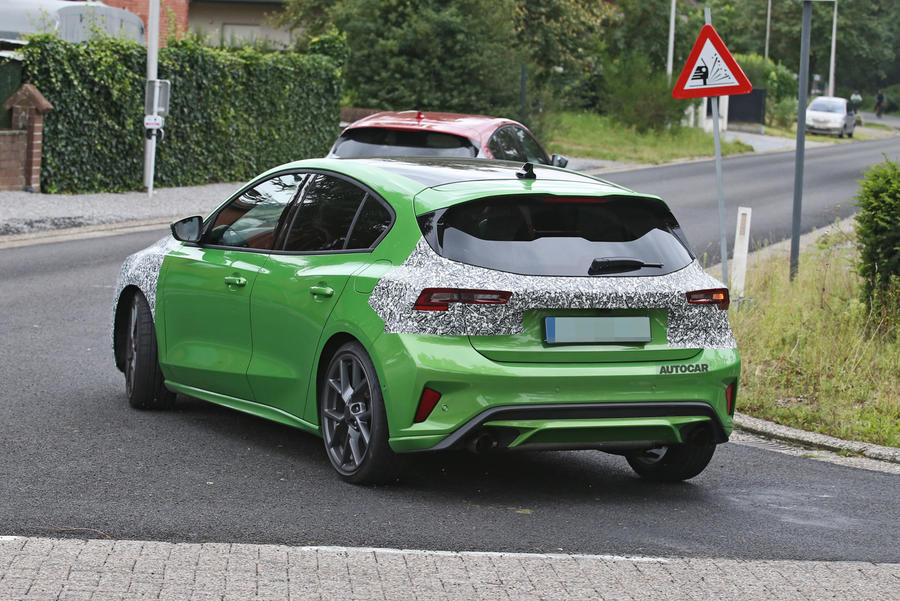 No details have emerged yet in terms of tweaks to the Focus's powertrains, but the engine line-up was recently revamped to include a new 1.0-litre mild-hybrid petrol option in two states of tune. That is expected to be carried over along with the sole non-electrified petrol option.

The Focus, unlike its Fiesta sibling, remains available with a choice of EcoBlue diesel powertrains: a 1.5-litre turbocharged four-cylinder and a larger 2.0-litre unit. The Fiesta supermini recently became petrol-only in the UK, with Ford citing "very, very low" diesel sales, but the relative ongoing popularity of the fuel in the larger family hatchback segment suggests diesel could be retained in at least one form for the updated Focus.

The interior is likely to see only subtle tweaks, given that the current car shares the bulk of its cabin design with the Focus's newer Ford Puma and Kuga stablemates, but enhanced connectivity and driver aids could be ushered in. It is not yet known whether the Focus will benefit from Ford's new strategic partnership with Google, which will see all models use Android-based infotainment systems from 2023 onwards.

Ford and Google unite to 'reinvent' the connected vehicle​

@citytigger. Why, because there's a big gap between the weedy 1 litre and the fire breathing full fat ST. 155hp might impress you but it's is still only capable of 9.5 seconds to 60 time when in 1 litre 3 pot form.  Probably driving some folks to the versions no doubt.

manicm 30 August 2021
To someone who commented on the interior, after VW’s latest infotainment systems all is forgiven.

I had a mk1 Focus, and yes some of the interior was bitty, but after a while you just don’t give a s**t. It was reliable and that’s all that matters really.