This, then, is the £30,000 Ford Focus. No, not the crackling, warm-blooded Focus ST, but the slightly higher-riding Active X car, adorned with ostensibly protective (but more realistically decorative) plastic body cladding, specified in plush Vignale range-topping trim and - in this case - equipped with a new mild-hybrid version of the entry-level 1.0-litre Ecoboost engine, the only petrol option now available.

The 48V system is familiar from the Ford Puma crossover and has been introduced to the Focus - at the same time as the Fiesta - as a means of eking out a few more miles between fuel stops and cutting down on emissions. Ford claims an efficiency boost of up to 17% over the outgoing 1.5-litre engine, with MPG up from 48.7 to 51.4. It’s available in both 122bhp and 153bhp forms, the latter of which we’ve tested here.

The electrified option arrives as the Focus undergoes a subtle update with the aim of keeping it fresh until a more substantial facelift arrives, most likely towards the back end of next year. There’s a new entry-level Zetec option joining the range for the first time since the fourth-generation car was introduced in 2018, the stop/start function has been recalibrated to cut the engine while coasting in gear, and the analogue rev counter and speedometer have made way for a new 12.3in digital gauge cluster on certain trims (with hybrid-specific displays, in this case).

Refreshingly, though, the Focus’s cabin retains a decent balance between physical and touch-based controls, while its Volkswagen Golf and Mazda 3 rivals plump for the more minimalist approach. On lower trims - as is the case with the Puma - this can make for a faintly utilitarian and uninspiring environment, but here in this Vignale car - bedecked throughout with leather-style Sensico upholstery and high-gloss trim inserts - it’s a welcome reminder of the car’s accessible billing. 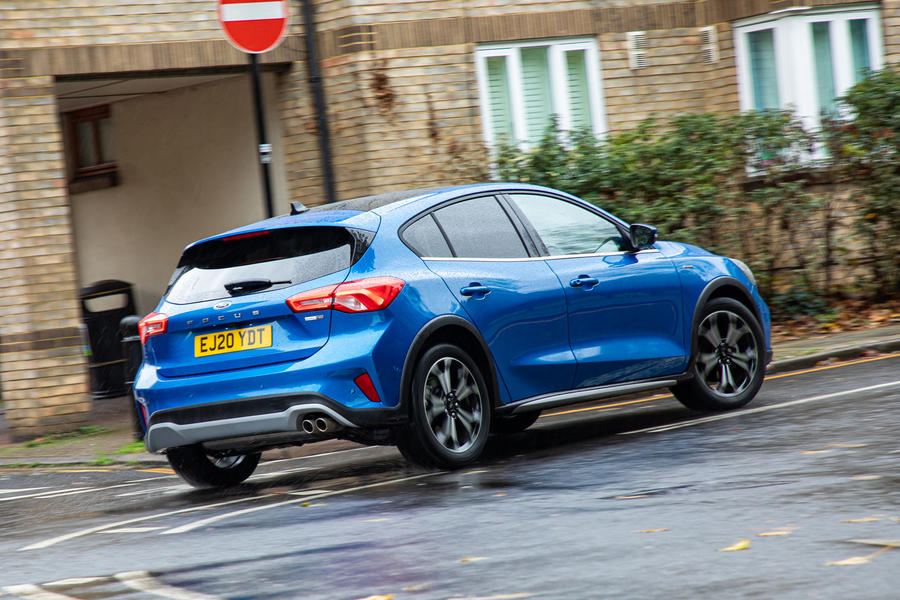 With minimal weight penalty through the adoption of that hybrid system, the Focus also maintains its dynamic edge over all comers in its segment, its steering rack quick to react and nicely weighted in the name of engagement. The suspension, too, even with the Active’s 30mm height advantage over the standard car, is agreeably pliant without giving way to excessive amounts of lean or bouncing slowly over ondulations. The broth is nearly spoiled by the Vignale’s 18in alloys, however - we won’t go so far as to call it "crashiness", but primary ride quality takes a knock courtesy of the slimmer rubber, and there’s a pervasive, though not overbearing, rumble at speed.

The fizzy little Ecoboost engine has not been dulled by the onset of electrification, either - for better or worse. It’s still eager to respond to even slight throttle inputs, and while not as punchy as the Fiesta ST’s 1.5-litre triple, this 153bhp unit has enough puff to pull the heavier Focus around without too much aggro. The tangible accelerative assistance provided by the electrical system helps in this regard, filling in for the turbo at low revs and going some way to compensating for the smaller engine’s power deficit over the keener 1.5.

On the other hand, the ceaseless off-beat thrumming of Ford’s smallest engine can quite quickly grate - especially as it likes to be kept ‘on the boil’ - and the regenerative deceleration is just intrusive enough in stop-start situations to have you reaching for the frustratingly non-existent adjustment switch. Which, on the flip side, is how you know it’s working. Swings and roundabouts.

In reality, of course, any economic benefits are best viewed over the course of several thousand miles, being subtle enough to pass you by on an individual journey basis. We saw 48.0mpg over the course of a 150-mile test route, including motorways, back roads and city streets, which isn’t far off the official 51.0mpg average, but not all that different from what the outgoing engine might have achieved in the same circumstances.

Talk of saving money, however, seems almost immaterial in light of the decadently equipped Vignale car. It’s no top-of-the-line Cullinan, for sure, but the luxuries that come as part of the package - among them a Bang & Olufsen sound system, flip-out door edge protectors and a load-through ski hatch - will be coveted by some but largely unnecessary to most. Actually, in some cases (take the wheels and obstructive head-up display, for example), they’re actively inhibitive. If you genuinely need to load this much kit onto your car, it might be worth stepping up a segment. 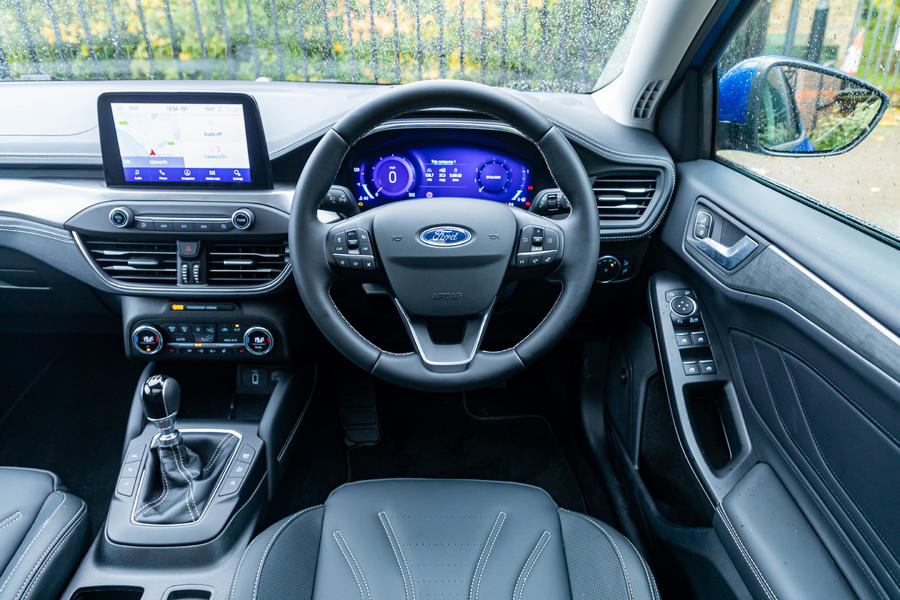 You can still spec up a Focus in Zetec trim with the 123bhp, non-hybridised 1.0-litre engine, but when the cheaper-to-run electrified unit is available on Titanium trim upwards from around £1000 more, we’re not sure why you would. A few months of heavy use could see you claw your extra outlay back quite quickly.

The introduction of mild-hybrid technology, as a means of safeguarding one of our favourite motors, is welcome indeed, and the potential savings make it a no-brainer. But the Focus is not, and never has been, a luxury car – a lower-specification and lower-riding Titanium or ST-Line car will do the job just as well, while enhancing the savings made over the old 1.5-litre engine. 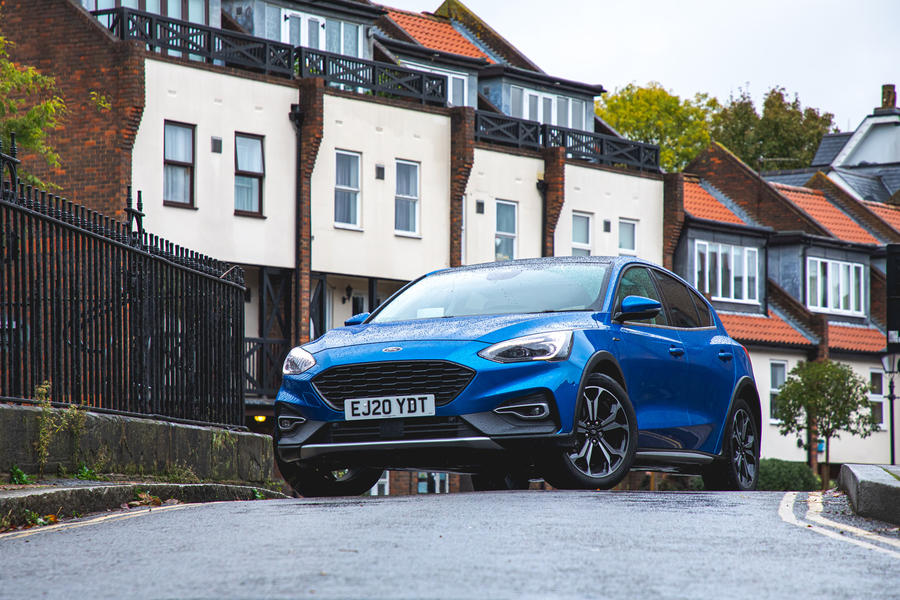 Once again all the armchair experts and keyboard warriors getting in a right state over list prices. It's not 1975 anymore nobody NOBODY will pay anything remotely near £30k for this or any other Focus. It will be discounted to within an inch of its life and then purchased via a PCP or lease making list price even more meaningless.

What a mess, not one thing nor another. At least the hatchback is honest, and if you want a big lumbering SUV why not buy one. Vignale spec seems pointless, a depreceiation trap. Some of the extra kit actually seems unecessary they have probably run out of ideas for extra items and come up with pop out door protectors. Dangerously close to Talbot Matra Rancho territory in it's relevance.

It will not appear on many peoples list, but the fact is, some will buy it, its very easy to spec up many small cars to this price or greater.. A similar spec Golf 8 would be over £32k, without leather..

Back to VW bashing

It will not appear on many peoples list, but the fact is, some will buy it, its very easy to spec up many small cars to this price or greater.. A similar spec Golf 8 would be over £32k, without leather..