BACK TO ALL NEWS
Currently reading: 2021 Volkswagen ID 6: electric SUV seen in production form
UP NEXT
Hyundai i20 N targets Fiesta ST with 201bhp

Volkswagen will imminently unveil its new ID 4 electric SUV, and we've already seen the ID flagship that will follow it, in the form of a prototype testing almost undisguised.

The concept had more space inside than the Touareg, Volkswagen's largest European model. Sales and marketing boss Jürgen Stackmann said at its unveiling: "Key markets for this car are China and North America. These two countries love space."

"I wouldn't reckon that the ID Roomzz will be a core model [for Europe]," he added, but it's nonetheless due to go on sale here next year alongside the ID 3 hatchback, ID 4 crossover and ID 5 estate.

The ID 6 will be the largest model to sit atop the Volkswagen Group's MEB EV platform until the production version of the ID Buzz van arrives in 2022. It can be expected to pack around 302bhp and 331lb ft from a dual-motor powertrain offering part-time four-wheel drive in its standard form. 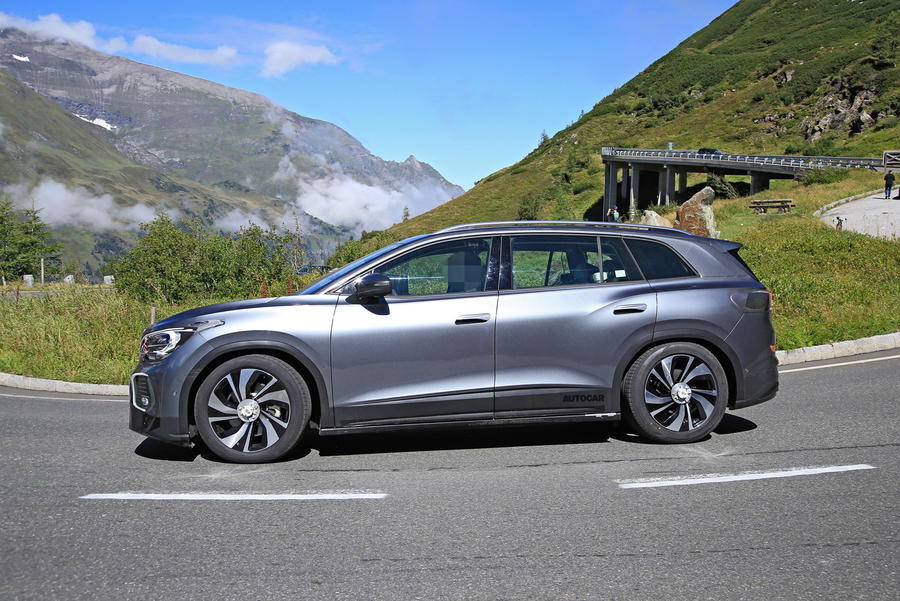 The ID Roomzz concept has a claimed range of 280 miles per charge and can be charged to 80% in around half an hour from a 150kW rapid-charger.

The prototype in these new images appears largely production-ready. Despite Volkswagen’s attempt to mask its origins with Peugeot-esque front grille and rear light decals, we can see clearly that the ID flagship will bear a strong resemblance to the smaller ID 4.

The concept's sliding doors don't look to have made it through to the production car, given the prototype's conventionally placed handles, and nor do the camera-based virtual wing mirrors. It's possible, though, that the latter could be available on high-end variants, given that Volkswagen sibling brand Audi already offers them on its E-tron.

The ID Roomzz concept placed an emphasis on self-driving capability, with a retractable steering wheel and a pair of roof-mounted lidar units. The ID 6 is unlikely to be so equipped from launch, but Volkswagen is aiming to roll out Level 4 autonomous functions to all future ID models.

Another cliche ridden VW design. That rear wheelarch bulge looks as forced and repulsive here as in the otherwise handsome Bentley Flying Spur.

It's quite funny how VW have

It's quite funny how VW have tried to make it look like a Peugeot 5008!

Another week, yet another ID

Another week, yet another ID news story. Whilst still they don't have any ID models delivered to customers

Clearly designed for the US market.....

I'm assuming that this model

I'm assuming that this model has a pretty high kerbweight - it certainly looks like it does.

What an ugly looking beast. VW obviously have made it look like that so that we conitnue to buy ICE's.