BACK TO ALL NEWS
Currently reading: 2021 BMW X3 and X4 facelift includes torque boost for M Competition models
UP NEXT
MST Mk1: Is this the ultimate rally recreation?

The range-topping 2019 M Competition versions of the BMW X3 and X4 have gained a revised powertrain that offers extra torque as part of the mid-life facelift of the wider model range for the two SUVs.

BMW has made a series of changes to New the wider X3 and X4 range, with design tweaks to both models that include a revamped larger kidney grille and new-look headlights. The facelifted version of both models will go on sale in the UK in September, with pricing starting at £43,370 for the X3 SUV and £49,010 for the more sweeping X4 coupe-SUV. Meanwhile, every engine in the standard X4 and X4 line-up is now electrified.

For the range-topping M Competition versoins, BMW has made tweaks to the in-line six-cylinder 3.0-litre twin-turbo petrol engine used by the Porsche Macan Turbo rivals, which were first launched in 2019. Although peak power remains at 503bhp, the addition of the lightweight crankshaft used for the M3 and M4 models and a revamped cylinder head core has allowed BMW to increase the torque by 37lb ft to 479lb ft, on tap from 2750rpm to 5500rpm.

The X3 and X4 M Competition both retain an eight-speed torque-converter automatic gearbox, along with a rear-biased all-wheel drive system. 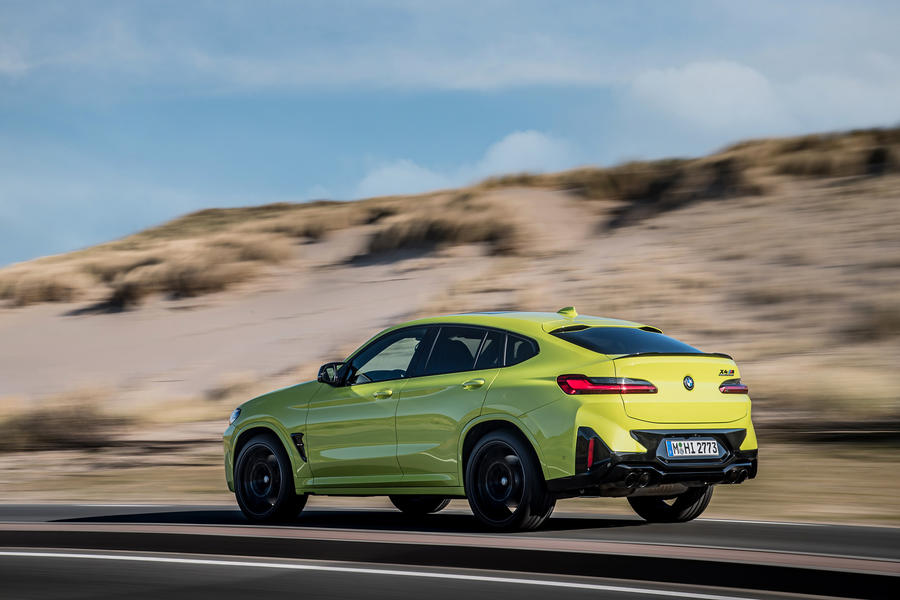 Adaptive M Sport suspension is standards on both models, with electronically controlled dampers used increase ride comfort by reducing wheel and body movements. That combines with the M Servotronic steering and Dynamic Stability Control (DSC), and BMW has added an M Dynamics Mode that allows for extra wheel slip to enable on-track drifting.

Has many of the dynamic hallmarks of BMW’s best M cars, but lacks a bit of effusive performance charm and SUV-typical dynamic versatility

The M Competition models take styling cues from the updated versions of the standard X4 and X4 (see below), with the addition of M-specific styling elements. They use a one-piece frame version of the enlarged kidney grille, which features the frame finished in gloss black. It also features a built-in black bar that houses the front-facing camera. Adaptive LED headlights are standard, with BMW’s laser light system optional.

BMW has also added new bespoke M Competition side air intakes, which are framed with high-gloss black elements, and a revamped rear spoiler. That is part of a revised rear apron, which features a new design shaped like a ‘large anvil’ and twin black chrome exhaust pipes.

Inside, the sporting variants feature sports seats and the ‘control island’ used in the M3 and M4, along with BMW Live Cockpit Professional, which is based around two 12.3in digital displays. A Harman Kardon surround-sound system is also standard.

For the first time on the X3 and X4 M Competition models, BMW's Driving Assistant Professional system will be offered as an option, which included features such as Active Cruise Control and parking assist.

BMW has made design tweaks to the standard versions of the X4 and X4 models that include a revamped larger kidney grille and new-look headlights. 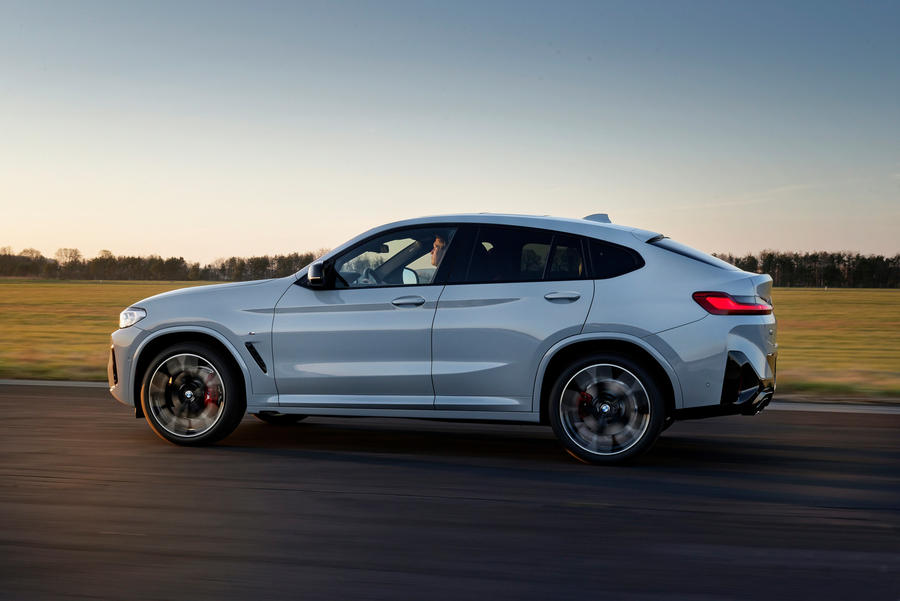 The tweaks are designed to give the third-generation X3 a more 'robust' SUV appearance. The kidney grill has been increased in size, with a new black bar to give it more visual separation. The headlights are flatter, with full LED as standard and BMW's Laser Light system available as an option.

The X3 gains a new front April, raised underbody protection and window graphics and roof rails finished in aluminium. The rear styling has been reworked with larger exhaust pipes and narrower rear lights.

The styling of the X4, which is 43mm longer than the X3 and sits 55mm lower, has been reworked to emphasise its more ‘sporty’ coupe-esque styling. That includes the revised grille, and a revamped rear engine design.

Both models will be offered in M Sport trim, which adds a mesh kidney grille with black gloss surrounds, along with extra gloss exterior trim and M Performance aerodynamic styling.

In the UK, 19in wheels will be standard, with the M Competition versions sitting on 21in alloys.

The interior styling has been revamped with a new centre console taken from the latest 4 Series, with a central display built around a 12.3in touchscreen. Enhanced sports seats are available, and M Sport models feature leather upholstery as standard.

The petrol and diesel line-up for both models has been revamped, with 48V mild-hybrid or plug-in hybrid on all powertrains.

The X3 will be offered with the petrol-engined 177bhp xDrive20i and the 249bhp xDrive30e plug-in hybrid, which can complete up to 31 miles of electric-only running. 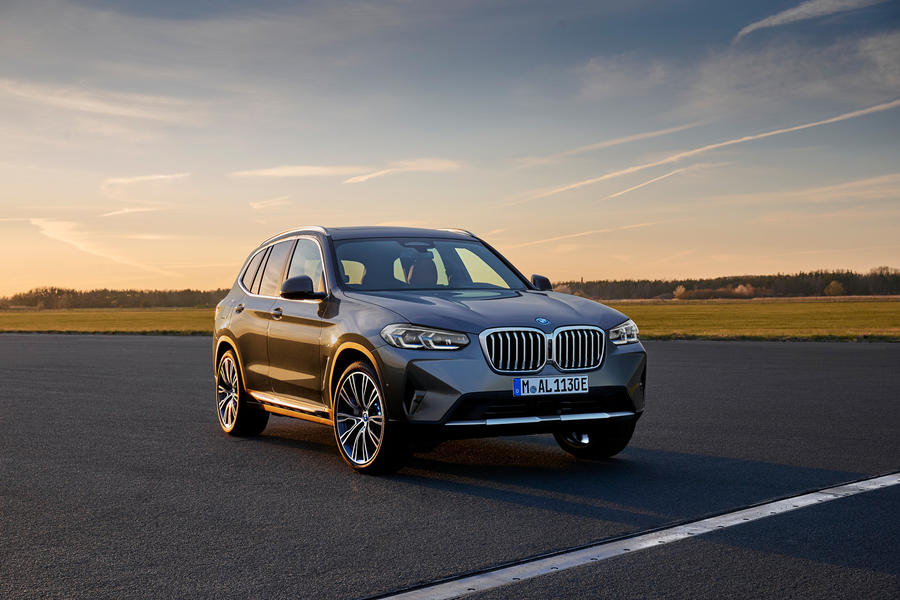 As standard the X3 and X4 use BMW's all-wheel-drive technology, which is rear-drive optimised in an effort to offer typical BMW handling.

Every powertrain uses an eight-speed automatic gearbox, with the M40i, M40d and all X4 models gaining a sport version that offers paddle shifts and launch control.

Driving the X3 is the best car experience ive done in my life. Super important is the petrol-engined 177bhp :o

Agree about the styling updates - unfortunately BMW seem to have a policy of making every new car considerably uglier and less easy to use than the car it replaces. Take the central console controls for instance - the previous model's were so much clearer and intuitive than these. And don't let me get started on that hideous digital dash. Utterly bizarre.

Funny that they don't use the slogan "The Ultimate Driving Machine" anymore, isn't it!

You'd have to be seriously lacking in the head department to want to buy an 'M' version of one of these. An M40i or M40d maybe, but not an X3M or X4M.

On to the LCI - did the central dash need upgrading....? Not really. Did the gear selector? Yes it did, and the new one looks good. But there's one area that wasn't addressed - the sports seats on the M-Sports versions. I've never sat in such uncomfortable car seats in my life as I did on a test drive of a 20 plate 30d. They really needed looking at.

As for the outside.....no ta. I think the X3 needs a complete modernisation project to bring the exterior design up to date.