Renault has released pricing and technical spec details of its facelifted Mégane range, which includes an updated RS model and the first ever plug-in hybrid variant.

Priced from £18,995, the Ford Focus rival's standard range has been slimmed down to just three trims: Play, Iconic and sportier RS-Line. Standard kit on the entry-level car includes 16in alloy wheels, smartphone compatability, a digital speedometer and full LED daytime-running lights, while mid-range Iconic cars gain front and rear parking sensors, a 7.0in touchscreen sat-nav and driver aids including lane departure warning and traffic sign recognition. RS-Line brings the larger 9.3in touchscreen alongside a host of design upgrades.

The most significant new range addition is the E-Tech plug-in hybrid, which is available from £30,685 on Iconic trim. It follows on from hybrid versions of the Clio and Captur crossover that use the same system: a 1.6-litre petrol engine mated to two electric motors and a new, multi-mode clutchless transmission, which Renault claims offers "excellent efficiency and barely noticeable gearchanges". 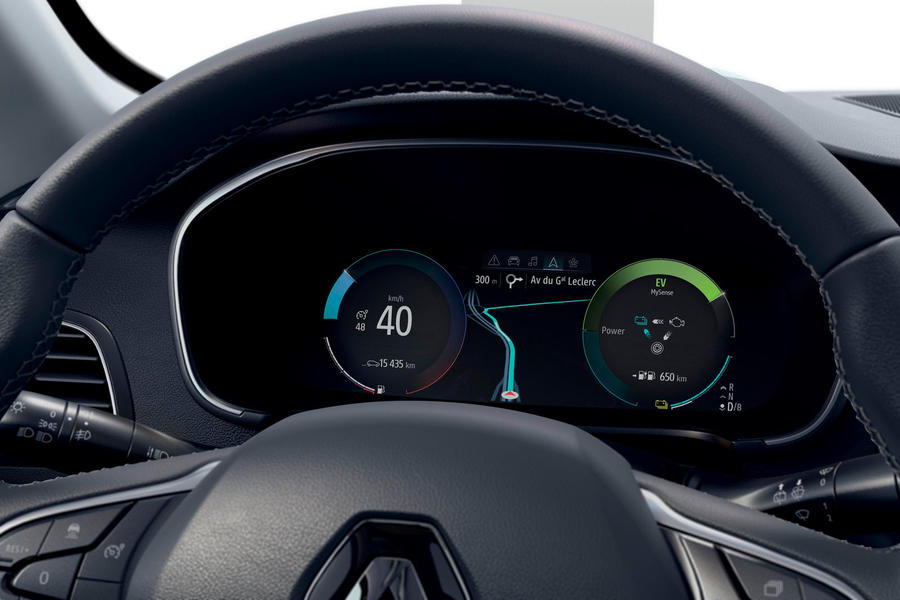 Making 158bhp, the system features a 9.8kWh, 400V battery that allows a range of 30 miles, and the ability to travel at up to 84mph on electric power alone. It can dispatch 0-62mph in 9.8sec, with Renault claiming up to 217.3mpg and a CO2 figure of 30g/km. Customer deliveries for the PHEV begin in November.

Further revisions across the range include the addition of Renault’s latest Easy Link infotainment system, first seen in the latest Renault Clio, brought in alongside a new 10.2in digital instrument panel. A new level-two autonomous 'Motorway and Traffic Assistant' system is brought in, while new ‘Pure Vision’ LED headlights are offered.

The new RS-Line trim variant replaces GT-Line, while the entry-level RS 280 hot hatch has been dropped. As such, every RS model will be powered by a 296bhp engine and receive a 22lb ft torque boost when mated with the automatic gearbox option. The equipment tally for the RS has also increased, while a Trophy model and the Cup chassis option are still available.

The updated Mégane range will go on sale next month, with deliveries expected before the end of the year.

30 quid for a sub average Megane!

Almost 31K for a Megane which can do 60 in 10 seconds is  downright absurd. I imagine it being a major flop unless they discound the price by at least 5K

Base version will look interesting inside, no centre screen, that's to base for my liking.  Never thought I'd see a 160ps hatch back scrap the 0-60 time in at just under 10 seconds, progress emmm. Tax dodgers only please.

Oh and 217mpg, that beats the LEAF can someone explain please

I'll comment here as there is no comment section on Bentley article.  What a master stoke. And dare I say, a bargin!  Good job Bentley, already waiting for the plummet! LOL