BACK TO ALL NEWS
Currently reading: 2020 Honda Civic Type R: UK prices confirmed for updated hot hatch
UP NEXT
Worth the weight? Lotus Emira first ride

For a mid-cycle update, Honda has introduced two new variants: the low-volume, lighter track special Limited Edition car, and the Sport Line, which sits alongside the existing mid-tier GT, for a total of four variants. Prices for the Sport Line and GT models both start from £34,820.

Available to order in the summer alongside the standard 2020 Type R, the Sport Line is designed to offer “more discreet styling and a more refined ride” for those who found the existing model too lairy. The most significant external alteration is the removal of the big rear wing in favour of a lower, more subtle item, but there’s also an exclusive design of 19in alloys wrapped in softer-sidewall Michelin Pilot Sport 4S tyres. 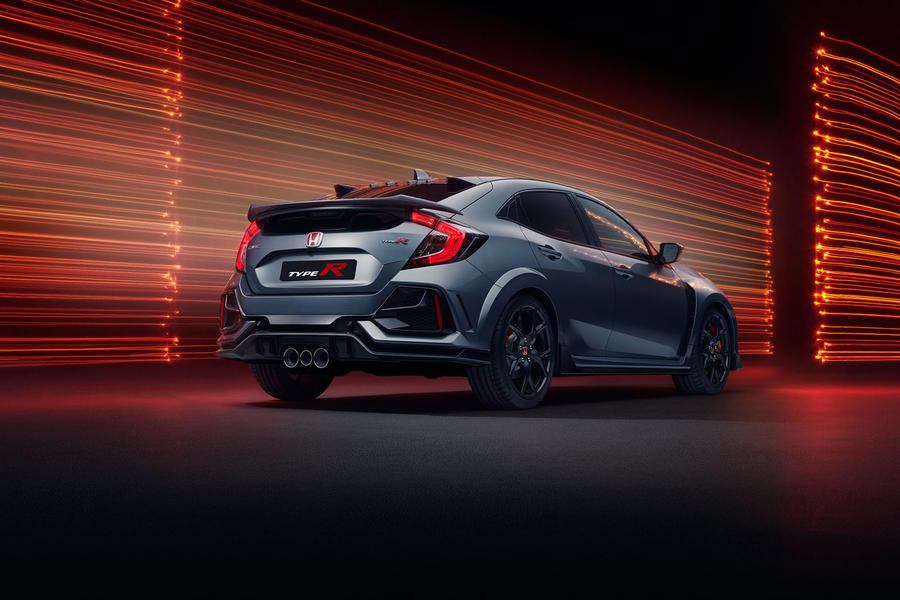 The interior also dials down the visual drama courtesy of black seat upholstery with red stitching. The changes aren't all aesthetic, though; along with the new tyres, additional soundproofing has been added in the boot and tailgate to reduce noise, vibration and harshness (NVH) levels.

At the other end of the range is the Civic Type R Limited Edition. Europe will receive just 100 examples, with a UK allocation of 20, all of which have already found buyers. Honda claims the Limited Edition has been “designed and engineered to be the most dynamic front-wheel-drive hatchback available” and is the most extreme Civic Type R yet.

Key to the Limited Edition’s appeal is a weight-saving regime, with Honda stripping out the air conditioning, infotainment touchscreen and some of the sound deadening to save 47kg. But unlike the Renault Mégane RS Trophy R, it retains its rear seats. 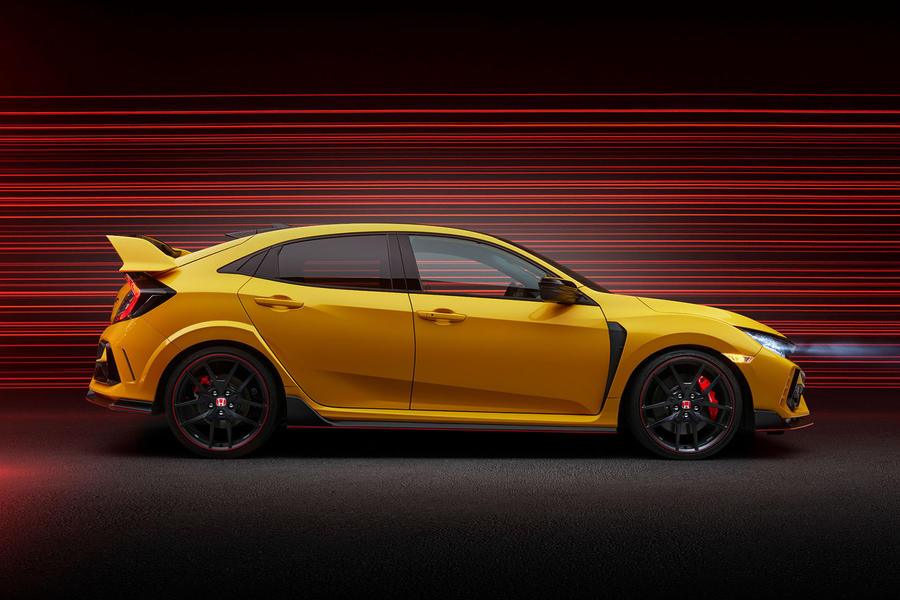 Further additions include lightweight, forged BBS 20in alloys shod in sticky Michelin Pilot Cup 2 tyres. Honda claims it has modified the dampers and recalibrated the steering to suit the new wheel and tyre combo and improve feedback. Exclusive Sunlight Yellow paint with a contrasting gloss black roof, door mirrors and intake vents aim to increase the Limited Edition’s visual clout, while each model gets a build plaque on the dash.

The two range additions complement the updated Type R, which was first revealed in January. Visual changes are minor and include reprofiled bumpers and lights, but again the focus is on engineering improvements; for example, a larger air intake opening combines with a new radiator core to decrease coolant temperature by up to 10deg in high-demand situations, Honda claims.

Similar thermal improvements have been achieved with a new braking system, bringing two-piece floating front discs that reduce unsprung weight by 2.5kg. Their increased thermal efficiency reduces brake fade, while there’s also 15mm less pedal travel. Uprated suspension bushings and ball joints are also claimed to sharpen the handling further, while the parameters of the adaptive dampers have been widened.

Interior additions, alongside a revised infotainment system with physical shortcut buttons, include an Alcantara steering wheel and a new teardrop-shaped gearknob. The knob itself includes a 90g counterweight that's said to improve shift accuracy. 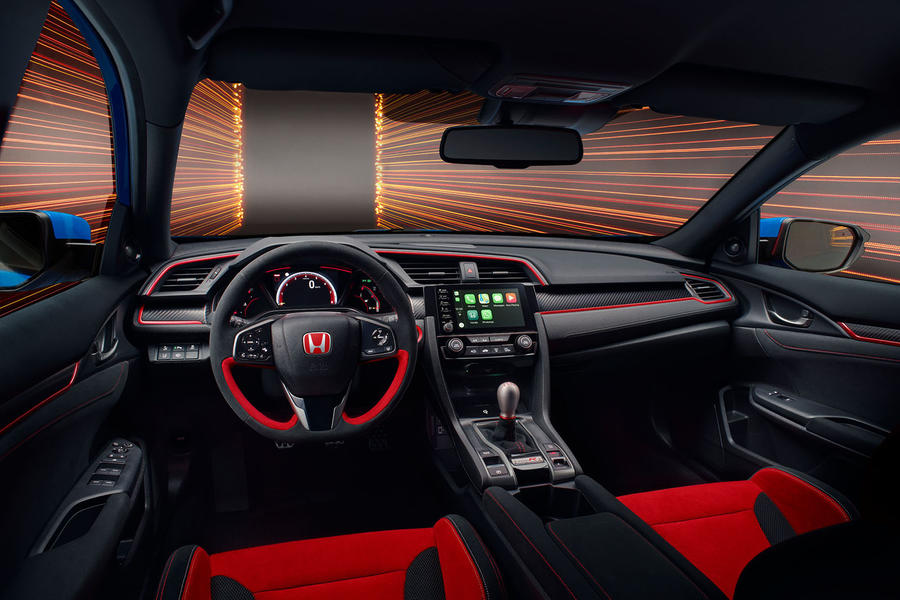 What were your priorities when updating the Civic Type R?

"Usually at minor model change time the updates are just cosmetic. But once I was involved in Civic Type R development, I wanted to have a step forward in improving performance. If you stop developing and improving, the sports car will die. Also, since the Type R is a global model, we had to improve variation; some like it more extreme, some like it more understated. We want a maximum range of customers to enjoy the performance."

Is the Sport Line model’s handling affected by the smaller wing?

"We are not talking about real racing cars where you have tonnes of downforce and drag; if you compare the top speed of both cars (standard and Sport Line), they are more or less on the same level. The rear wing is not really that big of an influence; the Type R’s high-speed stability comes from the base platform layout and suspension specification. The functionality has been maintained for both wing designs."

Will you take the Limited Edition back to the Nürburgring to see how much faster it is?

"The Nürburging lap time is one of our development criteria to be able to verify the actual result as an overall vehicle performance. This is something we are going to perform, regardless of whether it’s a record or not; it’s not our motivation." 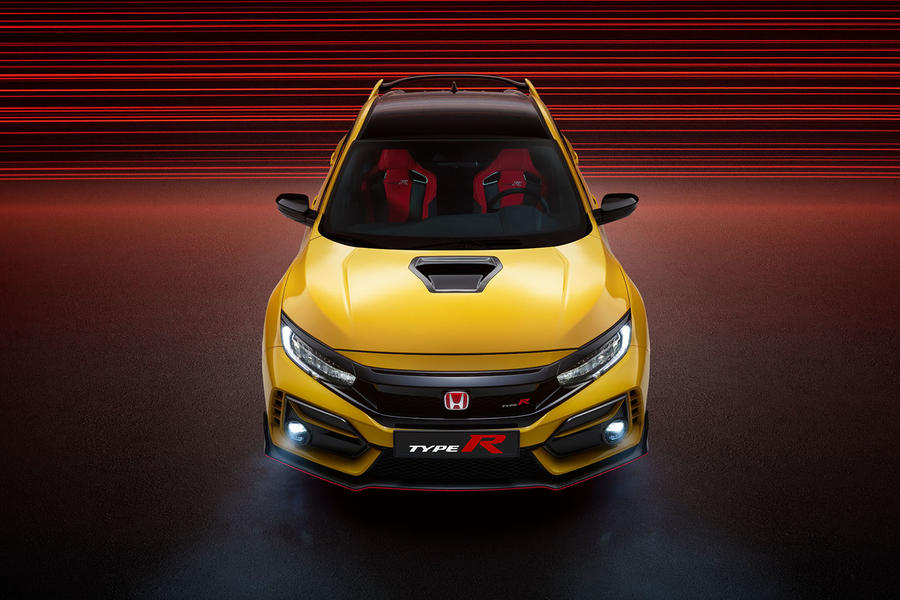 Could we see the Civic Type R go hybrid, and does the Type R brand have a place in electric cars?

"There are no restrictions on the technology to apply to the Type R, if it can provide the excitement and the dynamic performance and all the core fundamentals worth calling it a Type R. If that can be realised with either an electric motor or hybrid, that’s fine. But we must not forget the initial idea and the fundamental concept of the Type R, which is a sports car with extremely high performance and an affordable price. There are no restrictions if that can be realised."

Have you reached the limit of what you can achieve with front-wheel drive?

"We do not believe we have reached the limit. I believe there is still performance to achieve with front-wheel drive. All-wheel drive is not really matching to Honda’s development principle: “Man maximum, machine minimum”. We do not want to increase the engine power, the weight of the car by applying all-wheel drive to make it heavier. Our idea is always to maximise the freedom of the driver."

Is the Type R badge specific to Civic now, or will you use it on other models?

"It can still be applied to other models as well. It doesn’t have to be limited to Civic."

2021 is approaching quickly - hopefully everyone there finds other employment quickly despite the added challenges of Coronavirus.

I still prefer the Focus ST, which is available as an estate, throw on a £600 Mountune 330 kit, and its all the car you really need, and there is room for the dog.. Oh and you dont look like you have crashed through Halfords..