BACK TO ALL NEWS
Currently reading: 2019 Mercedes-AMG CLA 35 arrives at New York with 302bhp
UP NEXT
Industry analysis: HR Owen backs the luxury car market

Mercedes-AMG has extended its range of four-cylinder performance models with the introduction of the CLA 35 4Matic four-door coupé.

The recently revealed CLA is the third of Mercedes-Benz's latest generation of compact models to receive the AMG treatment, following the A35 4Matic hatchback and the recently announced A35 4Matic Saloon.

Pricing has yet to be announced, though the CLA 35 is planned to be positioned beneath the six-cylinder C43 and has been conceived to compete against the 2020 BMW M230i Gran Coupé and the Audi S3 Saloon. UK deliveries are expected to get underway in August.

Despite being close in conception to the four-door A35 Saloon, AMG is banking on the more expressive design of the CLA 35 to find favour among particular customers. 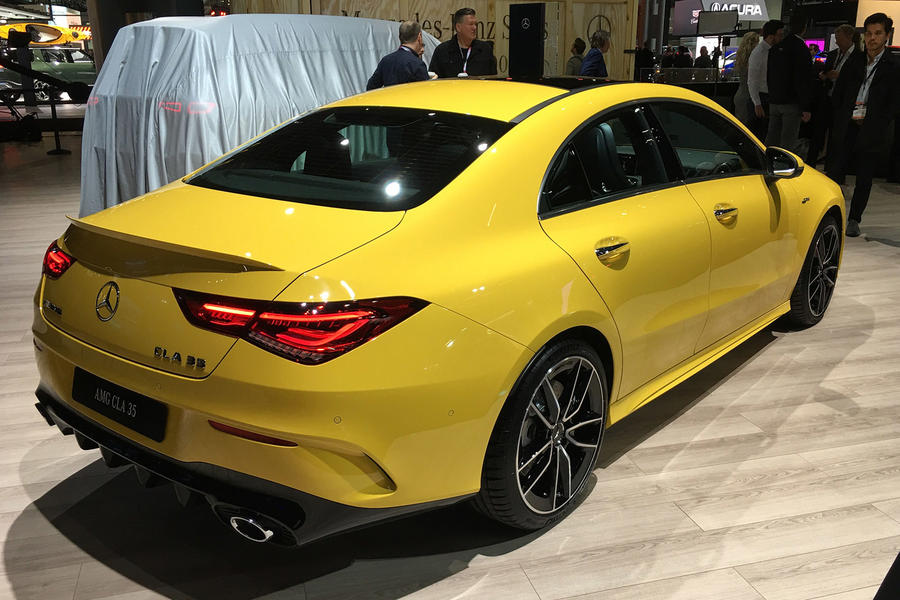 The new AMG model receives the same transversely mounted turbocharged 2.0-litre four-cylinder as the A35 variants. Based around the M254-designated unit used by the CLA 250, it produces 302bhp at 5800rpm and 295lb ft of torque at 3000rpm.

Drive is sent to all four wheels through a seven-speed dual-clutch automatic gearbox and multi-plate-clutch four-wheel drive system - a combination Mercedes-AMG says can vary the drive split from 100% to the front wheels to 50:50 front and rear depending on prevailing traction.

The German car maker quotes an official 0-62mph time of 4.9sec, or 0.1sec slower than the A35 4Matic Saloon, as well as an electronically limited top speed of 155mph. By comparison, the Audi S3 Saloon runs a turbocharged 2.0-litre four-cylinder petrol engine with 306bhp and 280lb ft. It's claimed to accelerate from 0-62mph in 5.2sec and reach the same 155mph top speed.

Combined fuel consumption and average CO2 emissions for the CLA 35 are put at 39.2mpg and 164g/km respectively - slightly better than the A35 hatchback. 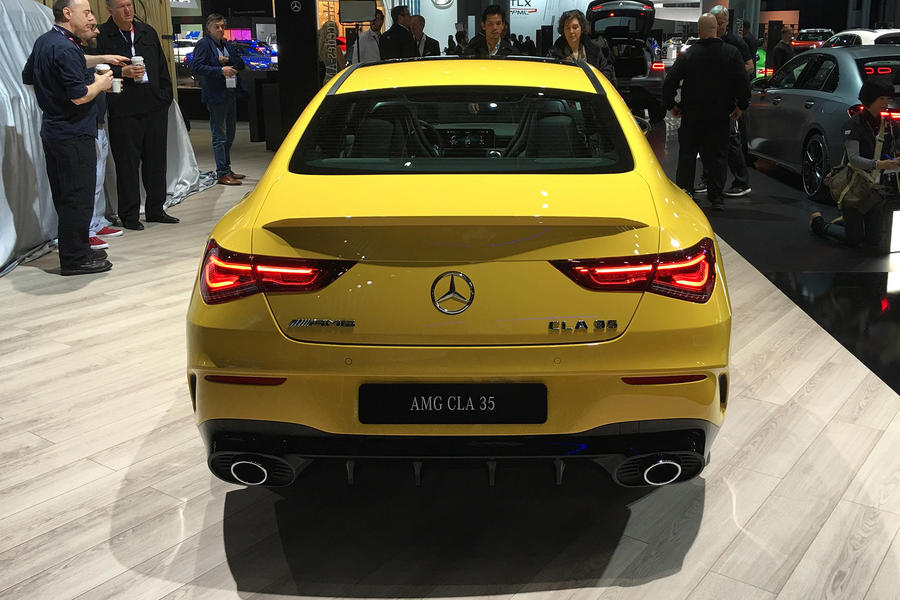 Underpinning the CLA 35 4Matic is a retuned version of the CLA 250’s MacPherson strut (front) and multi-link (rear) suspension, which can be optioned with adaptive dampers offering three levels of stiffness. It also uses a variable-ratio steering system and features a strengthened body shell with an additional aluminium member incorporated beneath the engine to increase torsional rigidity.

Mirroring the visual changes already incorporated on the A35 Saloon, the CLA 35 receives a heavily restyled front bumper featuring a front splitter element, larger air ducts and a revised grille. Further back, there are AMG door mirrors and more prominent sills beneath the doors. At the rear, it adopts a similarly sporting treatment with a new rear bumper with a multi-channel diffuser and twin chromed tailpipes as well as a small lip spoiler atop its short boot lid. The car gets 18in alloy wheels as standard, and 19in rims will be available as an option.

Inside, AMG’s latest model comes equipped with Mercedes-Benz’s MBUX operating system, which works in combination with standard digital instruments and an infotainment display within a common panel atop the dashboard. The instruments can be customised with different modes, including a so-called Supersport mode that introduces AMG-specific data. Further upgrades over the CLA 250 include front sport seats and AMG-specific trim applications.

As with the original CLA, AMG plans an even more potent version of its new style led four-door compact model in the form of a new 400-bhp plus CLA 45 4Matic. This is planned for launch in early 2020.

Mercedes-AMG set to give all future models plug-in option

The days of owning any of the German marques being seen as 'exclusive' or 'doing well' are long gone, affordable lease deals and good residuals mean it is more affordable to get behind the wheel of an MB than an Alfa!

I sat in the new A class hatchback in the MB dealer recently, I believe at was an AMG line model, I was impressed with the interior quality, ambiance and space, I prefer it over the C class.

Their efforts in recent years to shake of the 'old boys car' image is really working.

I am a bit bored with the three German marques just knocking out cars to fill segments, but they are volume sellers now, just like VW, Ford, GM, PSA etc. so it is all about the numbers, even Porsche is going the same way..

Is it just me or?

you get sick to death of the alarming regularity of new metal from MB. Ownership must become something of a liability these days. I am really lost with the number of models MB and AMG - which takes away their exclusivity and pride to become like ......everybody has one !! And as mentioned by others, not especially nice A Holes either. BORING.

Another forgettable model from Mercedes. They seem to have lost all their class in recent years. They're all rather tacky & focused towards the show-off school run brigade. All a bit chavvy. This car already looks dated.
View all comments (8)