BACK TO ALL NEWS
Currently reading: New Mercedes CLA to be sportiest compact yet in range
UP NEXT
New 2022 BMW 3 Series brings redesign and tech upgrades

New Mercedes CLA to be sportiest compact yet in range

Bigger, tech-packed second-generation coupé will put dynamics to the fore and get a 404bhp flagship
Open gallery
Close

Mercedes-Benz has promised that the second-generation CLA coupé, revealed at the Consumer Electronic Show (CES) in Las Vegas, will offer the sportiest driving dynamics of its new wave of compact cars.

The new four-door coupé is due to arrive in the UK in June. It is built on a re-engineered version of the previous car’s platform and uses technology from the latest A-Class. 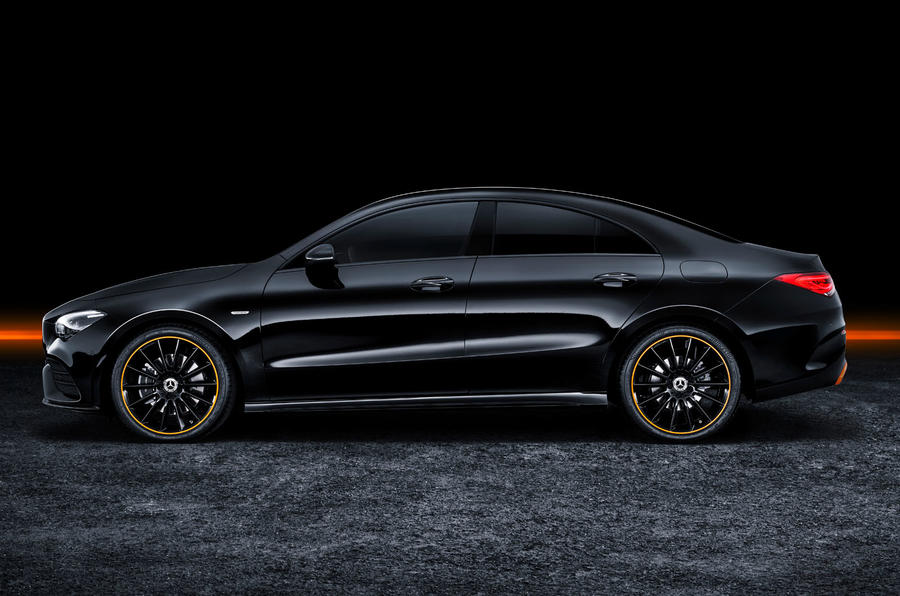 Available with front- and four-wheel drive and the choice of two rear suspension systems, the new machine was displayed at CES in CLA250 guise, featuring a 221bhp four-cylinder 2.0-litre petrol engine, driven through a seven-speed automatic gearbox. The rest of the engine range is likely to mirror the A-Class, with 131bhp and 161bhp 1.3-litre petrols, a 187bhp version of the 2.0 petrol, a 114bhp 1.5 and 148bhp and 187bhp 2.0 diesels.

A decoupled multi-link rear axle will be offered, with active adaptive damping available as an option. Wheel sizes will range from 16in to 19in. 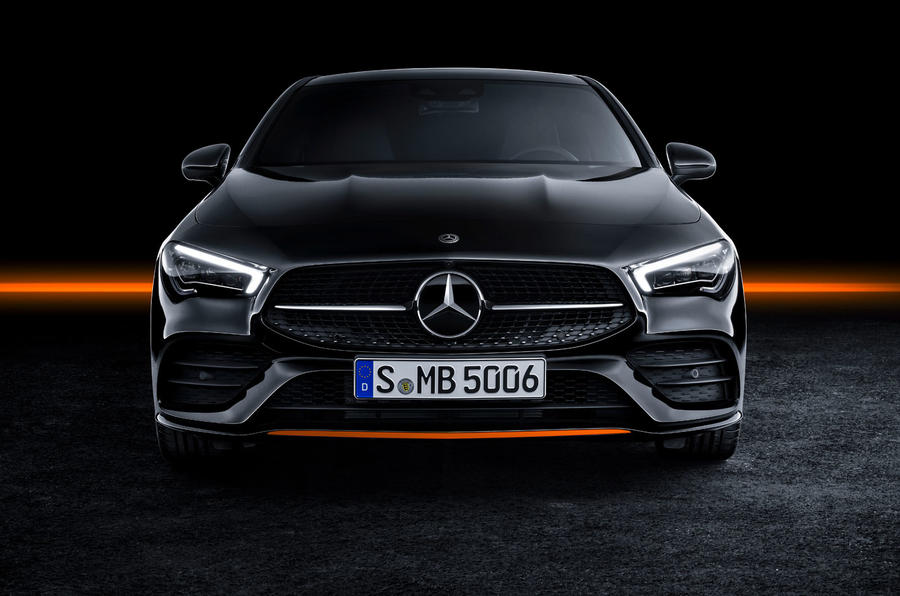 At 4688mm long and 1830mm wide, the new CLA is 48mm longer and 53mm wider than its predecessor, and its 2729mm wheelbase has been extended by 30mm. Mercedes said this, along with the car’s lower centre of gravity, helps to ensure it has improved driving dynamics. The new CLA has also been honed in the wind tunnel to have a drag coefficient of 0.23, very close to the previous car’s 0.22 Cd despite a larger frontal area.

In its design, the new CLA has echoes of the A-Class and other recent new Mercedes, but with an elongated bonnet featuring a sharply raked nose, uniquely designed flat headlights and a prominent ‘powerdome’ on the bonnet. The sloping coupé roofline is emphasised by frameless doors. The rear of the car features narrow tail-lights designed to make the vehicle appear even wider. 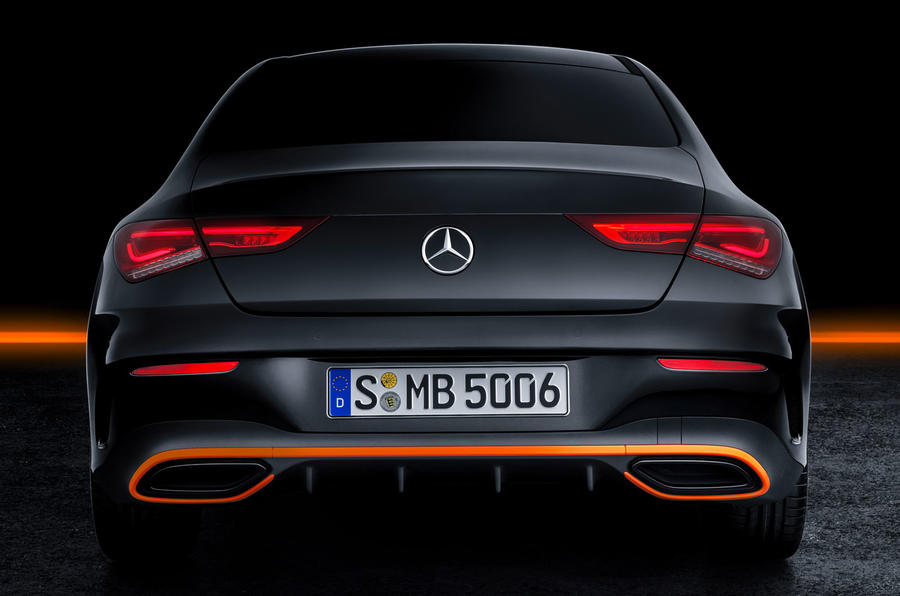 The car’s larger dimensions have resulted in a more spacious interior, with 17mm of extra head room, although leg room remains broadly similar to the previous model’s and the boot has shrunk by 10 litres to 460 litres.

The CLA has the youngest average customers of all Mercedes models, so the firm has focused on a high-tech theme for the interior. The dashboard features a centrally mounted touchscreen and no cowl, with a ‘trench’ splitting out the lower section. It also has the newest version of the Mercedes-Benz User Experience (MBUX) system, including ‘Hey Mercedes’ voice recognition control. 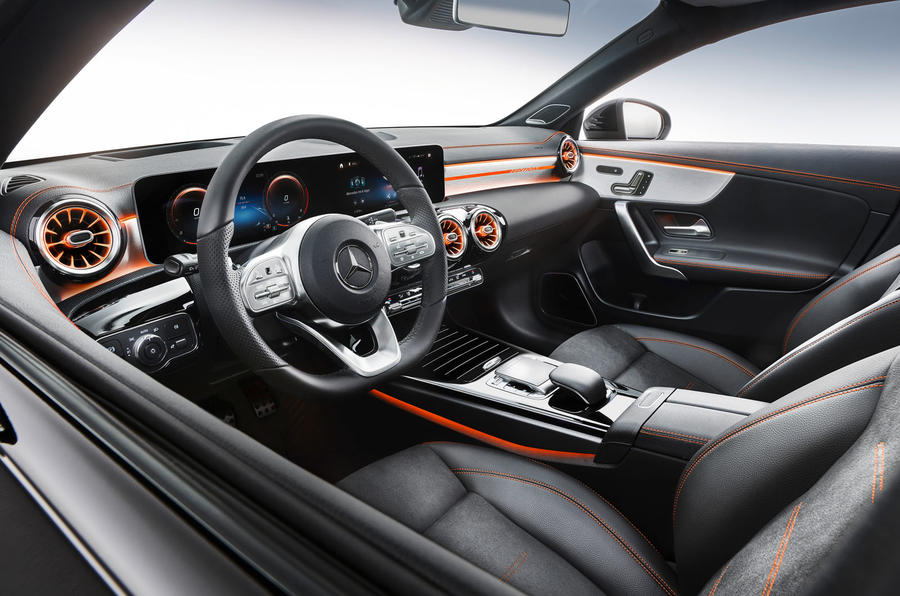 A new interior assist system enables gesture control of certain functions and it is said the car can detect whether the driver or passenger is using the touchscreen and react accordingly. Gesturing towards the rear-view mirror can also control the reading light.

As with the A-Class, the CLA also receives driver assistance systems originally seen on the most recent S-Class, allowing the machine to drive semi-autonomously for the first time. The systems fitted include active brake, lane keeping and lane change assistance systems along with Pre-safe Plus, which can detect an imminent rear-end collision and prepare the car for it. 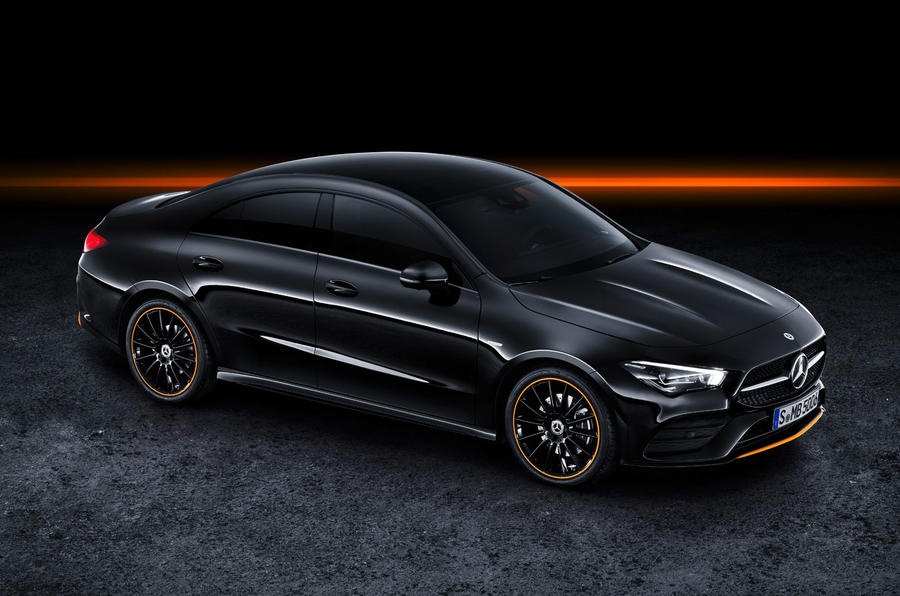 The CLA will be offered at launch as a limited-run Edition 1, featuring a number of visual tweaks. UK trim and specifications have yet to be determined. The car will be manufactured at Mercedes’ Kacskemet plant in Hungary.

A shooting brake estate is due to follow later this year. Mercedes performance arm AMG is also working on a range-topping CLA45 model, featuring the most highly tuned, 415bhp version of the M260 2.0-litre petrol engine. A 302bhp 2.0-litre CLA35 AMG is also planned.

Side profile still looks wrong to me. I'm seeing loads of A class hatches on the road, not surprising given its top ten sales position. 90% of these are billy basic spec which look incredibly 'budget' without any of the Mercedes 'aura' im sure the owners believe theyre projecting.

I find the current Mercedes styling incredibly vulgar and brash, the A class somehow manages to acheive this AND look budget (externally at least, the interior can look incredible for a mundane hatchback).

This new CLA looks so much better looking than the previous model which was ill-proportioned, even ungainly looking. Although Mercedes' saloon styling still looks a bit odd on a FWD layout, this new model genuinely looks good IMO. I wonder if the next C Class will finally spawn a 4dr coupe model though to compete with the 4 Series Gran Coupe, A5 Sportback and Arteon. It seems odd that with almost every class of car and niche occupied by a Mercedes, the large 4dr coupe isn't one of them.

A 4 door car of this shape

A 4 door car of this shape just doesn't look right somehow, like its CLS sibling, it just feels 'forced'. Or just stick to being a proper coupe. The new A Class saloon looks better and no less sportier than this in my opinion.
View all comments (4)