8
With its new entry-level model, AMG hopes to attract a generation of loyal customers. We've driven the A35 in the UK for the first time to see whether it sets the right tone
Open gallery
Close

You might guess as much from the look of it. Despite it sitting closer to the road on wider, 235-section tyres and having a more aggressively open-worked grille, you’d struggle to tell this car apart from the Mercedes-Benz A250 AMG Line upon which it’s based were it not for the optional rear wing.

Walking around to the rear reveals a pair of fat exhaust tips sitting plum within a deep gloss-black valence replete with diffuser, but it’s obvious that AMG is holding plenty of aesthetic clout back for the fire-spitting, 400bhp-plus A45 that's due later this year. Many will appreciate the Q-car appeal of the lesser AMG A-Class.

We’ve driven the A35 before, on forgiving European Tarmac, and you can read Mercedes-AMG Dan Prosser’s dispatch and plenty of engineering detail here, but this is our opportunity to see how it handles British roads. Just over 300bhp and four-wheel drive in a hatchback body – such a popular recipe – sounds quick, and a 4.7sec 0-62mph time duly drops the A35 into serious performance car territory, but the right blend of usability and entertaining dynamics is harder to achieve.

There are only two bona fide rivals for this new Mercedes, and they the hugely successful Volkswagen Golf R and its corporate cousin, the Audi S3. This is an interesting pair, because if the expensive A35 can closely match the dynamic breadth of the former and couple it with the latter’s outright sophistication, it will stand a good chance of topping this versatile corner of the class.

It's an expensive corner, mind, and while the A35's basic price puts it on a par with the S3, you’ll probably want to spend more. This example, in Mountain Grey metallic paint (£595), was fitted with the AMG Style Package (£2595), which gets you 19in alloys, tinted windows and the questionable rear wing. For the full digital showcase within, you’ll need the AMG Premium Plus Package (£3895) and the AMG Advanced Navigation Package (£1295), which adds an excellent head-up display and augmented reality for the sat-nav. All in, the outlay for a well-equipped A35 isn't a million miles away from what you’ll pay for a BMW M2 Competition, which should give serious pause for thought before you even push the engine start button. 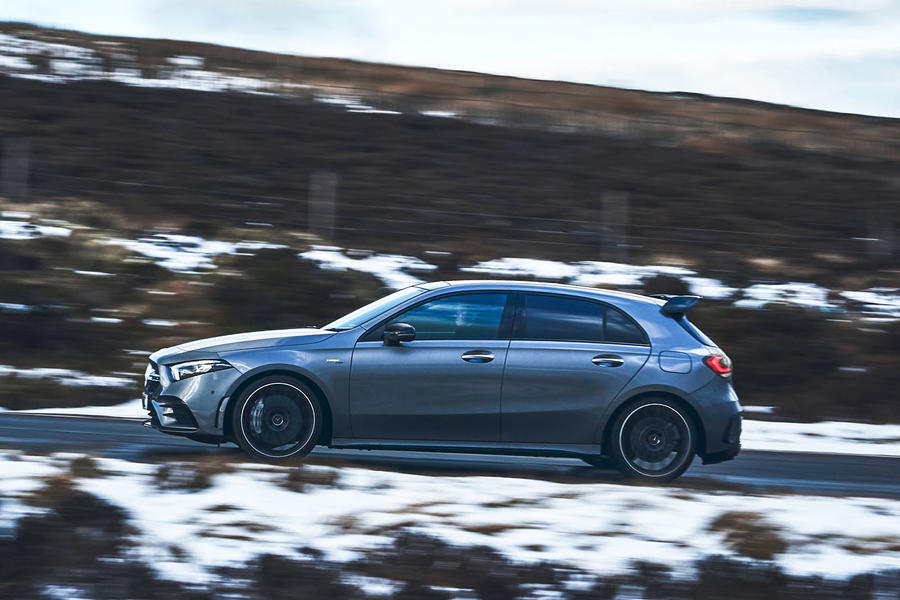 From increased camber angles to bespoke lower front wishbones and wheel carriers and a solidly mounted rear subframe, there's more that mechanically separates the A35 from the best-of-the-rest A250 than meets the eye.

The stiffer shell of the W177-generation A-Class is also bolstered by a pair of A35-specific front strut braces and an under-engine shear panel, which provide further basis for terrifically precise steering response.

And it's precision that defines the driving experience relative to this car's rivals. Roll and pitch movements are very well contained even over the tortuous country roads, and to elicit even a whisp of wheelspin you'll need to overdrive the car in a way that offers little if any satisfaction. Better to instead splice methodically through corners, carrying more speed than expected and wringing as much out of the front axle as possible. The convincingly weighted electromechanical steering helps in this respect, and driven quickly the A35 feels light on its toes.

It can, however, seem as though you're merely joining the dots, albeit with enjoyable accuracy. The chassis balance feels purposely front-biased, and that inevitably limits any real sense of flow. The Honda Civic Type R – purely front-driven – counters this with a mobile rear axle and considerable adjustability, but the A35 doesn't sacrifice stability in this way, and, in fairness, the majority of owners wouldn't want it to.

Even so, only with the ESP in its midway Sport setting (or off entirely) and with considerable commitment does it begin to express itself, and then only shyly. Using the throttle to subtly tweak your trajectory is mostly a fruitless exercise, and yet this chassis won't indulge a brasher driving style. Throw all 295lb ft of torque at it and, with an electromechanical multi-disc clutch pre-emptively directing up to half of that rearwards, you might tease out a slither of oversteer on a wet day, but there's never the indulgent sensation of the rear outside tyre helping thrust the car through corners. Locked-down cross-country pace is what the A35 is designed to do, and it does it well – extremely well, at times. But don't expect the levels of dynamics expression we typically associate with AMG.

As an everyday car there are concerns, too. AMG claims its adaptive dampers have a broad scope, and they may well do, but we haven’t yet sampled them. For all the poise it imparts at speed (though the bump-stops do make themselves known sooner than you might expect), the passive hardware of our test car was restless when only lightly loaded. It’s the traditional trade-off of low-speed compliance for high-speed control, but in a hatchback, even a supersonically fast one, that’s harder to accept than for something in the mould of the M2 Competition, and poorly surfaced motorways can be troublesome.

Paying £695 for the adaptive items and pairing them 18in wheels (our test car rode on 19in) might well solve this particular problem and give this chassis greater breadth, so for now the A35 gets the benefit of the doubt.

Rarely do we get so far into an AMG story without talk of the engine, but that’s because the M260 unit in the A35 isn't actually an AMG ware. When the A45 arrives, it will do so with an updated version of the sensational M133, at one point the most powerful four-cylinder production engine in the world, and the A35 has been stood well back from that.

This A250 engine nevertheless gets a new twin-scroll turbocharger for A35 duties, and throttle response is conspicuously sharp. The sports exhaust may be a little contrived, but it does give a reassuringly brawny blare, and with both peak torque and power arriving later than for rivals, there’s more shape to the delivery. For this application, the M260 performs sweetly enough.

Shorter, AMG-specific ratios for the dual-clutch ’box also provide ample opportunity for redline upshifts, although leaving your pull of the paddle even a moment too late flummoxes the driveline and sends the car’s mass careening forwards.  This gearbox is otherwise slick as you like, and while the engine is neither as clinical as the Golf R’s EA888 nor as animalistic as an authentic AMG unit, it’s likeable and effective. Expect a touring economy in the mid-30mpgs. 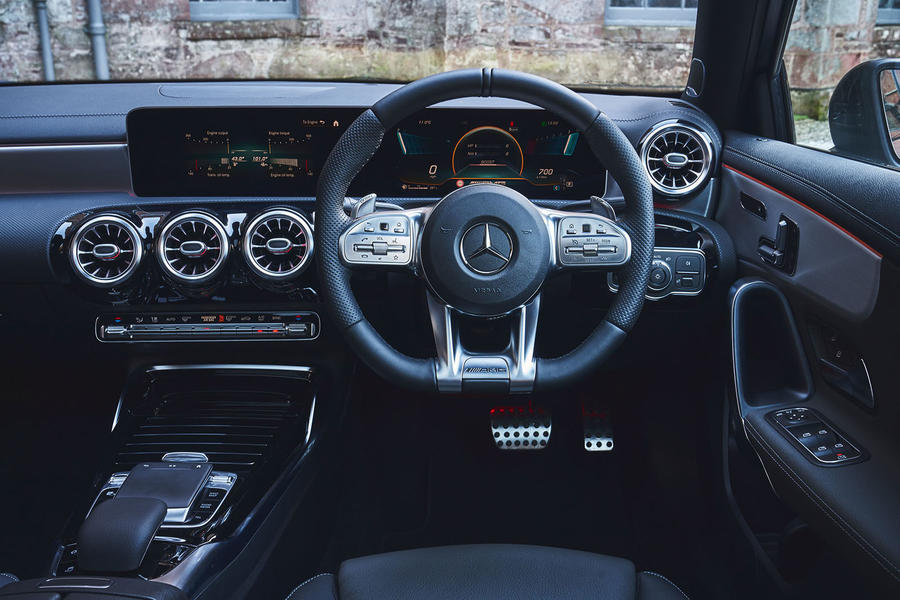 In the realm of circa-300bhp four-wheel-drive hot hatches, there’s nothing to match the outward character of the A35, and that’s largely down to the materially rich, almost eccentric cabin and some fierce exhaust tuning. If you’re bored of demure Volkswagen Group products, you’ll like it.

With similar vital statistics, the entry-level AMG is also every bit as heart-poundingly quick from point to point as its rivals from Audi and Volkswagen – perhaps quicker, so accomplished is its body control and engine response. In fact, the A35 is a more accurate, exhilarating device than the S3, and possibly the Golf R, too, even if it can't (or, rather, hasn't been set up to) match the flowing balance of the latter.

The passive suspension set-up, with too much of a B-road bias, is the only true blot in its copybook, because it limits this AMG's everyday appeal. Sometime in the very near future, we hope to find out first-hand whether adaptive dampers remedy this, but the A35 has enough strength elsewhere to go into upcoming group tests with no small confidence. 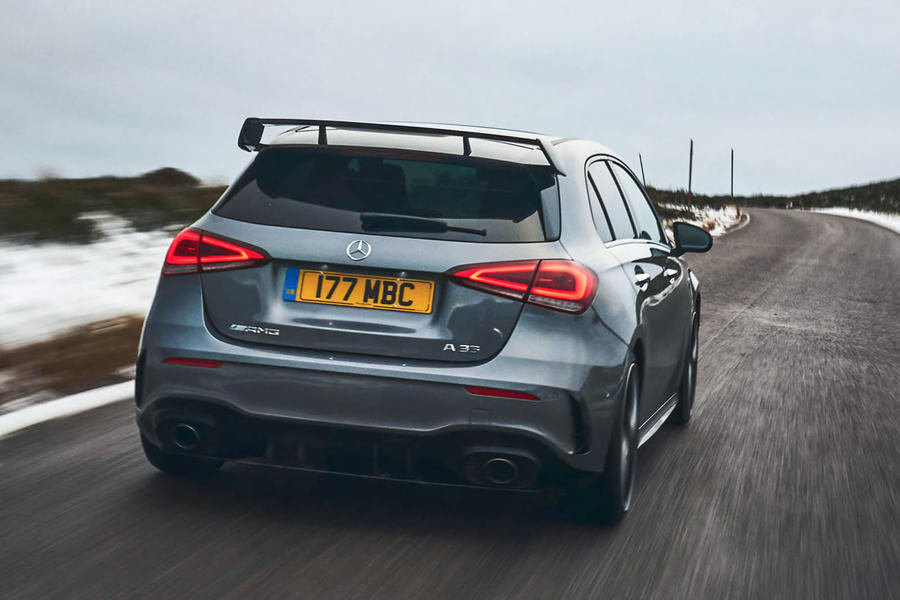 The MB dealership in

The MB dealership in Salisbury has one outside. It's the same colour as a banana and has a price sticker of £45K on the window!
simonali 28 January 2019

The one thing about this car

The one thing about this car that I find baffling is why the passenger needs to have a memory seat?

Good to finally have a "luxury" hatchback.

The one thing about this car that I find baffling is why the passenger needs to have a memory seat?

Overkill, perhaps, but we have passenger memory seat on one of our cars my wife an I both drive equally and it's quite useful. Granted, it's not as important to get an exact position like with the driver's side but it saves faffing around with levers and knobs evey time we "swap over" as we're very different heights and also have very different lumbar requirements ...

But it's great somone is finally putting this level of kit on a small car - we love our luxuries but C-Class/3-series/A4 segment cars are just so much bigger than the ones we had 10-20 years ago and we just don't need or want anything that large now. So we're seriously thinking about changing into an A35 from our Golf R but will reserve judgement until we've actually driven one (or even seen one for that matter!)

It’s not very desirable is it?

It is a premium brand, and this car carries an AMG sticker as well (for good or for bad). Priced accordingly. Mercedes is not for everybody and their uncle.

Its 2019. Thats what a decent quality new performance car costs.