Three trims are available: Sport and SE, Sport and AMG Line. The latter currently accounts for 50% of A-Class sales. First deliveries are due in June.

Although higher than its main rival, those prices come with promise of class-leading levels of connectivity, as well as a new interior with the most advanced version yet of the German car maker’s Comand infotainment system. Even the entry-level car gets twin infotainmant displays with voice control technology, emphasising the level of kit on offer across the line-up.

Mercedes-AMG A35 revealed with 302bhp

Rough and ready, but an elbows-out walkaround of the new 2019 Mercedes-AMG A45 'Predator' confirmed with more than 400bhp

The A-Class is once again offered exclusively in five-door form. It is the first of up to eight new compact models that are under development and due for launch by the end of 2020. 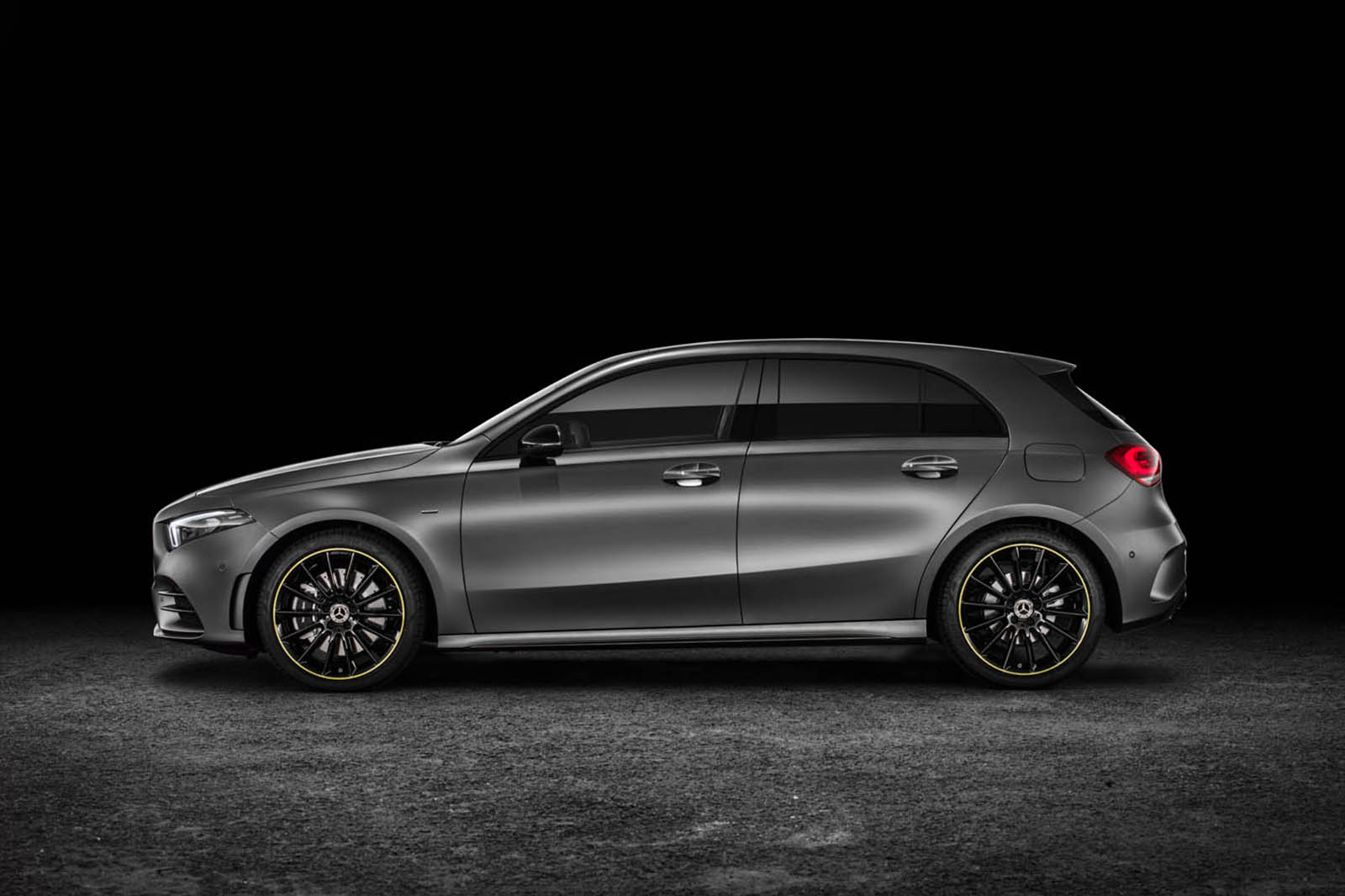 These include successor models to the existing B-Class, CLA, CLA Shooting Brake and GLA as well as a trio of new models: an A-Class saloon, an SUV model set to be called the GLB and the all-electric EQ A previewed at the Frankfurt motor show last September.

Mercedes boss Dieter Zetsche said at the car's reveal: "The A-Class has been a big driver of change at Mercedes. This last version is not a car that gives much of an impression of entry-level. It's a grown-up A-Class that fully embraces our vision of luxury.

"It looks and drives like a grown-up Mercedes. We have fundamentally improved the driving experience - and as a result of the torsional stiffness comfort has grown too. It has the abilities of a car from a higher segment. It is at C-Class level in these regards, and S-Class level in regards to driver assistance and safety systems."

Here's a look inside the new Mercedes-Benz A-Class. Full story: Opinion: the A-Class' success has only just begun

The styling of Merc’s new entry-level model, initially previewed by the Concept A saloon at last year’s Shanghai motor show, draws heavily on the look of the recently unveiled CLS, most notably at the front. The two cars share what has been dubbed a ‘predator face’, with an AMG-inspired grille and angular headlights that extend back into the front wings, giving it a distinctly more aggressive air. 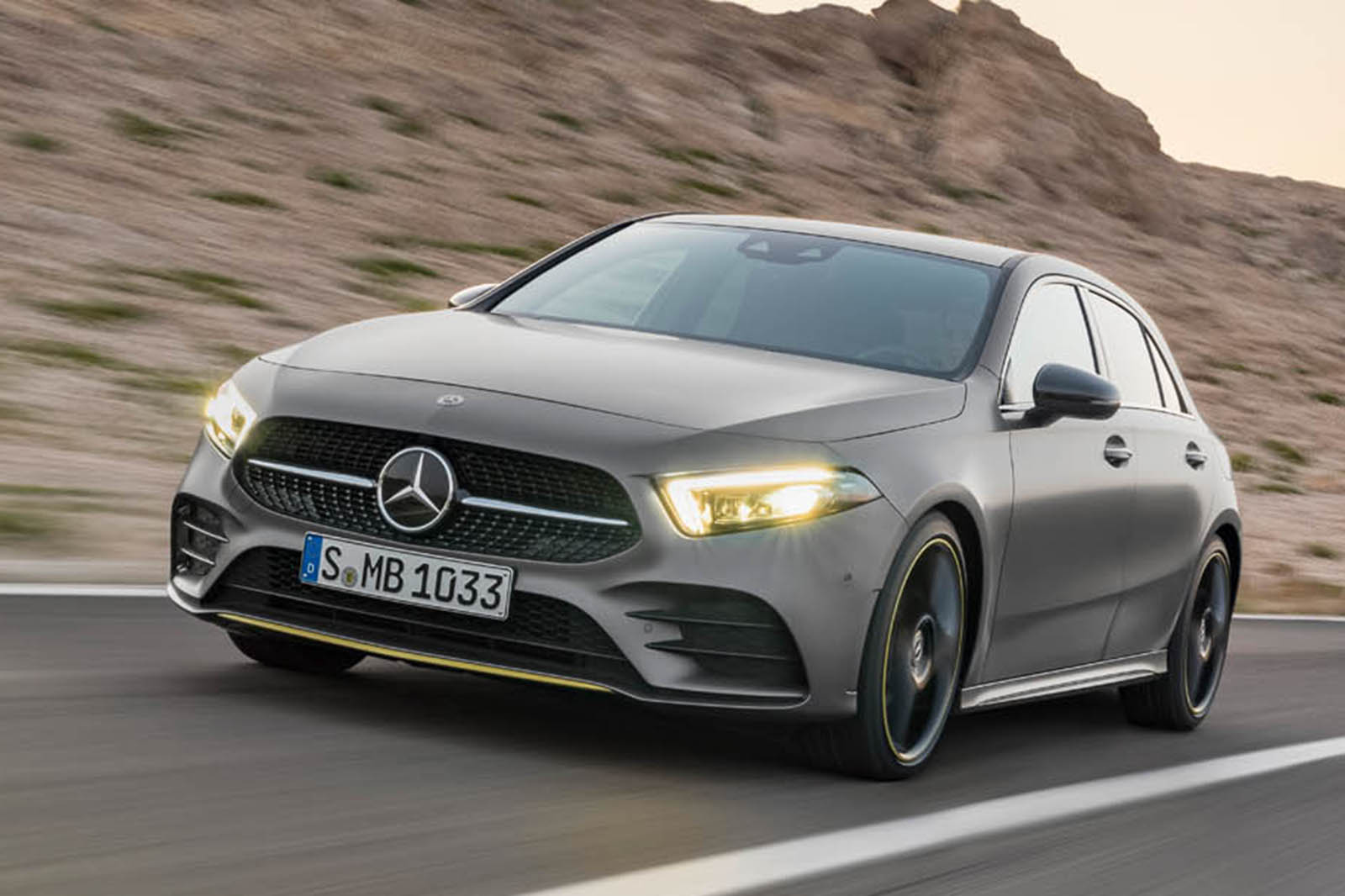 The newly designed headlights can be specified with optional Multibeam LED technology with adaptive high-beam assist plus, as well as individual city and motorway lighting functions and cornering lights.

New LED rear lights help to make the tailgate aperture of the A-Class 20mm wider than that of the outgoing model. Larger wheelhouses also allow Mercedes to offer 19in wheels as an option on non-AMG models for the first time.

The adoption of the larger platform has led to an incremental increase in the car’s external dimensions. Length is up by 120mm at 4419mm, width increases by 16mm to 1796mm and height extends by 2mm to 1440mm. 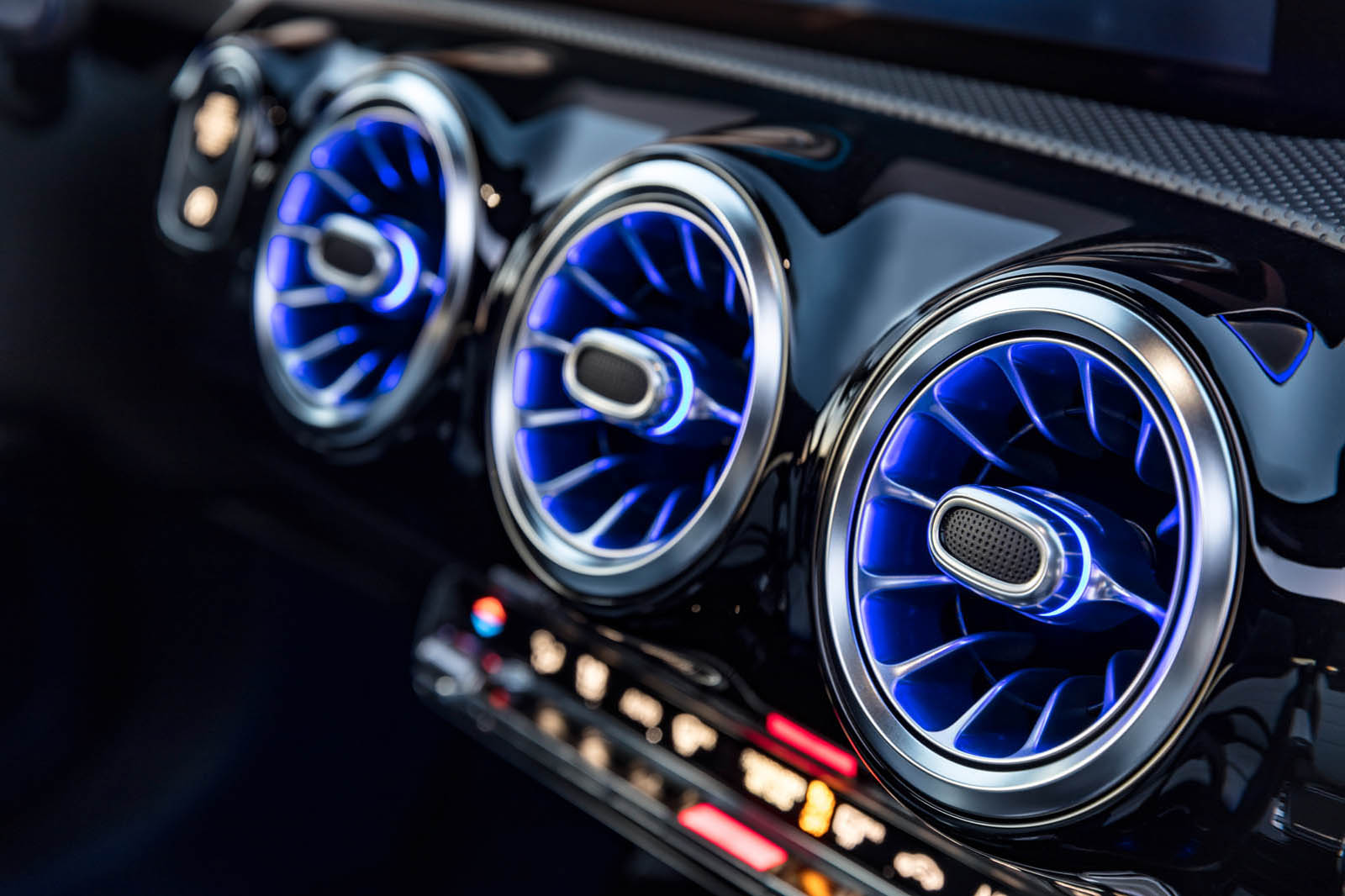 The increases have enabled Mercedes to improve the overall practicality of the A-Class. The rear door apertures are larger to ease entry to the back seats, and the boot’s capacity is 29 litres bigger than the old model’s at a nominal 370 litres.

It’s inside where Mercedes has concentrated much of its efforts on the new A-Class. The cabin receives a distinctive dashboard-mounted black panel display and switchgear similar to that first introduced on the S-class. The so-called widescreen cockpit comes in three themes: Classic, Sport and Discreet.

"As standard, there are two 7.0in displays, one for the instrument cluster and another which is the first touchscreen infotainment system to be offered in a Mercedes model." 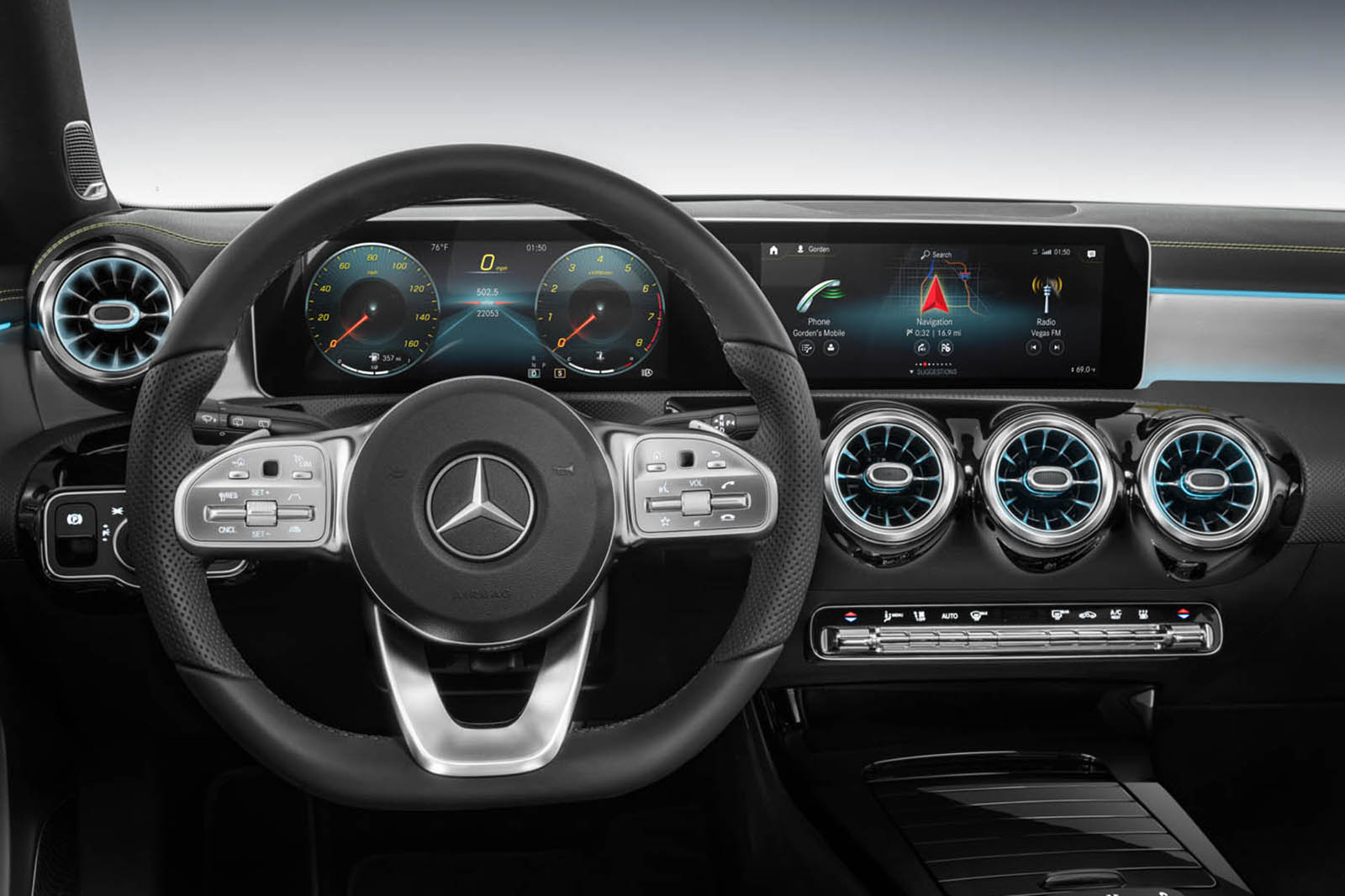 To unlock the full potential of its connectivity functions, the A-Class needs to be equipped with the optional extended version of the widescreen cockpit display, which features twin 10.3in screens, with a digital instrument display and touchscreen infotainment.

In this specification, it has a wi-fi hotspot and can also be optionally fitted with high-definition navigation with live traffic updates and car-to-X communication with map updates, a head-up display unit, traffic sign assist, augmented reality navigation and a Burmester sound system, among other functions.

The highlight of the MBUX connectivity system is an advanced optional speech recognition system designed to work along similar lines to Amazon’s Alexa voice service. It permits users to provide spoken commands through a “Hey, Mercedes” function that has been developed to recognise conversational language rather than specifically worded commands. 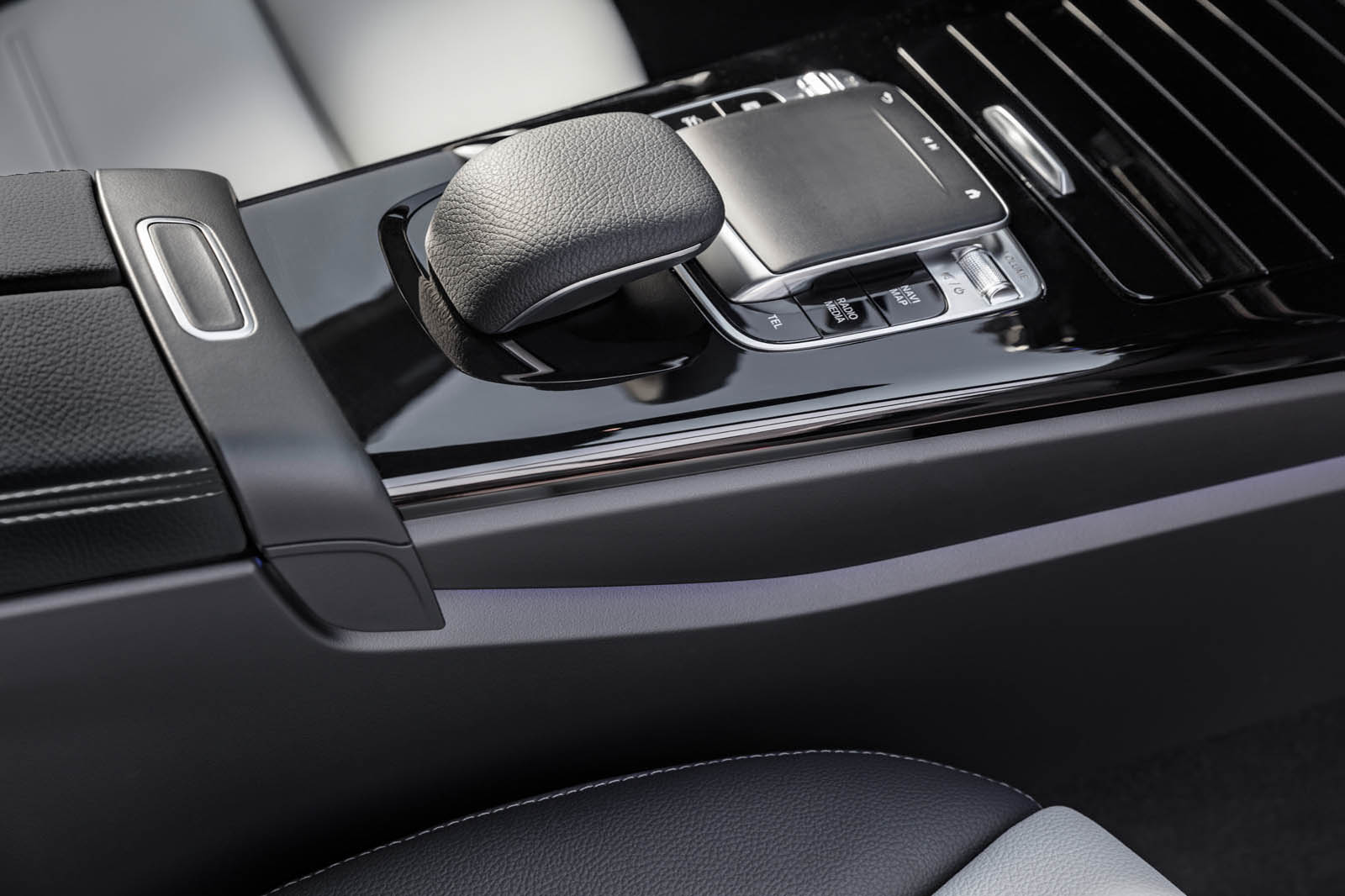 The new A-Class is available with the choice of three four-cylinder engines.

The A200 petrol is a heavily updated version of the Renault-Nissan-produced 1.4-litre unit delivering 160bhp and 184lb ft.

The more powerful A250 uses Mercedes’ recently updated 2.0-litre petrol engine, with 221bhp and 258lb ft. As the performance leader of the launch range, it is claimed to have a 0-62mph time of 6.2sec and a governed 155mph top speed.

Two more petrol models are expected later: an entry-level unit sitting below the A200 and a mid-range A-Class falling between the A200 and A250. 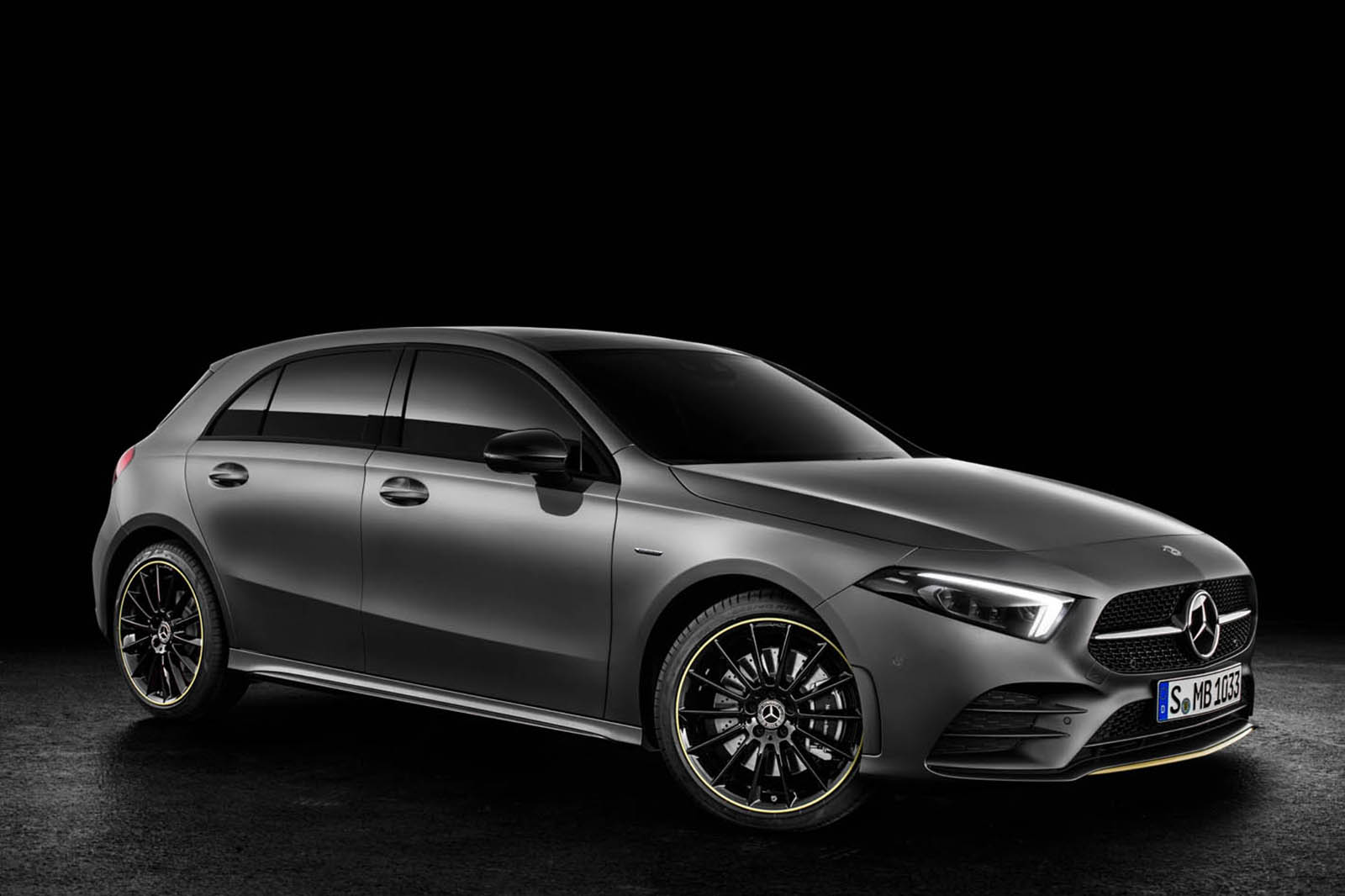 The sole diesel choice from the outset of sales is the A180d, which uses a 1.5-litre unit also produced by Renault-Nissan and delivering 114bhp and 192lb ft.

Claimed to return 68.9mpg and with average CO2 output of 108g/km on the combined cycle, it comes as standard with a particulate filter that uses a urea solution to reduce emissions. A more powerful diesel will also arrive later.

A newly developed 4Matic four-wheel drive system will also be offered. Now featuring electro-mechanical operation instead of the electro-hydraulic set-up used on the outgoing version of the A-Class, it provides a fully variable apportioning of drive between the front and rear axles for improved traction. 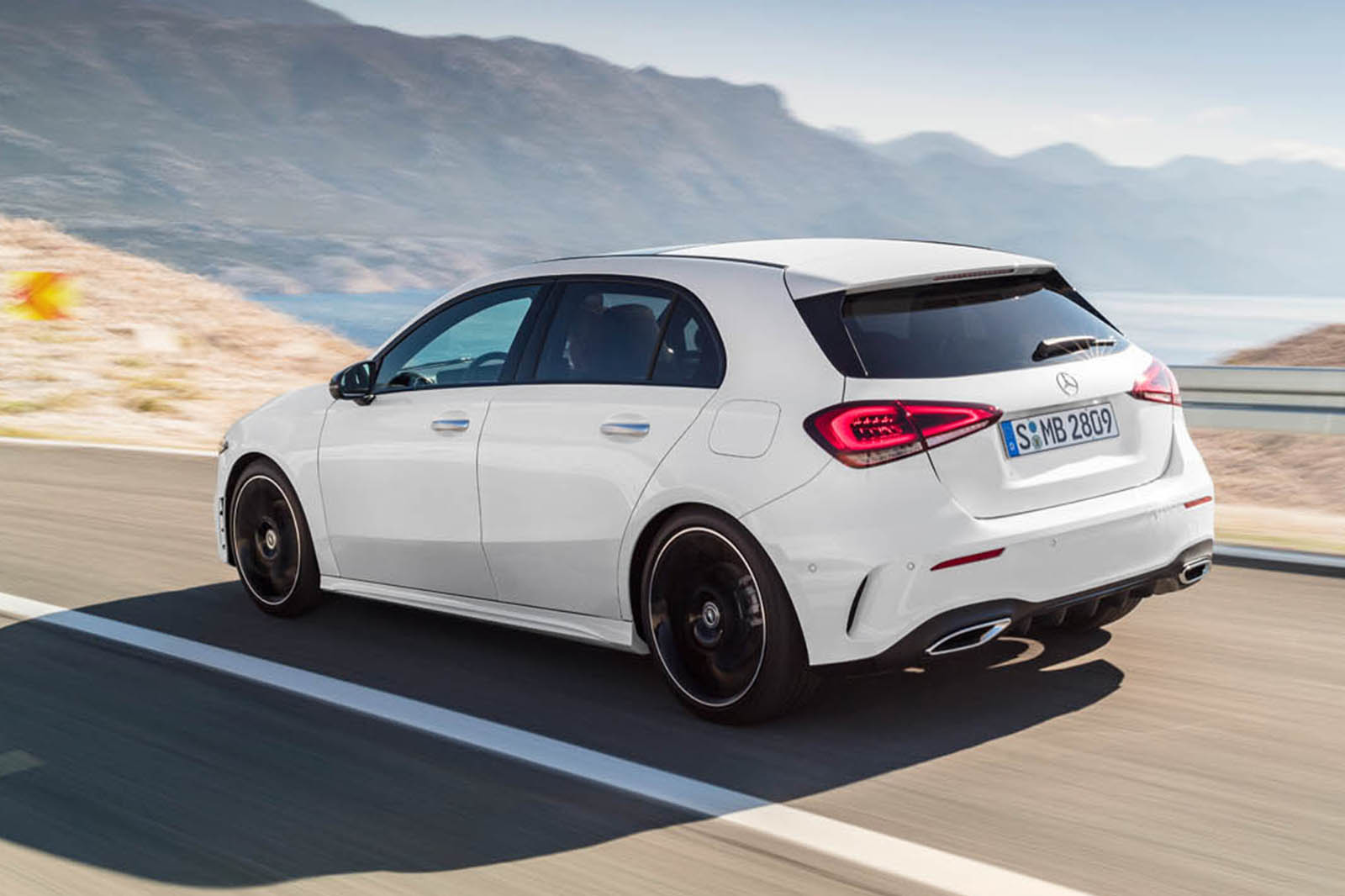 In a further departure from its predecessor, the new A-Class will also be sold with the choice of two suspension systems, depending on the model.

All feature a MacPherson- strut front end, but Mercedes has decided to provide certain models, including the A200 and A180d, with a new torsion-beam rear end in a move similar to that undertaken by Volkswagen with the Golf.

The more powerful models, including the A250 as well as those running the optional 4Matic four-wheel drive system, are fitted with a modified version of the old A-Class’s multi-link rear end.

The standard suspension on all models is tuned for a so-called comfort set-up.

It is mounted 15mm lower than before and comes with Mercedes’ Dynamic Select system, which allows the driver to alter the characteristics of the throttle, gearbox and steering. Buyers can also opt for active damping control. This offers the choice of both comfort and sport settings via the Dynamic Select system.

Where it all began for the A-Class

The A-Class started as the Vision A 93 study, revealed at the Frankfurt motor show in 1993. The front-wheel-drive concept became the precursor to Mercedes’ entry into the compact model segment four years later. 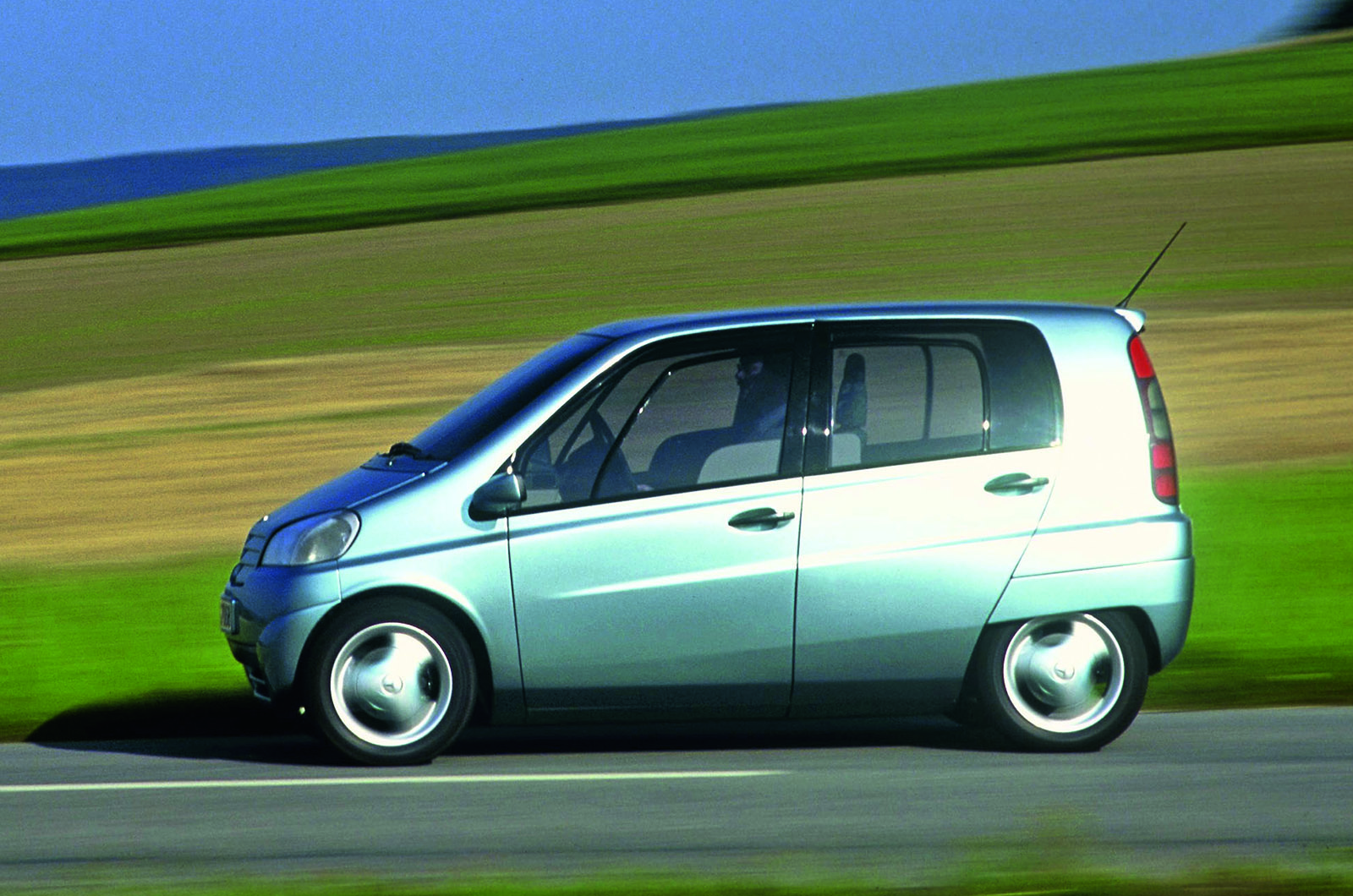 The arrival of the A-Class brought criticism: a journalist’s manoeuvring test of the car found safety issues. Mercedes responded by giving the car a revised suspension system and electronic stability control as standard.

This could be the iPhone of cars

I think Merc has done a great job of making a car in this class aspirational and desirable. Sure it's expensive, but if it feels expensive and delivers on the promise of C-Class comfort this time, it will be more than just another family hatchback, it will be an object of desire. And if it is, Mercedes will make massive money on it. Just needs a hybrid version to round off the range.

An astonishing price tag for a Megane with high-tech cosmetic makeup.
Andrew1 5 March 2018

An astonishing price tag for a Megane with high-tech cosmetic makeup.

I take it you are a car brand snob but the A Class is built on Daimler's MFA2 platform.

Man, YOU -- and not @Luigi27 -- seem to be mesmerized not only by badges, but also by some funky acronyms like MQB, MFA2 and so on.

...Because this MFA2 platform (equal some steel profiles with many small/big holes :-)) is also developed with Renault, if you did not know it.

is also developed with Renault, if you did not know it.

And that makes the A Class a Megane? And even if it does, so what? Just because they collaborated with Renault it makes it lesser car? Why? 'Cause you don't like Renault?

is also developed with Renault, if you did not know it.

And that makes the A Class a Megane? And even if it does, so what? Just because they collaborated with Renault it makes it lesser car? Why? 'Cause you don't like Renault?

I do like Renaults (used to own a couple in the late nineties, including the one and only Clio Williams imported in Romania - no.396 - a hoot to drive), but I also like Mercs (none possessed, but a whole bunch tested as an ex-motoring journo.)

What I don't like at all is a Megane (well, with another coquille and upgraded interior) with a Daimler Benz badge and an abyssmal 80-90% price hike - as simple as that.

Though, there's nothing new here, whilst the same unexplainable price canyon exists for example between the Twingo GT and the Smart Fortwo Brabus -- twin midgets from another Renault-Mercedes cloning  adventure.

Conclusion: no hard feelings, 'cause I'm just stating facts, being also pretty well informed about the real costs of some so-called *premium* upgrades in the industry (delocalized a lot for bigger profits here in Eastern Europe -- like Ford did it in Craiova, Renault in Pitești and so on.)

Doomed b4 the Elk test.

"The 1.8d starts from..."  Well who cares, whatever our environmental views are, it's safe to say diesel sales in this segment /size of car are now history. It's case is further dealt a blow with the fact this 1.4, just like it's larger oil burners, requires the use of piss additive to  meet environmental concerns. Which leaves the petrol powered base car, (which apparently will save lives but contribute more to global warming) starting from over £28,000 (with metallic).

It's just total bonkers. No mention of it in the text but they're going to have to use a 3cyl job at somepoint or the A Class is destined to failure as residuals will be hit hard. When their chief rival BMW let alone any other manufacturer can produce a new car for £4000 less, the writing's on the wall before the car hits the road. No Elk test needed this time before MB have a rethink.