Vauxhall’s new large hatchback gets a spacious, high-quality cabin and sheds weight in a bid to steal buyers from premium rivals; on sale from June
Open gallery
Close

The new Vauxhall Insignia Grand Sport hatchback is on display at the Geneva motor show, and reveals Vauxhall's plan to steal sales from executive saloons such as the BMW 3 Series and Mercedes-Benz C-Class.

The Insignia Grand Sport is a new name for this second-generation Insignia, which is scheduled for UK deliveries in June. The new range will be crowned by a 247bhp turbocharged 2.0-litre petrol version with all-wheel drive.

The five-seat, five-door Insignia Grand Sport is based on an all-new and modular General Motors platform called Epsilon 2 (or E2 for short) that allows the car to be up to 175kg lighter than the model it replaces, despite a marginal increase in size. The base model weighs around 1400kg.

The Insignia Grand Sport also brings with it a new look, inspired by the well-received Monza concept car of 2013, which will be ushered in across the rest of the Vauxhall range in due course. 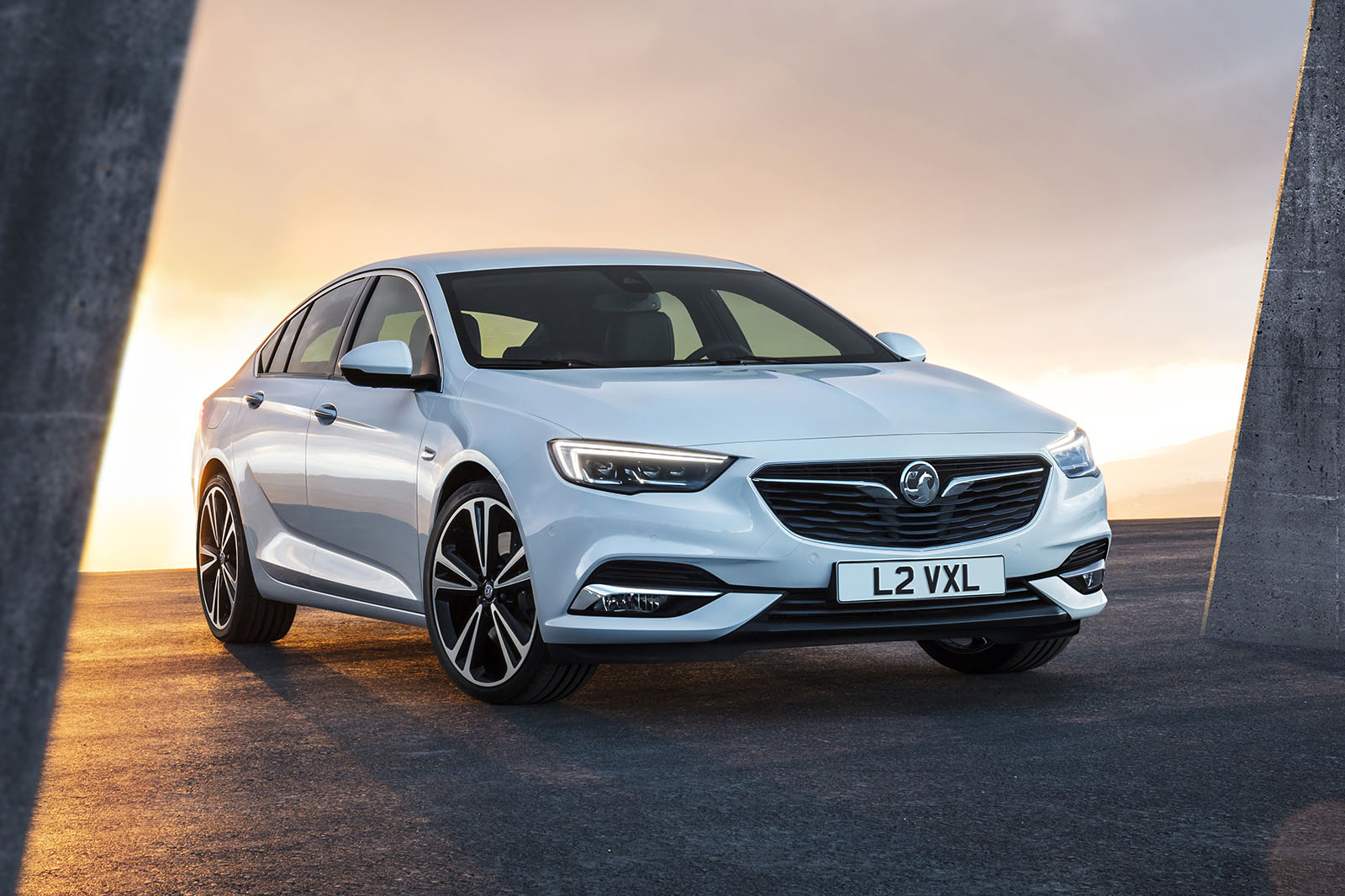 It’s this new look, reduced weight and a higher-quality and more spacious interior with boosted connectivity and infotainment options that, Vauxhall hopes, will make the car a credible alternative in the eyes of buyers who might otherwise go for a 3 Series, C-Class or Audi A4, as well as traditional rivals such as the Ford Mondeo and Skoda Superb. Vauxhall also hopes these same attributes will allow the car to have the same impact as the bold original, which went on sale in 2008.

The interior has been made more spacious than the original Insignia’s, with rear interior space to match that of an Audi A6 or Volvo V90. The new Insignia has connectivity options including Apple CarPlay and Android Auto smartphone mirroring, a wi-fi hotspot to connect up to seven devices, wireless charging for smartphones and an enhanced version of Vauxhall’s OnStar assistance service.

The perceived quality of the materials inside is now better, including on the new dashboard layout, which Vauxhall saw as a key area to improve the car. The driving position has been lowered by 30mm and the front seats can be had with functions including massages. The outer two rear seats can also be equipped with heaters. The engine range is made up exclusively of turbocharged four-cylinder units and is crowned by a 247bhp 2.0-litre engine. This unit is hooked up to a new eight-speed automatic gearbox and an all-wheel drive system that features GKN drivetrain technology similar to that on the Ford Focus RS. It includes torque vectoring for the first time on a Vauxhall.

The only new engine in the range is a 1.5-litre petrol unit, which has outputs of 163bhp and 184lb ft, and it drives through a six-speed manual gearbox. This new engine is a development of the 1.4-litre turbo found in the Astra and it has been created to ensure that the Insignia Grand Sport is given the right-sized engine to power a car of its size and weight and therefore improve the real-world economy figure.

There are also 1.6-litre and 2.0-litre diesels in the line-up, outputs of which will all be upwards of 110bhp and will be confirmed alongside the performance and CO2 figures of the rest of the engine range closer to the spring launch. The Insignia Grand Sport is front-wheel drive as standard.

A VXR model is unlikely to appear in the Insignia range this time around. Performance diesels, a cooking GSI-style model and the Q-car-like 247bhp all-wheel drive petrol model are all understood to be preferred by company bosses than an all-out sports saloon.

As part of the overall weight reduction, the body-in-white has been made 59kg lighter than the current model’s. Meanwhile, the car’s length has been increased by 55mm to 4897mm, which makes it closer in size to the BMW 5 Series than the 3 Series. 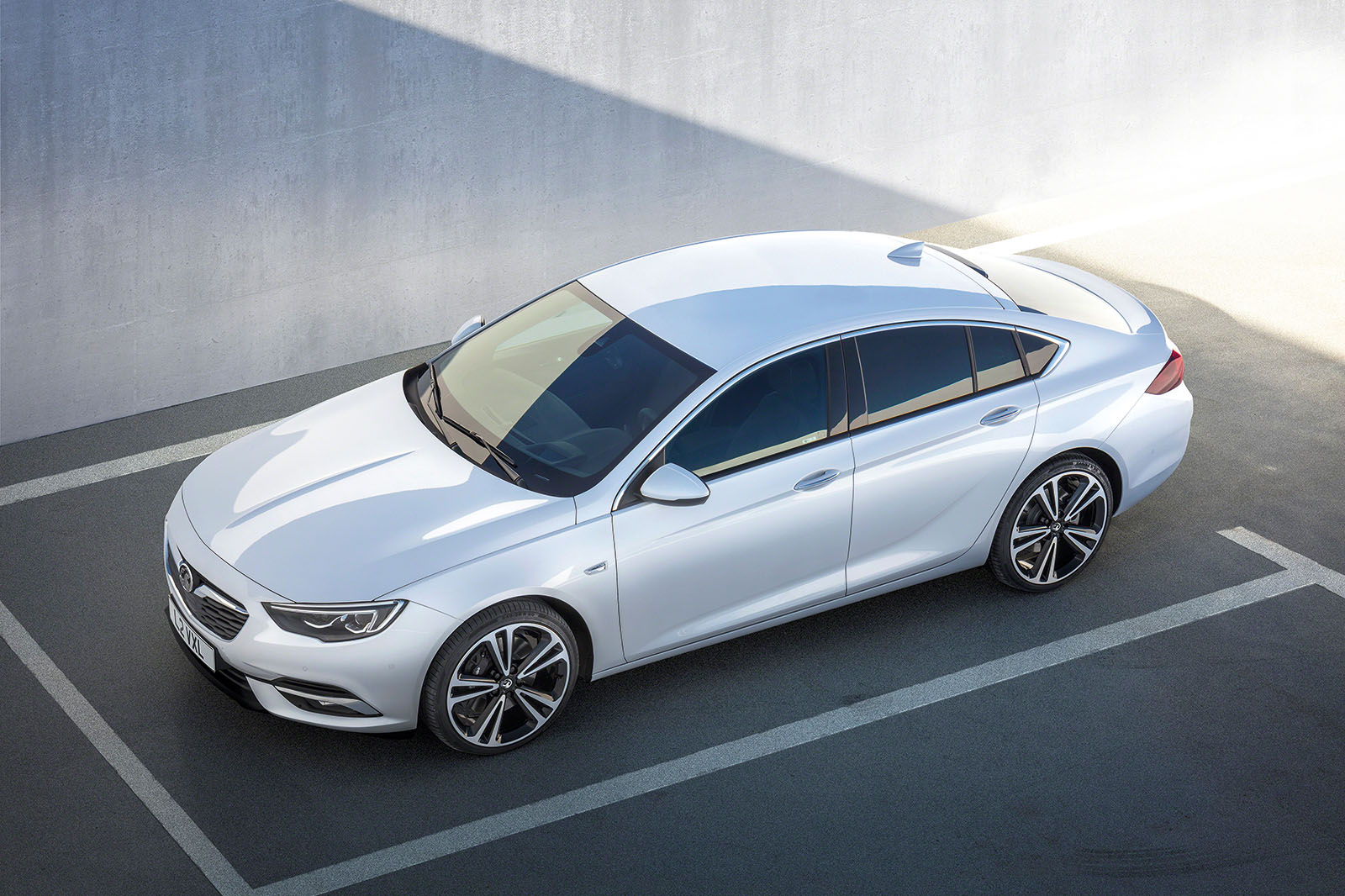 The wheelbase has had a significant 92mm increase to 2829mm to help boost cabin space, but the front and rear overhangs have been reduced to improve the car’s stance.

There’s a marginal 7mm increase in width to 1863mm and the tracks are up 11mm to 1596mm at the front and 1599mm at the rear. The car’s height has been reduced by 29mm, but head room has improved as a result of lower seating positions.

The suspension features MacPherson struts at the front and a five-link set-up at the rear, with adaptive dampers an option. The adaptive FlexRide chassis function allows the driver to switch between Standard, Sport and Tour modes. These alter the stiffness of the suspension, the throttle response and the steering and allow for less intrusion from the ESP system, depending on the mode.

A whole host of driver assistance systems are also offered on the new Insignia Grand Sport, including a head-up display, adaptive cruise control, lane keeping and lane departure warning systems and a rear cross-traffic alert that lets you know if you’re about to reverse into oncoming traffic when leaving a parking space. Vauxhall’s adaptive IntelliLux LED matrix lights are also offered, with twice as many LEDs as on the Astra.

This five-door hatchback version will arrive first, with an estate and rugged Cross Tourer model following in due course to complete the range. Prices for the hatchback are set to remain broadly unchanged from today’s Insignia range, with an entry-level price of about £18,000.

Decent job but not exquisite. Hopefully it drives even better than the current Insignia which is comfortable but lags some extra driving dynamics. Opel/Vauxhall continue to mistakenly offer LEDs as a very expensive option.
winniethewoo 8 December 2016

Im partial to a bit of jelly myself and often frequent the jelly section in M&S. Their Exotic Fruit jelly cubes are especially delightful. However, I don't let my liking of jelly cloud my judgement about good design.
winniethewoo 8 December 2016

And the Mokka AND the Meriva AND the Adam AND the Zafira. I would include the Insignia on that list also. All of them look like they came out of jelly moulds and look insubstantial. Nothing compares to the 3rd gen Astra F though the original jelly meister Honestly that car looks like Vauxhall picked up a kids car jelly mould and scaled it up. I bet you like Jelly JRL and Vauxhalls incite in you happy memories eating green wobbly stuff in your childhood.
JRL 10 December 2016

And the Mokka AND the Meriva AND the Adam AND the Zafira. I would include the Insignia on that list also. All of them look like they came out of jelly moulds and look insubstantial. Nothing compares to the 3rd gen Astra F though the original jelly meister Honestly that car looks like Vauxhall picked up a kids car jelly mould and scaled it up. I bet you like Jelly JRL and Vauxhalls incite in you happy memories eating green wobbly stuff in your childhood.

I've seen you chat a lot of rubbish in the comments before but this tops it off. Obviously you are very old fashioned, lusting after a nice brown Rover. Vauxhall seem to be on a roll at the moment, putting some great cars out there, long may it continue!