BACK TO ALL NEWS
Currently reading: 2017 Mercedes-Benz E-Class Cabriolet - details and first prototype ride
UP NEXT
2025 Volkswagen ID 1 is Spanish-built, £17,000 entry EV

This is the 2017 Mercedes-Benz E-Class Cabriolet. The heavily structured surfacing, defined side feature lines and prominent rear wheel arch hunches are no more.

For 2017, it gets a cleaner, more shapely and unreservedly eye-catching appearance that sets the stylistic tone for a new generation of Mercedes models in future years.

It also has a classy new interior that has more space for passengers as well as all of Mercedes-Benz’s latest digital and connectivity technology, plus a host of new driving aids and safety features, most of which were revealed on its fixed-roof sibling, the E-Class Coupé, at the Detroit motor show earlier this month.

While its predecessor, launched in 2009, was the four-seat cabriolet in Mercedes' line-up, the new model is part of a trio of such cars, alongside the smaller C-Cass Cabriolet and the larger, more luxurious Mercedes-Benz S-Class Cabriolet.

The E-Class Cabriolet gets a range of new and upgraded engines, which are mounted longitudinally and channel drive to either the rear or all four wheels, depending on the model. The car's new platform is also more rigid than the previous-generation model's, which was taken from the C-Class. Mercedes’ latest evolution of air suspension, Air Body Control, is also available.

“It’s a new car,” says Christian Früh, the man in charge of the new E-Class Cabriolet's development. “There’s little or nothing shared between the new model and that which it replaces.” 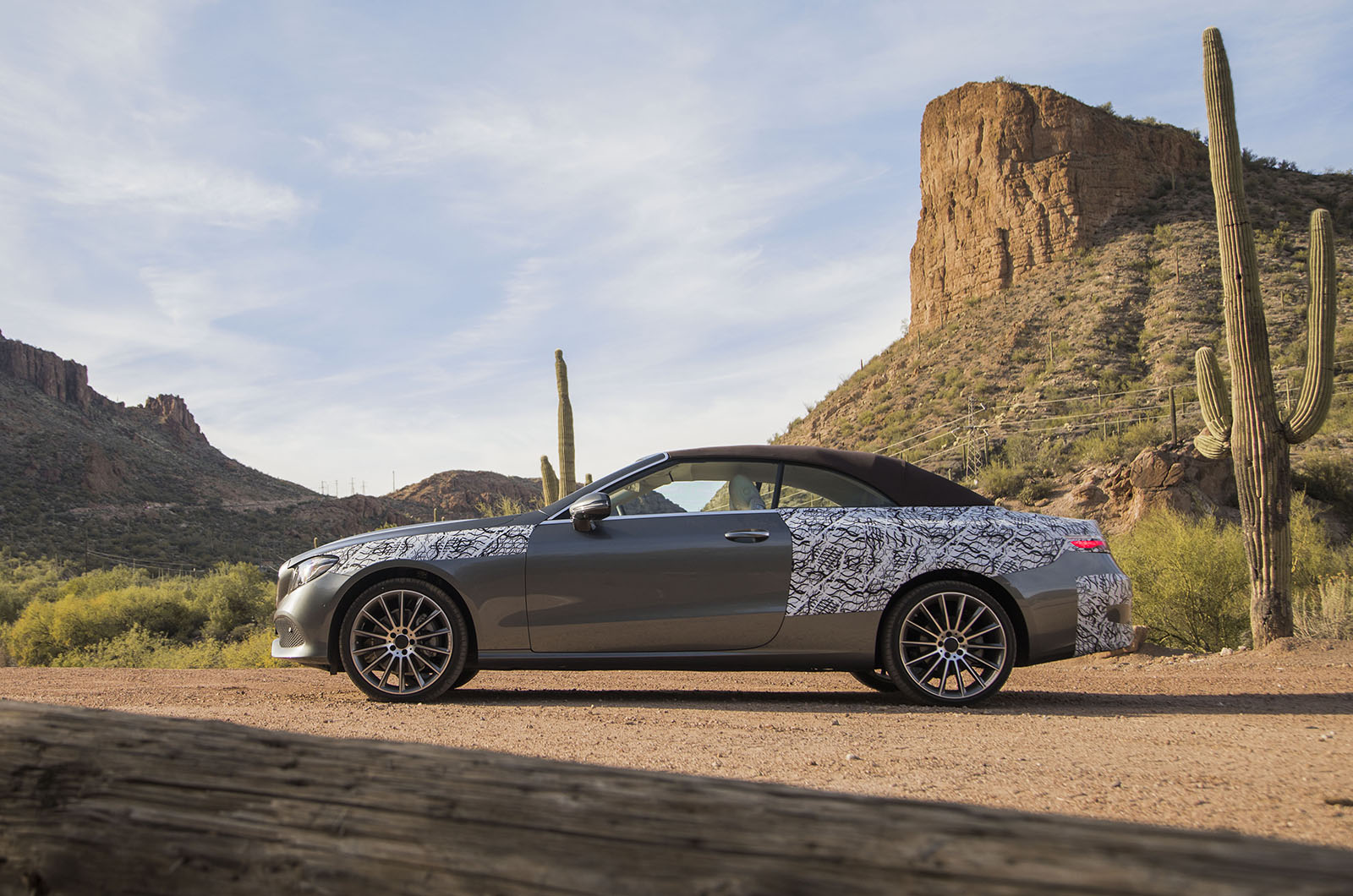 Autocar can also confirm AMG is developing a new E 50 Cabriolet 4Matic powered by a reworked version of Mercedes' new twin-turbocharged 3.0-litre in-line six-cylinder petrol engine and an integrated start motor with an electronic boosting function, developing in the region of 450bhp.

The E-Class Cabriolet is larger than its predecessor. Official measurements are yet to be made official, though Früh indicates they match the 4826mm length, 1860mm width and 1430mm height of the E-Class Coupé. This makes it 128mm longer, 74mm wider and 32mm higher than the previous E-Class Cabriolet.

The car's folding roof, engineered by Austrian specialist Magna, draws heavily on the design of the smaller C-Class Cabriolet's. The fully automatic structure folds in a familiar scissor action and stows in its own dedicated area underneath a plastic tonneau cover behind the driver. Putting the roof up or down takes just 20sec.

The construction of the three-layer hood, which can be operated while driving at speeds up to 31mph, is described by Früh as being considerably more sophisticated that that of the old E-Class Cabriolet, in terms of structure and materials. “We have spent a lot of time and effort perfecting the inherent strength and acoustic qualities, both virtually on the computer and in real-world testing,” he says. 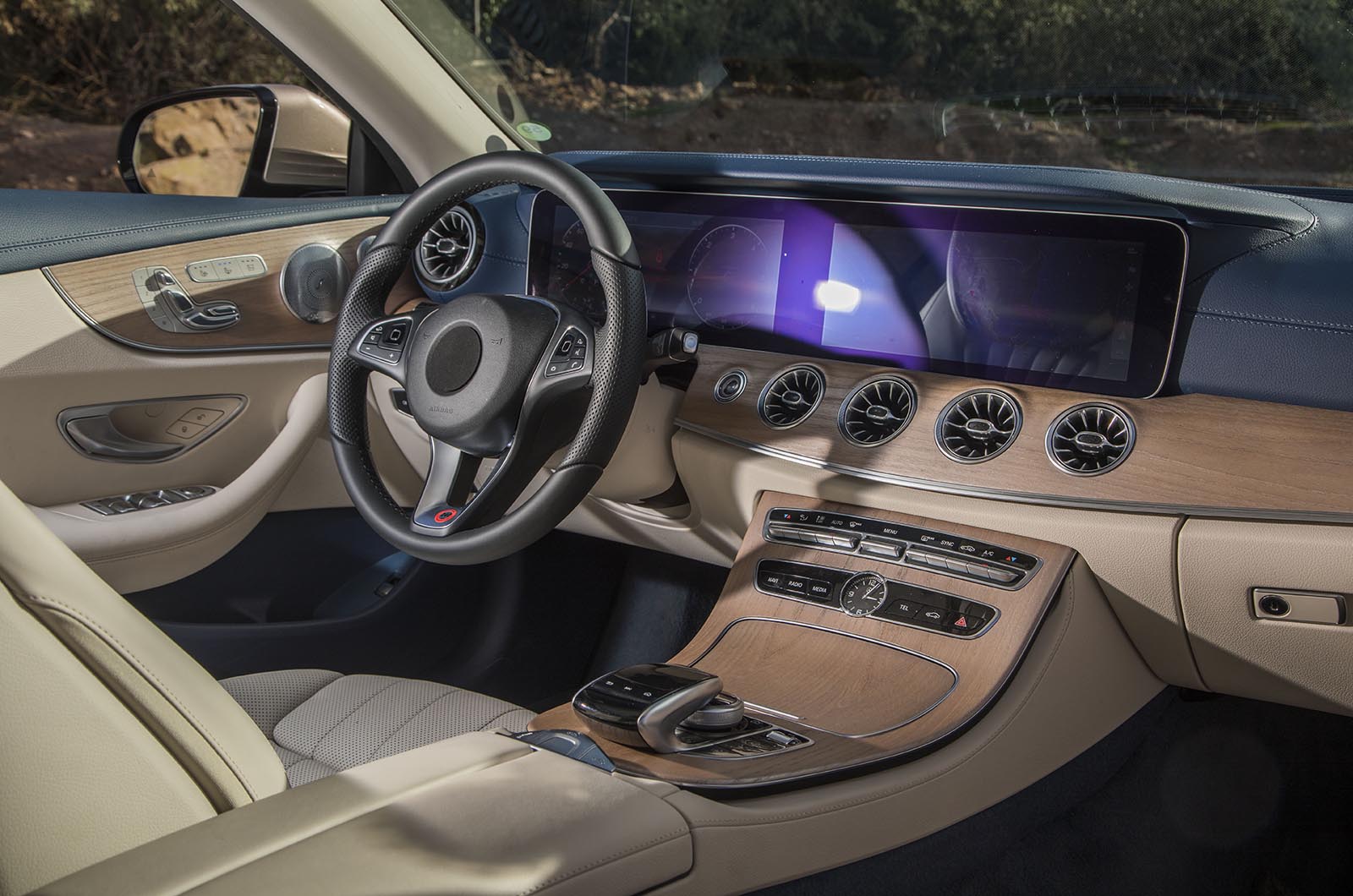 Mercedes-Benz claims a boot capacity of 360 litres with the roof up, meaning the new car has 30 litres less room than its predecessor and, despite a longer wheelbase and a larger body, just 5 litres more than the smaller C-Class Cabriolet. However, the E-Class Cabriolet's rear seats can be folded down for more storage space.

Occupant protection, meanwhile, is taken care of by a stronger windscreen, which features reinforced anchoring points and high-strength steel buttressed frame. There are also two substantial beams integrated into the rear bulkhead, which fire through a plastic trim panel should sensors detect the car is going to roll over, the metal structures are. There are also high-strength steel strengthening elements within the car's sills and rear bulkhead.

The E-Class Cabriolet has the same interior as the E-Class Coupé, with a new dashboard, instruments and controls. An optional 12.3in digital instrument display and multifunction steering wheel featuring touch sensitive pads as part of the latest Comand APS NTG 5 infotainment system is also available. Passenger room is better all-round, but most notably in the rear, which has greater leg and shoulder room than before.

Impressions from the passenger seat

To find out what the new drop-top E-Class is like, we traveled to Arizona, US, where Mercedes-Benz is conducting the car's final validation tests ahead of its planned world debut at the Geneva motor show in early March.

A stable climate, plenty of coarse-chip bitumen surfaces and abundant gravel roads with plenty of dust make for perfect testing conditions. That it's also home to its alliance partner Nissan’s vast technical centre located on the outskirts of Phoenix, where Mercedes-Benz now conducts a good deal of new model development testing, is also key to why this location was chosen. 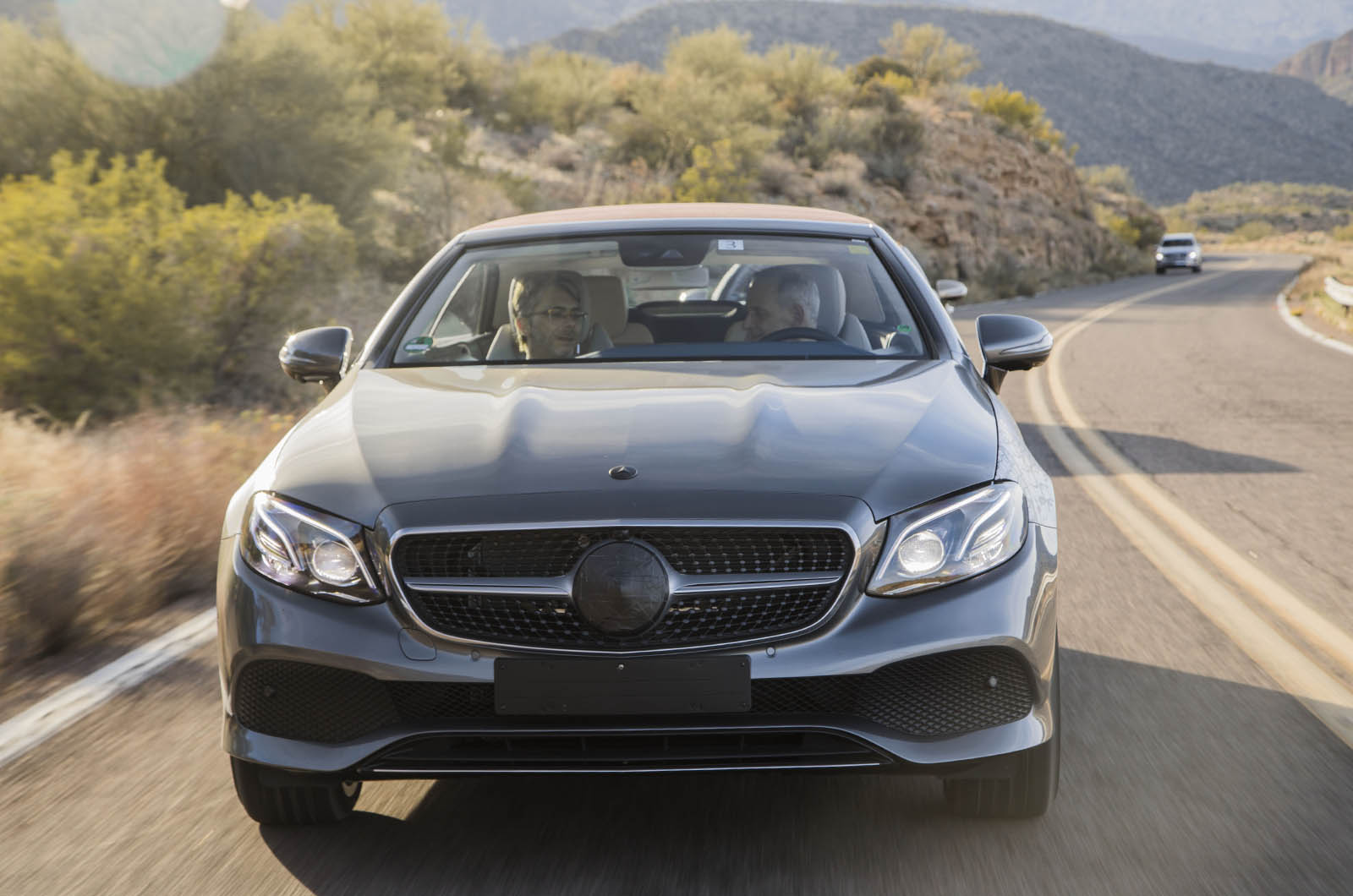 There are two cars on hand, lightly disguised hand-built prototypes that have already been put through an arduous two-week testing program. They’re here for some final calibration and the sign-off of 'project A238', as the model is codenamed, before the start of production at Mercedes' Bremen factory in Germany and a UK launch later this year.

The prototype we’re riding in is the four-wheel-drive E 200 4Matic. It has the latest version of Mercedes' M274 four-cylinder turbocharged 2.0-litre petrol engine, which, as in the E 200 Coupé, makes 181bhp.

The other car is a rear-wheel-drive E 300 d. While Früh is tight-lipped on the exact details of its engine, it's believed to be an uprated version of the new OM654 four-cylinder turbocharged 2.0-litre diesel, with more than 240bhp.

Whether these two engines will be offered in the UK is yet to be confirmed.

When we hit public roads after a brief outing on Nissan’s test track, there’s imbibing smoothness, if not great muscularity, to the E 200 Cabriolet.

One of its key strengths is the impressive integration of its engine and gearbox, and the resulting refinement.

And despite the added weight brought on by the additional stiffness, the car feels tremendously composed, with barely any scuttle shake, even on corrugated surfaces. It’s best work is done at a constant throttle cruise at typical motorway speeds, although it also proves quite adept on more challenging roads. There’s a small amount of body lean when you corner hard in Sport mode, but otherwise it's surprisingly agile, with progressive and predictable handling when pushed hard. 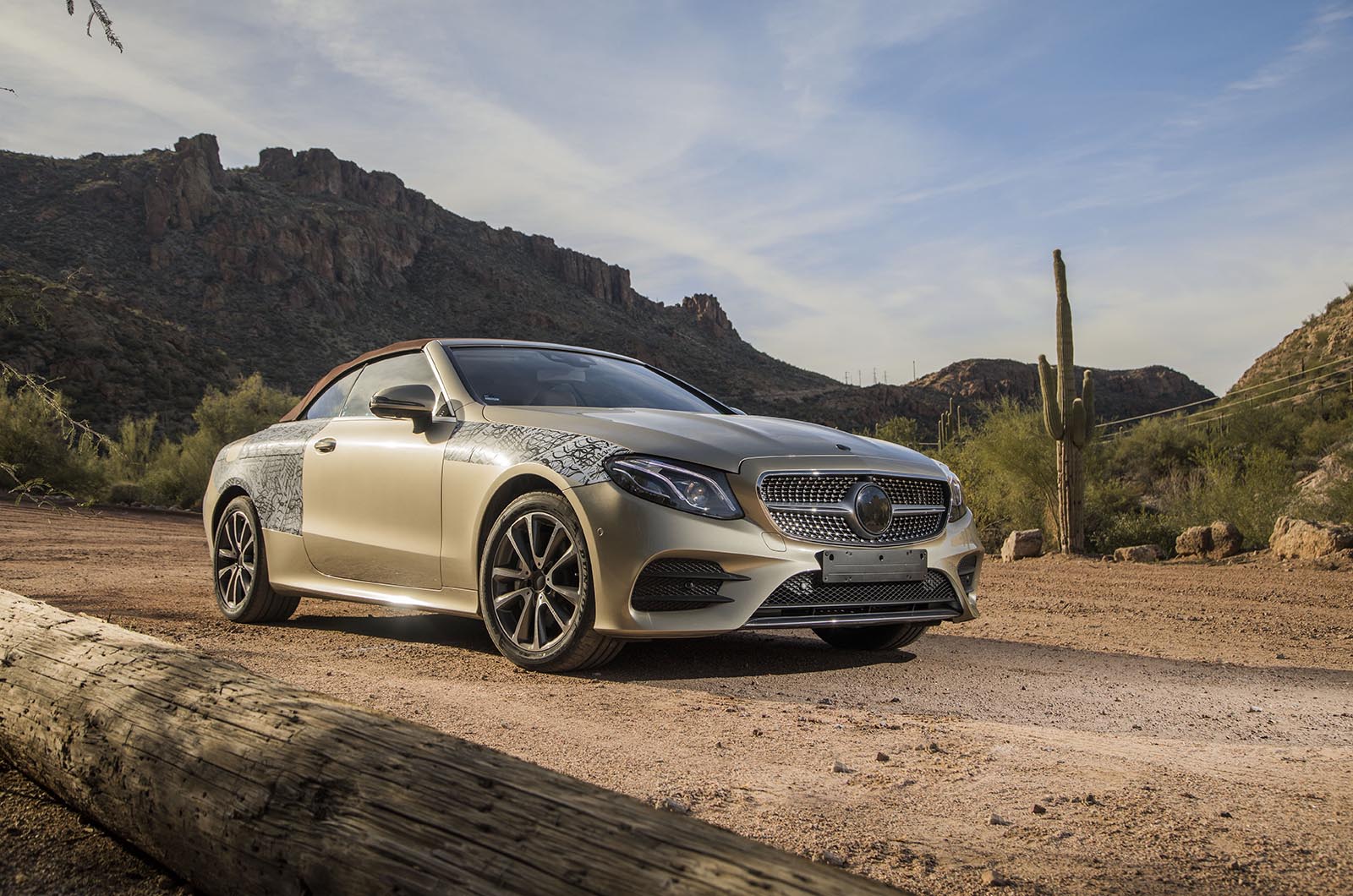 A significant development in the on-road character is down to the latest Air Body Control suspension, which will be optional on lower trim levels and standard on more up-market variants. It reacts faster to road imperfections than the previous Airmatic system. Together with the more rigid platform, this gives a far more subtle and composed ride than that of the previous E-Class Cabriolet.

Nasty bumps are soaked up with impressive suppleness, and with little vertical body movement in Comfort mode. It's only on occasion - usually in corners - that you feel a disturbance big enough to unsettle the otherwise outstanding ride.

Früh says his engineering team has worked hard to broaden the characteristics of the E-Class Cabriolet’s standard Dynamic Select system, which gives you four different drive modes: Eco, Comfort, Sport and Sport Plus. “The tuning is unique. We’ve got greater wheel travel than before, and you can really feel it from behind the wheel."

Pushing hard over a demanding canyon road in Sport mode, Früh says: “There’s greater feel and feedback from the steering. It’s now more precise and less prone to kickback than before. There’s also greater purchase and grip from the front end. You can carry greater speed and lateral forces through corners. It soaks up irregularities with greater control and subtly than before.”

With a drag coefficient of just 0.27, there's very little wind buffeting within the interior, even at high speeds. This is aided by a wind deflector, which fits between the rear seats at the rear of the cabin, Mercedes' Aircap system, which deploys from the top of the windscreen.

I think it looks good and

I think it looks good and more rear seat room is welcome, getting in to an RS5 or C63 or previous E Class coupe is challenging for me and even my lithe 6ft2 in son-we tried them out! As I fancy a stylish coupe for the old man's "last hurrah"Just hope they put the 4.0Litre AMG V8 into it.
The noise would be wonderful blasting through a canyon!
poon 25 January 2017

...a big improvement on its hard-top sibling simply because it lacks that version's unfortunate 'split' rear side-window.
View all comments (5)