BACK TO ALL NEWS
Currently reading: Friends and foes: who won F1's 2019 team-mate battles
UP NEXT
Testing the UK's newest circuit in a Porsche Cayenne Turbo GT

For F1 drivers, the term ‘team-mate’ is often loaded with irony. We consider the 10 pairings of 2019 to judge who got the better of the rival who matters
Open gallery
Close

Few sports can match motor racing when it comes to statistical anomalies skewed by circumstance.

Stirling Moss was unquestionably one of the finest drivers of all time yet has as many world titles to his name as Adolfo Schwelm Cruz, who started but a single world championship grand prix (Argentina 1953, since you ask). Jim Clark is likewise an enduring talisman yet accumulated fewer than half the points attributed to professional fifth to seventh-place finisher Sergio Pérez, largely because you now score more for ambling home fifth, a lap in arrears, than Clark would have collected for winning by the same margin. And despite having graduated from Farley’s Rusks only about 10 minutes ago, Max Verstappen has already picked up more points than Alain Prost managed in a career ripe with 51 grand prix victories.

Even during the course of the same season, the validity of comparisons is sometimes masked by arcane detail: unexpected safety car interludes, fluffed pit stops, changeable weather, Ferrari’s occasional ability to convert near-certain victory into a distant fourth place… Here, we attempt to steer a course through the variables to establish who has got the better of whom (sometimes, at least) in 2019.

Sebastian Vettel vs Charles Leclerc: The first relatively inexperienced young driver to land a Ferrari race seat since Gilles Villeneuve in 1977, Leclerc proved by race two that he wasn’t just capable of matching his illustrious sidekick: he took pole by three-tenths and was cruising to a maiden grand prix victory until a fuel injection problem dropped him to third, a gift Mercedes received with open arms. It would not be Ferrari’s only charitable act of 2019. But for occasional reliability problems, his qualifying accident in Baku and his team’s capacity for myopia – failing to realise that Verstappen was the real threat in Austria, for instance – Leclerc might well have forced Mercedes to fight longer and harder for its latest titles.

His was a hugely impressive campaign, yet there were signs of vintage Vettel: the pole laps in Japan and Canada (where most right-minded people consider he was wrongly stripped of victory, picking up a time penalty for blocking Hamilton when he was patently doing his utmost not to have an accident that might have taken out both of them), the stubborn refusal to adhere to team orders while leading in Russia... Leclerc is the future, but Vettel’s old spark endures. 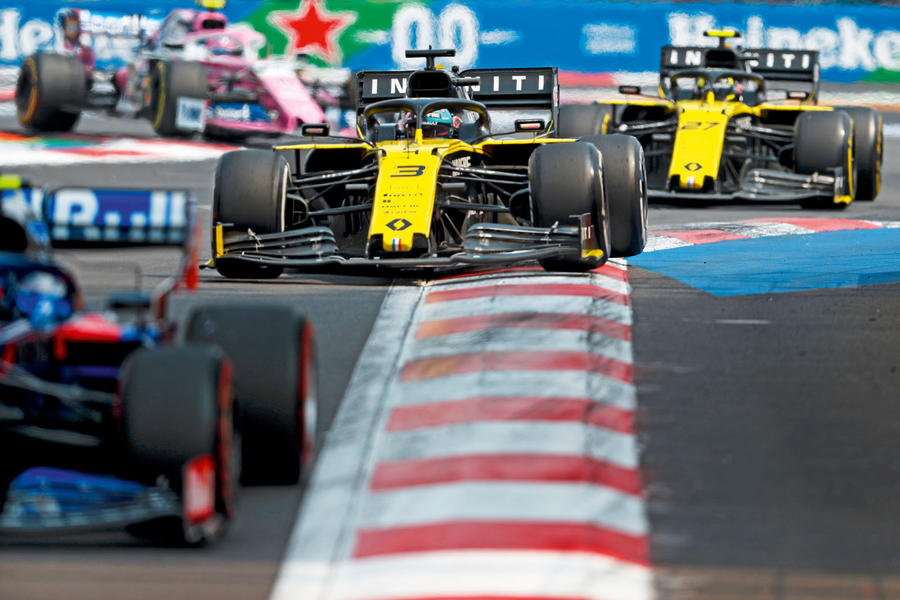 Nico Hulkenberg vs Daniel Ricciardo: Some thought Ricciardo had taken leave of his senses when he announced in 2018 that he was leaving Red Bull for Renault – and subsequent evidence has done little to alter opinion. Having spent several seasons struggling to keep up with customer team Red Bull, Renault has lately been struggling to keep up with customer team McLaren… Ricciardo, though, has been as strong as a Renault allows him to be – and in the process might have snuffed out the grand prix career of Hülkenberg, a driver whose impeccable junior track record (he was champion in every category he contested) has never translated into a truly competitive F1 seat. With Renault keen to secure the services of highly rated Mercedes reserve Esteban Ocon next year, only one driver was ever going to be shown the door… and at the time of writing, no others appear likely to open for him. 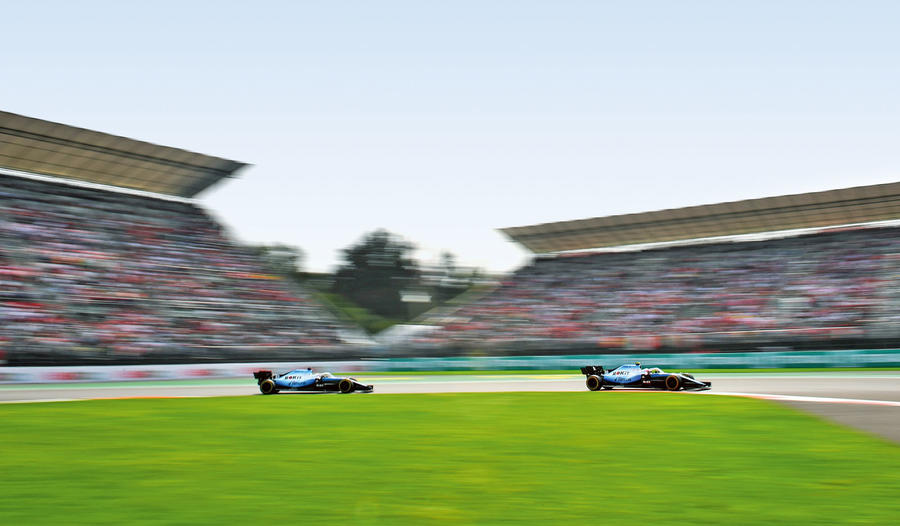 George Russell vs Robert Kubica: Hard to believe that this team was an F1 powerhouse of the 1980s and 1990s, or third in the world championship for constructors as recently as 2015. It was clear from the off that the FW42 chassis was fairly hopeless on a good day, so Kubica’s remarkable comeback to F1 – he’d been sidelined by a life-threatening rally accident ahead of the 2011 season – was never going to be a fairy tale.

Rookie Russell had Kubica’s measure for most of the season, but then the 21-year-old Englishman looks to be an exceptional talent, a cut above the merely very good. He was GP3 and F2 champion in the two seasons prior to graduation, taking seven victories to the highly rated Lando Norris’s one in 2018. It is to Kubica’s credit that he was sometimes quite close. 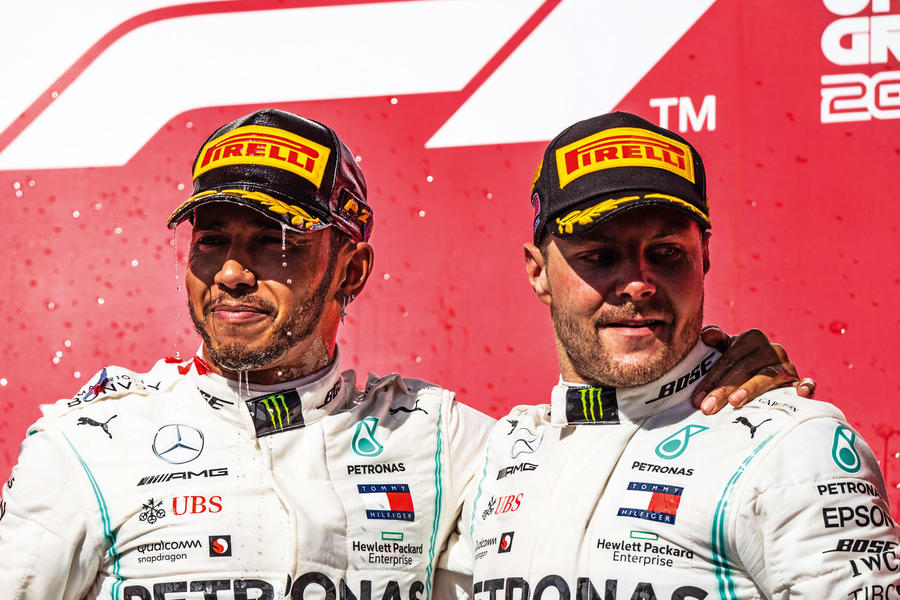 Carlos Sainz vs Lando Norris: One of the campaign’s feel-good stories. Red Bull persisted with Sainz for several seasons in junior categories, despite some patchy performances, then ditched him as he was maturing into a top-class grand prix driver at Toro Rosso. Go figure. Many of his drives for a resurgent McLaren have been exquisite (he’s particularly adept in changeable conditions) and he’s gelled with incoming team-mate Norris (2017 FIA F3 champion, F2 runner-up last year) in a way that is remarkable by F1 standards.

The two have become bosom buddies off the track and fierce rivals on it, without ever allowing the latter aspect to disrupt team harmony. It is just the tonic McLaren has needed after several seasons in the doldrums – and the confirmation that it will renew its engine partnership with Mercedes from 2021 adds further radiance to its prospects. The future might, indeed, be orange. 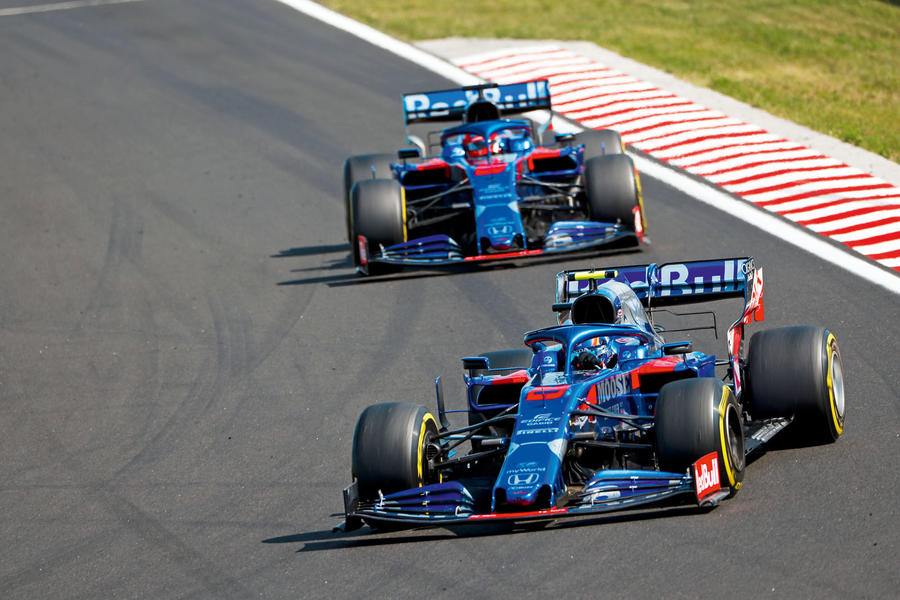 Daniil Kvyat vs Alexander Albon/Pierre Gasly: It is a measure of Red Bull’s sometimes brutal driver development programme that it had to call upon Kvyat and Albon – both of whom it had previously axed – to fill its two junior seats in 2019, simply because it had long since dispensed with other viable options. Kvyat’s wealth of experience made him solid from the start, but no more so than late-recruit Albon, who had precious little preparation time prior to Australia. That didn’t show – and he was sensational in the German GP, the first time he’d driven an F1 car in the wet, where he was denied a podium finish only by the late tyre gambles of others (one of them Kvyat). There was never much doubt about which driver Red Bull would promote to replace the ousted Gasly… who immediately looked his former self when he returned whence he came. No help to Kvyat, that. 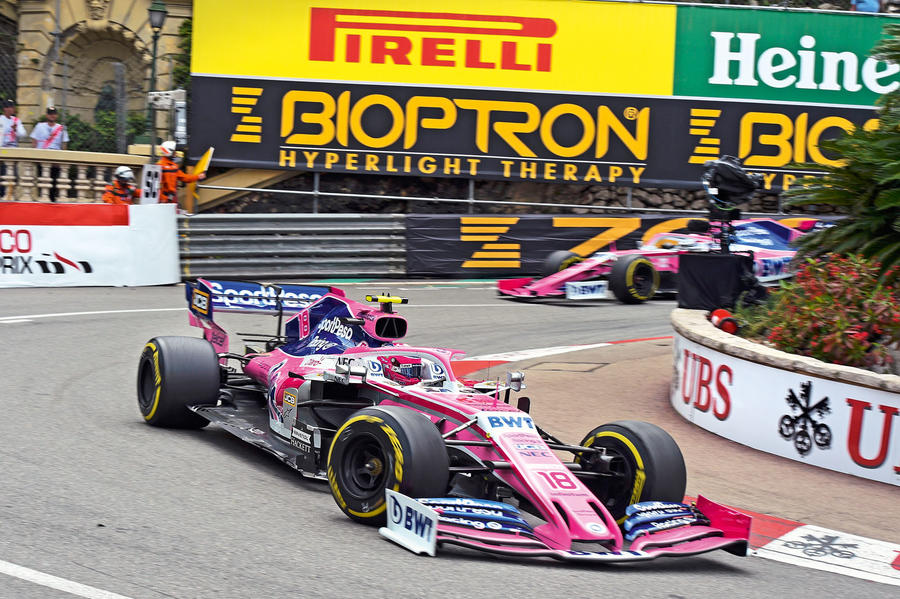 Sergio Perez vs Lance Stroll: Still a team in transition, following a transfer of ownership in 2018. Pérez has usually been the more reliable performer while Stroll, son of Racing Point co-owner Lawrence, failed to reach the second phase of qualifying for 14 consecutive grands prix before finally escaping in Germany.

Pérez flopped during his sole season with a top team (as McLaren was still perceived to be in 2013) but has always extracted the maximum from his time in the upper midfield and is one of the most reliable finishers/scorers in the business. Stroll has received a lot of flak because of his privileged upbringing – and he doesn’t have to fight too hard for his present berth – but money alone cannot buy you an FIA F3 title.

Neither of these two is a future world champion (and not just because their futures are entwined with Racing Point, to whom Pérez is contracted until the end of 2022), but both are solid racers. 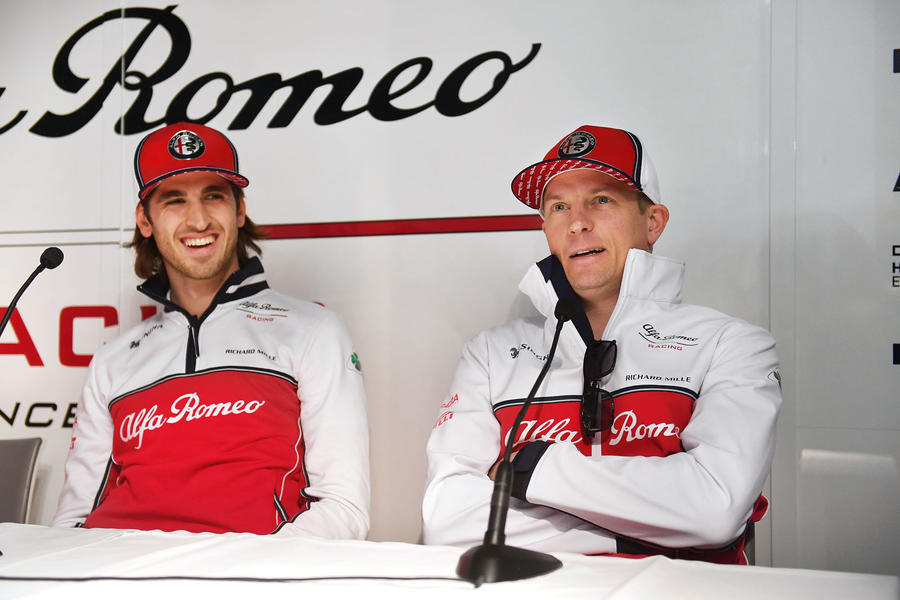 Kimi Raikkonen vs Antonio Giovinazzi: Many a driver has remained in F1 long past his sellby date, but the move from Ferrari initially seemed to rejuvenate Räikkönen (who turned 40 during the campaign). Consistency hasn’t always been his motif, but he’s a canny racer and provided a solid base for a team in the process of being built up under the astute leadership of Frédéric Vasseur.

Giovinazzi subbed twice for the team in 2018 – blending flair with a tendency to hit things – and got off to a slow start this season. He gradually found his feet, however, and in Austria scored his first point – also the first for any Italian since 2010. Strange, but true. Then again, Italian drivers (Nino Farina, Alberto Ascari) won three of the first four world championships, a feat no compatriot has yet equalled. On present form, there is little evidence to suggest Giovinazzi will end that drought. 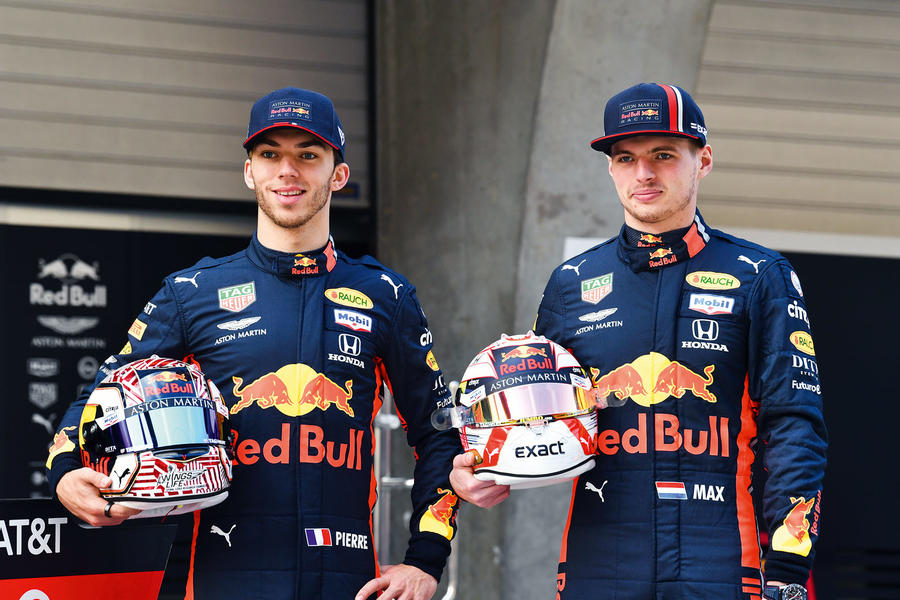 Max Verstappen vs Pierre Gasly/Alexander Albon: Of all this year’s parallel contests, Verstappen/Gasly was probably the most lopsided. Gasly is no mug – witness his GP2 conquest in 2016, his strong Super Formula title push the following season and fourth place on merit for Toro Rosso in the 2018 Bahrain GP – yet against the Dutchman (in his fifth full F1 season, despite turning 22 only in September) he looked bereft of speed, confidence and ideas. Sometimes, he finished a full lap behind him.

Despite Red Bull’s consistent “we’ll give him time” party line, he was dropped after the Hungarian GP and traded places with Toro Rosso rookie Albon. An uncomplicated soul with a nice line in car control, the 23-yearold Anglo-Thai appeared wholly unfazed by the challenge and needled Verstappen by matching him thousandth for thousandth during qualifying in Suzuka. He wasn’t quite at the Dutchman’s level during races, but he gave Red Bull the performance upgrade it had sought. 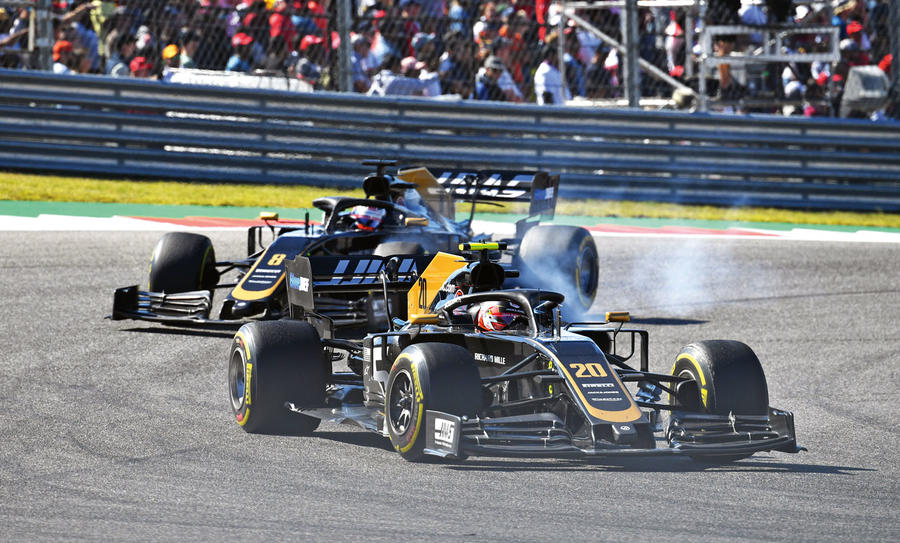 Kevin Magnussen vs Romain Grosjean: The fact that the pair of them have collided on several occasions underlines proximity of performance, but theirs has been a season riddled with complexity. Often the car has been quick in qualifying yet terrible in racing conditions, while sometimes it has been dreadful on Saturday – and remained so 24 hours later, no matter how many different comparative analyses the team has conducted. And then there was the comedic on-off-on-off summer dispute with former sponsor Rich Energy, manufacturer of a drink that you’ll struggle to find on any supermarket shelf. There has been one constant throughout this muddle: the elbows-out attitude of two of the most tenacious competitors of the modern age.

Lewis Hamilton vs Valtteri Bottas: Remember the hype at the campaign’s dawn? New, improved Bottas, slayer of world champions? He was indeed mighty in Melbourne, being pipped to pole by a sliver before disappearing over the horizon and leaving Hamilton more than 20 seconds in his wake. But that’s a hallmark of drivers who are too good simply to be dismissed as a dependable ‘number two’ yet don’t produce consistently conclusive evidence that they might be a future colossus.

In essence, he is a Ford Capri 2.0 GL who occasionally morphs into a 2.8i – a Gerhard Berger for the modern age, if you like. And, like the Austrian, he appears wholly apolitical and thus unlikely to trigger intra-team mischief. In that respect, he’s a perfect foil for the 95%-dependable Hamilton: quick enough to assist when necessary, but not sufficiently so to be a persistent nuisance. Except, perhaps, at Suzuka – one of the finest surviving barometers of driver ability – where he drove rings around his team-mate all weekend. For two hours that Sunday afternoon, he was a Capri 280 Brooklands.

Rumour mill says LeClerc has signed with Ferrari till 2024!, where does this leave Vettel? and Verstappen for that matter....?