BACK TO ALL NEWS
Currently reading: BTCC 2019: Turkington takes Donington double for BMW
UP NEXT
Bentley Bacalar concept: first drive of £1.5m roadster

Team BMW racer Turkington claimed his first BTCC pole position in more than two years. He went on to dominate the first race, keeping Ash Sutton (Subaru Levorg) at bay despite a number of safety car periods spoiling his chances to build a lead.

Several cars were heavily damaged in a major pile-up at the Old Hairpon on the opening lap, with the Pirtek Racing 330i M Sport of Andrew Jordan suffering the worst of the damage. Jordan was briefly hospitalised for checks, with his car too damaged to take any further part in the weekend.

Despite having to run success ballast, Turkington continued his domination in the second race, again puling clear as his rivals battled for position. Two safety car periods again prevented him from building a big lead, but the Northern Irishman kept controlling the restarts.

Notably, Turkington only won one race during his title-winning 2018 season, so has already doubled that tally after just six of 30 races in 2019.

Sutton initially held second again, but lost out late in the race to a charging Neal. The Honda man had earlier clashed with Oliphant, with the latter dropping down the order and later retiring after a separate incident. Tom Chilton finished fourth in his Ford Focus RS.

Team Toyota Speedworks driver Ingram slipped down to 10th in the second race, but was drawn on pole for the reverse-grid final race of the day. He used that to great effect, dominating the race to score his first victory in the new Corolla. Notably, around 4500 employees from Toyota’s nearby Burnaston plant were in attendance at the Derbyshire circuit. 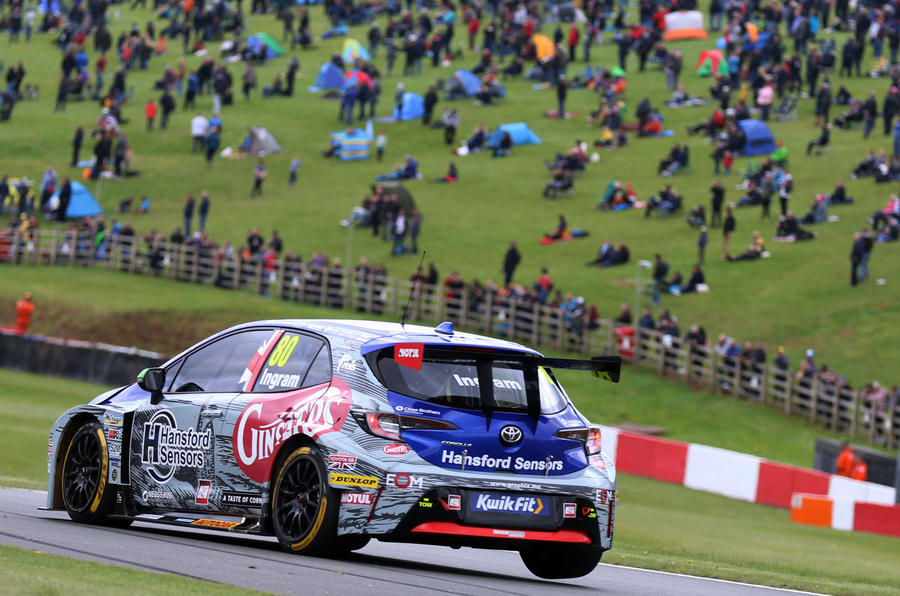 Sutton finished fifth, and now leads the standings with 70 points, three ahead of Cook. Turkington and Chilton are tied for third in the standings, with 65 points.

The next round is at Thruxton in Hampshire on 18/19 May.

BTCC 2019: why the championship is back to its best

Opinion: 2019 could be the BTCC's best year yet