BACK TO ALL NEWS
Currently reading: How rallying helps Skoda dealership sell more cars
UP NEXT
Lotus Emira vs Porsche 718 Cayman

Ever since Colin Chapman painted his Lotus Formula 1 cars in Gold Leaf colours, sponsorship has been an integral part of motor racing. But one man is taking it a step further, carving out a symbiotic relationship between his rally career and the day job of running a Skoda dealership.

As a result, Neil Simpson is basically living the dream: driving what is, to all intents and purposes, a factory rally car in the World Rally Championship (WRC) and being paid for the privilege (in a roundabout way).

The dealership that Simpson owns isn't just any Skoda dealer: it’s the only one in the world that owns a Skoda Fabia R5 Evo.

His latest-specification car used to be one of Skoda’s own. It’s run by the Toksport team based at the Nürburgring in Germany, which took over the running of Skoda’s factory cars after the works scaled down its direct involvement. Simpson reckons on having around five or six outings in it per year, ranging from WRC rallies to his local closed-road event.

So how does an ordinary businessman make it stack up? There are two main benefits. First, Simpson has found significant benefits in attracting and then retaining staff with the rally programme, as they all want to be a part of the story.

“If you look at the car industry as a whole, the very best people come from motorsport,” Simpson says. "They’re used to doing things quickly, better, more innovatively and under pressure. That’s the message we want to send out to everyone, and luckily it works.” 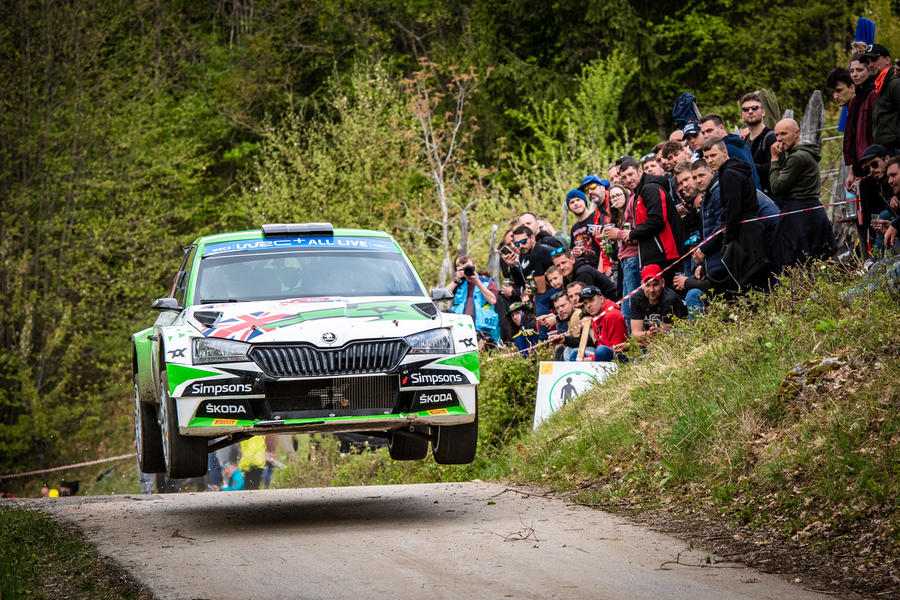 Second is the ‘win on Sunday, sell on Monday’ mantra. Simpson’s participation gives the opportunity to increase brand awareness for his business, which employs around 90 people. The numbers are hard to ignore: since he resumed his motorsport career in 2014, sales have increased by around 45%, while the company’s social-media following has grown from nothing to more than 400,000.

Extra sophistication and size comes to the no-nonsense supermini, but at what cost?

As much as Simpson loves the sport, though, the whole campaign is built on a robust business case that’s frequently subjected to outside scrutiny.

“I’m lucky to have a brilliant board of directors and financial team,” Simpson says. “They would tell me in no uncertain terms if there were no longer a case for the rally team. But instead, they’re the first people to see the benefits.”

The business case is undoubtedly helped by Simpson’s prowess as a rally driver. It’s nearly impossible to jump into one of these cars and be on the immediate pace, but he has an illustrious career behind him as a former factory driver for Volkswagen.

He might have had a professional career as a rally driver, but there was the family business to look after. It was founded by his grandfather, who started off selling Wartburgs (Simpson still has a Wartburg in his personal collection, along with a mint Mk1 Skoda Octavia vRS).

Aged 50, Simpson can still cut it with drivers who have much more seat time. But it’s not even about the results, he says: “It’s about making everyone feel good: myself, my amazing co-driver Mike Gibson, the whole family firm and the wider community of customers and friends who support us.

"Rallying can be a massive force for good – and we’ve shown that it’s definitely good for business, too.”

The history of the dealer rally team

Simpson has demonstrated how rallying can provide a genuine business boost for car dealers, but he’s far from the first person to come up with the idea. Here are a few more dealer rally teams that have taken on motorsport’s biggest challenge in the past…

David Sutton Cars was the only true private team to ever win the WRC (in 1981, with Ari Vatanen in a Ford Escort). The Kronos team did something similar in 2006 with Sébastien Loeb, but it had plenty of support from the Citroën factory. David Sutton himself died last year, but you can still buy a new road car from David Sutton Cars.

Renault Dealer Rallying was the team that fielded the Renault Clio Kit Car and Maxi Mégane in the British Rally Championship in the 1990s and early 2000s, taking Martin Rowe and Tapio Laukkanen to titles. The team was run by the Automeca squad from France on behalf of Renault UK, using some funding from the dealer network.

The Chequered Flag was a dealership that also went rallying – capitalising on the kudos of the fact that you could buy a road car out of a Chiswick showroom from the same company that went racing and rallying on the international stage. Initially known for Italian cars, its allegiance later changed. “We got tired of warranty claims for rusting Lancias, so we switched to Opel,” explains former boss Graham Warner. “General Motors then insisted we take on a Vauxhall franchise.” And that was the beginning of the end.

Jolly Club, founded in 1957, was one of the most famous Italian private teams, best known for its association with Lancia and for attracting Carlos Sainz to come and drive its Delta in 1993. It wasn’t a happy year, though: Sainz ended the season eighth, saying that it was the only occasion in which he let his heart rule his head. Jolly Club never sold road cars, but it had plenty of race car and rally car customers.

An honourable mention should be made of two-time world champion Miki Biasion. The Italian was a member of the Lancia factory team when he won his titles in 1988 and 1989, before going on to become a Lancia dealer in Milan after he retired, with his championship-winning Delta Integrale proudly displayed in the dealership.

Log in or register to post comments
Andrew1 26 May 2022
Funny this. It doesn't seem to work for Citroën, and they have decades of rallying experience.