BACK TO ALL NEWS
Currently reading: Goodwood Revival returns as stars come out to play
UP NEXT
2021 Mercedes-AMG S63 due imminently with snarling V8 hybrid

Goodwood Revival returns as stars come out to play

The Goodwood Revival blasted back in style last weekend after its pandemic-induced hiatus, as the best historic racers in the world once again took on a cast of famous names from the past and present to keep bumper crowds of 50,000 gripped on each of the three days.

Aston Martin Le Mans racer Darren Turner and Oliver Bryant claimed victory in the one-hour Royal Automobile Club TT Celebration on Sunday – even if their AC Cobra didn’t cross the line first. Former Porsche Le Mans winner Romain Dumas took that honour after a rousing battle with Bryant, only for the Cobra he shared with Bill Shepherd to be docked a time penalty for a driver-change infringement.

Shepherd made up for it by winning the second leg of the St Mary’s Trophy for 1950s saloons in his monstrous Ford Thunderbird, securing the overall aggregate victory after Dumas had led home Andrew Jordan’s plucky Austin A40 during the first race on Saturday. It turns out that size does matter after all. 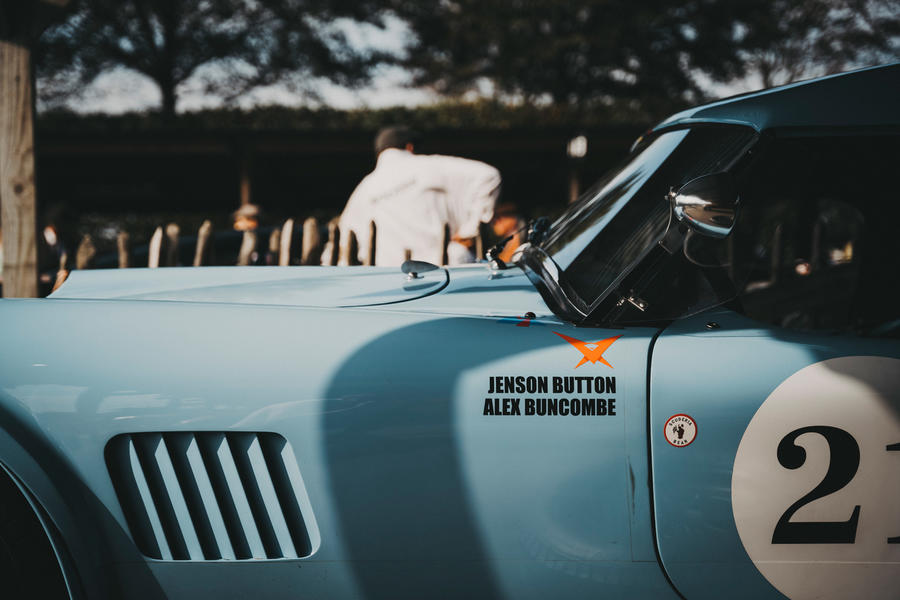 The pair switched to a Cobra for the TT on Sunday, Button fluffing his start from the front row when he went straight from first to fourth gear and plummeted down to ninth place. But he soon got the bit between his teeth and tore through the order, passing fellow Sky F1 pundit Martin Brundle along the way as he climbed back up the order. But during Buncombe’s stint a misfire set in, forcing the Cobra out of the race.

Brundle starred in the Moss memorial race for early 1960s GT, putting on one of the battles of the weekend in his terrific tussle with fellow E-Type racer Jon Minshaw. But Martin’s son Alex had a double fright when he took over from his dad. First, an engine failure led to him crashing on his own oil at Woodcote; then as he clambered on to the tyre wall, the E-Type driven by Calum Lockie succumbed to the oil too, hitting the barrier just metres away.

The damage led to a long safety car interruption, but in the E-Type’s 60th anniversary year, James Cottingham was a convincing winner, sharing his rapid car with Harvey Stanley. Cottingham was also a winner on Saturday, claiming the Sussex Trophy in his Tojeiro Jaguar from Sam Hancock’s Ferrari 246S Dino, the pair putting on a fine display of tail-out racing in their beautiful 1950s sports racers.

Away from the racing, the Revival was bigger than ever, thanks to expanded public areas inside the Lavant Straight and at the first corner, Madgwick, which was linked to the perimeter by a new pedestrian bridge. It still felt packed in the paddock, and although the expansion eased some of the pressure, social distancing and face masks suddenly seemed like a distant memory as the crowds soaked up a wide range of entertaining new features.

The circuit parades created some memorable moments, as always. A gathering of blaring BRMs celebrated the 70th anniversary of the marque's first grand prix entry, but it was the tribute to Sir Stirling Moss that brought a tear to many an eye.

At the first Revival held since his death, a stunning collection of Moss-related cars took to the Motor Circuit, and on Saturday probably the greatest of them all took the lead. The Mercedes-Benz 300 SLR #722, in which Moss and co-driver Denis Jenkinson conquered the 1955 Mille Miglia, made its final ever running appearance at a race track before it's retired for good to the marque’s Stuttgart museum.

As Sir Jackie Stewart and Damon Hill joined Stirling’s son Elliot on the grid, his widow Lady Susie took to the passenger seat for an emotional farewell to a wonderful car and an even more wonderful racing driver. A Goodwood moment never to be forgotten.