BACK TO ALL NEWS
Currently reading: VW Group rules out F1 entry due to ownership and rules uncertainty
UP NEXT
Audi A9 E-tron: electric luxury saloon due in 2024

The VW Group will not enter Formula 1 while the ownership of the sport and the technical regulations remain in turmoil, according to the group's motorsport boss, Wolfgang Dürheimer.

"Formula 1 is not on our agenda right now," said Dürheimer. "The situation is not predictable enough to make the kind of investment required.

"On the regulations front, there are a lot of rumours around the engine side and the supporting technology side. Before you commit the kind of money needed you must see five years of rules stability - there can't be the possibility of rules changes, of more or less engine cylinders coming in, or the hybrid system changing away from technology you are developing on road cars.

"On the ownership side, there are also big questions the sport must answer. If you are a big business making a big investment you expect to have some influence on the set-up, with an assurance the present ownership will last. In F1, it seems the owners will not be there forever and that creates some instability."

The controlling shareholder in Formula 1, CVC Capital Partners, has indicated it could sell the sport in recent months, with F1 chief executive Bernie Ecclestone understood to be pushing for a change of ownership. Speaking to the Daily Mail newspaper this week, Ecclestone said: "Formula One is the worst it has ever been. I wouldn't spend my money to take my family to watch a race. No way."

Last year, Audi was strongly linked to an F1 deal with Red Bull from 2017, but the partnership is strongly rumoured to have been derailed by the VW emissions scandal.

Durheimer added, however, that racing in the World Endurance Championship (WEC) costs more than running an F1 team for Audi and Porsche. "The technology is greater than that in F1 and the levels of investment are therefore greater," he said. When asked if that was sustainable, he added: "Probably not, but the series is in good shape. I expect that, in time, LMP1 cars will have less complex content, bringing the price down and attracting more manufacturers. But, for now, the regulations are where the competitors want them."

Watch Autocar drive the Le Mans-winning Bentley Speed 8 in the video below. 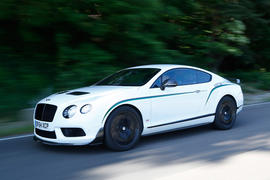 With 572bhp, a top speed of 170mph, the GT3-R is a glorious tribute to Bentley's return to racing

Right now, VW has more serious things to worry about

24 February 2016
Plus Durheimer is right about the sport's ownership and rules uncertainty. The constant fiddling with the regulations, such as those proposed today, only serves to confuse the fans and penalise the teams at the back of the grid. VW needs to restore customer confidence, not mess around with racing cars.

24 February 2016
Can't it just write some software to get round the regulations?

How are those advertising revenues holding up, Autocar?

Straight from the VW press release...