From £46,3508
Audi’s blistering RS3 gets a raft of changes for 2017. More power, a reworked chassis and more equipment are among the revisions
Open gallery
Close

As a versatile hot hatch, the Audi RS3 has always been close to top of the podium. If you want a quick, luxurious and secure all-weather machine that offers decent levels of practicality and reasonable running costs, it’s hard to ignore Ingolstadt’s junior performance car. And yet, we’ve always struggled to gel with the five-cylinder ‘pocket rocket’. Partly because of its prodigious price tag, and partly because it places unflappable performance ahead of flamboyant fun.

However, as demonstrated by the surprisingly playful TT RS, it would appear that Audi Sport division – formerly Audi Quattro GmbH – is not completely averse to producing cars with a sense of humour. Therefore, for 2017, special attention has been paid to the RS3’s historically straight-laced dynamics. Firmer RS Sport suspension featuring adaptive damper control promises flatter cornering, widened front and rear tracks (20mm - 14mm respectively) should help to limit joy-sapping understeer, and new ESC software even allows for some “controlled drifting” - or so they tell us.

That said, despite the rather extensive chassis alternations, the star of the show still resides somewhere up front. Billed as the world’s most powerful series production five-cylinder engine, the 2.5-litre turbocharged five-cylinder is a lighter, more efficient version of the TT RS’s spectacular motor. Exchanging a steel crankcase for a lighter but stiffer aluminium unit accounts for most of the weight saving, while a new dual injection process, patented valve lift system and a freer flowing exhaust help unleash a few more horses. 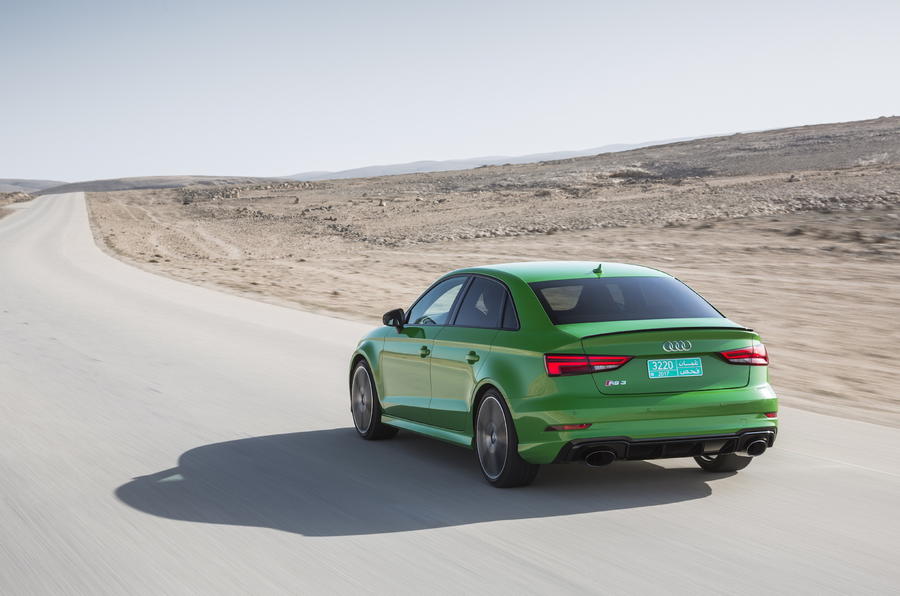 With peak power now rated at a truly barmy 394bhp, this ‘mid-level’ RS is now more than half a second quicker to 62mph than the original Audi R8. And unlike that car, you’ll be able to produce the same results time and again, thanks to Audi’s seven-speed double clutch S-Tronic gearbox; although we did find the same ‘box a tad ‘stodgy’ in the TT RS.

However, more obvious than these mechanical changes is the RS3’s new appendage; aka its tacked on rear boot. That’s right, for the first time ever, Audi is offering its hyper hatch in saloon form in an effort to generate extra sales in the increasingly important but hatchback-phobic US and Chinese markets. In fact, Audi reckons it will sell more of these saloons in the States and in Asia than in Europe, though we’ll still be able to buy it in the UK.

Now granted, the idea of an uber expensive compact performance saloon might not be everyone’s cup of tea, but to our eyes at least that sleek body looks great, and combined with the enlarged air intakes, flared arches and lower roofline, it’s hard not to get excited at the prospect of a mini super saloon. In fact, with a larger wheelbase than a B5 RS4, this could be the ideal all-weather machine for UK roads.

To spend time in, the interior is a triumph. The predominantly black cabin is an exercise in restraint, but there are enough touches to indicate that you are indeed sitting in an RS model. The traditional flat-bottomed steering wheel is present and correct, embossed RS logos on the cross-stitched leather seats add a touch of class, and in line with the rest of the facelifted A3 line-up, the interior of the RS3 can be enhanced with Audi’s virtual cockpit display.

However, small details aside, there’s only one feature in the cabin that truly matters - the bright red starter button. Thumb it and the five-cylinder motor barks into life with an intensity that betrays its compact size. Driving around town that iconic offbeat firing sequence sounds truly superb, although we were a touch surprised by a distinct lack of pops and crackles on the overrun – perhaps Audi has grown tired of artificial sonic enhancements?

Regardless, with 354lb ft from 1700rpm, the RS3 is seriously quick off the line. The 4.1sec to 62mph sprint feels entirely believable from behind the wheel, with the Quattro all-wheel drive system ensuring effectively no loss of traction. Combined with a quick shifting dual-clutch transmission (in manual mode), there are very few road cars that are capable of delivering the same levels of effortless performance. 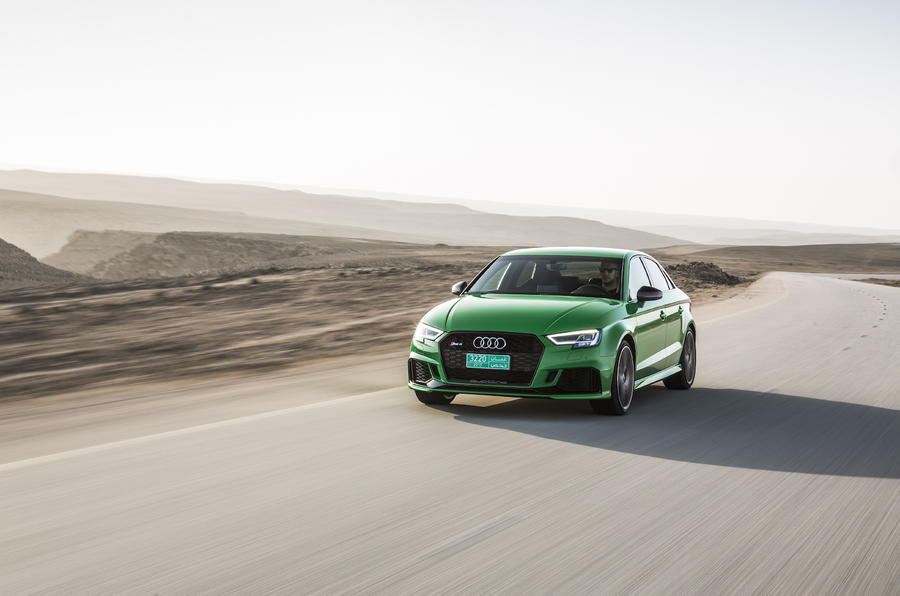 And yet, once up and running, the RS3 never quite delivers the same kind of top end rush that’d you expect from a near 400bhp sports saloon. This is partly down to the engine’s flat torque curve, but it is also hampered by a gearbox that feels rather hesitant when left to its own devices. It’s a combination that is most noticeable on the exit of slower hairpin corners - when you expect to accelerate out on a wave of torque, you instead have to wait for the boost to build before you are able to drive cleanly off the corner.

To its credit, the new engine does benefit the RS3, albeit passively, when the roads get twisty. With a wider track, a revised ESP system and most importantly, less weight over the nose, the car turns in more sharply than the car it replaces. Where the old model would slip into understeer mid-corner, the new car digs in and drives through in a more accurate manner. And on the tight and twisting switchback roads that snake their way up and down the Dhofar Mountains, it was easy to play with the RS3’s newfound balance. Lifting off on entry now allows you to dictate your angle of attack, with the rear axle helping to point the car at the apex; it’s a joyous feeling when you get it right.

Of course, once you get on the power, the supposedly ‘playful’ Quattro all-wheel drive system pulls everything back into line, despite it being theoretically capable of dispensing 100 percent of its available power to the rear wheels. That said, there is no question that this is a genuinely talented car, and one that is surprisingly engaging on the right road. 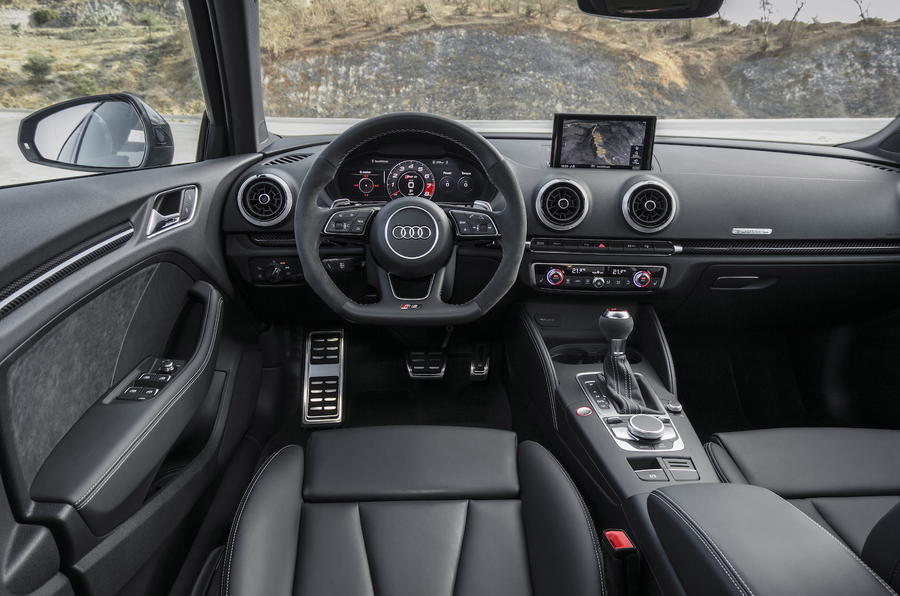 Ultimately, we’ll have to get the car back in Blighty before we give our definitive verdict. The hot and dusty roads of Oman are not exactly comparable to the UK, although the low grip surface did give us a unique insight into the RS3’s abilities up to and over the limit. Abilities that bring the RS3 closer to rivals such as the Volkswagen Golf R and BMW M140i.

And yet, this is still a car that is objectively hard to recommend, especially when you take in the comparative costs. Official figures have yet to be announced, but insiders reckon that that this Saloon could cost as much as £47,000 – a mighty amount of money, considering that the outgoing Sportback started at less than £40k.

Factor in the best part of £6k for carbon ceramics brakes and the optional adaptive dampers, and you’re looking at an ‘entry-level’ RS model that’s not far off the cost of a BMW M4. Will that be enough to put the public off buying one? Of course not. But, if we had the choice, we’d opt for another compact saloon that does pretty much everything that the Audi does, only for far less money: the Mercedes-AMG CLA 45.

Going green in a good way

That's a stunning colour which really suits the car, though I'd still prefer the hatchback, or even better a proper estate version.
Jimbbobw1977 17 March 2017

Stil.. it's £47k estimate price for a car that has the same chassis as a 1.0 £16k Skoda Octavia... It's a hell of a lot of money for that car that isn't really going to be all that useful on U.K. Roads. Plenty of other cars I would rather spend that money on than an A3 Saloon
xxxx 17 March 2017

Obviously I meant V8 R8, but

Obviously I meant V8 R8, but as so many people on here complain, we have lost the ability to edit and correct our posts. (New paragraph) Or insert paragraphs. (New paragraph) In fact it is ridiculous how little of the page is occupied by text rather than adverts and blank borders. (New paragraph) And nothing ever happens about it...
View all comments (16)