BACK TO ALL NEWS
Currently reading: New Seat Taracco: UK prices announced for seven-seat SUV
UP NEXT
Out of character cars: Nissan Nismo GT-R vs Toyota GR Yaris vs Alpine A110

Seat has announced pricing and spec details for its Tarraco seven-seat SUV, which is available to order now.

Priced from £28,320 in SE spec for the 148bhp 1.5-litre TSI petrol engine, the base Taracco comes with metallic paint, 17-inch alloys, a DAB radio, Seat's Full Link connectivity system and three-zone climate control as standard. Unlike its Skoda Kodiaq sibling, only seven-seat variants are available in Britain.

The new SUV was unveiled by Seat earlier this year in Tarragona, the modern version of the city that used to be called Tarraco. Positioned as the firm’s new flagship, the Tarraco completes its trio of SUVs alongside the Ateca and Arona. 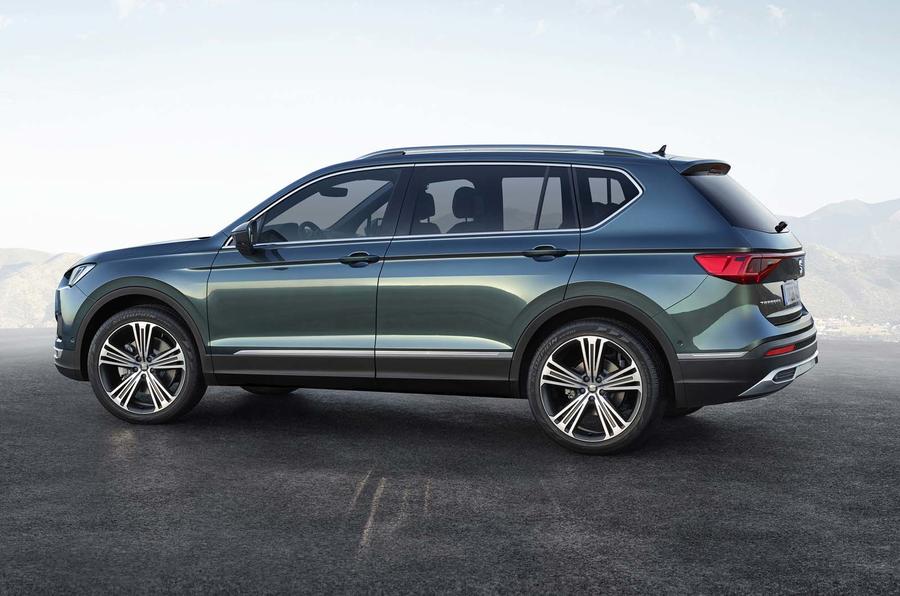 "The introduction of the Tarraco forms part of our €3.3 billion [£2.93 billion] investment between 2015 and 2019 in the company’s future and the range of vehicles we offer," said Seat boss Luca de Meo. "It completes our family of SUVs, to suit every customer’s need”.

Seat believes that the Tarraco can help it attract new customers and will considerably boost the firm's profits due to the greater margins possible with a larger SUV. De Meo said the Tarraco would help Seat fight in the market for "the main family car in the household."

The Tarraco is built on the Volkswagen Group’s MQB-A long-wheelbase platform, which is also used for the VW Tiguan and Skoda Kodiaq. Sven Schawe, Seat’s chassis development boss, told Autocar that much of the development focus of the car was tuning the VW Group technology – in particular the Tarraco’s Dynamic Chassis Control (DCC) systems – to offer a more involving driving experience.

“We used the same philosophy as the Ateca: using the latest technology on a proven VW Group platform and trying to offer one step more to the customer,” said Schawe. “We tried to give the Tarraco the Seat character in terms of driving dynamics, reducing the weight you feel when driving it. It fits into the family DNA.”

The Tarraco will be launched with four direct injection turbocharged engines: two petrol and two diesel. The entry-level petrol is a four-cylinder 1.5-litre TSI unit with a six-speed manual gearbox and front- wheel drive. The high-spec 187bhp 2.0-litre petrol comes with a seven-speed automatic and four-wheel drive. Both diesels are 2.0-litre TDIs. 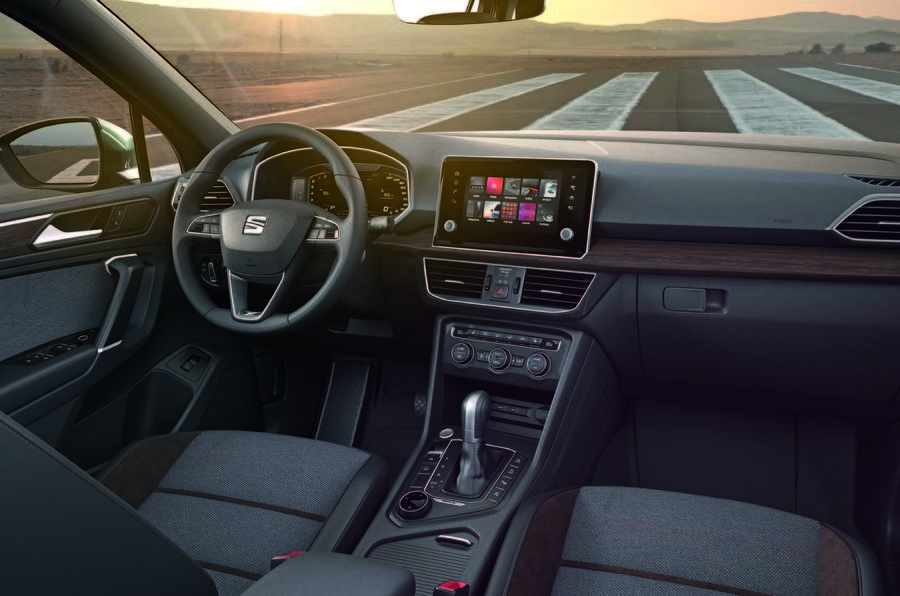 Seat has confirmed that a plug-in hybrid version will be launched within the next two years. That model will offer a total powertrain performance of 207bhp and 295lb ft of torque, with an electric-only range of 31 miles and a CO2 output of less than 50g/km.

The DCC system provides a variety of drive modes, including one that automatically adjusts to conditions, while the Tarraco runs on MacPherson front struts and multi-link rear suspension.

While the Tarraco completes Seat’s SUV line-up, design boss Alejandro Mesonero said it “gives you a hint” of the firm’s future design direction. The Tarraco features a redesigned front grille, and a revamped version of Seat’s triangular LED headlights and narrow rear LED lights, standard on Xcellence and Style trims. Mesonero added the Tarraco was designed to "give a strong first impression."

The interior design has also been revamped, with a new dashboard style based around a horizontal line effect designed to emphasise the Tarraco's width. It also features 10.25in Digital Cockpit and an optional 8.0in infotainment screen, which has been positioned to give a 'floating' effect. The Tarraco is also the first Seat to feature gesture control technology. The interior also features LED lighting.

The Tarraco will launch with two trim options, although the exact specifications of these are yet to be set for the UK market. A sportier FR model will follow.

The Tarraco is 4735mm long and 1658mm tall and will be available with either five or seven seats. It has a wheelbase of 2.8 metres, with a luggage capacity of up to 760 litres (in five-seat form), which increases to 2000 litres with the rear seats down. It will be built at VW’s Wolfsburg factory. Prices have yet to be disclosed but are expected to start from around £25,000.

De Meo said the Tarraco would help Seat's globalisation due to its appeal in markets "from South America to China". The Volkswagen Group has recently agreed a joint venture in China with JAC in which Seat will be the lead brand. 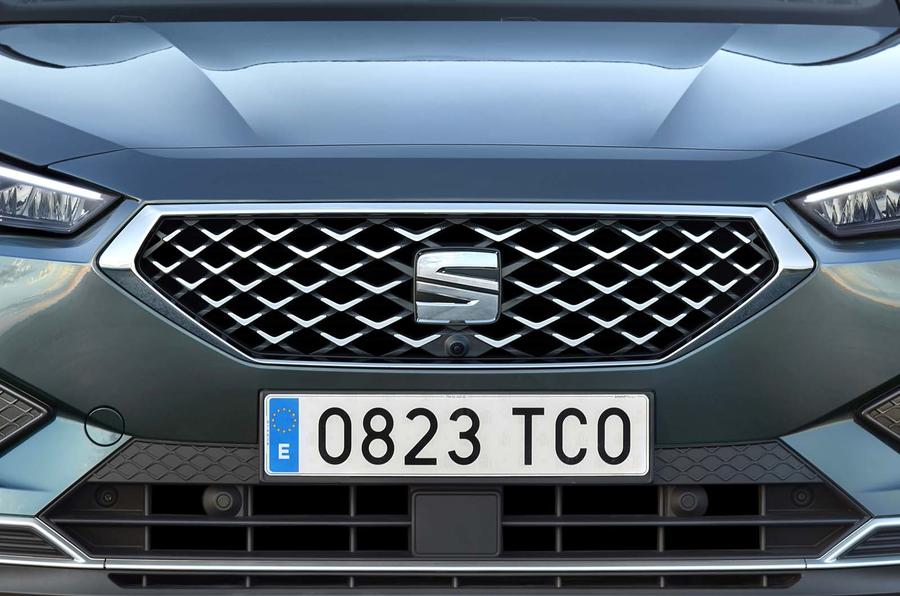 How important is the Tarraco to Seat?

“Very. It’s our biggest car, the first time we’ve entered the large SUV segment and our new flagship. With the Alhambra [MPV], we now have two options for people with bigger families.”

What were the key development areas?

“We have access to great technology from the VW Group. With the Dynamic Chassis Control system, we focused on software optimisation, to change the character by adjusting the steering settings, suspension and other elements to give it a true Seat feeling.”

As an SUV, how important was making the Tarraco perform off road?

“The idea was to build a versatile car. This is not only a car that looks like an SUV: it really can cope with really heavy off-duty terrain.”

Is that wood trim (fake/real) on the dash?

(hope this is the right spelling)

Side view sirhoutte is total VW!

The Side View is total VW!! Read somewhere that it's made side by side in the same VW factory.