BACK TO ALL NEWS
Currently reading: 2017 Honda Civic confirmed for Paris motor show
UP NEXT
2023 Polestar 4 will be affordable, mid-sized SUV-coupe

The European-spec 2017 Honda Civic will make its world debut at the Paris motor show later this month, and the car maker has released a new teaser image (shown below) ahead of the reveal.

The image, shown as the third picture in our gallery, shows the rear light cluster of a European model. It suggests that Euro cars will look near enough identical to US-spec models.

Honda has now revealed the 2017 Civic in production guise. Click here to view it.

The US models were revealed in full last month as early customer cars departed Southampton for the US. They're shown in the gallery above.

All five-door Civics will be built at Honda UK’s Swindon plant, which is the global production hub for the new model. It has received £200 million worth of investment to cater for the additional supply, with an anticipated 50% of future demand coming from Europe.

Swindon is also likely to produce a large number of the future Civic Tourer and Type R models, although the reveal of these versions is still some way off. 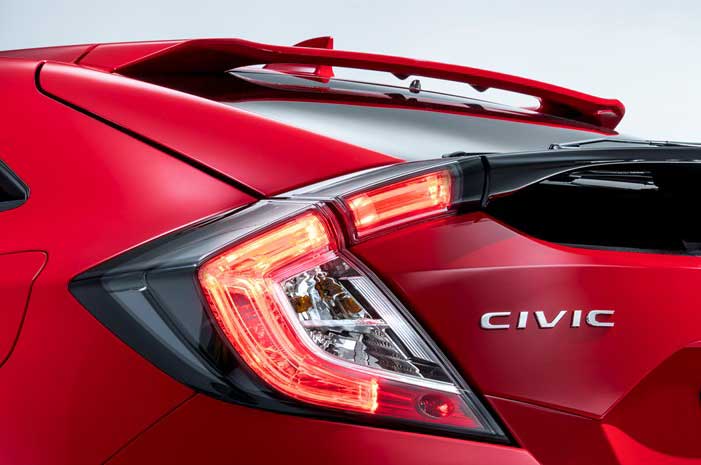 A four-door saloon version of the Civic was launched in the US late last year, but that model won’t be offered in the UK.

US-spec five-door Civics will be sold exclusively with a turbocharged 1.5-litre four-cylinder petrol engine offering as much as 180bhp in its most potent form. The UK engine line-up is expected to be more comprehensive, with a 1.0-litre, 1.4-litre and the 1.5 all potential petrol-powered candidates.

Honda UK boss Philip Crossman has also hinted that a hybrid version will be offered. Speaking to Autocar earlier this year, he said: “We’ll come back with a class-leading hybrid powertrain in the next five years, and it’s likely to make as much impact as the VTEC valve system.”

The range-topping Type R model is likely to be fitted with a turbocharged 2.0-litre engine like the current model, but power output will be ramped up beyond 306bhp.

US sales for the five-door model will start in September. Production for British models will start later this year, with order books opening in the first quarter of 2017.

The shot of the white car driving up the ramp to the boat is very reminiscent of the 1997-2000 Toyota Corolla liftback. It looks as if they started with a picture of that car and then unimproved it to end up with the horror they have.

It's really not an attractive car, and the best I can say about it is that the the rear side windows, while less than ideal, aren't as small as many of recent years. Overall, though, it is even worse looking than the Astra and nearly as awful as the Focus.

Honda's reputation for bulletproof reliability and excellent customer service will be hard pushed to overcome the odds if the versions for our market don't receive considerable changes to their appearance from these American market ones.

As Honda designs have descended into ever greater confusion, black plastic and ghastly addenda, it seems they have finally outdone themselves in hideousness. Who do they honestly think is going to willingly part with money for this ugly lump? They may be good at engines, but they are hopeless at body design!
Will86 16 August 2016

The basic shape at the front is good, but as others have said, the bumper detailing is fussy. However it's the rear 3/4 angle that looks worse, really not keen on that kink in the window line on the back doors. The much bigger problem though is rear 3/4 vision. I have a 2014 Civic and contrary to most reports, the rear spoiler across the back window really isn't a problem, the terrible rear 3/4 vision is and this new model looks even worse. Fingers crossed that the interior and drive are as good as reported by most US commentators.
View all comments (22)