BACK TO ALL NEWS
Currently reading: New Mercedes-Benz GLS: UK pricing and spec revealed
UP NEXT
Dacia bosses "fighting tooth and nail" to bring Spring EV to UK

The new Mercedes GLS luxury SUV is now available to order in the UK, costing from £73,995.

Revealed at the New York motor show, the Mercedes GLS has been completely re-engineered in an attempt to improve on the refinement and efficiency of rivals such as the new BMW X7 and Range Rover.

In the UK, the car will initially only be offered in GLS 400d trim, featuring the range-topping 2.9-litre inline six-cylinder diesel engine, with 325bhp and 516lb ft of torque. Official (WLTP) fuel economy and CO2 emissions are 37.2mpg and 201g/km.

Following the standard seven-seater, an uber-luxurious Maybach version will arrive, aimed directly at the Bentley Bentayga. 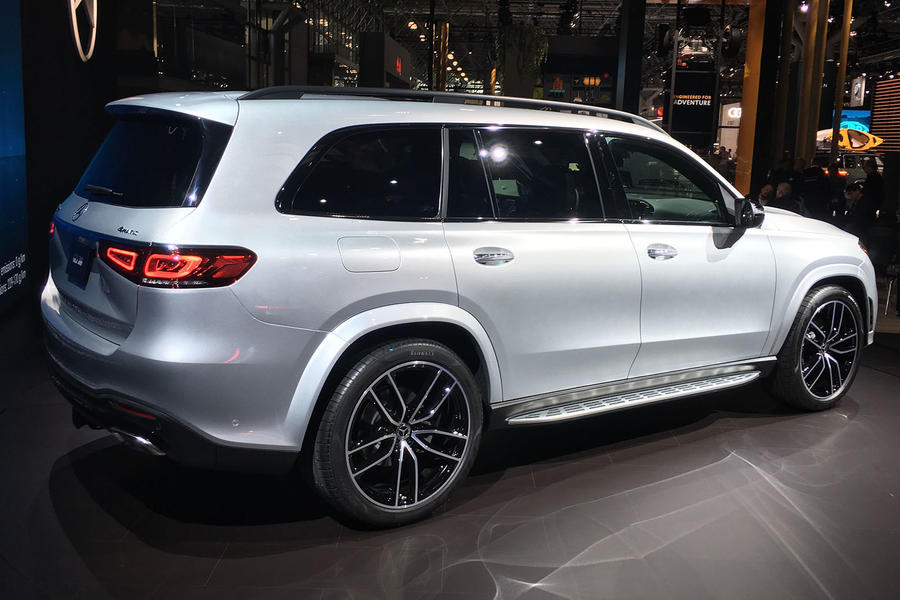 Styled along similar lines to the new Mercedes GLE, alongside which it will be produced at Mercedes' plant in Alabama, US, the new GLS is of an evolutionary appearance, retaining its prdecessor's upright stance but omitting its prominent sharp lines.

Aerodynamic refinements are said to yield a drag coefficient of 0.32Cd, along with “dramatically reduced wind noise at speed”, according to design boss Gorden Wagener. This compares with the previous GLS’s 0.35Cd.

The GLS's interior has also been thoroughly redesigned. Like the new GLE, it features a 12.3in digital instrument display, a 12.3in infotainment screen, touchpads within the upper spokes of the steering wheel and a touchpad on the centre console in place of the old rotary controller. Mercedes' MBUX interface supports touchscreen control as well as a voice control in conjunction with the Mercedes Me smartphone app. 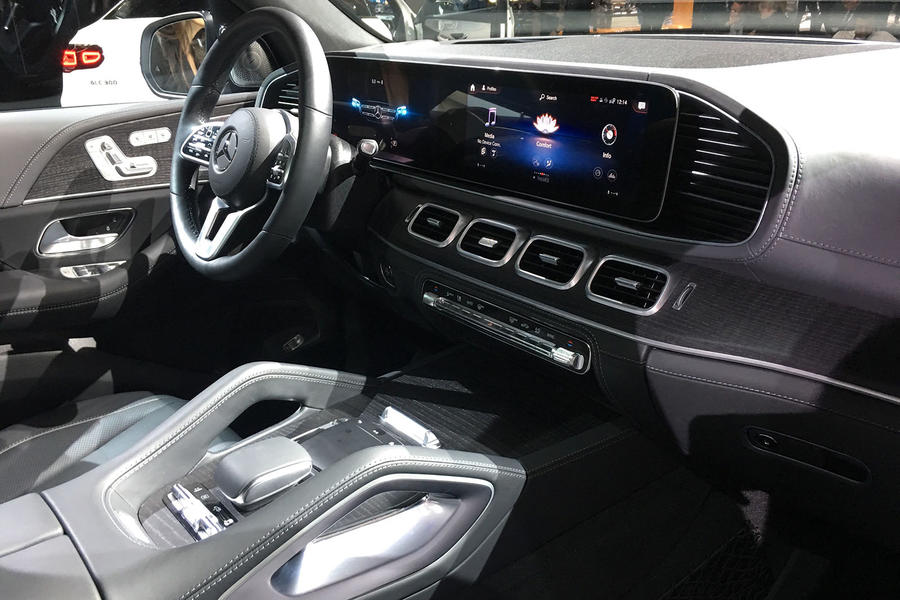 The GLS also comes with Mercedes' latest driver assistance systems, including Active Tailback Assist, which recognises tailbacks via real-time traffic updates and reduces speed to 60mph as a precaution. Once in the tailback, the car can autonomously stay within its lane and maintain a safe distance to the vehicle ahead at speeds up to 37mph.

The new GLS is said to be considerably more spacious than its predecessor, which saw close to 800 units sold in the UK last year, making up around 1% of Mercedes' total sales. The wheelbase has increased by 60mm to 3135mm, giving second-row passengers up to 87mm more leg room, while the third row is also roomier than before. All seven seats are electronically adjustable, and the rearmost pair fold away to leave a flat extended boot floor.

Nominal luggage capacity has yet to be revealed, but Mercedes says the maximum load space is up to 2400 litres. 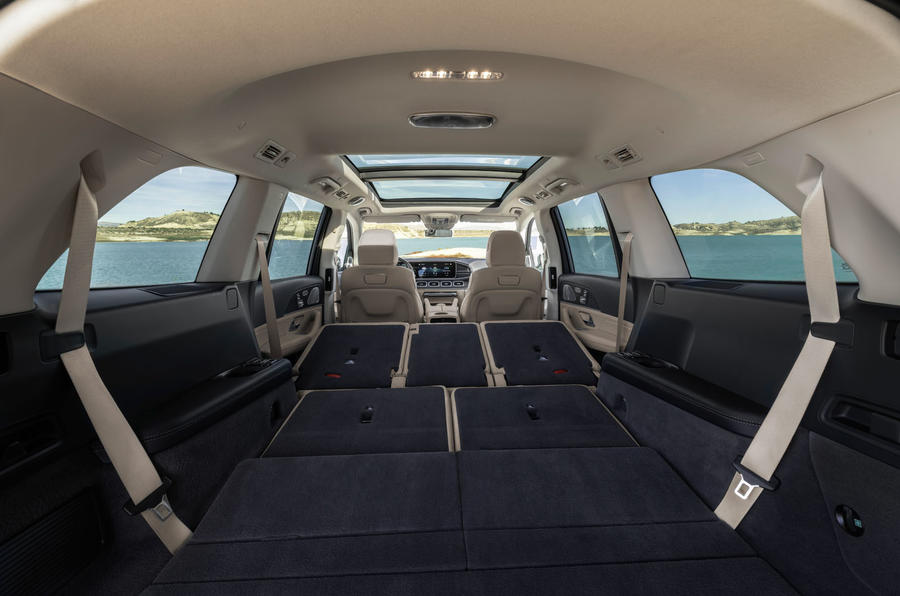 The new GLS is will be produced with four engines - two petrols and two diesels - from the outset.

Outside of the UK, a lower-tuned version of this engine will be offered in the GLS 350d, making 282bhp and 442lb ft.

Both of these models use a 31.6-litre AdBlue tank and a secondary ammonia filter, enabling them to comply with 6d-Temp regulations on the Real Driving Emissions Stage 2 test, which will become mandatory from 1 January 2020. 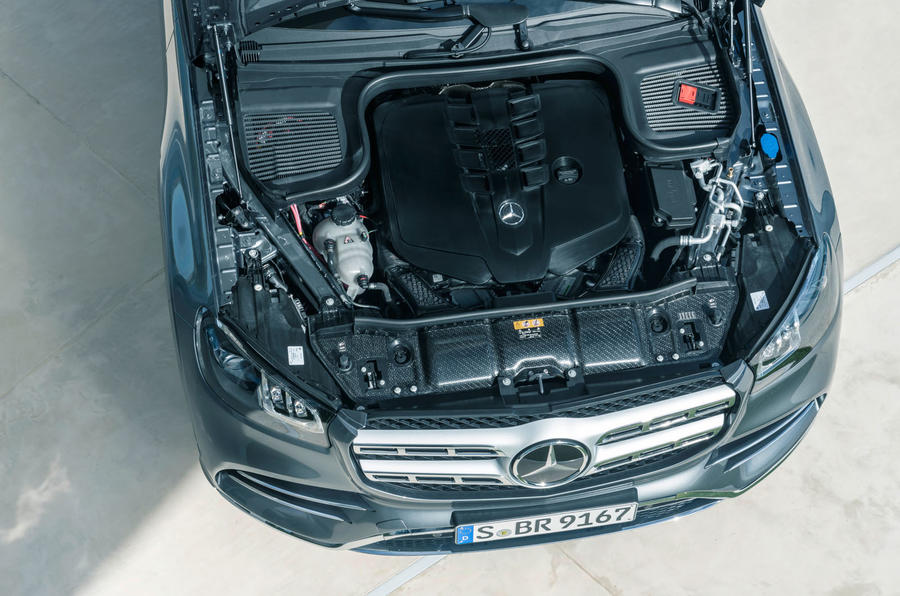 The petrol line-up is headed by a new 48V mild-hybrid engine in the range-topping GLS 580. This combines Mercedes-Benz’s twin-turbocharged 4.0-litre V8 with an electric integrated starter motor, delivering 482bhp and 516lb ft of torque, with a further 22bhp and 147lb ft for available for a brief period under acceleration.

The GLS 450 is also a 48V mild hybrid, using a turbocharged 3.0-litre inline six-cylinder engine and an integrated starter motor for 362bhp and 369lb ft, with an additional 22bhp and 184lb ft available under acceleration. 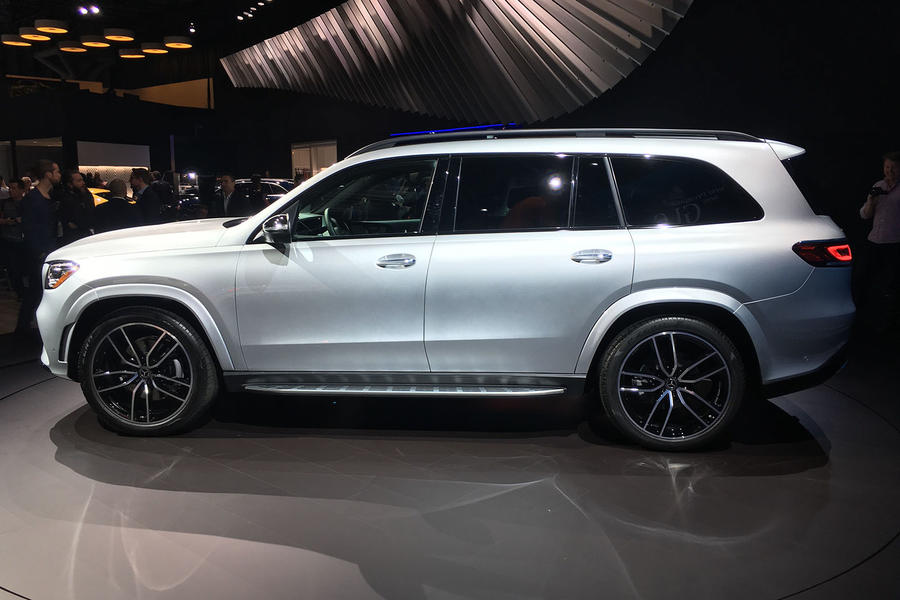 According to Mercedes, the 400d's engine is "perfectly suited to the vehicle’s size and weight, and the performance expectations of our customers".

All engines are combined with a nine-speed torque converter automatic gearbox and the latest version of Mercedes' 4Matic four-wheel-drive system, which provides fully variable apportioning of power between the front and rear axles.

Two AMG performance versions of the new GLS will arrive in 2020, with the GLS 53 using a mild-hybrid petrol engine and the GLS 63 a twin-turbocharged 4.0-litre petrol V8.

Mercedes is also preparing to offer the SUV with an updated version of the petrol-electric plug-in hybrid powertrain used by the S560e with a significantly greater electric-only driving range.

A look only a mother could love

Wow, this and the X7 have both been relentlessly beaten with the ugly stick.

It isn't pretty, I'll concede. But it is purposeful in a big SUV kind of way. I'm sure it will sell very nicely because, like it or not, it is what people want to buy.

Why no 48V hybrid diesels ?

Why no 48V hybrid diesels ?

Quite a bit of real estate...., not sure if European Roads are suitable, I kidding!, it’ll sell it’s a Merc.