Largest Mercedes SUV will rival the BMW X7; has been seen with minimal disguise prior to its unveiling
Open gallery
Close
Share story

Mercedes-Benz will unveil the new version of its largest SUV, the GLS, at next week's New York motor show, and prototypes have now been seen with minimal camouflage.

According to US media reports, the model will be shown two days after the unveiling of the GLB, which is destined for the Shanghai show.

The second-generation GLS sits on Mercedes' latest Modular High Architecture (MHA) platform, shared with the smaller GLE, giving it a similar footprint to the new BMW X7. This provides a significant reduction in kerb weight over the old GLS, the capability to support a 48V electrical architecture and the very latest in radar, camera and sensor-supported driving functions.

Like the outgoing GLS, the new model will share many parts with the S-Class luxury saloon, including its powertrains. The S-Class has six-cylinder and eight-cylinder turbo petrol engines, a six-cylinder diesel and a petrol-electric plug-in hybrid, so expect a similar line-up for the GLS. 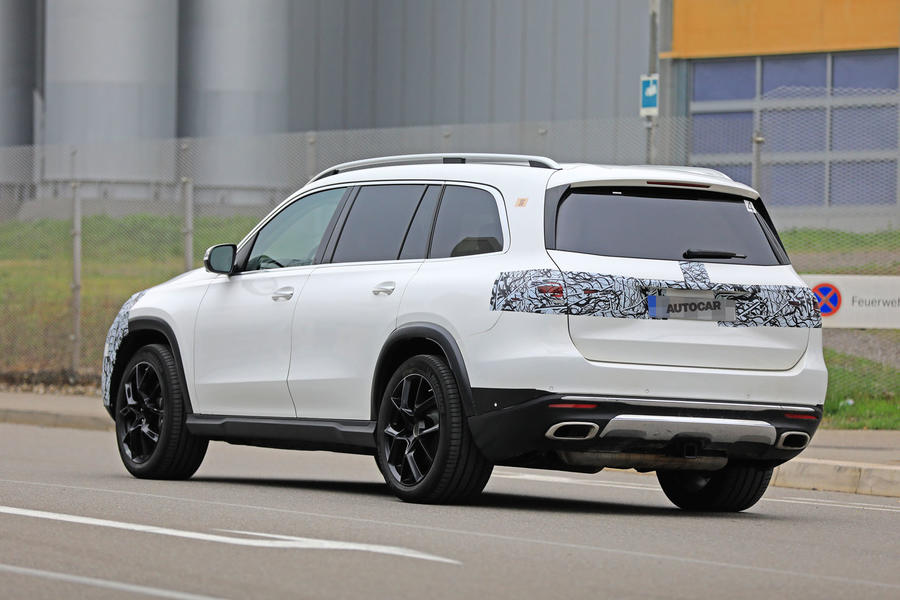 An electrified powertrain will help to ensure the GLS can compete in regions with strict emissions limits and survive into the era of new European Union CO2 limit enforcement, which will begin in 2020.

At the top of the range will be a Mercedes-AMG GLS 63 featuring a twin-turbocharged 4.0-litre petrol V8, likely with the same 612bhp output as it has in the S63.

Mercedes-Maybach GLS on the cards for 2020

Mercedes is also planning to expand its luxury Maybach line with a plush range-topping version of the GLS next year.

The Mercedes-Maybach GLS will be marked out by unique vertical grille slats, chrome exterior detailing, unique wheels and distinct badging. The biggest changes will be to the interior, however, where Maybach is likely to ditch a seven-seat layout for five or six captain's chairs.

Maybach is considered an important brand for Mercedes to develop, given the rising demand for luxury models, particularly in the SUV sector, with rivals such as Bentley and Land Rover finding notable success with the Bentayga and Range Rover. Mercedes has also seen strong growth of its AMG performance arm and would like to emulate this success with Maybach on a smaller but still profitable scale.

The range-topping version of the new GLS, first reported to be on the cards by Autocar in 2016, is tipped to be priced above £120,000.

The model will build on initiatives taken with the two-year-old Mercedes-Maybach S-Class.

Insiders involved in the development of the forthcoming SUV, known internally as the Maybach 9, say it will not only preview the look of the SUV, with a bold new grille among the key elements, but also highlight the kind of high-end features, including autonomous driving functions, due to be offered.

A high-level Mercedes official told Autocar: “We have been quietly surprised by the sales success of the Mercedes-Maybach S-Class, which is proving extremely popular in many key markets. The plan now is to extend the exclusivity surrounding the Maybach name into the upper end of the SUV segment. We’re confident that this new model will leave little to be desired in terms of luxury.”

The model, which is set to be called the GLS 560, is likely to be offered exclusively with the AMG-developed M177 twin-turbocharged 4.0-litre V8 petrol engine. In the S560, this produces 462bhp.

The engine, which features a cylinder shutdown function for added fuel savings in city driving, will replace the twin-turbocharged 4.7-litre V8 used in today’s GLS 500.

Also under discussion for the Mercedes-Maybach GLS is the plug-in petrol-electric drivetrain from the S560e. This combines Mercedes’ turbocharged and electronically supercharged 3.0-litre in-line six-cylinder petrol engine, which makes 362bhp, with a 121bhp electric motor and a lithium ion battery. It's said to offer an electric-only driving range of up to 31 miles.

The new GLS will be produced exclusively at Mercedes’ plant in Tuscaloosa, Alabama, making the range-topper the first Maybach model to be produced in the US.

Looks bulky than before

I would say, it has this bulky macho look than more of its ancient versions. Its surely attractive and rigid than other cars in the same segment

...for I was hoping Mercedes would pull the trigger and make their Maybach GLS, look like and have the shape of the concept that they showed at, I think it was, the recent Shanghai auto show. IMHO, that was a vehicle that i would have loved to see go up against the likes of the Bentayga and the Cullinan!  As it stands, to me, it just seems to be yet another trim level, like when they put AMG badging on some vehicles but they are not actual full fledged AMG. The difference with Maybach and AMG, is that the former is only appointments and eye candy and AMG is actual hardware in most cases. While recent Rolls Royce's and Bentleys have been product of lesser brands, but wearing much better clothes, Maybach's are Mercedes who wear nicer things you can see and touch! While, as we have seen, it maybe okay for these vehicles to have donor bones from lesser vehicles, for Maybach to be treated as an equal among those it considers its peers, it has to be more then a trim level of Mercedes-Benz!

So, if this a GLS Maybach, it’s not just what it looks like on the outside, it’s inside that really matters, the GLS will have to be more special inside that it main rivals....