BACK TO ALL NEWS
Currently reading: New Alfa Romeo Stelvio to take on Porsche Macan
UP NEXT
Join the Q: New Genesis GV70 faces Audi Q5

The first-ever Alfa Romeo SUV, strongly tipped to be called the Stelvio, is expected to be launched as an ultra-high-performance model powered by the firm’s potent V6 engine.

The decision to launch the new SUV in 2017 with a top-end performance model mirrors the strategy currently being applied to the roll-out of Alfa’s BMW 3 Series rival, the Giulia, with which the Stelvio will share many of its underpinnings and powertrain options.

In doing so, Alfa hopes to signal its unabashed confidence in taking on the fastest performance SUVs from Audi, BMW, Jaguar, Mercedes-Benz and Porsche.

Insiders say the firm’s bosses have given engineers the go-ahead to develop the car to challenge the class best for on-road ride and handling as well as straight-line pace. The intention is that these qualities will underpin the entire model range and clearly differentiate it from the all-road prowess of Fiat Chrysler Automobiles (FCA) stablemate Jeep.

Power for the high-performance Stelvio will come from the same twin-turbo 2.9-litre petrol V6 that sits under the bonnet of the Giulia Quadrifoglio — the engine that its maker describes as being “inspired” by sister brand Ferrari’s turbo-powered V8 without actually having any relation in structural terms. In the 1524kg Giulia, it produces 503bhp and 443lb ft of torque, resulting in a 0-62mph time of 3.9sec.

Will the Stelvio cut it as an SUV?

However, the engine is likely to be retuned for increased torque at the expense of outright power in the Stelvio, in line with its SUV character, prompting suggestions that it may not be badged as a full-blown Quadrifoglio model. Even so, it is expected to be linked to the same eight-speed automatic gearbox as standard, with a manual option unlikely to be offered.

Likewise, although rear-wheel-drive and all-wheel-drive models will be made, this top performance version is tipped to be restricted to rear drive to save weight and add agility.

In particular, Alfa is said to be benchmarking the Stelvio against the Macan and Jaguar F-Pace. Insiders have indicated that the Porsche has been considered the dynamic benchmark to date, but the achievements of the XE saloon and positive early reviews of the F-Pace have forced the development team to also consider Jaguar’s contender.

The Stelvio’s development is being overseen by Ferrari’s former technical director, Roberto Fedeli, who rejoined FCA as chief technical officer from a role at BMW’s M division early this year and reports directly to Alfa and Maserati boss Harald Wester. Fedeli’s reputation was cemented during his spell at Ferrari, where he was credited with overseeing the engineering of all of its cars from 2007 to 2014, including the LaFerrari, F12 Berlinetta and 458 Italia. 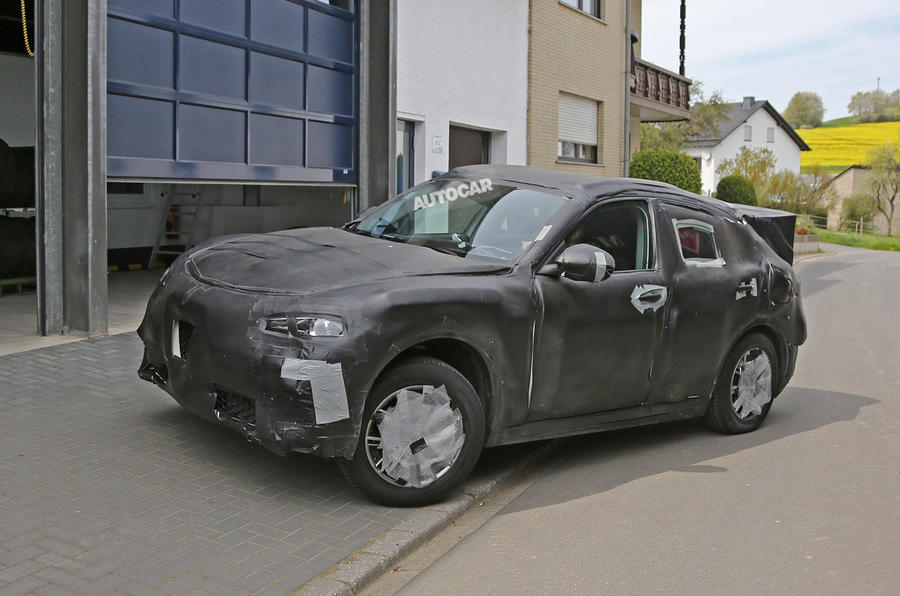 The choice of the Stelvio name was revealed by FCA boss Sergio Marchionne in an off-the-cuff remark at Alfa Romeo’s Stabilimento Fiat di Cassino production plant in Italy. Insiders have subsequently said it is one of three names under consideration, but it is significant for the clues it gives about the SUV’s intent.

It is named after the famous Stelvio Pass, which runs over the Alps in northern Italy and is widely regarded as one of the most challenging driving routes in the world. As such, it signals the company’s intent to put a sharp focus on the SUV’s dynamic appeal.

To date, Alfa has issued few official details about the Stelvio. Spy pictures of the car testing have been confined to heavily disguised mules, although a single, seemingly off-the-cuff picture taken by FCA’s head of design, Ralph Gilles, of Alfa and Fiat designer Lorenzo Ramaciotti sitting in the boot hit the internet last year. It revealed little beyond the boot opening’s shape and a glimpse of the dashboard, which also followed the format of the Giulia’s. However, with the Giulia’s interior layout and quality already receiving some criticism, rumours suggest the Stelvio’s could be improved before launch and the changes fed back to the saloon as part of a 2017 model year update.

The exterior shape is expected to be in line with the current Alfa family look, with the Stelvio being designed to accommodate five despite a coupé-like tapering roof to underline its sporty credentials.

“What’s clear is that we want a family look for our cars,” the head of Alfa Romeo in the EMEA region, Fabrizio Curci, told Autocar at the Geneva motor show, without specific reference to the Stelvio. “We have a philosophy that says if you like driving, then you will like our cars, and from that point, we build the appeal, from the technology in the cars to the service you get at our dealerships. I am not going to claim that our cars are better than those of our rivals, but I am going to tell you that they are different. We have a very pure, simple DNA at Alfa, not just guided by our heritage but also by our plans for the future. We know what we want from our cars, and that is an asset.

“We have a focus, informed by our 105-year history, that puts technical development and design first, and that informs everything from how we plan the cars to how we build them and how we sell them. At the heart of an Alfa is the driver. We plan around the driver and we build around the driver. Whatever the vehicle, an Alfa must deliver heart and soul. Our cars must be well rounded but always with a focus on delivering fun.”

The biggest-selling Stelvio models will be powered by petrol and diesel engines, but there is the prospect of plug-in hybrids joining the range. FCA confirmed to investors that it would launch plug-in hybrid vehicles from 2016 and offer a new 48V electrical architecture for mild hybrids from 2018.

More formal details are expected to be revealed when the production car is unveiled, most likely at this year’s LA motor show in November or the Detroit motor show in January.

In time, Alfa is expected to launch a three-strong SUV family in its quest to cash in on booming global demand for the bodystyle. One is expected to be bigger and the other smaller than the Stelvio, giving Alfa rivals to the BMW X1 and X5.

Wester has previously hinted at the importance of entering the crossover market aggressively, telling Autocar: “You can remain pure and ignore the crossover trend, but if you do, you can look forward to a beautiful death.”

Alfa Romeo has been suffering a slow decline in sales for more than a decade — it peaked in Europe in 2001 with 205,432 units — but the launch of the Giulia this year and the Stelvio next year should kick-start a reversal of that trend. Whether it is enough to allow the firm to reach the 400,000 annual sales that bosses say are key to its sustainability remains to be seen.

To hit that sales goal, the firm has said it will launch eight new models by 2020, boosted by investment of around €5 billion (£4bn).

These are expected to include a BMW 5 Series rival, a replacement for the Giulietta, two new SUVs and two so-called “speciality vehicles”, likely to be special editions in the vein of the 4C, although whether these are sports cars, other coupés or derivatives of existing models is unknown. It is not clear whether the Mito supermini will be replaced.

Success in North America will be crucial, which in part explains why the Stelvio SUV is likely to be launched at one of the key US motor shows. Of the 400,000 targeted sales, around 150,000 are predicted to come from the region. Sales in China remain a priority, although Alfa’s presence in the region has so far stalled due to the lack of a global distribution network and import restrictions.