BACK TO ALL NEWS
Currently reading: VW ID R takes all-time Goodwood hillclimb record - with video
UP NEXT
Skoda to launch electric saloons and estates alongside SUVs

Volkswagen has smashed the outright hillclimb record at Goodwood Festival of Speed with the 671bhp ID R electric racer.

Driver Romain Dumas initially took the record on the second day of the event, setting a time of 41.18 seconds in a practice session, before going even faster a day later with a 39.90 in the timed shootout.

All the news from the 2019 Goodwood Festival of Speed

The previous record for the Sussex course had stood since 1999, when Heidfeld set a time of 41.18 seconds at the wheel of  McLaren MP4/13 F1 car - a pace so far ahead of anything else that Formula One cars were subsequently banned from making timed runs.

Volkswagen adapted the ID R specifically for Goodwood with the smallest battery yet fitted to the car, in order to reduce weight to below 1000kg including driver. "This is as light as the car will ever get," technical director François-Xavier Demaison said. "We have no need to conserve energy here, power is always at a maximum."

With one day of the 2019 Festival remaining, there's every chance Dumas will get another chance to go even faster, although a chance of rain may prevent further improvements. He joked after breaking the record for a second time, saying "if we stay one more week, it’s possible we could find a few more tenths."

The ID R came to Goodwood fresh from its record breaking efforts at the Nurburgring, where it set the fastest lap ever for an electric car with a time of 6min 05.336secs.

They included a new F1-inspired aerodynamics package, which added a new rear wing, redesigned front splitter and drag reduction system (DRS) which, when deployed, reduces downforce by as much as 20%. Changes to the energy management system help the car reach its top speed faster, while using less energy from its twin lithium-ion battery packs.

Driver Dumas, who has won the Nurburgring 24-hour race four times dethroned the Nio EP9 electric hypercar by more than 40 seconds. The EP9 set the previous record for fastest EV around the 'Ring in 2017 with a time of 6:45.90. 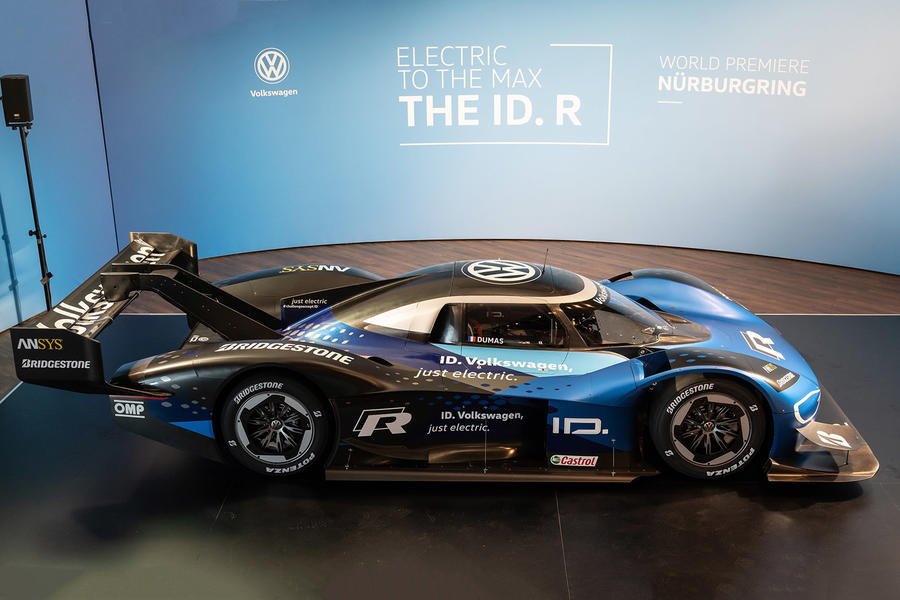 Volkswagen also teamed up with free-to-play racing simulator RaceRoom to let players digitally compete with its real-world record attempt. A virtual version of the ID R was created using data from the original car, with VW Motorsport engineers helping to create a realistic driving experience.

“The ID. R’s mission to be the spearhead of the fully electric ID. product family from Volkswagen continues in full force,” Volkswagen's Motorsport Director Sven Smeets, said. “Once again, this time in 2019, the ID. R will demonstrate the great potential of electric drive, combining emissions-free technology with true emotion.”

Bend the rules for next year, let’s have a few F1 teams have a go, I’m sure they’d be itching to beat an EV up the Hill.

A Formula E car has half the horsepower of the ID-R. I don't think there would be any floor wiping.

Surprised if there isn’t?

No, I’m pretty sure there’d be some there, maybe not entered but would’ve been up the Hill.