The new Honda E electric city car has made its UK debut at the Goodwood Festival of Speed.

A running prototype has taken to the event's hillclimb course, with another on display on the Honda stand, flanked by the latest version of Honda's Honda NSX sports car. Honda says the E appearing at Goodwood is "95% true" to the production version.

The new machine, which is available to order before deliveries commence in 2020, boasts a 50:50 weight distribution and a low centre of gravity, thanks to the placement of its batteries low within its wheelbase. Power is sent through the rear wheels, and the car rides on four-wheel independent suspension.

The E uses a liquid-cooled 35.5kWh battery that Honda claims should deliver more than 125 miles of range. Rapid-charging should allow for an 80% charge in less than 30 minutes, although Honda has yet to reveal the exact maximum charging capacity of the car.

While the estimated range is substantially lower than that offered by rival EVs such as the 282-mile Kia e-Niro and 193-mile BMW i3, Honda e project manager Kohei Hitomi explained that this was necessary to keep the batteries small to fulfil its city car role.

“We believe the range is sufficient for this segment of car,” said Hitomi. “Some potential customers might not be satisfied, but when you think about bigger range and a bigger battery, it has drawbacks in terms of packaging. It’s a balance.” 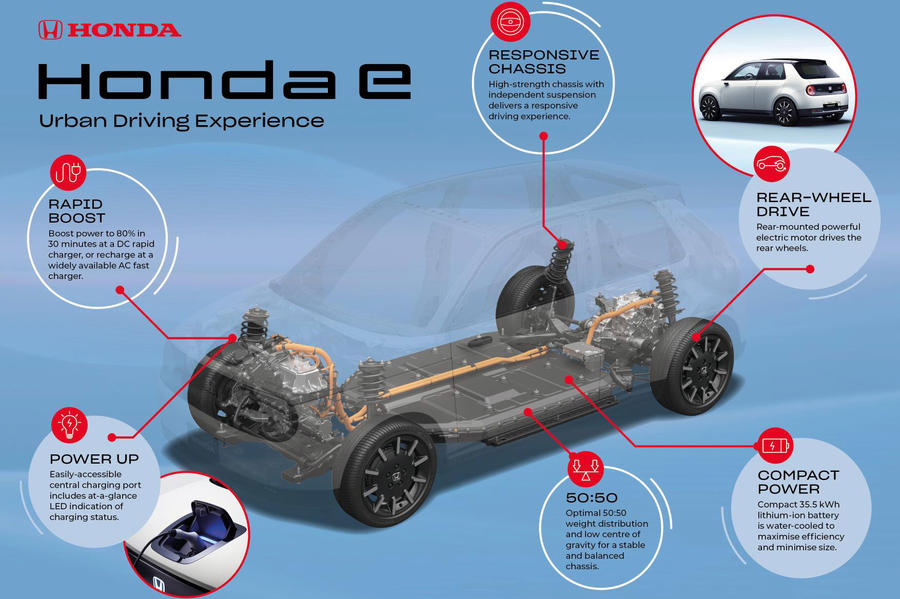 The E is the production version of the Urban EV concept, which was revealed at the 2017 Frankfurt motor show, and Honda has confirmed that many of that car's features will reach the final model as standard. These will include the camera wing mirror system, which Honda claims reduces aerodynamic drag by around 90%. That is said to improve the efficicency of the entire vehicle by 3.8%, playing a significant role in maximising range.

The camera system will feature two modes: a normal mode and a wide mode with an extended field of view, and Honda claims they reduce blindspots by at least 10% compared to mirrors. A special water-repellent coating will be used to stop water obscuring the driver's vision. 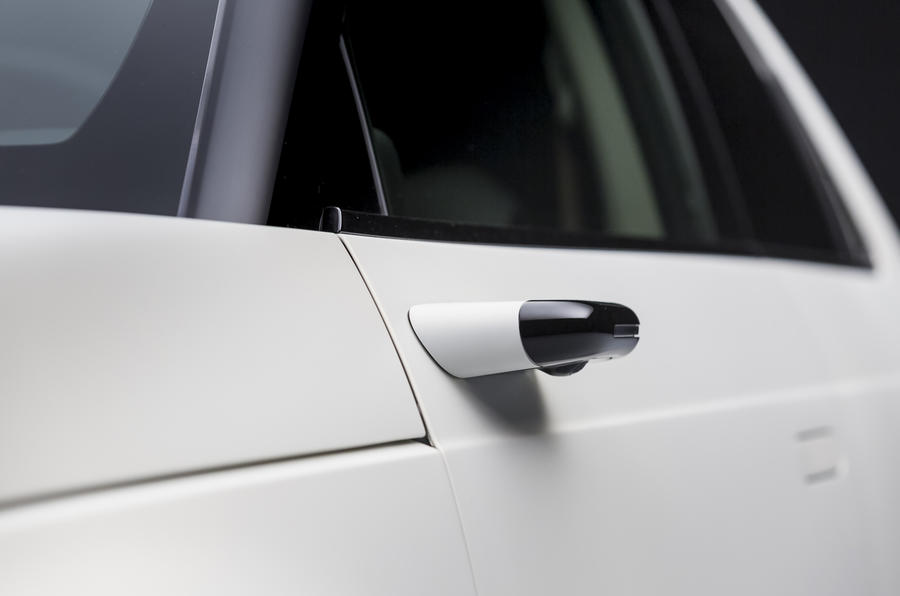 Honda recently began taking orders for the E, ahead of first deliveries beginning in spring 2020.

Mirroring the process of rivals such as Tesla and Peugeot with the e-208, potential customers are invited to cough up a reservation fee of £800 for "priority status" in the order books. Those customers will be invited to place a full order later this year. The e's pricing is still yet to be announced, but as with most reservations, the fee is refundable if buyers change their mind.

A near-production version of the E was shown at this year's Geneva motor show, dubbed the E Prototype. Honda has confirmed the 'E' name will stay for the production version and revealed a selection of available paint options for customers at launch. 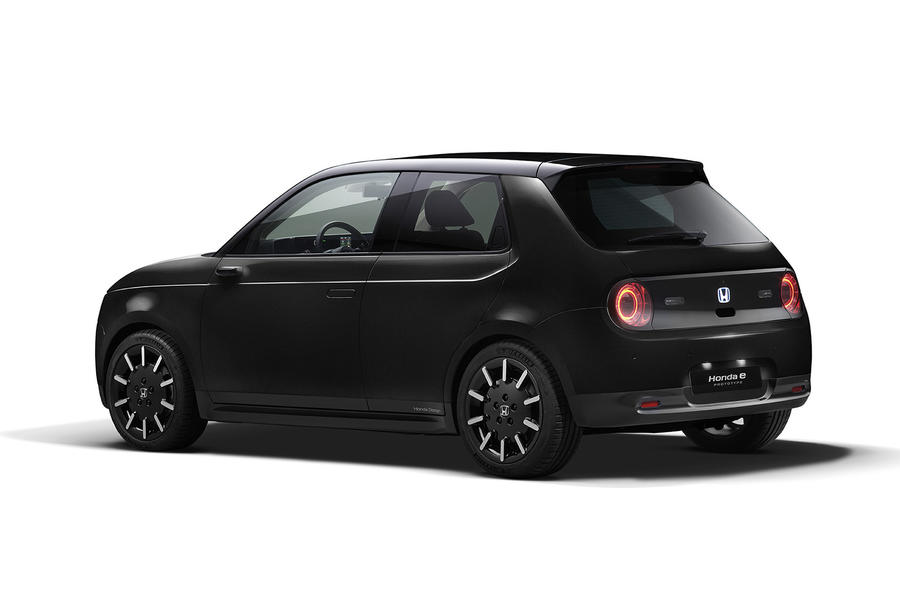 The firm believes the car’s retro design will give it an Apple-style appeal to customers.

Honda has said there are more than 6500 people in the UK who have expressed interest in the E so far. Pricing has yet to be set, but Autocar understands a ballpark figure is £35,000.

Project manager Kohei Hitomi said the machine had been the subject of an internal “battle” over whether to put it into production, with the positive reaction to the concept being a key factor in it gaining approval.

The car is slightly shorter than the Honda Jazz and around 100mm taller than the Mini hatchback. It is built on a new platform designed for A and B-segment electric cars, with underfloor batteries produced by Panasonic that are similar to those used in the US-market Accord plug-in hybrid. The rear-mounted electric motor drives the rear wheels, which employ torque vectoring to give a smoother response and improved handling in tight corners.

As well as featuring cameras instead of rear-view mirrors, there are also flush door handles to further boost aerodynamic efficiency, while the charging port is mounted centrally in the bonnet. 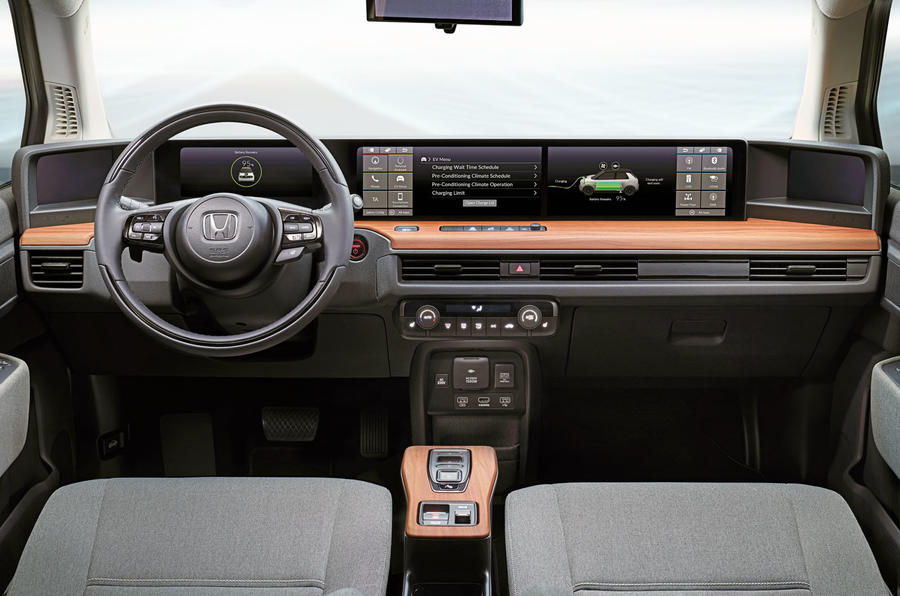 The cockpit of the E is dominated by two 12in touchscreens, built into a dashboard finished with a wood-effect trim. The seats – including a two-seat bench in the rear – are covered in polyester, which, as with the wood effect, is designed to make the interior feel like a living room.

The E will be built in Japan and go on sale in selected European markets in late 2019, with others following in 2020. It will also be sold in Japan.

Hitomi said it is “important” the car is affordable but he added: “A low price is not always a guarantee of success. When you look at Apple products, they are not cheap, but everyone wants to have them because of their added value. We believe it is the same for the electric vehicle.”

Out in the wild

it looks bloody awful, like something a clown would pull up in before all the doors fell off..

The more I see it

and read about it, the worse it becomes, and at £35k its roughly the same price as a Model 3, what were Honda thinking.. The only people this will appeal to in my opinion is those trading up from a 2CV.