BACK TO ALL NEWS
Currently reading: Electric Bentley EXP12 Speed 6e roadster revealed in Geneva
UP NEXT
2024 BMW X3 primed to take on Mercedes-Benz GLC

The Bentley EXP12 Speed 6e is a two-seater concept that reinforces its maker’s growing interest in electric propulsion as a two-seater luxury car medium with a new two-seat roadster concept.

Unveiled at the Geneva motor show, the new car develops many of the themes first expressed in the EXP10 coupé concept unveiled in Geneva two years ago. It also signals the direction of Bentley’s thinking about the shape of the fifth model line to which Bentley CEO Wolfgang Dürheimer has often referred.

A two-seat sports car has not yet been signed off for production, but Dürheimer has previously told Autocar that adding another model would put Bentley “on a very sound footing for the future”.

He said: “I can tell you that the new car will be younger and more exciting than anything in our line-up. It will appeal to a completely new kind of customer.”

Showing a convertible version in Geneva is a perfect way to gauge industry and public reaction ahead of a likely sign-off for the car, which is slated for production in 2019. 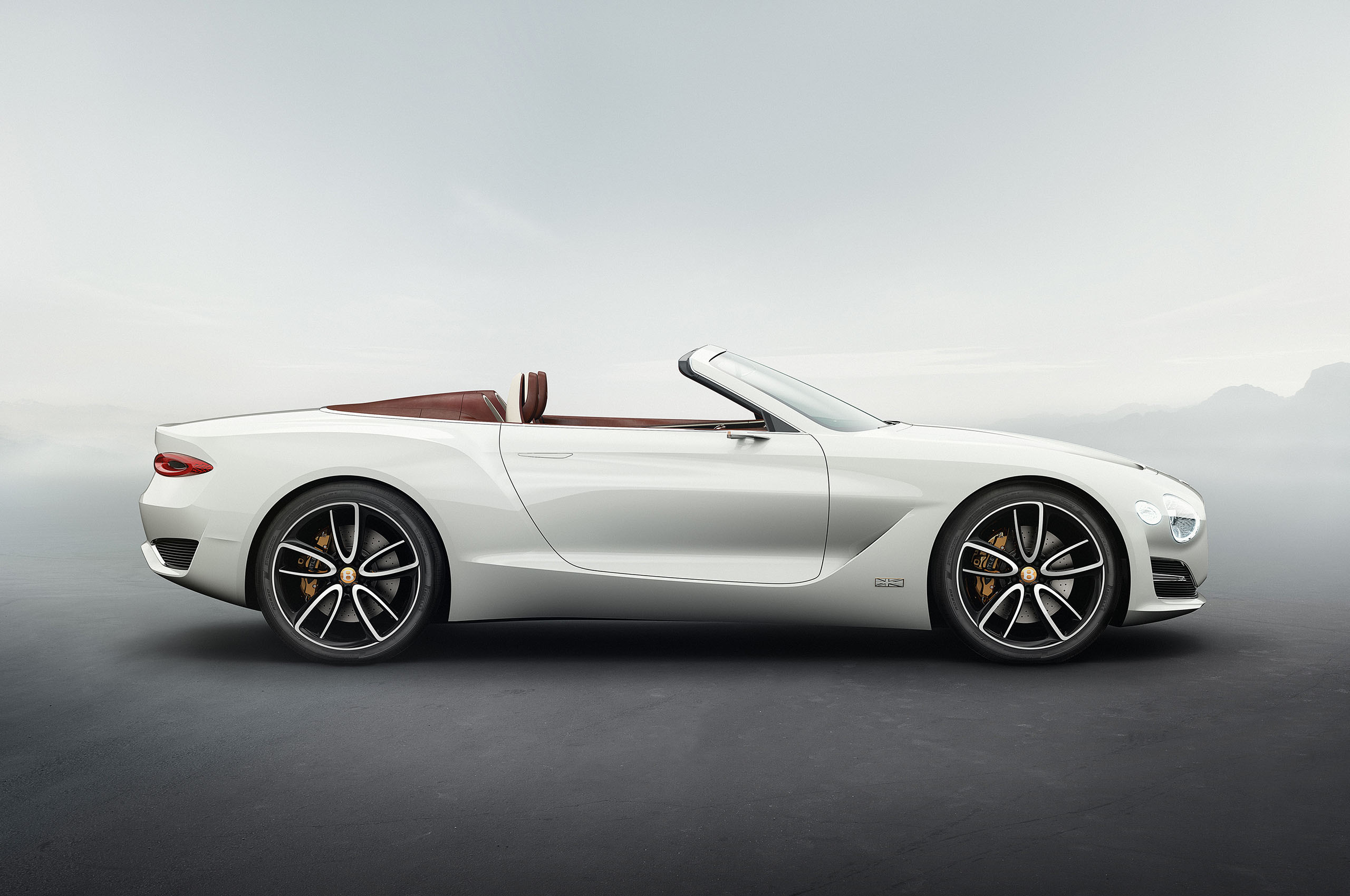 The EXP12 has been designed in Bentley’s Crewe studios under design director Stefan Sielaff. Its body mixes traditional Bentley design cues — such as the mesh grille and strong rear haunches — with new low-nose proportions for a Bentley that give the car a frontal grace and delicacy not usually possible in cars powered by (at least) a twinturbo 4.0-litre V8 mounted very far forward in the nose.

Bentley isn’t keen to give much away about the powertrain, but evidence from the car’s impressive instrument graphics suggests a 300-mile range and a four-wheel drive powertrain, consisting of a pair of motors mounted between the wheels, one at the front, one at the rear.

There’s no detail about battery location, but the low seating positions and the high centre console suggest it might be carried in a T- shape, running down the spine of the car and then across it, behind the occupants. In any case, its EXP10 sister car was proposed with a more conventional petrol-electric powertrain, a system that would doubtless fit this car and is already common in other cars from the Volkswagen Group.

The EXP12 Speed 6e is well-proportioned mid-size two-seater, a little larger in footprint than an Aston Martin V8 Aston Martin Vantage but shorter by perhaps 20cm than a Continental GT.

The familiar Bentley mesh grille has been revised and set low at the front of the car, with a wide air scoop below that, running right across. There are suggestions of an aerodynamic splitter, with a chin detail at its edges faintly reminiscent of a battery heat-sink, but the EXP12 is far from governed by aerodynamic gadgetry. It allows a relatively small frontal area and a notably clean shape across the bonnet — which features a familiar ‘sighting’ crease down the centre line — in order to keep aerodynamic drag under control. 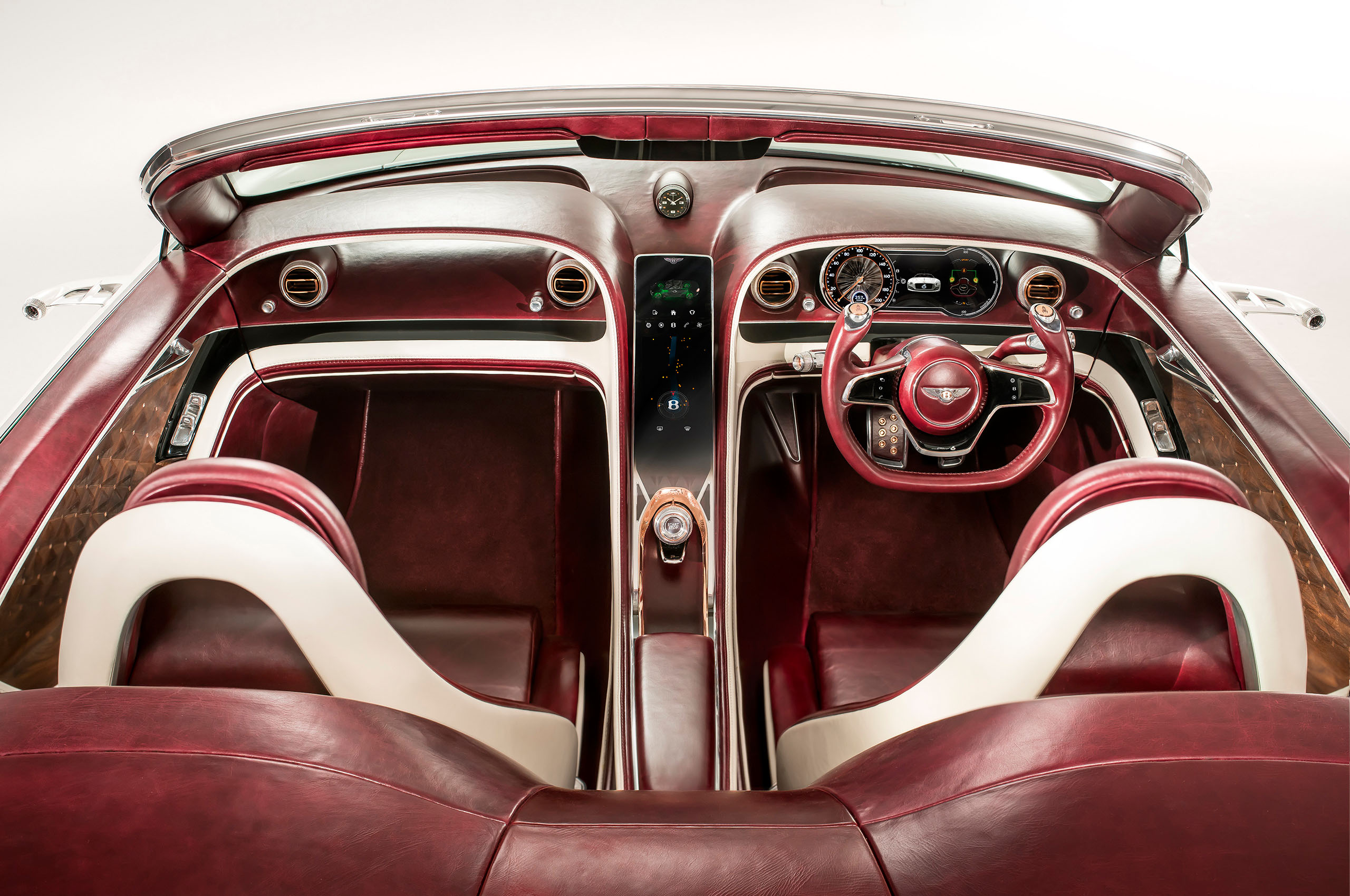 “Although this is an electric car, we were passionate that it had to represent the soul of the brand,” said Sielaff. “We certainly didn’t want it looking like some kind of driving refrigerator. Our job is to transport the advantages of electric drive into luxury cars in a way our customers appreciate, which is why EXP12 still has its modern expression of our traditional grille. In any case, the impression people have that electric cars don’t need supplies of cooling air is quite wrong. They do need it.”

Close inspection reveals diamond-shaped pieces of copper, no more than 2-3mm across, mounted at every intersection of the grille’s mesh pieces. The detail is an allusion to the car’s electric powertrain, according to John Paul ‘JP’ Gregory, head of exterior design, and it was also used less prominently on Bentley’s Mulsanne hybrid.

“It’s right for an electric Bentley,” said Gregory. “It’s a precious material and an authentic one. We’ve used copper in little details all over the car.”

Remembering the Bentley Java of Geneva 1994

The EXP12 continues to explore the Bentley design elements of tomorrow, Gregory added. “It’s a way of getting customers and Bentley’s top management used to what’s coming, which is vital because all future Bentleys will be made in aluminium, a material that can’t always be as easily shaped as steel,” he said.

However, the EXP12’s flanks do not reflect any such difficulties. The car features a familiar but modernised ‘power line’ that starts low at the front, radiuses the front wheels, then flows, past a pair of elegant extractor vents, along the body sides, fading away just before it intersects the typically strong Bentley rear-wheel haunch, a feature that gives the car its classic, rear-wheel-drive roadster character. 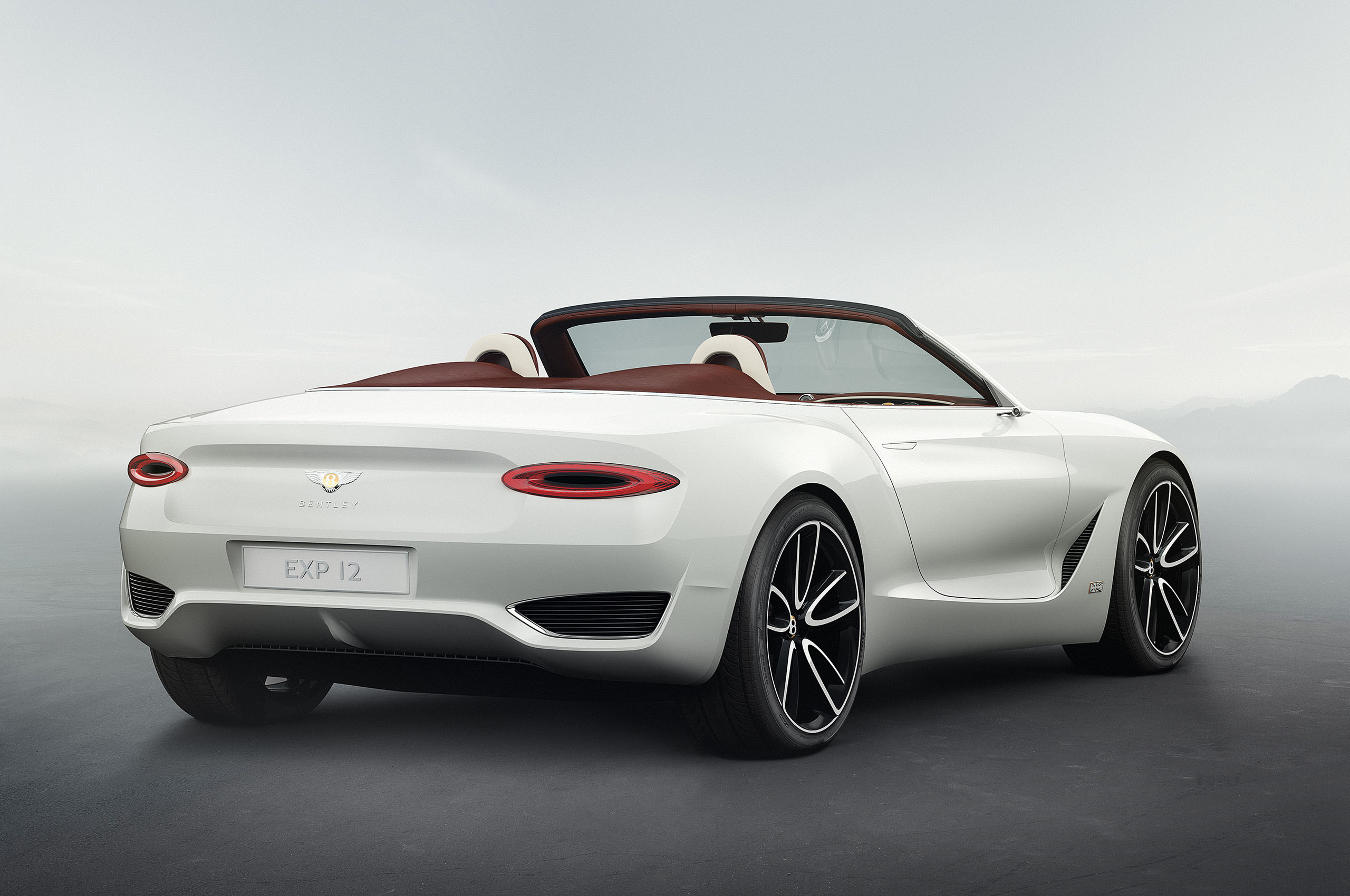 The rear deck is a flat bootlid whose shutline runs around the perimeter of the body just a couple of centimetres from its well-defined edge. The feature is reminiscent of old-time coachbuilding but is unlikely to survive into production, said Sielaff, because owners might damage the car by lifting luggage over such a high lip.

As well as its traditional grille, the EXP12 retains four round headlights in the Bentley style, with a designedin ‘crystal glass’ effect that Bentley’s designers also used on the EXP10 and liked so much they adopted it again.

Whereas many designers today struggle to use anything but traditional wood and leather, Bentley’s interior design chief, Brett Boydell, has revelled in the opportunity to cover the EXP12’s easily accessed cockpit richly in both materials, while concentrating on doing it differently.

The seat patterns feature a style of diamond stitching known as ‘kilting’, which both echoes the grille shape and sets a theme for door inners, elegantly milled in a similar pattern from solid walnut — with small copper diamonds to define the intersections of the pattern’s lines. It may sound over the top but it isn’t.

The fascia is a handsome, leathered, wing-shaped sculpture that surrounds the two occupants and gives an authentic cockpit feel. Every surface (apart from switch panels, console screens and two dials that magically move to attain the vertical as part of a commencement procedure) is covered in rich leather, an antique hide that “goes back a little”, as Boydell put it, from the perfect hides used in cars today. This stuff is beautiful, he said, but just like the car and its owner, its aging will be evident. 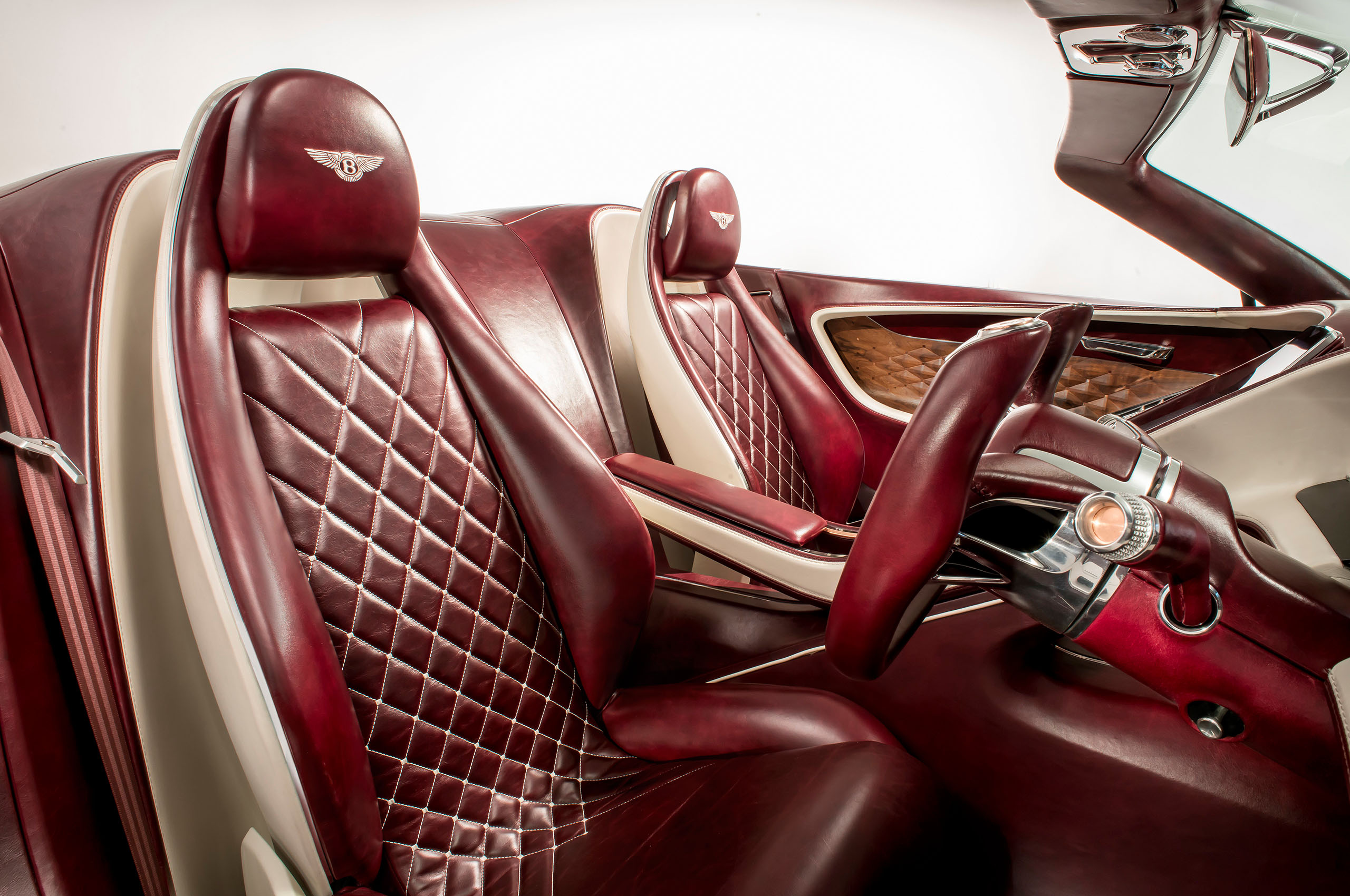 The steering wheel is reminiscent of designs proposed decades ago for spaceships: it’s a round affair with the top 45deg missing. “People love it or hate it,” said Sielaff. “We are about to discover what our customers think.” Buttons atop each wheel stump have a rock symbol, proposing a race-style short-duration boost control.

hort-duration boost control. In the centre console, there’s a multi-function rotary switch that selects motion (forward, neutral, reverse) plus a neat little copper paddle above that determines the driving mode.

Ahead of that, a black background blends into screens that carry anything from map directions to confirmation of a restaurant booking, while on the other side of the wing-shaped structure is a horizontal seam-shaped interface that allows a co-pilot to stay in touch with social media.

The overall effect is of a comfortable, luxurious and surprisingly practical touring car with a decent boot and easy access, and which would very neatly fit the motoring environment of today.

Bentley is remaining tight-lipped on whether the EXP12 will make production, confirming only that customers will help it decide.

Bentley Mulsanne to swap its V8 for electric power

This Bentley is so luxury and

This Bentley is so luxury and wonderful. I wanna own one gmail

Ugh! Interior looks like a 60's Corvette, no useful room behind the rear seats, can't do a one handed twirl with that wheel [a la Kojak].we will never see this in production, just like we have never seen a proper ur Quattro.Pity!
wmb 8 March 2017

That the same company that put out that HORRIBLE Bentegay, could then turn around and do some as beautiful as this! Looks are subjective and I'm sure the Bentegay is a lovely vehicle to be in and operate. But this car is a thing of beauty and it does not seem fair that if they should put this and the coupe into production, they didn't also build a sedan, if only to secure the other two's continued existence, IMHO! I will admit that the thought of Bentley doing another product line below the Continental and Flying Spur, would have enraged me, especially with the one hit wonder that is Bugatti having just one vehicle to carry the brand! But I would be willing to soften my stand (as if it mattered to the VW Group and those who purchase these types of vehicles) if they were to put a vehicle like this into production!
View all comments (9)