A new unconventional-looking concept called the Giugiaro Sibylla has been revealed with cutting-edge electric technology that signals a future of sustainable energy usage in cars.

On show at the Geneva motor show, the four-door has been penned by Italdesign founder Giorgetto Giugiaro and his son Fabrizio at their new design house, GFG Style, with heavy influence from cars of the 1960s and 1970s. The forward-hinged front canopy is a direct nod to the Chevrolet Testudo, which Giugiaro designed back in 1963.

Beneath the car's glass-dominated exterior is advanced technology from Chinese renewable energy company Envision that allows it to efficiently manage power and contribute to the electric grid. Envision executive director Felix Zhang told Autocar that while this car is a concept, the systems it uses demonstrate Envision's extensive expertise in sustainable power for vehicles, previewing what's to come in the near future.

"The car uses our Internet of Things technology so it is synchronised with the energy ecosystem," he said. "Our technology aims to run 100% of the car on energy sourced from renewables, such as wind and solar power." 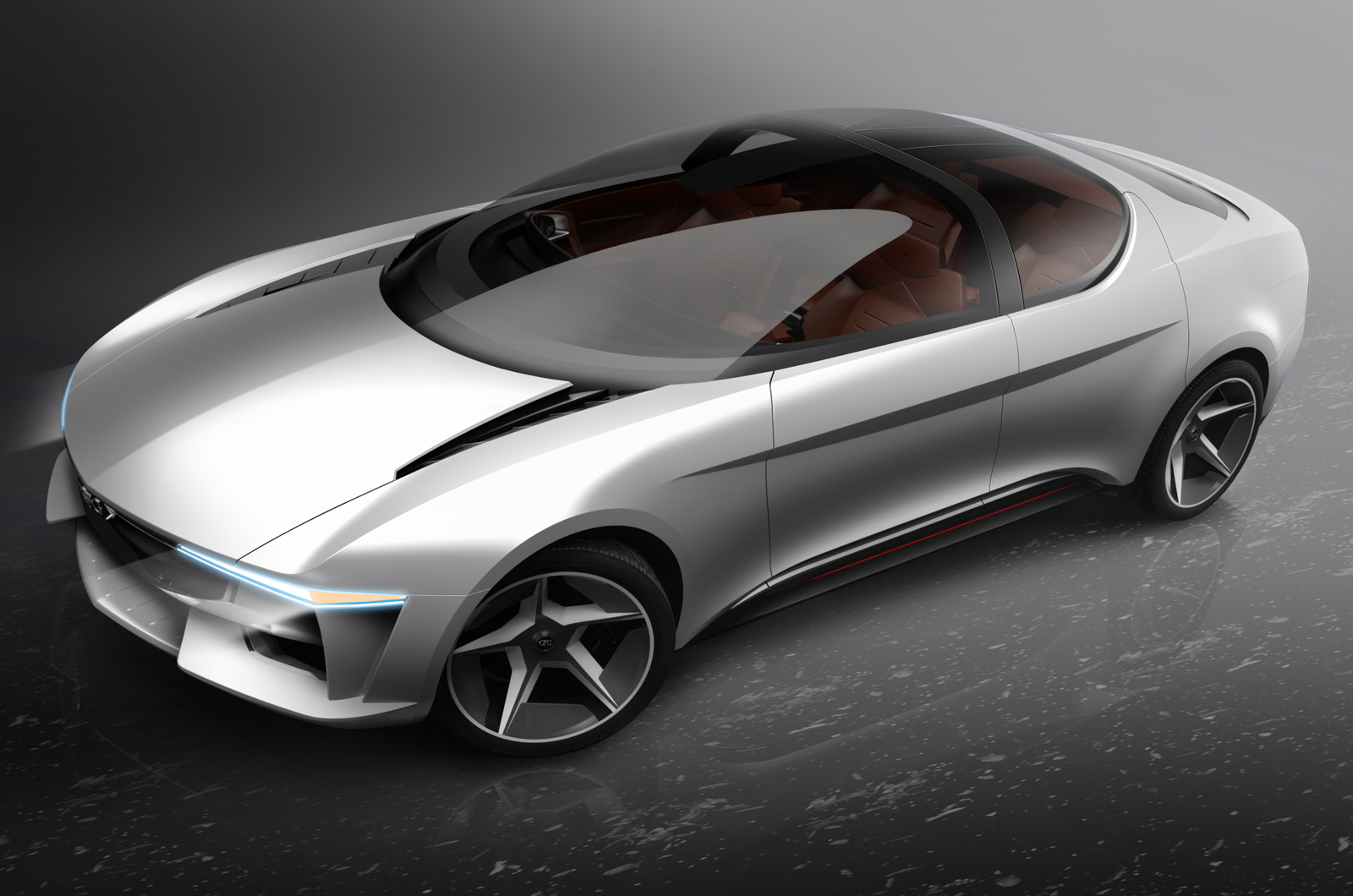 The Sibylla, which is longer than a Mercedes-Benz E-Class, is powered by an electric powertrain of four motors, each powering a wheel. These motors together generate 536bhp and can accelerate the car from zero to 62mph in 4.5sec. Top speed is at least 124mph.

The car uses a 100kWh battery pack and its total range is said to be 280 miles. Passengers can keep on eye on remaining energy levels via the car's digital dash screen, which displays live information for remaining mileage.

Zhang explained that Envision is optimistic for its systems, which are already being deployed in production cars in China, to better-connect "transport and renewable energy technology, so that we have a sychornised development" of two increasingly interlinked industries. 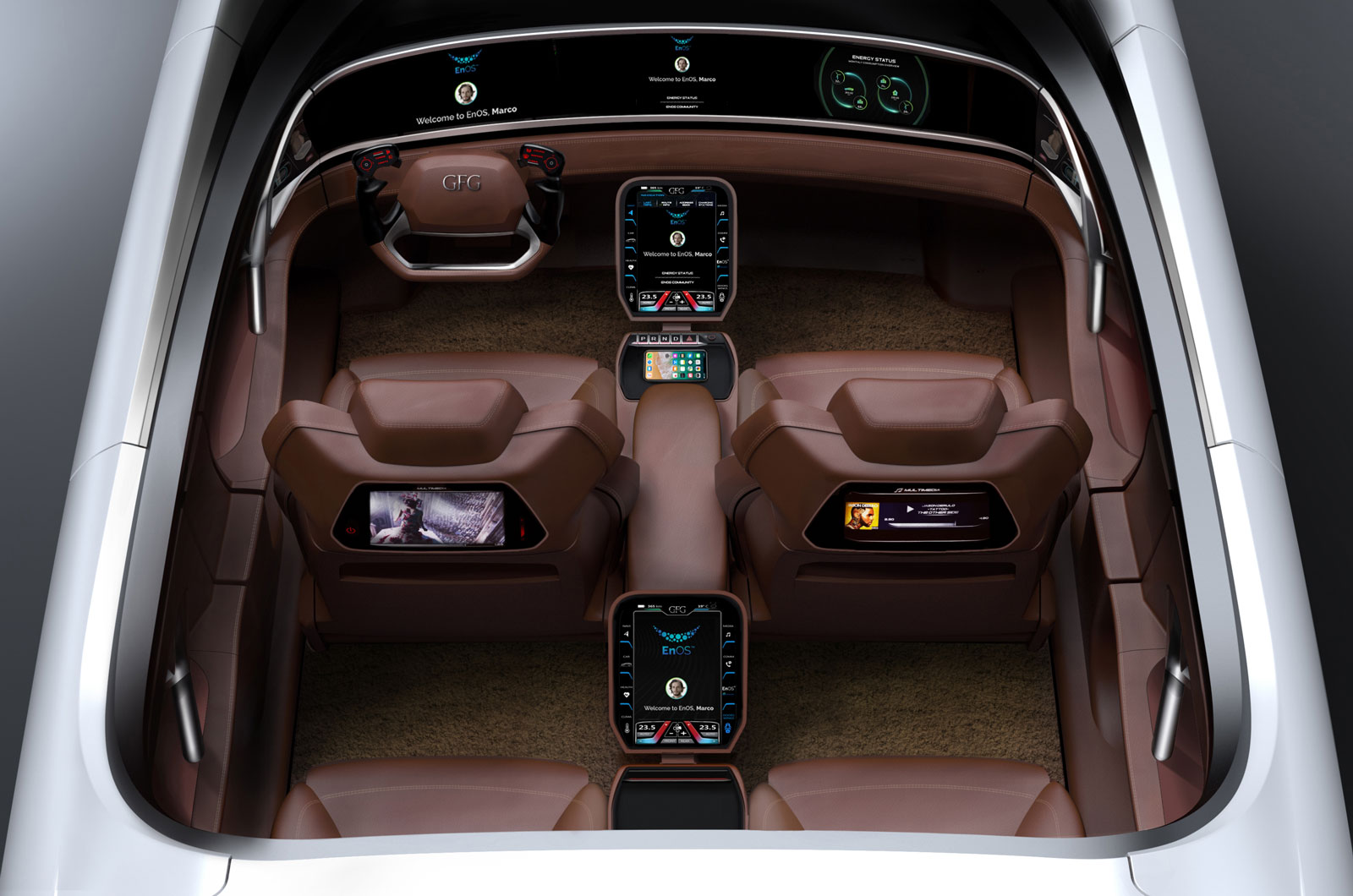 Unlike Tesla, which focuses its technology development on its own models, Envision is creating technology with open platform development to encourage input from external companies. "We don’t have to own the assets in this plan like Tesla," said Zhang. "It’s about connecting and synchronising and innovations."

Envision's technology is clearly illustrated in the interior design of the Sibylla. Its dashboard-wide screen is joined by a smaller screen in the centre console for ancillary controls. There's also another screen between the rear passengers, as well two infotainment screens, each located in the back of the front headrests and facing the rear passengers.

GFG Style's new concept is the second to be shown in public in recent times. Its first was the Techrules Ren, another electric vehicle with a front-hinged canopy that has been co-developed with a Chinese company. The Ren has just been launched in track-focused RS form.

Giugiaro and his son sold their share in Italdesign to Audi in 2015. The iconic design house will show a Zerouno convertible at the Geneva motor show with an Audi R8-sourced V10 engine.