BACK TO ALL NEWS
Currently reading: BMW launches new 330e Touring with four-wheel drive option
UP NEXT
2021 Mercedes-AMG S63 due imminently with snarling V8 hybrid

BMW has expanded its 3 Series line-up with the addition of a Touring estate version of the plug-in hybrid 330e – a first for the model.

Available to order from summer, the 330e Touring makes use of the same petrol-electric powertrain as the saloon variant, which pairs a 181bhp 2.0-litre four-cylinder engine with an electric motor integrated into the gearbox.

Both versions of the 330e can now be had with four-wheel drive as an alternative to the regular rear-wheel drive. The xDrive models can determine how much power to send to each axle depending on the driving situation. The option reduces the saloon’s 0-62mph time by 0.3sec and the estate’s by 0.1sec while ensuring “maximum traction and driving stability in all road and weather conditions”. 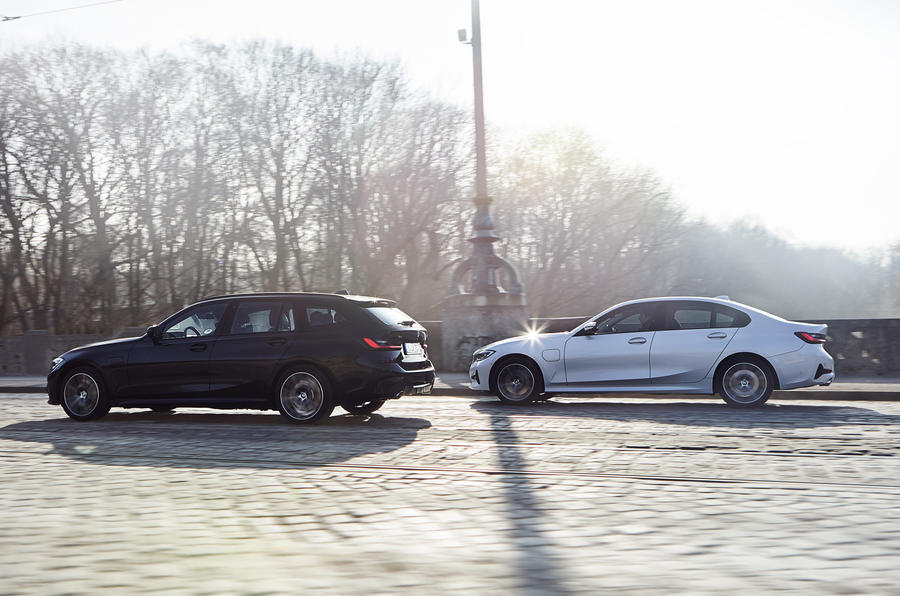 Like the 330e saloon, the 330e Touring can run on electric power alone at speeds of up to 68mph in hybrid mode or at speeds of up to 87mph when eDrive mode is activated. Its 12kWh lithium ion battery offers an official electric-only range of 34 miles, which is on a par with what the rival Volkswagen Passat GTE can achieve.

The 330e Touring is officially capable of 176-201mpg – although a figure nearer 50mpg can be expected from real-world use – and CO2 emissions of 32-37g/km. BMW claims a charging time from empty of 3.4 hours from a 7.4kW charger. Regenerative braking is included, sending charge to the battery under deceleration.

BMW claims the battery, mounted under the boot floor, only marginally diminishes boot space, with the 330e Touring offering 1420 litres of space with the rear seats folded.

After five years, the F30-generation BMW 3 Series gains a plug-in powertrain. We find out if it was worth the wait

Prices for the 330e Touring and new xDrive models are yet to be confirmed, but they're likely to command a premium over the current, rear-wheel-drive 330e saloon, which is available from £37,885.

Why use a four cylinder

Why use a four cylinder engine ? Why dont they properly downsize and use a 3 cylinder ?

Why not? 4 cylinder is more

Why not? 4 cylinder is more refined and more powerful. The success of the 330e suggests they are on to something and having test driven one a couple of weeks ago, it’s a fantastic car.

There’s talk of a 320e coming out later this year. That might use the 3 cylinder engine or could just be a detuned 2.0 4 cylinder which I think is more likely.

We're not serious about emissions.

Here we go again with crazy tax / pricing. The estate is expected to start around £40k which means an extra £320 a year in VED. If someone is serious about emissions, then we're going to have to re-examine VED rates. The double whammy of with a price hike coupled with increased VED incentified the higher polluting car. No matter how you look at it, that can be right.

awd everytime for me

In particular for more poweful cars think this is a better option for safety and comfort,agree rwd for the enthusiast ,but how many more  rwd get wrecked,thinking 911 etc.