BACK TO ALL NEWS
Currently reading: Futuristic Audi AI:ME concept hints at Volkswagen ID rival
UP NEXT
Ford backs call for European ban on new ICE cars from 2035

The new Audi AI:ME concept, which has made its public debut at the Shanghai motor show, previews the firm’s vision of shared urban mobility in the future – but also provides hints to a forthcoming A3-sized compact electric model.

The model is the third of four concepts the manufacturer is producing to show its vision for shared motoring in 10 years’ time, with the idea that subscribers choose the car they need for any given moment. It follows the 2017 Aicon concept, designed for inner-city journeys, and last year’s PB18 E-tron sports car. 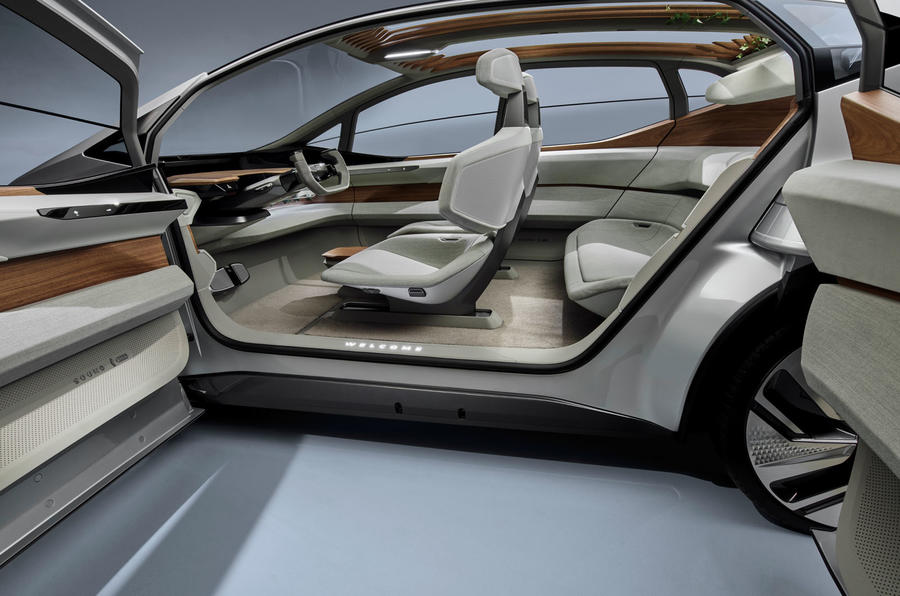 While the PB18 E-tron likely previews Audi’s future R8 successor, the styling of the AI:ME hints at a compact crossover. The firm says it isn’t built on a specific platform, but at 4300cm long, 1500cm high and 1900cm wide it is similar in size to the Volkswagen ID hatch and Seat el-Born EVs, both of which use the VW Group’s MEB electric vehicle platform.

Audi chief designer Andreas Mindt said the car was styled in such a way because “urban cars all look like telephone boxes, and we didn’t want a machine like that.” He added: “It’s still simple and boxy, with clear lines.”

Asked whether Audi would launch an MEB-based EV similar in size to the AI:ME, Mindt said: “We are working on this, let’s say. There can be. I’m not allowed to say too much, but maybe. Why not?” 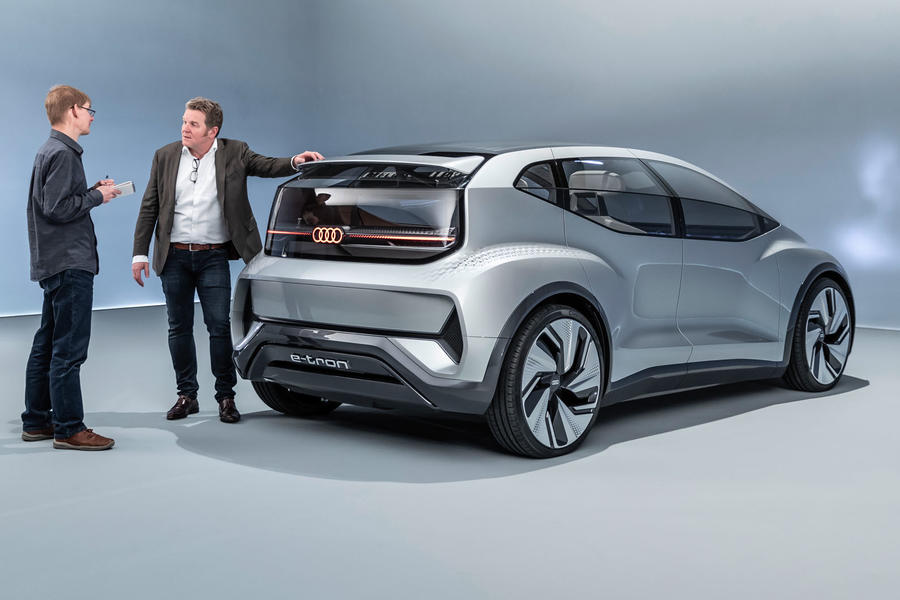 He added that several design elements of the concept would be seen on Audi models in the near future.

The AI:ME is designed for functionality in tight city environments, with a compact crossover-like body intended to maximise manoeuvrability and visibility. Unusually, the top section of the windows – distinguished by a distinctive line running around the car – is wider than the bottom part, which Mindt explained is to ensure “the widest point is where your head is, where you want the most space.” Only the bottom half of the windows open, which Mindt said is designed to direct the air to your body rather than face.

The exterior also features LED lights front and rear, which have been designed to send signals to pedestrians and other vehicles through light sequences and colours. 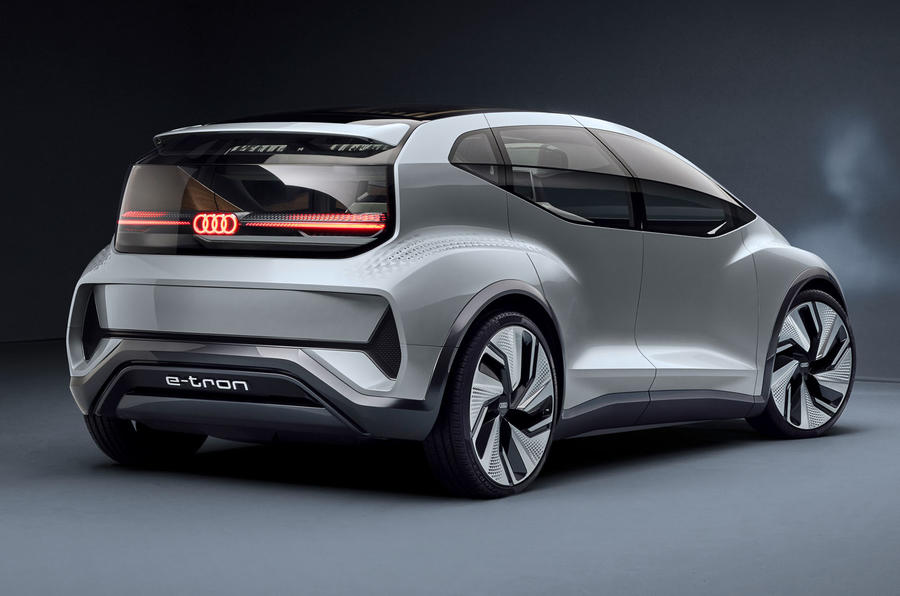 The AI:ME has a 65kWh underfloor battery, which drives a 167bhp motor on the rear axle.

Because the concept is designed to allow for Level Four autonomy, the interior is particularly future-focused, with a retractable steering wheel to maximise space in autonomous mode.

There are two tables for practicality, a food storage unit and magnetic cupholders. A large storage area in the dashboard, along with door cubbies, are open, to reduce the chance of leaving personal belongings in shared cars. 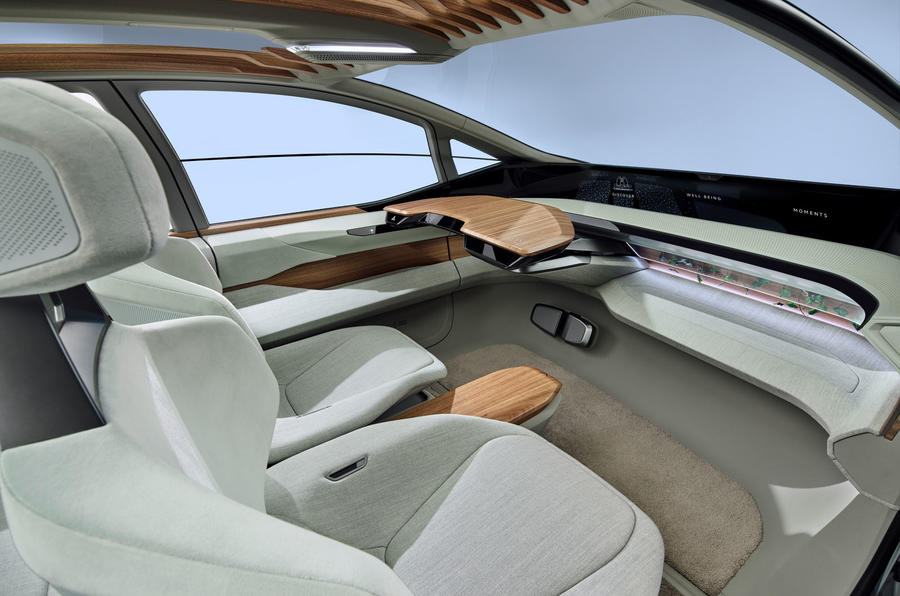 Much of the car’s infotainment and systems are operated through a large augmented reality display, which in autonomous mode can be controlled by gesture or by looking at it, using built-in eye-tracking cameras. The systems can also be operated via touch panels built into the doors.

The interior materials are designed to be soft and tactile, while live plants are built into the dashboard and panoramic roof, to highlight the in-built air filtration system.

Almost made me forget about their jailed CEO, and their continuous commitment to f****** up our health and the environment.

Still, nice looking concept, I can't wait for their next concept car tomorrow.

Almost made me forget about their jailed CEO, and their continuous commitment to f****** up our health and the environment. Still, nice looking concept, I can't wait for their next concept car tomorrow.

Audi has always aimed for a car of the future, an electric concept car was already planned for some time. I am waiting to try one of the best audi audiences in this area.

These VAG articles are

These VAG articles are relentless, aren't they...