Fifth-generation LS is based on same underpinnings as the LC500; new twin-turbo V6 replaces flagship V8; starts from just £110 less than the S-Class
Open gallery
Close

The new Lexus LS luxury saloon will cost from £72,595 when it goes on sale, with deliveries planned from the beginning of 2018.

From base-spec LS 500h cars, the LS range gets automatic lights, a 12.3in infotainment system, 12 speaker audio system, an around view monitor and electrically adjustable seats with 20 modes of adjustment, as well as heating and ventilation as standard. Luxury-spec cars boosts the level of adjustment up to 28 different ways, and also adds a premium sound system, among other technology and comfort upgrades. A host of driver assistance and passive safety systems also come as standard across the range.

The luxury saloon was unveiled at the Detroit motor show with the Japanese manufacturer boldly stating that it expects the fifth-generation car to “reset the luxury benchmark in the same way the original LS did in 1989”.

The new LS, a rival to the Mercedes-Benz S-Class, is based upon a version of the GA-L platform which underpins the well-received LC500. In the LS, however, the wheelbase has been extended from 2870mm to 3125mm. The new saloon is front-engined and rear-wheel drive, with four-wheel drive available as an option.

The new Lexus LS is 5235mm long, 1450mm high and 1900mm wide. Compared to the current LS, the new model sits about 15mm lower, while the bonnet and boot are 30 and 41mm lower respectively, with Lexus’s designers striving for a ‘four-door coupé’ silhouette. 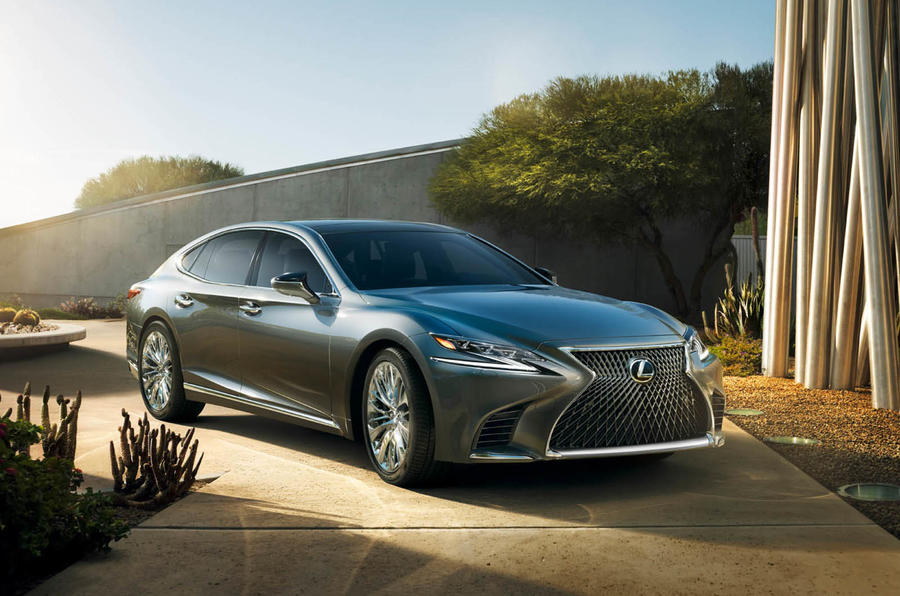 Lexus has put an emphasis on driver engagement. It claims the LS is endowed with “precise handling and direct steering” thanks to its lighter platform, a new engine mounted lower in the car’s nose and enhanced body rigidity.

A new 3.5-litre, twin-turbocharged V6 engine “with the performance of rivals’ V8 engines” has been developed for the LS. It produces maximum power of 409bhp and 442lb ft of torque, channeled through a ten-speed torque-converter automatic transmission, as also used in the LC500. The rear-wheel-drive LS is capable of accelerating from 0-60mph in 4.5sec; Lexus hasn’t revealed the performance of the four-wheel-drive variant.

The Japanese manufacturer’s engineers have made a 90kg weight saving over the outgoing LS and have developed a more rigid multi-link suspension system, with air suspension also available as an option. The air suspension system comes with an ‘access’ function that raises the vehicle and opens the seat bolsters to allow easier ingress.

The LS is equipped with what Lexus calls Vehicle Dynamics Integrated Management (VDIM), a system that oversees control of braking, steering, powertrain and suspension to control and suppress body movement. Handling can be further enhanced by active stabiliser bars and the Lexus Dynamic Handling (LDH) system with independent front and rear steering. 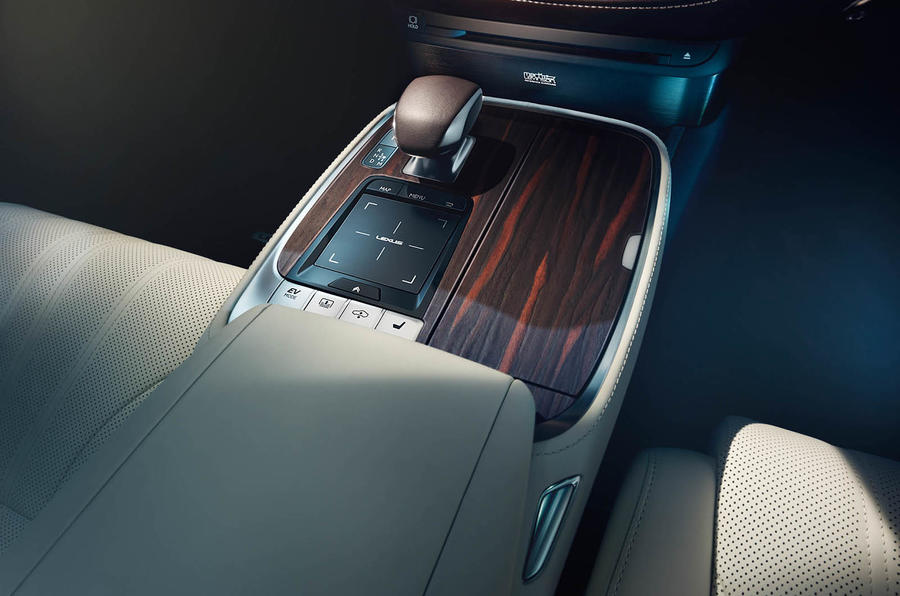 A lower centre of gravity is also critical to the LS’s handling prowess. Most of the mass, including the engine and the occupants, is positioned more centrally and lower in the chassis.

As befits a luxury saloon, the new Lexus LS is packed with assistance, comfort and technology features. The drivers’ seat is adjustable in 28 ways, while the rear seats are heated and powered and both sets of chairs have optional heating, cooling and massage functions.

New sound suppression methods, such as an active noise control system which cancels out engine noise, mean it is the quietest LS yet inside the cabin. 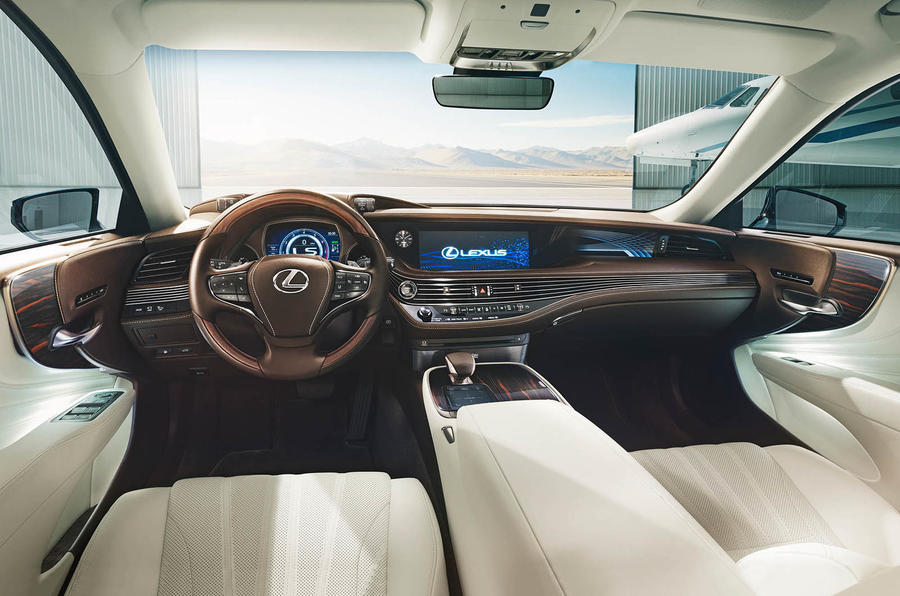 Among the key new safety features is a pedestrian detection system that can automatically brake and potentially steer around the person while staying in the lane.

The Lexus LS will go on sale at the end of this year. As the LC is available with a hybrid powertrain, and the current LS is available as a hybrid, it is reasonable to expect a petrol-electric variant of the new version will follow.

“When you look back at all the generations [it] was pretty conservative. But this is the biggest change. The LS is still a saloon, but it’s changed as much as you can change a traditional saloon.”

The adoption of the dramatic Lexus ‘spindle’ grille is a significant step forward for a car whose previous four generations have possessed stately and diplomatic design.

“The new LS is less formal, much more sporty, more sleek. It’s not a Porsche Panamera, but it’s going that direction compared to a traditional LS replacement,” added Schlicht.

Lexus dealers were shown the car at a global new product preview just before the Paris motor show. Its swoopier styling was said to have been a big hit with dealers.

Lexus will restrict the new LS range to a single four-door body shape, resisting from launching a luxury two-door coupe to compete with the S-Class two-door.

“We have RC and LC – for us that’s a lot of sporty coupés. Working them through and into the line-up will be sufficient,” said Schlicht.

Instead Lexus is more likely to strengthen its line-up of SUVs, said Schlicht: “We would see other SUV developments before we’d see another coupé – that’s my guess. Once the coupés have done their job, we need to further refine the SUV range.”

More immediately, a three-row-of-seats version of the RX SUV is expected on sale in 2017/18, offering a rival to the growing ranks of premium 5+2 soft-roaders, like the Range Rover Sport.

The number of LS sold in the

The number of LS sold in the UK must be vanishingly small. This new model isn't going to help.

The grille has been enlarged to the point of caricature.

The side profile is too generic, reminiscent of the Tesla model S

The interior is not quite a successful attempt at simplicity. A successful simple design relies on the transition between elements being convincing. Here the edge of the dashboard continues onto the door panel in a particularly awkward unresolved way.

Based on what I have read and photos / videos seen, this is a fabulous car in every respect. I currently own a Lexux NX (which I am very pleased with) and have driven very many different makes and model cars over many years.
Beauty is in the eye of the beholder, and for me this is a strikingly good car both visually and technically. Yes, I do like the bold front grill which is seemingly going to be a feature on all forthcoming new models. It will be easily recognisable as a Lexus from both the front and the rear, which is what every car maker wants.
It will be a pleasure to drive and will be extremely reliable I am sure, knowing Lexus's reputation.
From what I have read about its rivals flaws, mainly about Mercedes engineering causing mechanical problems,some having too small an engine to deliver required power, but relying on customers being wowed by comfort and styling, Lexus will extend its loyal customer numbers I am sure, with the increasing range of new models over the coming years.
All I need is for 3 years to pass, to buy the LS 500 at a second hand price, knowing that the previous owner would have looked after it extremely well.
ahaus 12 January 2017

This is probably the first time the LS looks distinctive, sleek and stylish, and a car I would love to own.
The styling is almost coupe-like and resembles a cross between the Mazda 6 and the Porsche Panamera, which is not a bad thing and works very well with Lexus' elegant character lines that doesn't look tortured or overworked like on their other vehicles.

While the spindle grille has been a polarizing Lexus design feature, this version looks more artful and graceful (and probably will look better with a license plate on it disguising its massive size), and the headlights and bumper openings are now better integrated with this pinched grille shape and doesn't look as awkward and forced as before.

This could be the breakout or second coming of the Lexus flagship, as the Audi A8 and BMW 7-series have been so boring and forgettable, the Jaguar XJ while beautiful is long in the tooth and too specific, leaving only the Mercedes S-class the only compelling luxury sedan on the market without venturing into the ultra-luxury segment of Bentley and RR.

The weird Nike swoosh bottom headlight eyelids seen on other models is better integrated into the headlights instead of two separate disjointed elements and hope this design will make it to their other models.