From £88,4009
A mainstream Lexus like no other we’ve driven before: delicate, fun and fast
Open gallery
Close

It’s hard not to stare at the Lexus LC, the latest - and most striking of all - in a series of challenging designs from the firm intended to make lovers and haters stop and ask, “What’s going on with Lexus?” The answer is a not so quiet revolution, and it reaches something of a crescendo with the launch of this sports car-cum-GT, available with V8 or hybrid power.

The root of this wholesale shift from quiet, eminently rational brand to one that is wilfully edgy, even shouty, stems from the ambitions of Akio Toyoda, who you might recall is company chairman, has direct Toyota family lineage and who has made it his personal mission to make his companies more interesting.

Hence for Lexus the appointment of a former chief designer - designer, not engineer, not marketeer, certainly not a spreadsheet jockey - as the boss of the brand, an all-new platform architecture, codenamed GA-L and having its debut here, and the decision to turn 2012's LF-LC concept car, which was created as a styling concept with no production ambitions, into a reality. It’s fair to say plenty of eggs have been broken to make this omelette. 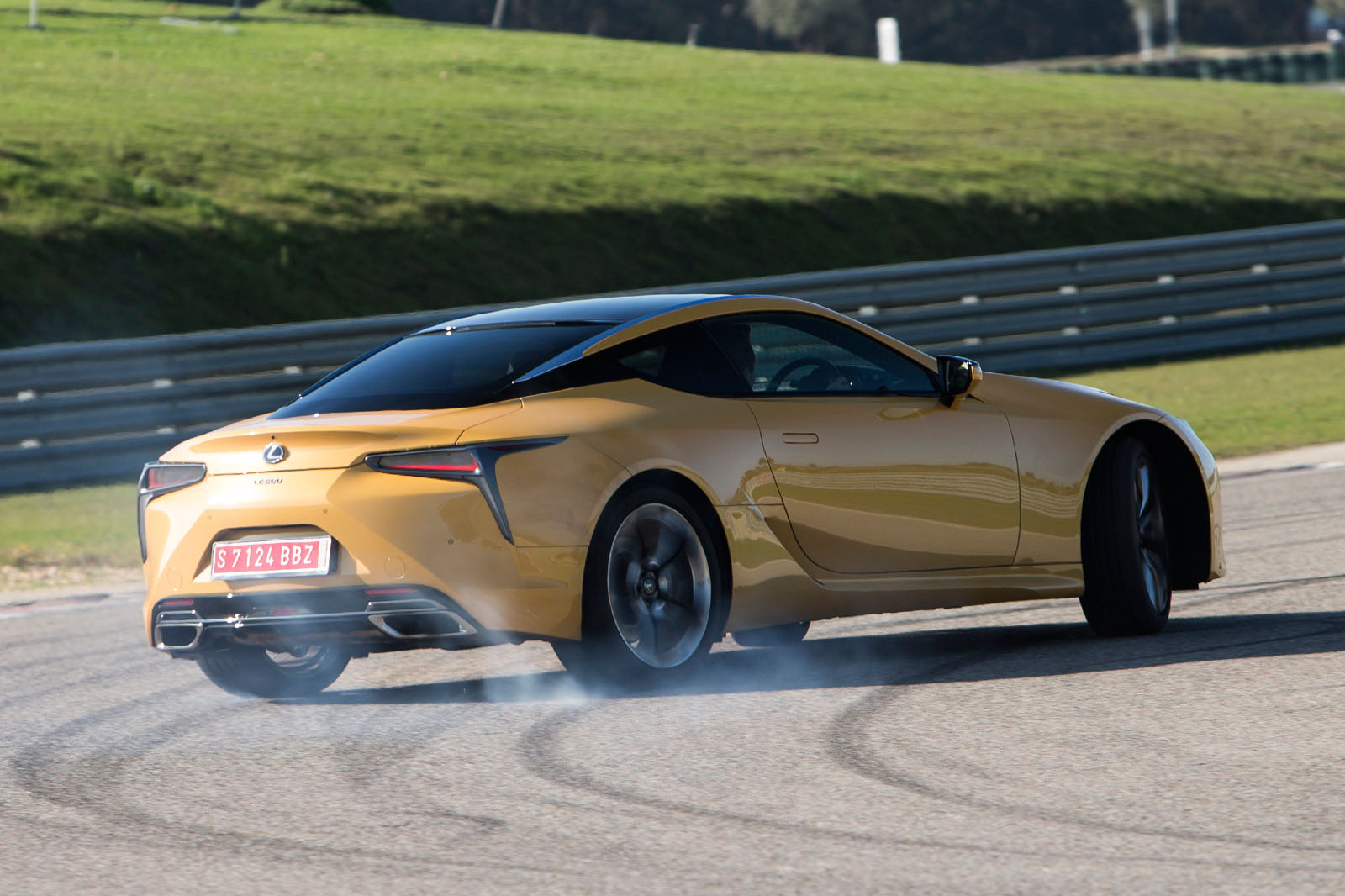 Not unreasonably, that might be a bit confusing; Lexus was, after all, the firm that launched with the Lexus LS 25 years ago, with a pledge to out S-Class the Mercedes-Benz S-Class. It has done a pretty good - if rarely remarkable - job of battling the Big Three Germans over the years, largely on the merits of waftability and customer service. Laudable qualities they may be, and they are not goals about to be abandoned, for a new LS arrives sometime around 2018. But now the time is right to ring the bells and instigate a transformation. The LC arrives now, bosses say, as Lexus has come of age. Henceforth it will have a sportier side to it, too.

The LC is a sports car/GT with a broad remit, aimed dynamically somewhere around the Porsche 911 and Jaguar F-Type, setting its bullseye at top-end versions of the BMW 6 Series, Mercedes SL or, at a push, the Maserati Granturismo. The to-do list determined it should be brilliant fun but drivable every day, even over long distances and, because of those looks and the choice of two very different but equally eye-catching powertrains, and act as a showcase for this altogether different side of Lexus that we’re set to hear more of.

Step into the cabin and the Lexus LC's sportier side is immediately apparent as you drop farther than you might expect into the sports seats, themselves a specific design for this dynamically enhanced Sport+ model. The point is that your hip then sits closer to the height of your feet on the (perfectly spaced) pedals, and as a result, the car’s movement is telegraphed earlier and more precisely to the driver. It's a goal that engineers who have poured their recent years into making the LC a step-change car repeat time and again. 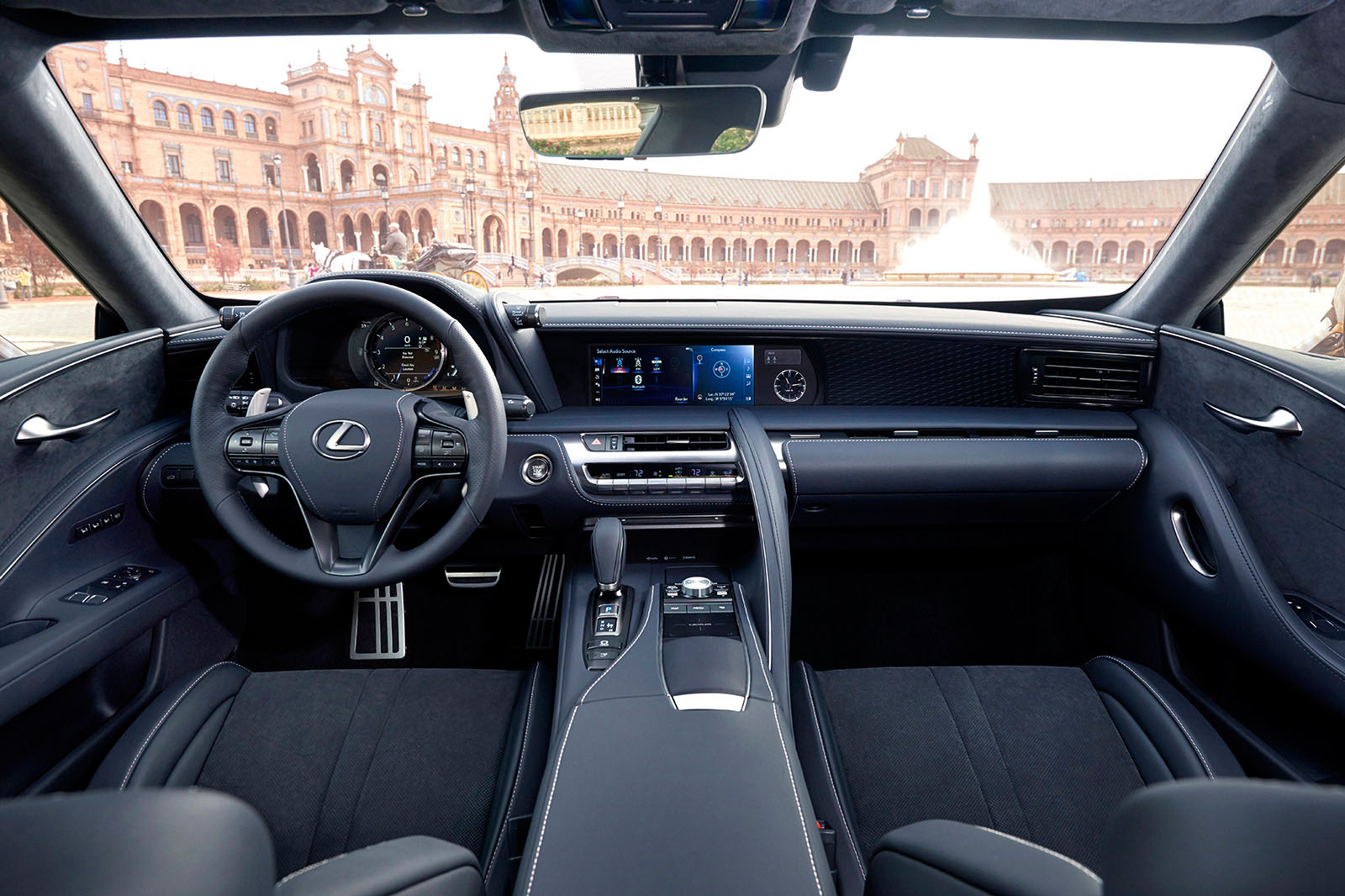 This is not meant to be a white-knuckle driver’s car, but instead one that cossets you whatever your talent by always announcing what’s about to happen, and it’s details such as this that help achieve that goal. The same motivation prompted everything from the material choices and chassis construction through to the suspension settings and more. Lexus wanted ultra-stiff underpinnings, but engineers also wanted the driver to be enveloped by linear, rather than sudden, responses to chassis flex and suspension movement at all times.

The low seating position also benefits the centre of gravity. This, combined with the wide stance, pushed-back engine mounting (so much so that Lexus calls it front-mid-engined) and details such as placing the battery in the boot and doing away with a spare tyre, plus the generous use of carbonfibre composites and aluminium, there has been a relentless focus on keeping weight low down and carefully distributed, 52% front, 48% rear.

Also playing in this Sport+ car’s dynamic favour are the carbonfibre roof (which replaces the standard cars panoramic roof in this and Sport trim) and other key enhancements that are wrapped up under the ‘Lexus Dynamic Handling’ banner, namely a variably geared steering unit that weights up according to speed, rear-wheel steering that aids turn-in and a limited-slip diff that works with the driver aids to keep everything in line.

The result is really rather delicious at pace. This, remember, is a front-engined, rear-drive 2+2 with GT pretensions; it is set-up to understeer but only does so if you really make a hash of things. In normal, fast road driving, there is a delicacy to the steering that’s quite addictive. Aided by the rear wheel movement, there’s a confidence-inspiring sense that the back of the car is moving not only in co-ordination with the front but also to its benefit, which is quite refreshing if you’ve spent time in big-engined German rivals that resolutely let the front end do all the work.

There’s abundant grip and the suspension and diff can handle odd cambers, big, mid-corner bumps and seemingly optimistic throttle applications with remarkable composure, gathering everything up and slinging you on. What is a firm ride at low speed becomes more supple at pace. It brakes quickly and confidently, too, even when you stand on the pedal, and it's just wonderfully easy to find a rhythm. The LC feels alive in a way no Lexus bar the LFA has before. Comparisons with the aforementioned 911 might be over-egging it, but as a BMW 650i or Merc SL rival it has a claim to bragging rights. 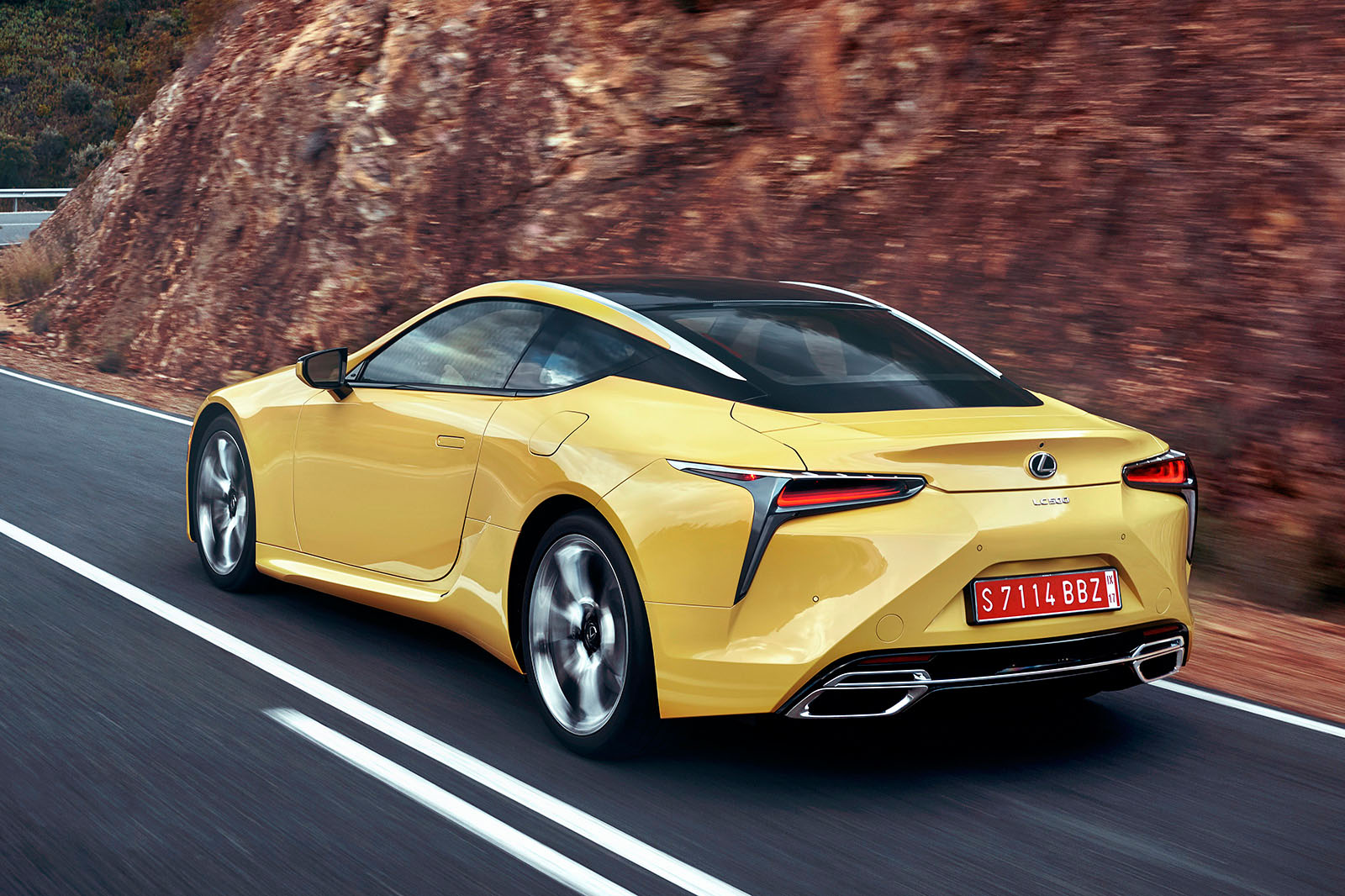 That the chassis is able to eclipse the powertrain should tell you a lot, because - shock - the 5.0-litre V8, a modified version of the unit found in the RC F and GS F, is no shrinking violet. Producing 467bhp at 7100rpm and 389lb ft at 4800rpm, itis predictably punchy but, for all its hairy-chested shove, it doesn’t dominate. In anything below Sport S mode (the penultimate of six settings) it propels you along quickly but with a soundtrack that’s louder than the engine response is fast. Dial it up, though, and everything becomes crisper and progress more instant; Sport is ideal for a favourite road, offering a beguilingly immediate response, with Sport S +, when everything dials up or off, best left for the track.

The secret - or perhaps surprising - weapon in its armoury is a new, 10-speed direct-shift gearbox. On paper, it sounds like a nightmare that will leave the auto-shift sensors scrabbling around wondering where to go. In reality, it changes swiftly and decisively and does a great job of keeping the engine in its sweet spot between 4000 and 5500rpm when you’re licking on. Crucially, it’s the first six gears - and chiefly third to sixth - that do most of the work, the additional ratios only playing for the benefit of refinement and economy at consistent cruising speeds.

The gearing is evenly spaced, so it promotes a rhythmic flow to progress that merges beautifully with the engine and chassis capabilities to inspire the confidence - again - that this car is on your side. Of course, you can also operate it manually via wheel wheel-mounted paddles, but getting to a point where your brain can calculate what to do more effectively than that of the car is not the work of a moment.

You could buy the LC on the basis of everything written above and not have a single regret, but there’s more to it than that, some good, some to think about. Like the exterior, the cabin is an acquired taste, from its flamboyant inner door surrounds to its button-laden steering wheel and fussy touchpad control for the infotainment system.

The materials and finishing are top notch, as is the gadget count and quality of flourishes, such as the TFT screens, analogue clock and sound systems. That huge amounts of effort have gone into its finish is not in doubt; that it will be to everyone’s taste perhaps is. Likewise, like many sports GTs, space is tight for four, even if two of them are kids. As ever, try before you buy.

It would be surprising if any of the potential niggles mentioned above were enough to make you lose interest in the LC - not least because it's the sort of car you're likely to want  (or not want) long before you reach a showroom. And if none of those niggles bother you, or if perhaps you have fallen in love with its styling, then the case for considering an LC is hard to ignore.

The LC is a triumph, in the way its makers intended and many more than you might have expected. The OTT design may forever be divisive, but few enthusiasts will be able to take issue with the fundamentals of this quite surprising and highly entertaining car.

The headlight details could

The headlight details could be better, and I'm not keen on the cut-out in which the rear number plate is located, but overall the styling is pretty good. They really need to make all the interiors tan, it looks so much better than the all grey version. Or at least get some of that yellow paint in there to liven it up.
80sXS 9 December 2016

good, drive, better looking better on quality, build, reliability, dealer service than anything that comes out of Germany
View all comments (15)