BACK TO ALL NEWS
Currently reading: VW emissions scandal: the Volkswagen owner’s opinion
UP NEXT
Hyundai i20 N targets Fiesta ST with 201bhp

Touran owner Jonathan Mudd describes his experience since his car was identified as affected by the emissions scandal.

My positive experiences with an 08-plate Volkswagen Passat TDI Highline led me back to my local Volkswagen dealership in December 2013 to purchase a Touran SE TDI Bluemotion — a legacy of needing more cabin space with child number three on the way.

I was a happy customer. Then the news of the emissions scandal broke and my opinion of the VW brand has been shrouded in disappointment ever since.

For starters, it was almost impossible to comprehend the scale of the problem that had been uncovered. But, more important, I was pretty cheesed off that my car’s EA189 engine — bought outright with my hard-earned cash — was almost certainly affected by the NOx emissions cover-up.

Such was VW’s seemingly apologetic attitude in the days and weeks after the news broke, I expected the brand to be on the phone almost immediately to explain what had happened and how the situation was going to be fixed.

But it didn’t happen. I only received my first communication (by way of a letter) in December 2015. After loosely explaining the situation that had been uncovered, it went on to say that VW expected its “engine solution” to arrive in the “second and third quarters of 2016”. I then received another holding letter earlier this year — but it didn’t contain precise details of when my car would be called in to be put right.

I had hoped VW would have leapt into action much faster by apologising to its customers with the sincerity and speed I thought was appropriate, as well as clearly mapping out a plan for how things would be rectified. Instead, the little communication I’ve had has, in my opinion, been nothing more than a basic box-ticking exercise.

And when I read online that the chair of the transport select committee said VW “acted cynically” to cheat emission tests and that “Volkswagen’s evidence to us was just not credible”, it only added to my anger and frustration.

As I write these words — 12 months after the scandal broke — I still don’t know when my Touran will be fixed.

In signing off his letter that I received in December 2015, VW director Alex Smith said: “Our sincerest hope is to regain the trust you placed in us when you chose your car.”

Based on what I’ve heard from VW so far, the prospect of that happening is a million miles away. 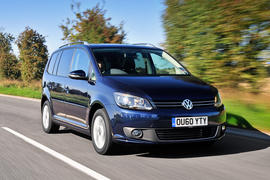 Thanks for the update

12 September 2016
Anyhow, might I suggest before having your car 'adjusted' accurately record your mpg. Just to see if there's a difference post fix. Actually as your car is coming up to 3 years will the MOT station record the NOx levels? that would be another interesting comparaision.

12 September 2016
Well, I am an owner of one of the effected vehicles and you know what, I couldn't care less, it hasn't effected me at all in any way shape of form, if anything I have benefited from it because my road tax bill will not be going up to what it probably should be so as far as I am concerned I am quid's in! I don't expect any compensation either because ultimately I have a vehicle that works perfectly fine and the only people who are effected by it are the green army who would have us all driving round on horseback if they had their way!

12 September 2016
Volkswagen's intransigence hurt Jonathan but not every one thinks like that. My father in law drives a 'Darth Vader'. He does not care his car emits 40 times more toxic emissions than claimed. Or that the car maker lied. To each his own.