BACK TO ALL NEWS
Currently reading: Volvo: Lockdown has changed car sales forever
UP NEXT
Mercedes-AMG GT Black Series on sale at £335,000

Circumstances forced brands to speed up their transition to an online retail model, which will have a lasting impact
Share
Open gallery
Close
Share story

The push to expand online car sales services due to the Covid-19 lockdown will change the way new vehicles are sold forever, according to Volvo’s UK boss.

Registrations of new cars were virtually halted after the UK government’s lockdown rules forced dealerships to close in mid-March. Showrooms were finally allowed to open in England on 1 June and Northern Ireland on 8 June. There is still no firm date for when showrooms in Wales and Scotland will be allowed to open.

With dealerships closed, car firms and dealers attempted to maintain some level of service for customers by expanding current online services. Volvo UK, for example, accelerated enhancements to its existing online sales service, launched a ‘click-and-collect’ service and brought forward the full launch of Volvo Valet, a contactless collection and delivery option for cars that need servicing or repair. 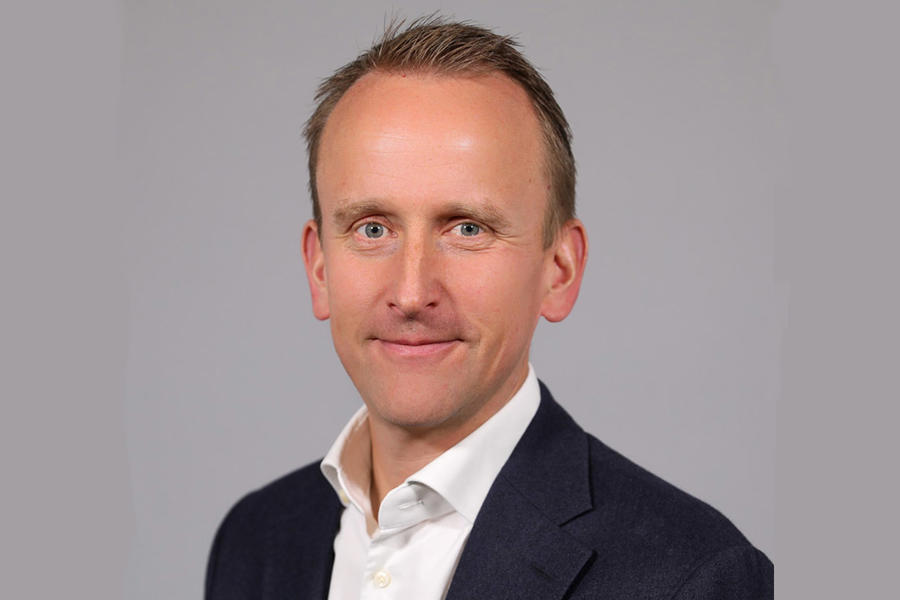 “What we’ve done in terms of actions to tackle the coronavirus has essentially been two years’ worth of digital development in just eight weeks,” said Volvo UK boss Kristian Elvefors. “Despite the lockdown, we decided not to furlough many of our staff to make sure that we could keep a lot of people working on new developments that would help us keep customers interested and really help when it was time to restart.

“These are trends that we’ll see going forward. We’ll definitely see more of our operations move online in the future. We’ve learned so much working digitally which is going to be game-changing.”

Asked whether the online sales service has helped push sales during lockdown Elvefors said: “It has, and I’m sure that approach is here to stay now. Even with dealerships opening, the social-distancing rules are likely to limit demand, and there are people, such as those on high-risk grounds, who will be unwilling or unable to visit. So we need to make sure we continue to help them.”

“For us and the whole car industry, online sales are here to stay. The big challenge now is to offer all customers the same journey by whatever method they choose. Whether you’re at home or in a retailer, the approach should be omni-channel, with customers able to switch from online to offline and receive the same experience. That’s a big challenge to introduce, but it should become the norm.”

As well as new systems to aid new and returning customers, Elvefors said Volvo also “helped our dealers do whatever it takes to be online”. He added: “We developed material such as videos, e-learning training and PPE guidance for our dealerships to do what we can to keep them running and be prepared as possible for showrooms to open.”

Elvefors said Volvo UK will also embrace greater levels of flexibility and remote working now, based on “how much we learned working digitally” during lockdown.

He added that he has been impressed with the innovation shown by dealers in preparing to reopen, which began with service workshops opening. “We took a staggered approach, getting sales people working even before showrooms opened so they could call customers to set up deliveries or book in test drives,” said Elvefors. “I was really impressed by what our retailers did to be ready.”

Elvefors said he agrees with industry forecasts that the UK market won’t fully recover the sales lost from the lockdown period this year and is uncertain about June sales, given the likely reluctance of customers to visit dealerships when first open. But he is hopeful the second half of the year could be stronger. 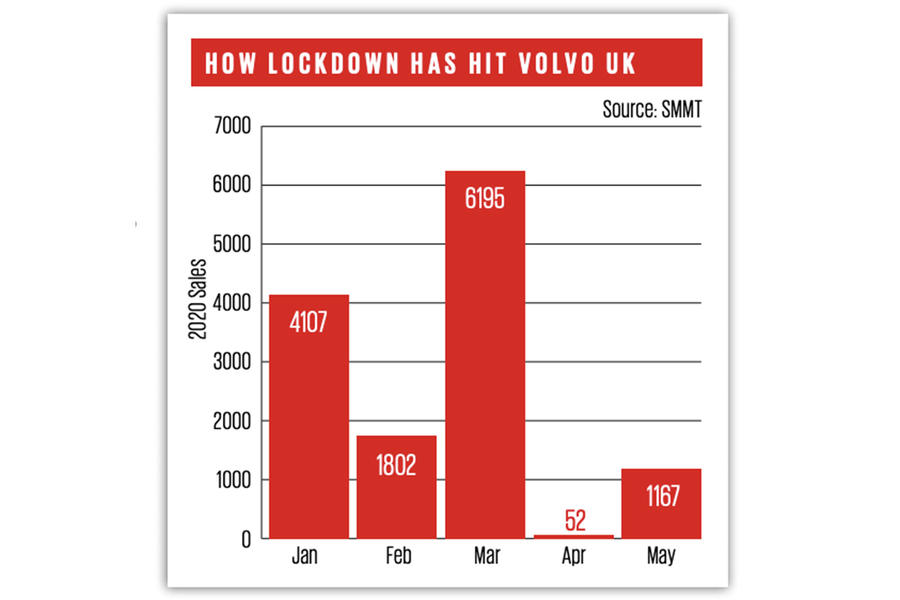 “There should be a significant increase in Q3 and the rest of the year,” he said. “We’re confident customers will come back and there are many who will need a new car.

“It looks like it’s going to be a stay-at-home, stay-in-the-UK summer, with people having their holiday here, and that may help us because people holidaying in the UK may need to buy a new or used car.”

Volvo UK’s 2020 fortunes should also be buoyed by sales of the new XC40 Recharge Plug-In Hybrid T5, which was due to roll out to dealerships as the lockdown came into force. The full-electric XC40 Recharge P8 has also gone on sale, with deliveries due to begin early next year.

Seat UK not convinced of demand for online car sales 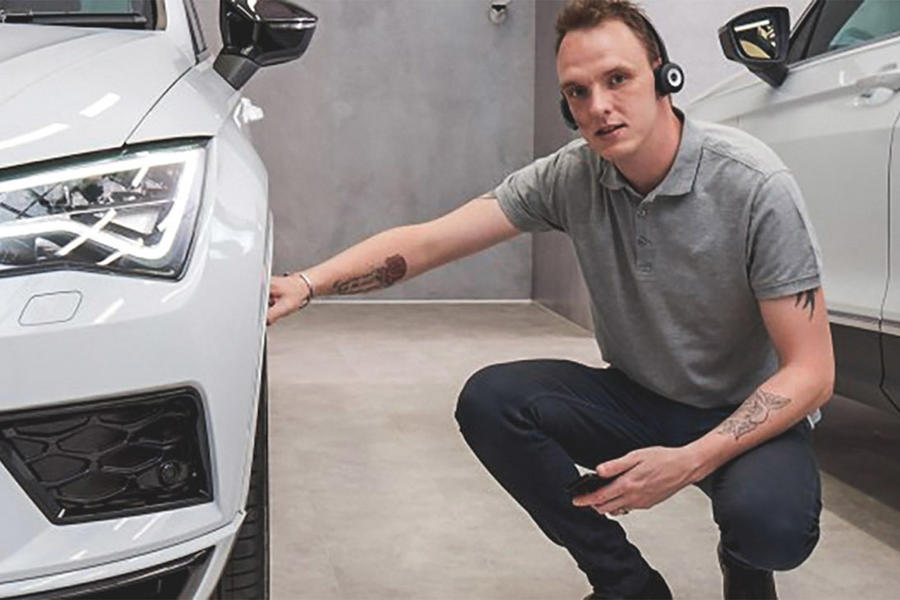 Not every car manufacturer believes that there is demand for a switch to online sales in the immediate future. Seat’s UK boss, Richard Harrison, said that although the firm has launched some digital services, there has been limited take-up of online sales.

Seat launched online sales capacity at stores located in the Lakeside and Westfield White City shopping centres, in Essex and west London respectively, but Harrison said demand had been “remarkably low – less than 1%.”

He added: “Buyers really value the human interaction, much more than being able to buy online.”

Harrison said Seat UK has developed a Live Showcase ‘virtual showroom’, where customers can be shown around a vehicle to help inform their decisions before they head to dealerships.

Although but the £54k XC40 won't help increase Vovlo sales significantly, plus I get the feeling from reading this Volvo have nothing new in the pipeline. Good to see no mention of the dumb subscription service Volvo spouted on about a couple of years ago that I slated.

The evidence would say otherwise.

Given that Volvo's are far more popular and cheaper than Tesla, then if Volvo have online sales were in place, how come Tesla became best seller in April? In fact, according to the SMMT figures, the top 10 best selling cars in the UK during April did not include any Volvo and when you consider that number 10 position was filled by Peugeot 308 in which just 67 cars were sold, it begs the question how many cars did Volvo sell?

I'd have thought those stats would have been very worrying to Volvo's online sales.

They seriously think someone like me is going to pay full list price on something like a Volvo? I've bought 3 Volvos in the past using the old method, I'll never buy one using the new.

The big question missing from the interview is can you make an below full price offer on a new car via the internet, this is something that could send dealers into a tailspin

Don't you just go to a car broker online and see what price they come up with, then go round a few local dealers and see if they can beat it? Isn't that the best way to ensure the most competitive deal, if you must buy new?

No local showrooms in their ideal world

Don't you just go to a car broker online and see what price they come up with, then go round a few local dealers and see if they can beat it? Isn't that the best way to ensure the most competitive deal, if you must buy new?

Absolutely. The problem being Volvo want to do away with or at the least reduce the number of local dealers which is the whole point of wanting to expand online, to reduce overheads.

There's another issue of course. I usually keep my eye out for any bargains that crop up and I've seen a few what look like very good deals over the past month. As soon as the garages opened last week, they'll all been reserved. That would seem to put another nail in the coffin of those who believe "the future is online".

There is obviously a market for it, just like online groceries, but when the supermarket van arrives and you find what you ordered has been substituted with something you don't want, or like Dobbies Garden Centre who seem to have a list full of complaints from people who ordered plants based on beautiful colourful pictures only to find something resembling dried weeds to arrive!  Online sales has its advantages but I'm struggling to ever see how it's going to impact the traditional showroom. I've been buying cars since the late 70's and in 40 years, that traditional showroom hasn't changed one bit. They're smarter and the coffee is nicer, but I can't see it changing much in the next 40 years either.

Sorry, I meant to say

I meant to say, they've all been reserved and not they'll all be reserved.

I do wish IT would provide some Edit functionality for these comments.

I love online shopping as much as anyone else, but cars are up there with furniture and houses in the list of "things I won't buy online". I want to be able to see, test and feel out the product to see if it's right for me before committing a massive chunk of money towards buying it.

Above all, buying a car in person means I can haggle with the dealership to get a couple of grand knocked off or score some useful freebies. It's a lot harder to haggle with a manufacturer's web application.